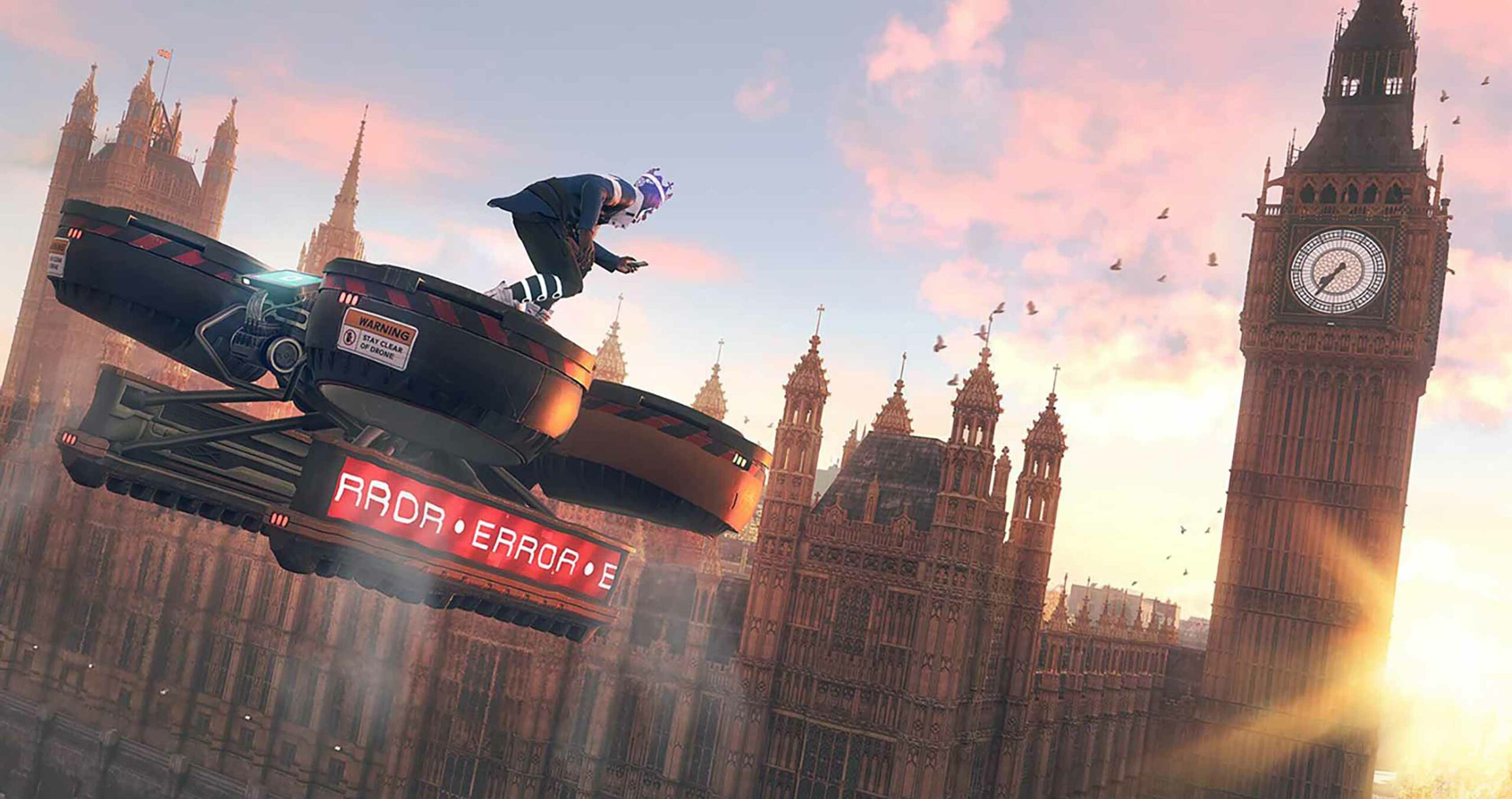 Playing as multiple characters in a video game is hardly a novel concept, especially in party-based role-playing games. In fact, you could even argue that letting you assume the roles of many different characters is one of the most unique and appealing aspects of the medium.

But what about a game where you can play as anyone? That’s the elevator pitch behind Ubisoft Toronto’s new open-world hacking game, Watch Dogs: Legion. Where 2014’s Watch Dogs had you play as vengeful uncle Aiden Pearce and 2016’s Watch Dogs 2 put you in the shoes as charming hacktivist Marcus Holloway, Legion lets you recruit and control any non-player character (NPC) — outside of a select few static key figures — in its virtual depiction of a near-future London.

While this is an incredibly ambitious foundation to base an entire game on, Ubisoft Toronto has overall managed to capitalize on it to create a wholly unique and engaging open-world experience.

Come one, come all

First and foremost, the ‘play as anyone’ conceit beautifully ties into the central narrative. After a thrilling James Bond-esque opening infiltration mission, returning Anonymous-esque Watch Dogs series hacker group DedSec is framed for a series of bombings across London. In response, private military company Albion steps in to clean up the mess and maintain order by turning the city into a surveillance state.

This is where you come in. Ostensibly, you are DedSec, and everyone in London is someone you can enlist to help liberate London. It’s a brilliant premise that leads to some of the most intricately connected and rewarding gameplay systems that I’ve ever seen. 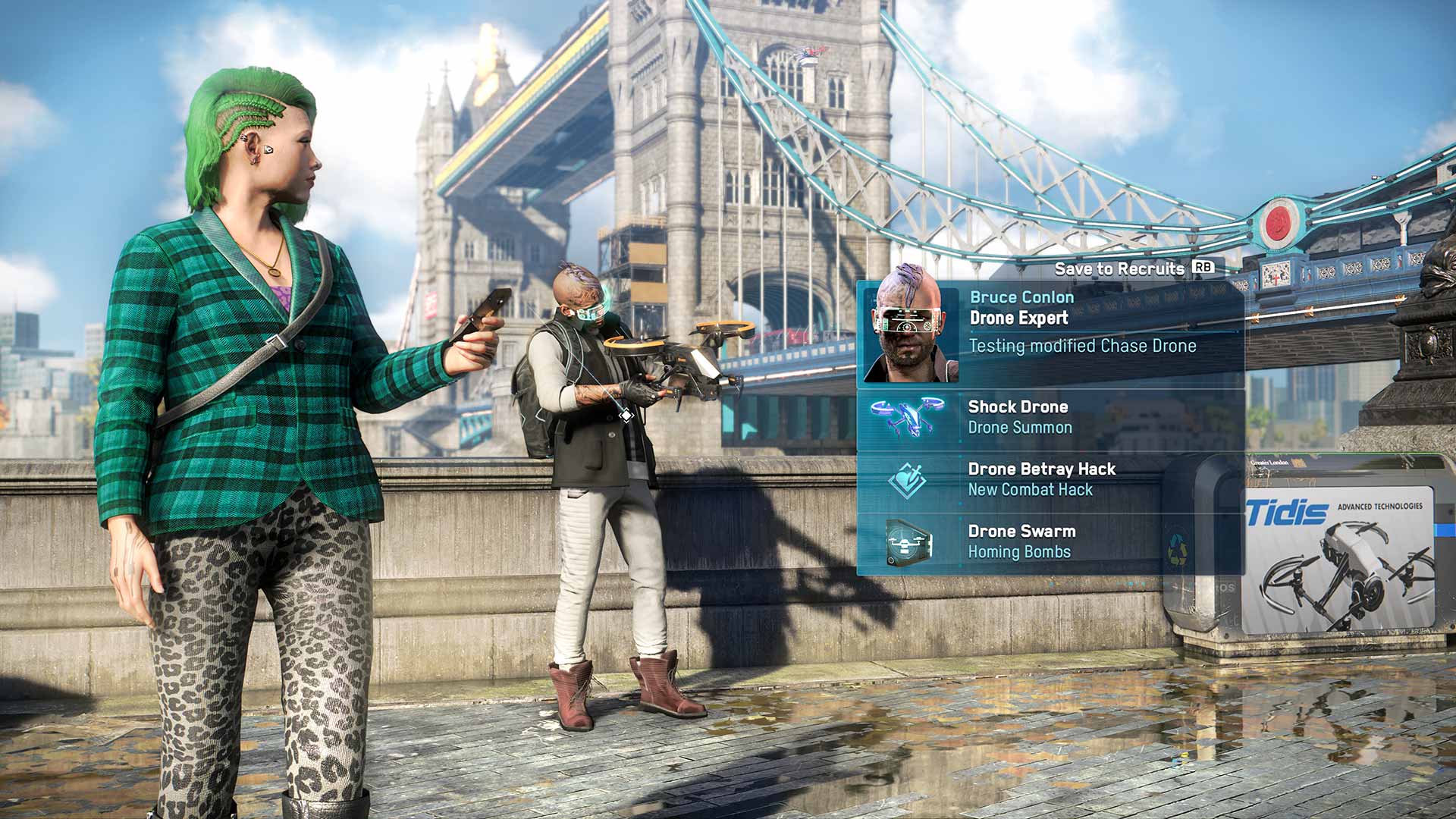 In Legion, every character is assigned a random backstory, miscellaneous traits and abilities. Altogether, Ubisoft says there are least nine million permutations. This allows for your typical sort of characters, like a rough-and-tumble Guy Ritchie brawler and nerdy guy with gadget expertise, to incredibly amusing and unique people like a hacker grandma. What this all means, basically, is that the entire world is effectively a chessboard and you control all the pieces. At surface level, Legion‘s recreation of London is incredible, featuring the typical attention to detail you’d expect from a Ubisoft open-world bringing a real-world location to life while also featuring enough futuristic-looking vehicles, holographic advertisements and anti-Albion propaganda to feel original.

But what I most enjoyed during my bouts of virtual tourism was coming upon new recruits who I could tackle quests with. There’s a persistent and oh-so-sweet feeling of discovery in Legion, as I would continuously come across recruits with valuable abilities and intriguing character-specific backstories. Ubisoft Toronto has talked about developing complex new technologies to generate all these radically different characters, but seeing it in action is another thing entirely.

As an example, one story mission had me break into an Albion office building, so I knew to expect a heavy enemy presence. At the time, I felt like taking a more head-on approach, so I played as Patricia McNeish, my professional assassin who can use the special ‘gunkata’ skill for instant John Wick-esque gun takedowns (see below) and passive ability to deal extra damage to Albion enemies. Of course, this is Watch Dogs, so you can also use your phone to mix in mid-shooting hacks to raise up panels for cover, lock doors or — with the right upgrades — even stun enemies. To make it even better, I could customize Patricia with a black suit from one of many radically different clothing stores to make her actually look like Keanu Reeves’ iconic cinematic badass.

Alternatively, such a potentially heavily-armed area might entice you to play stealthily. In that case, I could simply switch over to Cindy Turner, my 57-year-old hacker with the ability to steal electronic keys from any range and electrify enemies remotely via a hack. My favourite thing to do in stealth — which is possible in most missions outside of indoor areas — is to hack a nearby cargo drone that I could use to reach higher areas/reach the ground safely to avoid enemies entirely.

Moreover, you sometimes may even just decide to dispatch certain Albion guards non-lethally to recruit them down the line. Overall, this particular operation was a fairly standard infiltration in terms of mission design, but Legion‘s rich character mechanics made it feel unique and memorable to me.

Walk a mile in someone else’s shoes

While the ability to recruit might sound overpowered on paper, Legion‘s operative system is finely balanced in its execution, as many of NPCs you’ll pass by in the streets will simply have one or two fairly generic abilities, like being able to steal more money by hacking ATMs. With regards to more powerful recruits who carry several abilities like Cindy or Patricia, it will take more effort to get them on your team.

In the case of the former, I had to perform a few story missions to unlock her along the way. Patricia, however, came after I cleared out a borough from Albion control by disrupting propaganda, taking incriminating photographs and more. These smaller actions culminated in a larger side mission that had me working with the locals to sneak into an underground prison, using a remote-controlled drone to light my path in a surprisingly clever mini environmental puzzle. 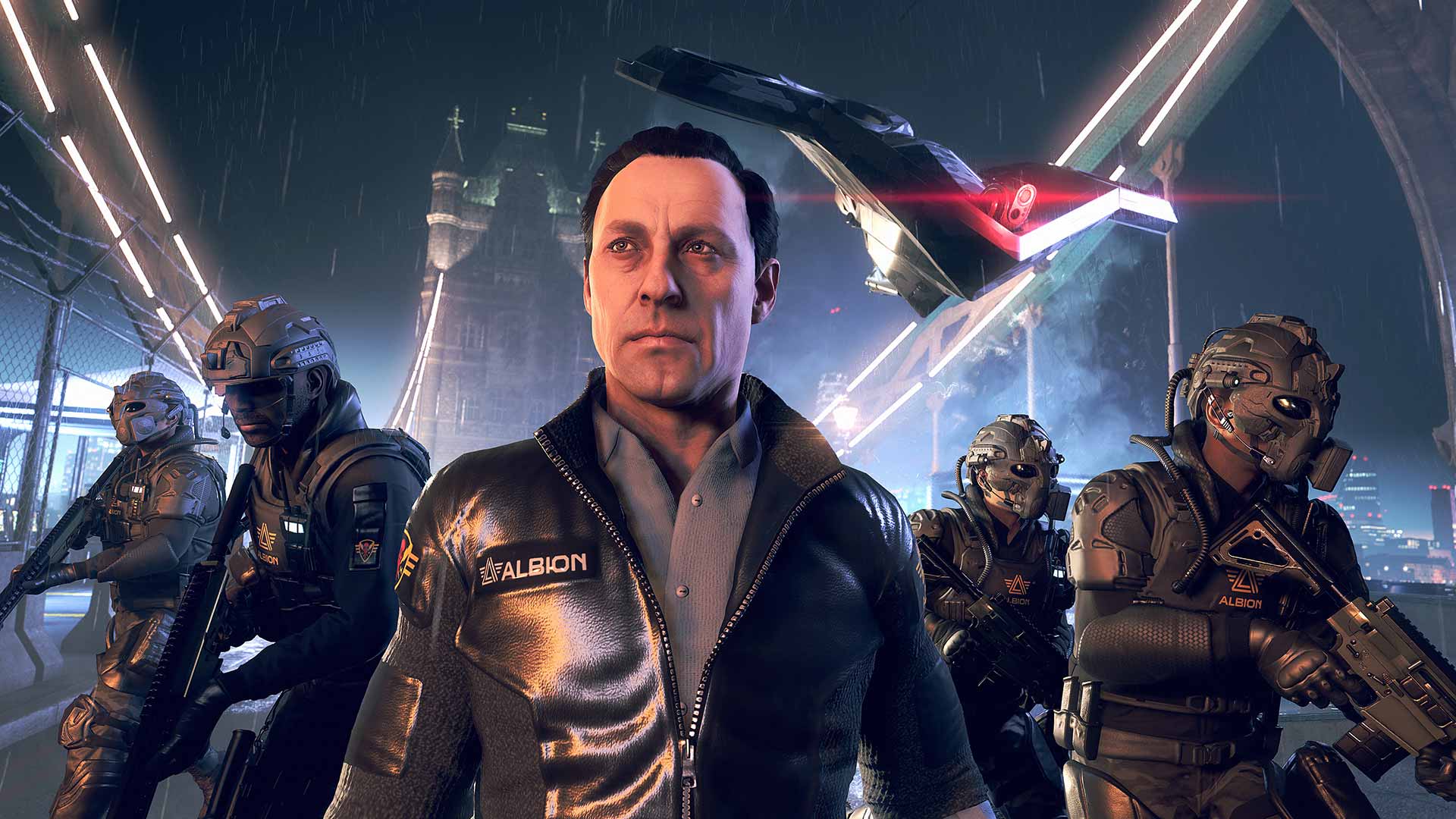 In other cases, your actions with one character can directly influence another. Take bare knuckle amateur Joyce Michaux, who had the Grappler ability to break through enemies melee guards more easily. I came into contact with her inadvertently after joining an underground fighting ring in a side mission for DedSec’s handy AI assistant Bagley. To my disappointment, she disliked DedSec due to a car accident attributed to the organization, so I had to read into her bio to track her down and, as it turns out, win her over through a round of darts to get her to open up her recruitment mission.

Meanwhile, the recruitment mission for Jennifer Chakraverty — a lawyer with the unique ability to bail out my operatives if they get arrested — popped up on my radar simply by removing the handcuffs of her brother, Amal, who I happened to find in a protest area while on another mission. It’s a surprisingly organic means of opening up new recruits that guarantees you’re always going to find new persons of interest.

If you want to ramp up the difficulty, you can also choose to enable permadeath, so your operatives can die and be removed from the game entirely at any given time. I personally loved the added sense of stakes that this added. Still, even then, it’s a fair system, since your characters will sometimes only be injured in non-lethal encounters and be forced to remain inactive at a hospital for a set amount of time. In cases like this, recruiting a paramedic or other medical professional can actually reduce your wounded operative’s hospital stay, which is a wonderfully clever way to have your characters help one another. All the while, Legion smartly offers you the option to save any NPC in your list of potential recruits so you can track them down later, should you be in the middle of a mission or another activity. 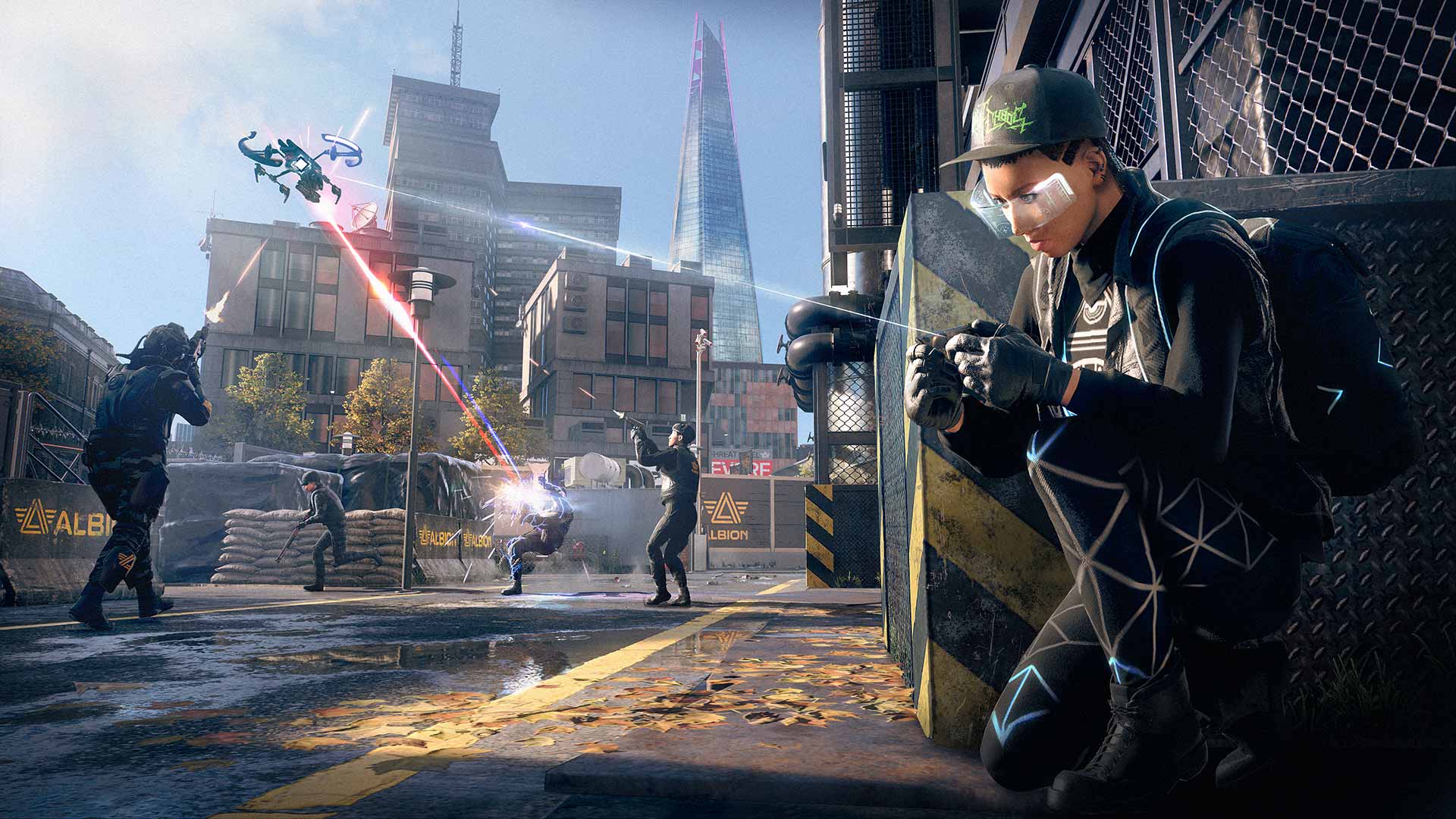 The only real area where Legion comes up short is in its story. To be sure, the core narrative threads offer some apt commentary on depressingly real subject matter, like privacy in a technological age and how immigration can be used to sow conflict. All told, the overarching story feels like a well-constructed, longer-running, bigger-budget season of Black Mirror.

However, the plot does sometimes fall into rote open-world trappings, with the game’s structure being divided into having you take down multiple Albion-related figureheads without too much interstitial material to connect these individual story threads. In this way, it feels tiredly similar to several other Ubisoft titles, especially Far Cry.

Further, the lack of a central main character means there’s often an emotional disconnect between you and the story. It can be hard to feel invested in what’s going on when you’re switching between a multitude of characters who serve more as avatars than actual three-dimensional people. The few pre-defined characters you come across are likewise not very well fleshed out. That your witty AI Bagley — an otherwise disembodied voice without any real depth — is usually the most likeable character is fairly disappointing.

A hero can be anyone 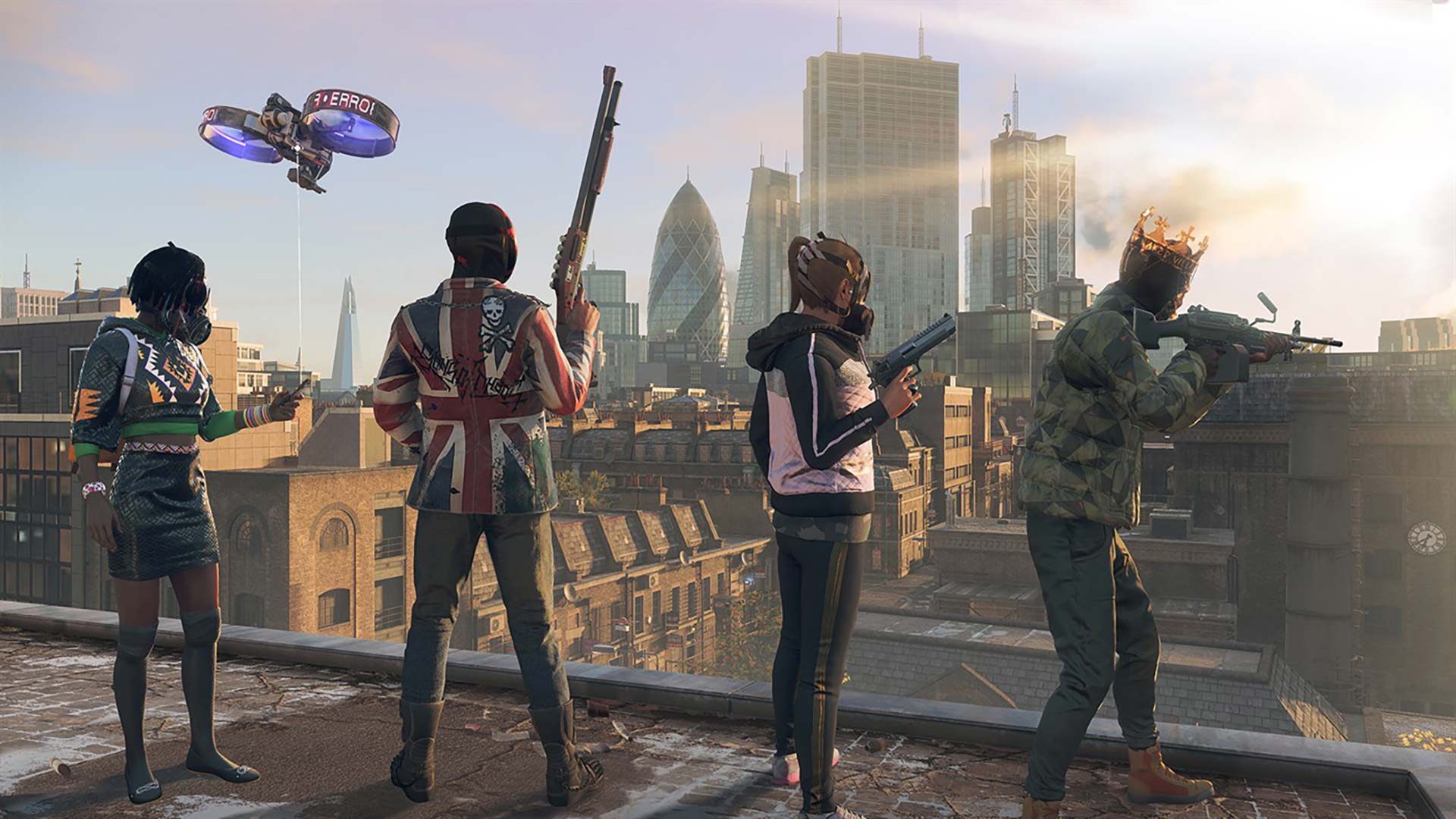 In many ways, Watch Dogs: Legion is the truest realization of the term “sandbox game” to date. Through impressively layered gameplay systems, Legion allows you to interact with its stunningly well-crafted London in various ways that are all driven by your actions. While the central narrative and characters sometimes fail to keep your attention, the real story hook is the one you yourself create with a team that you’re constantly evolving over time. This is one resistance you’ll definitely want to join.

Watch Dogs: Legion will launch on PlayStation 4, Xbox One, PC and Google Stadia on October 29th.

Note: Watch Dogs: Legion‘s online multiplayer component will be added via a free update on December 3rd. Additionally, Legion is one of several Ubisoft titles that will support a free next-gen upgrade path, as well as cross-progression. This means that you can buy Legion on PS4/Xbox One and receive the game and any prior saves on PS5/Xbox Series X and S at no additional cost. Finally, Legion is optimized to run at 4K/30fps with ray-tracing on both the PS5 and Xbox Series X, on top of benefiting from reduced load times on those consoles and the Xbox Series S. Therefore, I plan to revisit the game once I get my hands on the next-gen consoles and the online modes and update my impressions accordingly.