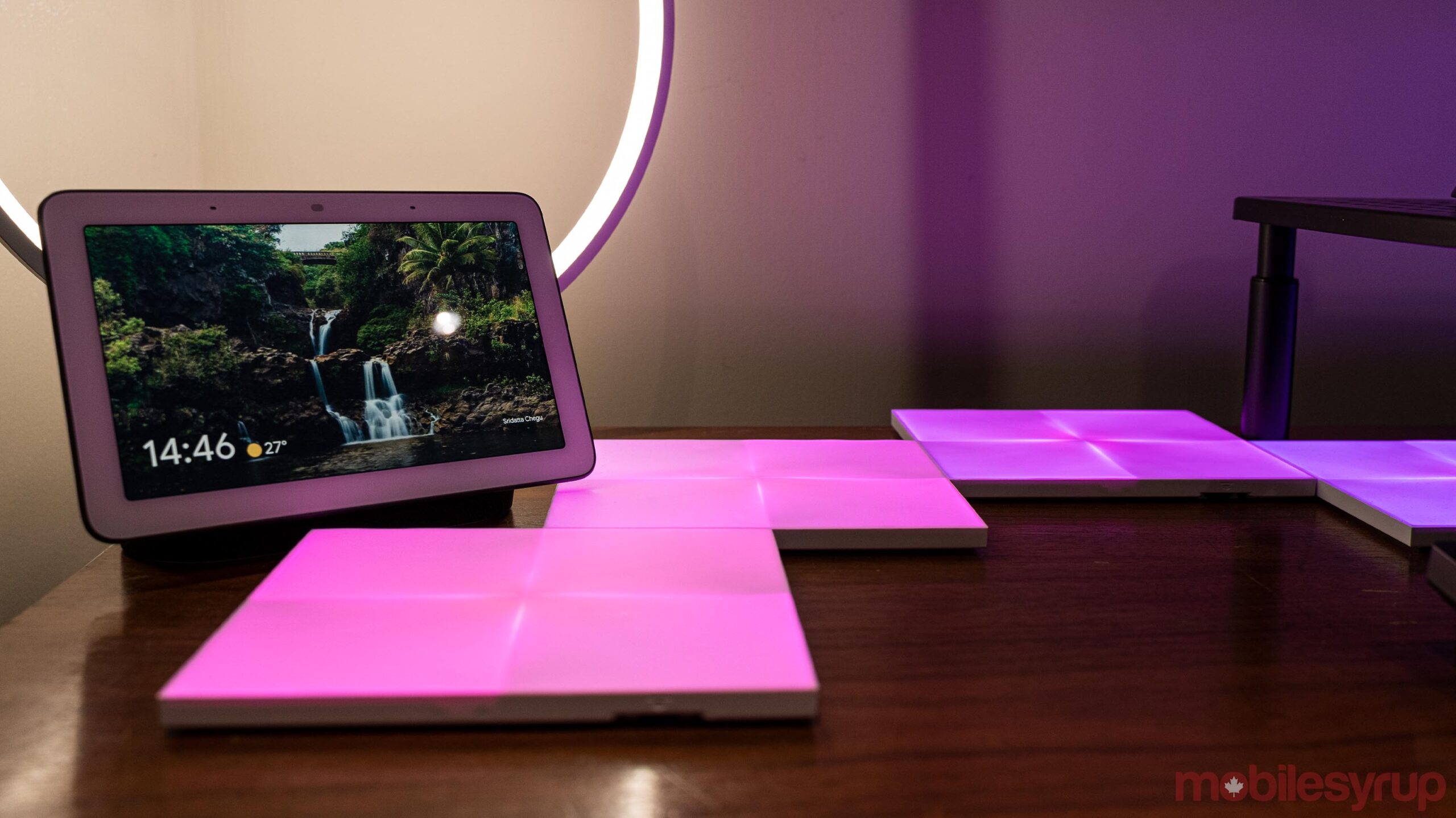 There are a variety of smart light companies out there, but few make devices as interesting as those from Toronto’s Nanoleaf.

The company recently sent over both its ‘Canvas’ and ‘Light Panels’ products for me to test out and I was quite impressed with the versatility on offer. For those unfamiliar with Nanoleaf, the company makes smart lighting panels in various shapes and sizes. These panels can connect together and light up in several different colours and patterns.

Canvas panels come in 15 x 15cm squares while the Light Panels — previously called ‘Aurora’ — are triangles with roughly 23.5cm long sides. Both support Nanoleaf’s cool new ‘Screen Mirror’ feature, which lets you connect the panels to your computer and have them mirror the on-screen colours. In fact, both products are very similar aside from their shape, but we’ll dive more into the differences down below.

To start, setting up either the Canvas or Light Panels is a rather simple process. In both cases, you’ll need the smartphone app — it’s available on iOS and Android for free. Once installed, follow the steps in the app to complete the pairing process. In my case, I needed to check the back of the panels for a code number and type it into the app.

Oddly, when I tried the process on iOS, it wanted to scan a code on the panel instead of manually typing in the number. No matter how hard I tried, the app refused to scan the code. I was eventually able to add it manually, but the overall process was quite frustrating. Once paired, however, the panels worked well. 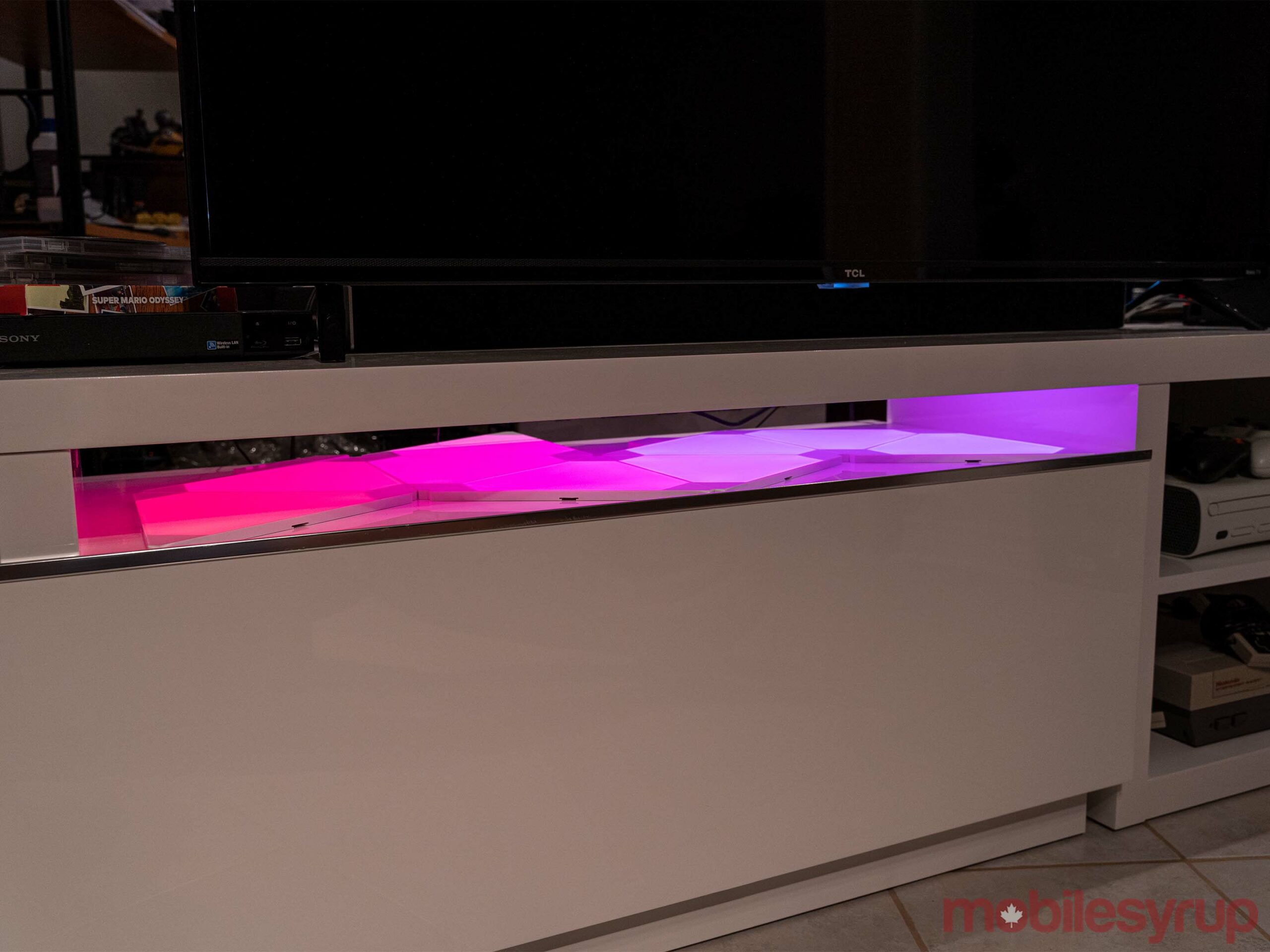 If you’re trying to decide between one option or the other, it’s helpful to know the differences. Aside from the shape and size, the biggest differentiator is the included smart features.

The Light Panels on their own are a little ‘dumber’ than the Canvas panels. They connect to your Wi-Fi network so you can fully control them from your smartphone. However, that’s about the extent of what they can do. On their own, the Light Panels have a power switch and a toggle button to cycle through different ‘Scenes.’

Additionally, the Light Panels include a ‘Rhythm Module’ that allows the lights to react to music. If you’re curious to know more about the Light Panels, check out MobileSyrup’s prior coverage.

Canvas, on the other hand, are a little bit smarter. They include a built-in ‘Rhythm Mode’ that reacts to music instead of a separate module like the Light Panels. On top of that, the Canvas are touch sensitive and the ‘base’ panel includes a set of buttons.

The buttons allow users to control the panels by increasing or decreasing the brightness, shuffling through Scenes and enabling the Rhythm Mode. I also found the Canvas to be much more interesting in terms of layout. Because of the way the links are positioned on the Canvas squares, you can achieve more unique designs compared to the Light Panels, which were more restrictive.

That said, the Light Panels are bigger and less expansive, so it’d be easier and cheaper to cover a large area with those compared to the Canvas.

Screen Mirroring and other features make for exciting spaces 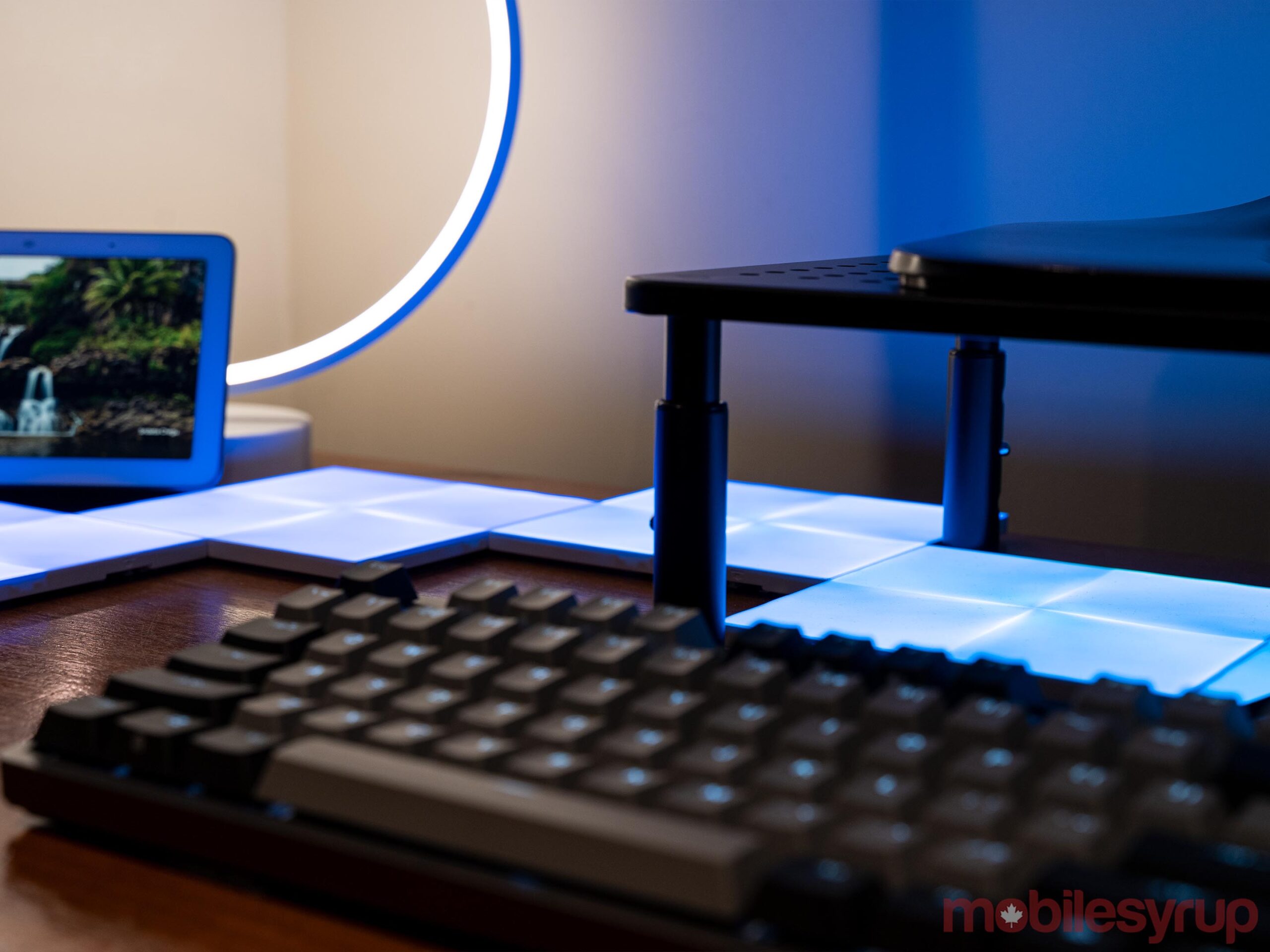 For me, probably the most intriguing and exciting feature of the Nanoleaf panels was the Screen Mirror feature. First announced back at CES 2020, the feature uses an app on your computer to mimic the on-screen colours with your Canvas or Light Panels.

In practice, set-up is rather simple. Head to Nanoleaf’s website and download the Screen Mirror app to your computer. From there, you can launch it, sign-in and connect it to your Nanoleaf smart lights.

Unfortunately, there are a few caveats with the system. For me, I was largely unable to use it with my desktop PC since I connect it to the internet via ethernet cable. Without a Wi-Fi connection, my desktop and the Nanoleaf panels were unable to communicate the information needed to make Screen Mirror work. However, I was able to test the app successfully on a laptop and it worked quite well. 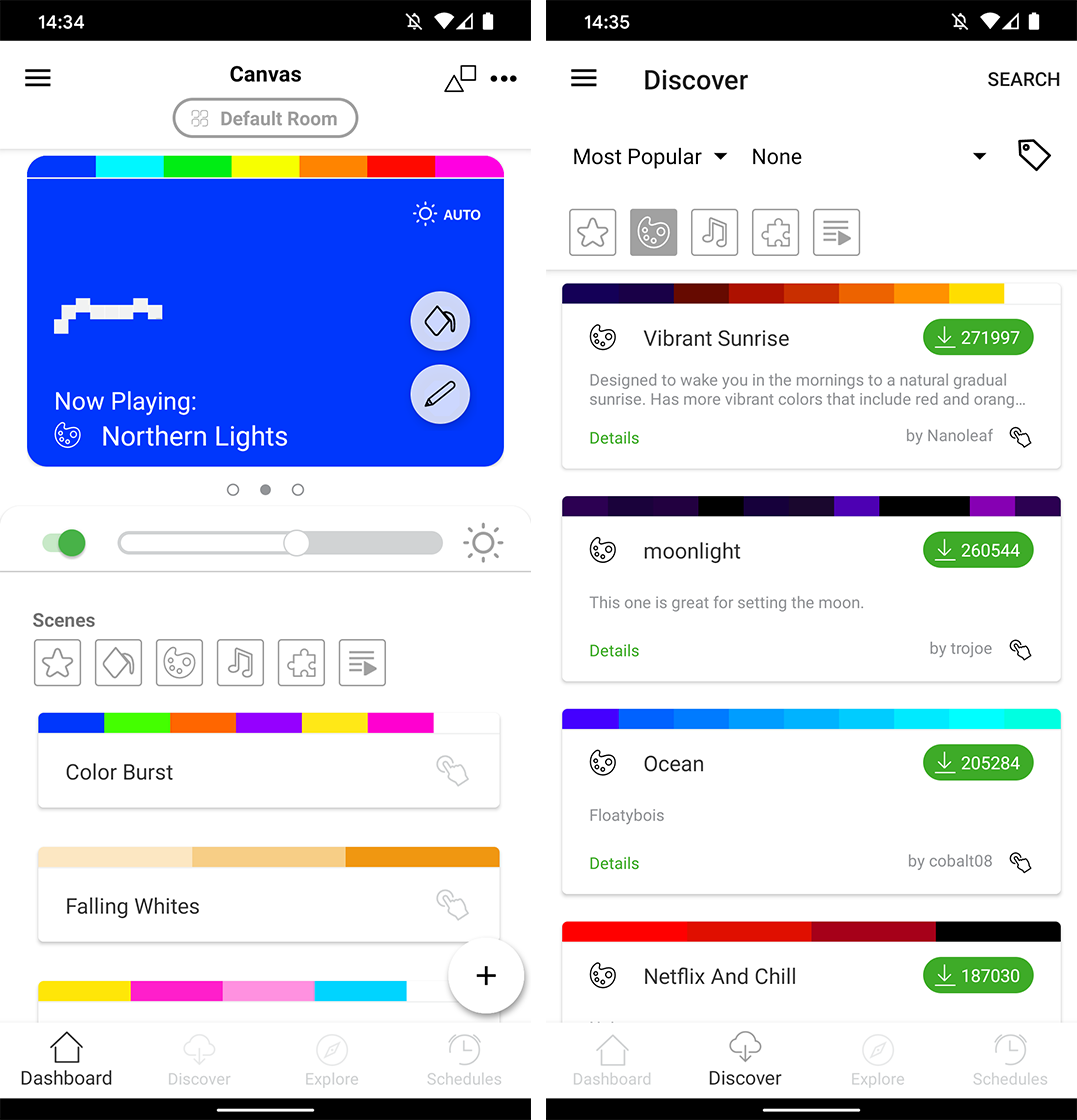 All in all, it’s a neat feature, but I think Nanoleaf has a ways to go before it’s a real selling point. Aside from the Wi-Fi and hardwired issue — which really isn’t Nanoleaf’s fault — Screen Mirror has rather limited compatibility. I’d love to be able to connect the Nanoleaf to my TV or to a game console to enjoy the same feature, but unfortunately, that’s not an option. Hopefully it’s something Nanoleaf adds in the future.

Aside from Screen Mirror, the panels support a variety of colourful lighting options. At a base level, you can select a huge number of solid colours, or any of the presets that cycle through a theme of colours. If that’s not enough, you can create custom Scenes and download new options from the ‘Discover’ tab in the app.

Pricey but worth it 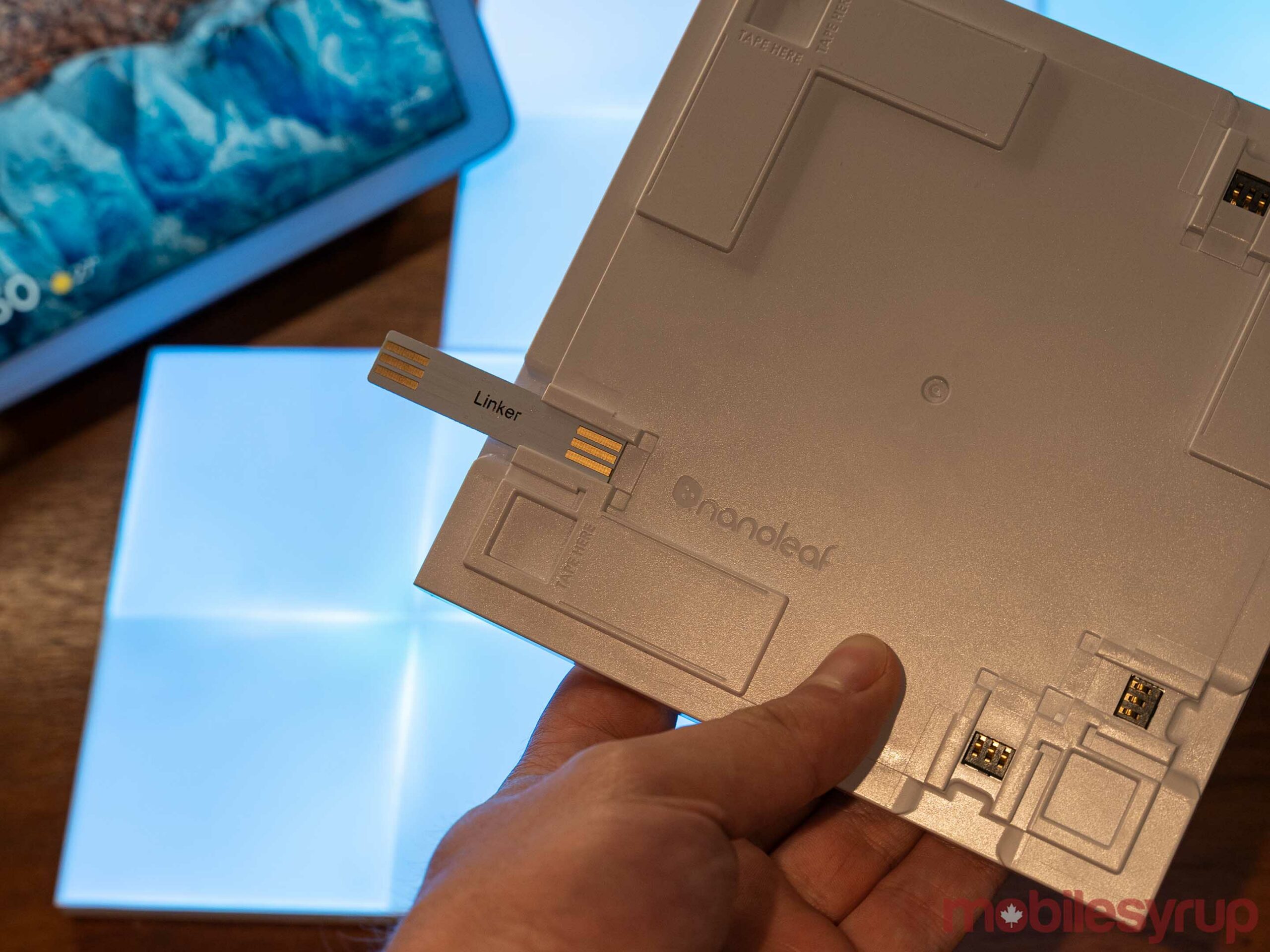 While smart lightbulbs will likely continue to be the go-to option for most people, Nanoleaf’s various light panels also make for great and unique accessories. The versatility of the panels makes them endlessly customizable.

For example, both the Canvas and Light Panels come with a variety of ‘links’ that allow you to connect panels in unique patterns. It’s a really smart system that allows users to adapt the panels to whatever needs they have. Plus, Nanoleaf sells flexible versions of the links on its website if you want to wrap your panels around a corner.

Along with the unique linking system, both sets come with special mounting tape for drill-free wall mounting. For me, I chose not to mount the Canvas as I liked having the panels on my desk as a backdrop for photos I take for work. That’s the beauty of Nanoleaf’s panels; you can set them up in almost any way. 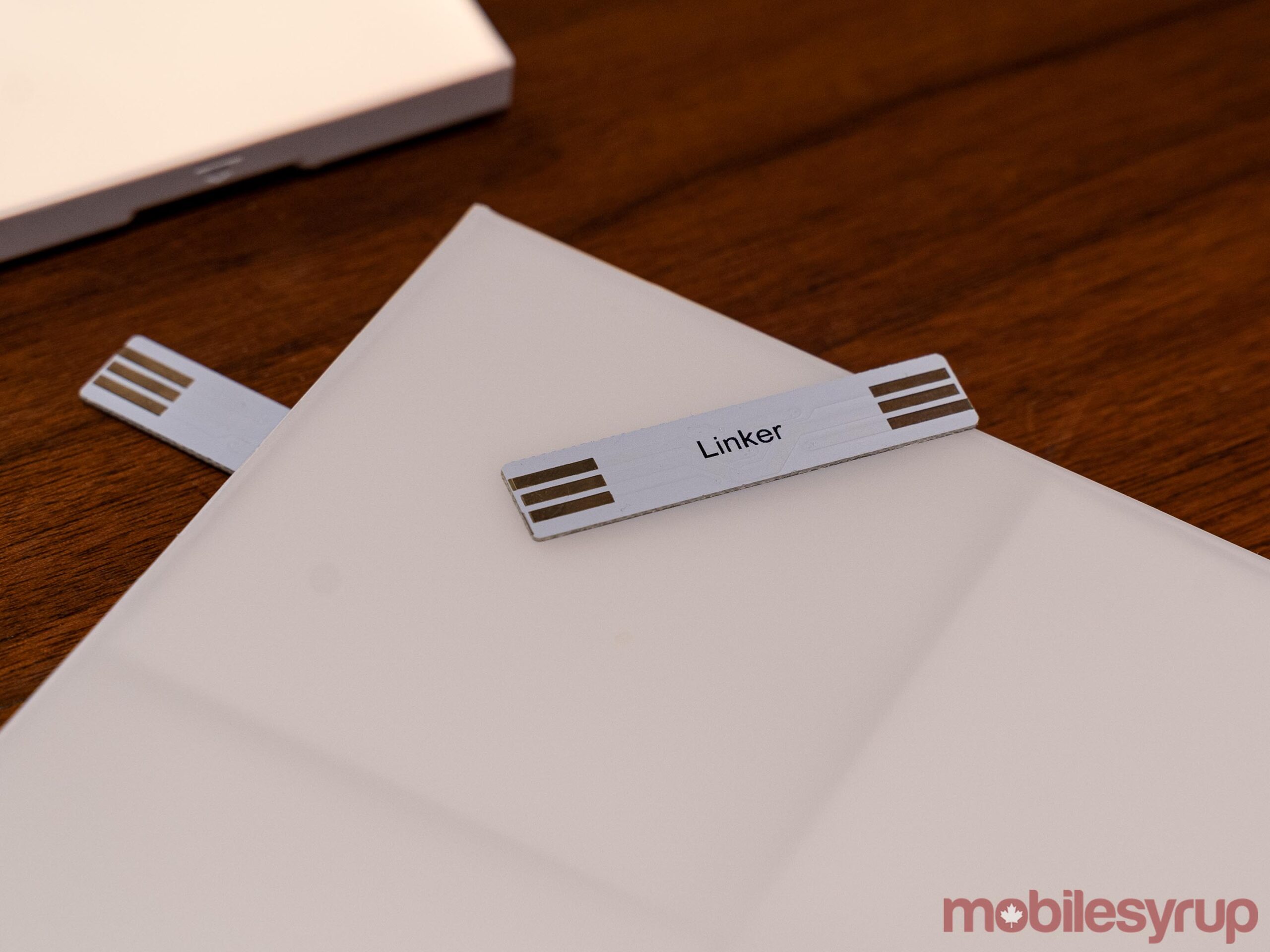 Unfortunately, Nanoleaf panels aren’t cheap. The Light Panels start at $249.99, or about $28 per panel, while the Canvas starts at $299.99, or $33 per square. It’s hard to make a direct comparison to smart lightbulbs like those from LIFX or Philips Hue, since those bulbs can cost around $60 each for the multi-colour options, but can also be used almost anywhere. Nanoleaf light panels, while you technically pay less per panel, require all the panels to be connected in order to work. In other words, you essentially get a single light out of Nanoleaf for over $200.

That said, Light Panels and Canvas allow for much more unique setups than a typical lightbulb. If you’re looking for a way to spice up your living room, office or another area of your house, it’s worth considering Nanoleaf. This is especially true if you want a unique lighting installation. Alternatively, it can be a great way to liven up your gaming system with fancy lighting.

You can learn more about Nanoleaf and its various light panels on the company’s website.