Toronto-based Nanoleaf’s modular Aurora lights will trip you out 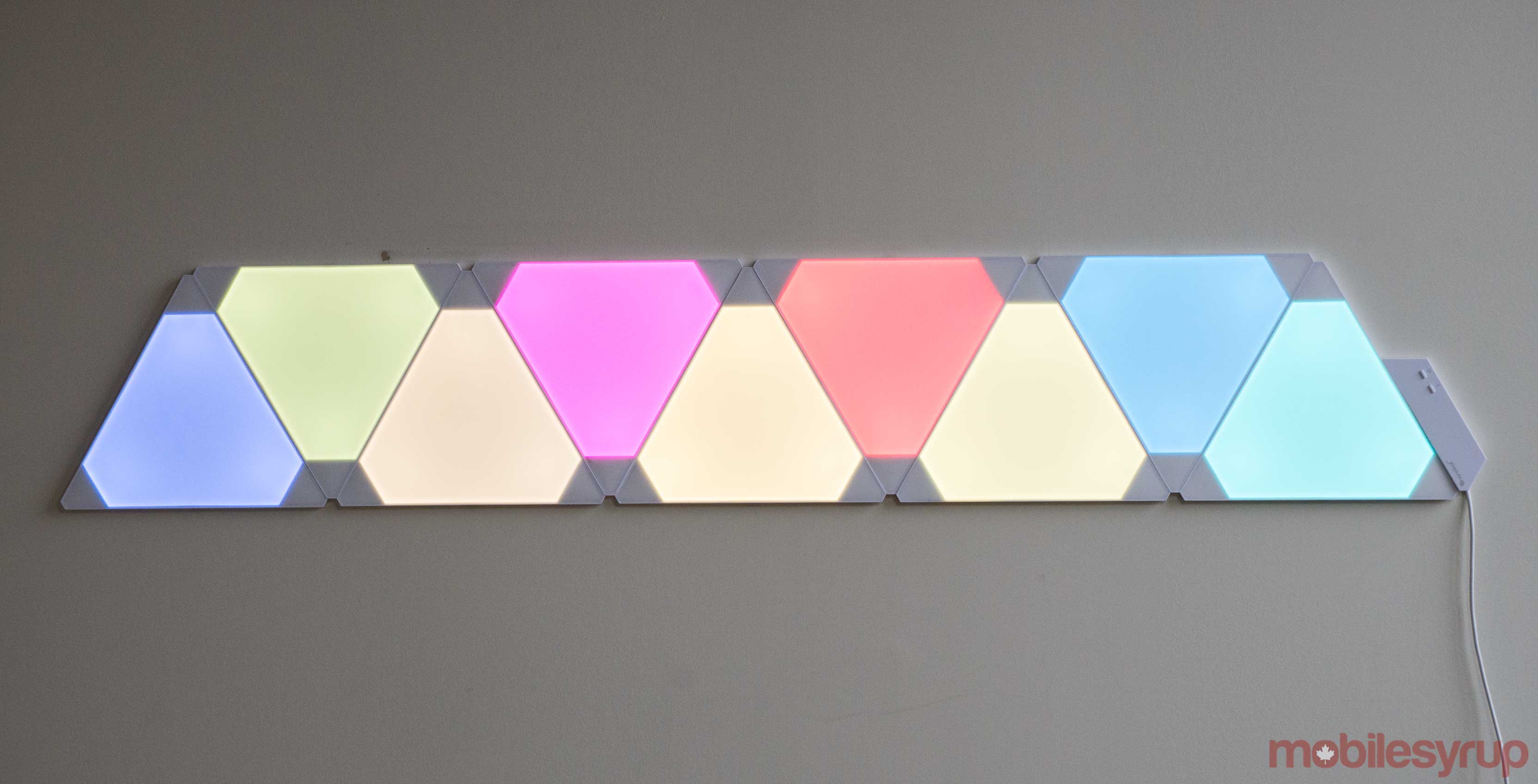 For example, every smart light bulb in my home is a colourful Philips Hue light bulb, controlled by an Amazon Echo I managed to get my hands on courtesy of a friend that lives in the U.S. (here’s hoping the Echo finally comes to Canada soon).

So when Toronto-based Nanoleaf, one of the industry’s premiere smart bulb manufacturers, reached out to MobileSyrup asking if we were interested in checking out its recently release Aurora modular lighting system, I jumped at the opportunity. Unlike traditional smart home light bulb products, Aurora places an emphasis on fun and customization, allowing users to create different lighting setups and designs.

Overall, Aurora offers a unique experience that’s a little on the pricey side, though it does suffer from other drawbacks as well.

Light up your life with colour 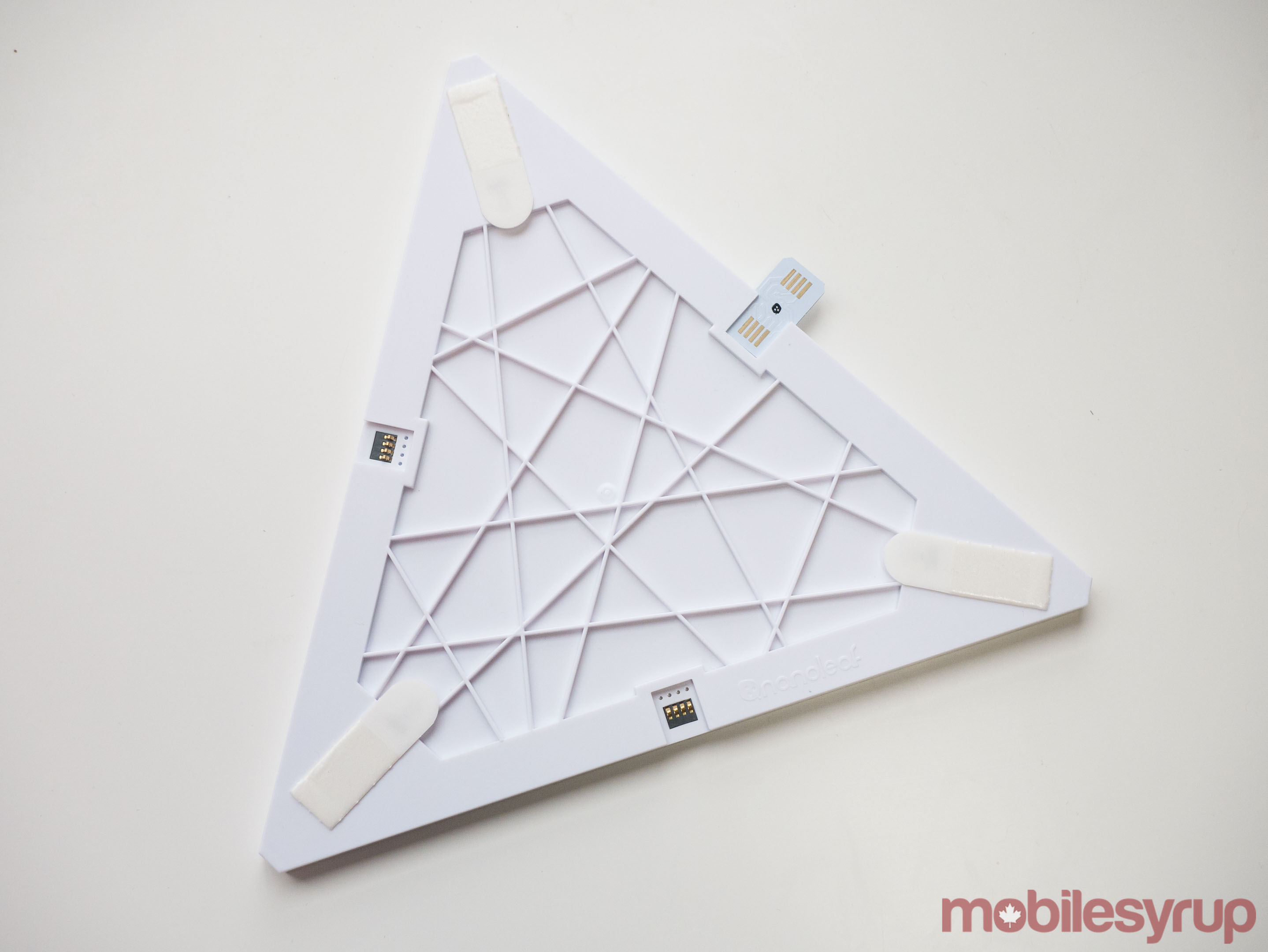 With Nano Leaf’s Aurora, you’re able to connect each lighting panel via small linker modules, allowing you to create various shapes with the lights. For example, you can make a triangle, or opt to create a more traditional straight light design, or even something that’s zigzagged and a little more crazy looking.

The lights are simple to disconnect and pop out from one another with ease, though it’s important to note that if the 3M mounting strips used to attach the lights to the wall (they come included with Aurora) aren’t sticking adequately, the lights will fall to the ground. However, if you intend to set the lights in a specific design and leave them in that layout, this won’t be an issue, though that ruins half the fun. If you want to move them around, however, Nanoleaf’s decision to opt for stick 3M wall mounts quickly becomes a problem because after a trying out a few layouts, it’s hard to get the lights to continue sticking to the wall. 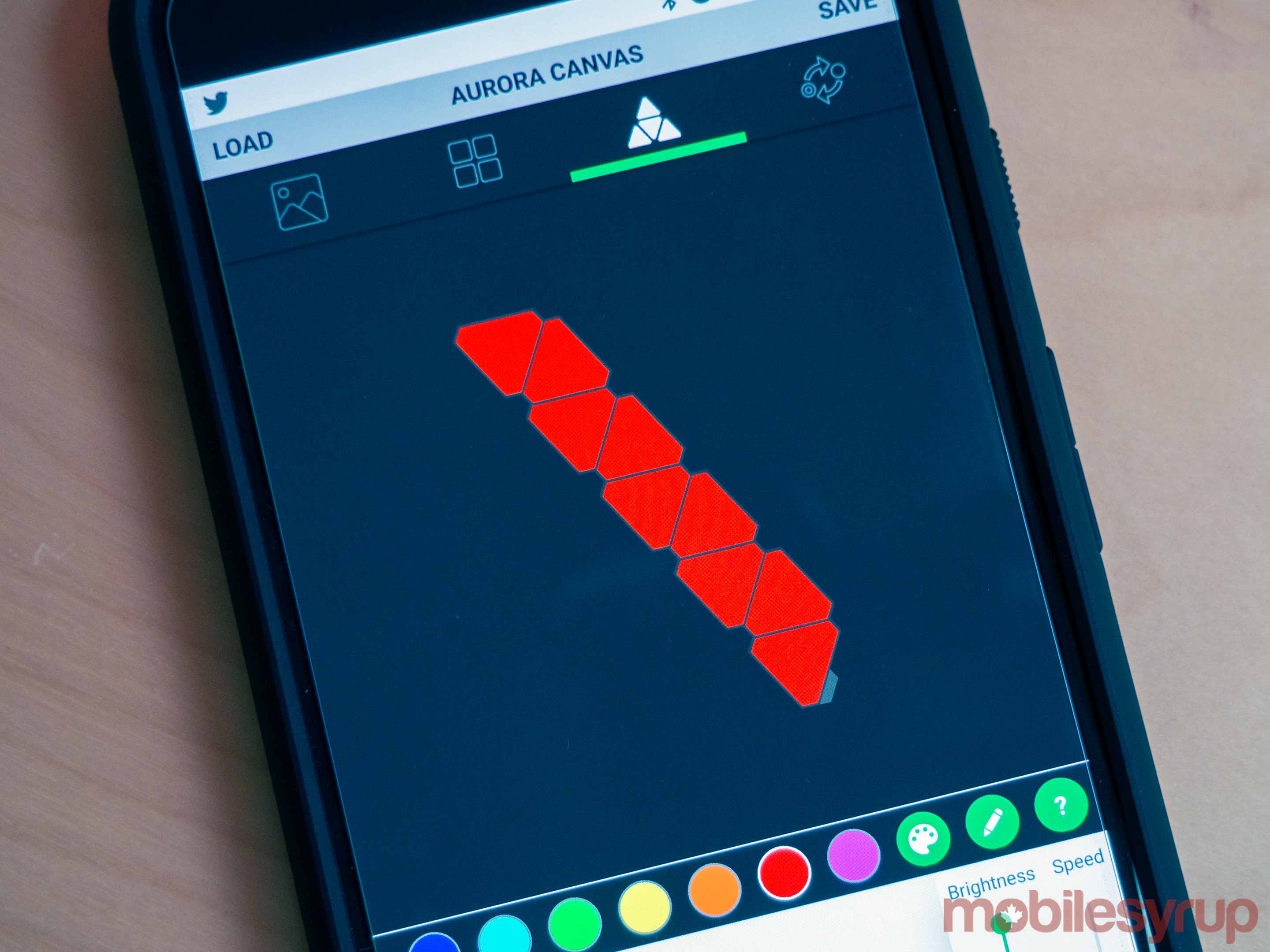 In total Aurora comes with nine panels, though more can be purchased in sets of three at an additional $69 cost. On the Android and iOS app side of Aurora, you’re able to select individual colour hues for each design, as well as create highly customizable moving patterns.

Whatever setup you’ve selected for the lights is also automatically recognized by the app, making customization a simple process that only requires a few swipes of your finger. Painting Aurora’s various lights multiple colours, and watching those hues appear on the screen, is fascinating, especially the first few times you create your own pattern. 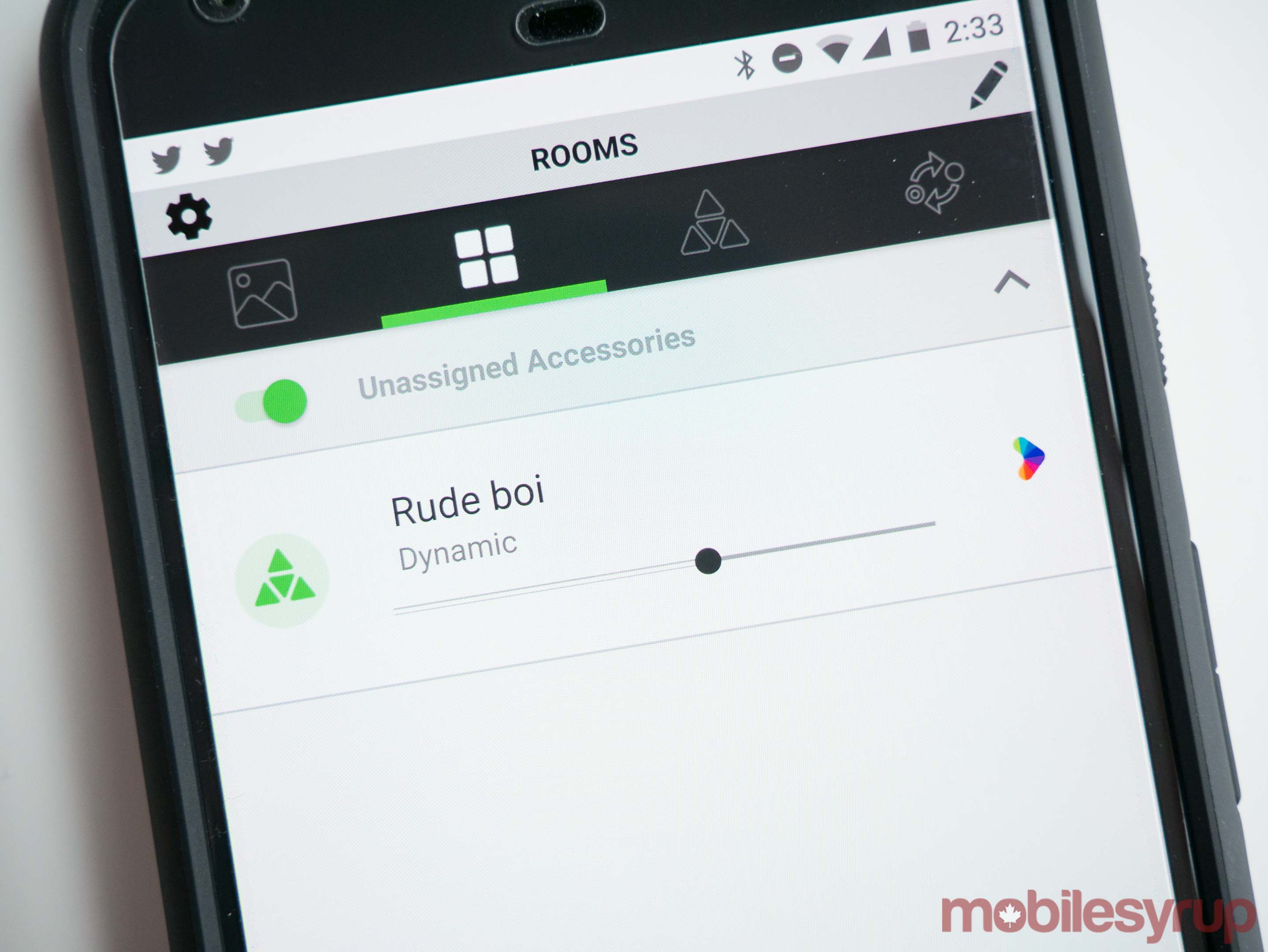 From within the app, users can change colour flows, brightness speed and a variety of other settings. All in, I was actually surprised at how customizable Aurora’s lighting setup is.

If there’s an aspect of the lights you’d like to alter or shift, whether that’s consistent light, or a pattern, there’s likely a way to change it to match the specific design you’ve envisioned.

HomeKit but no Amazon Echo 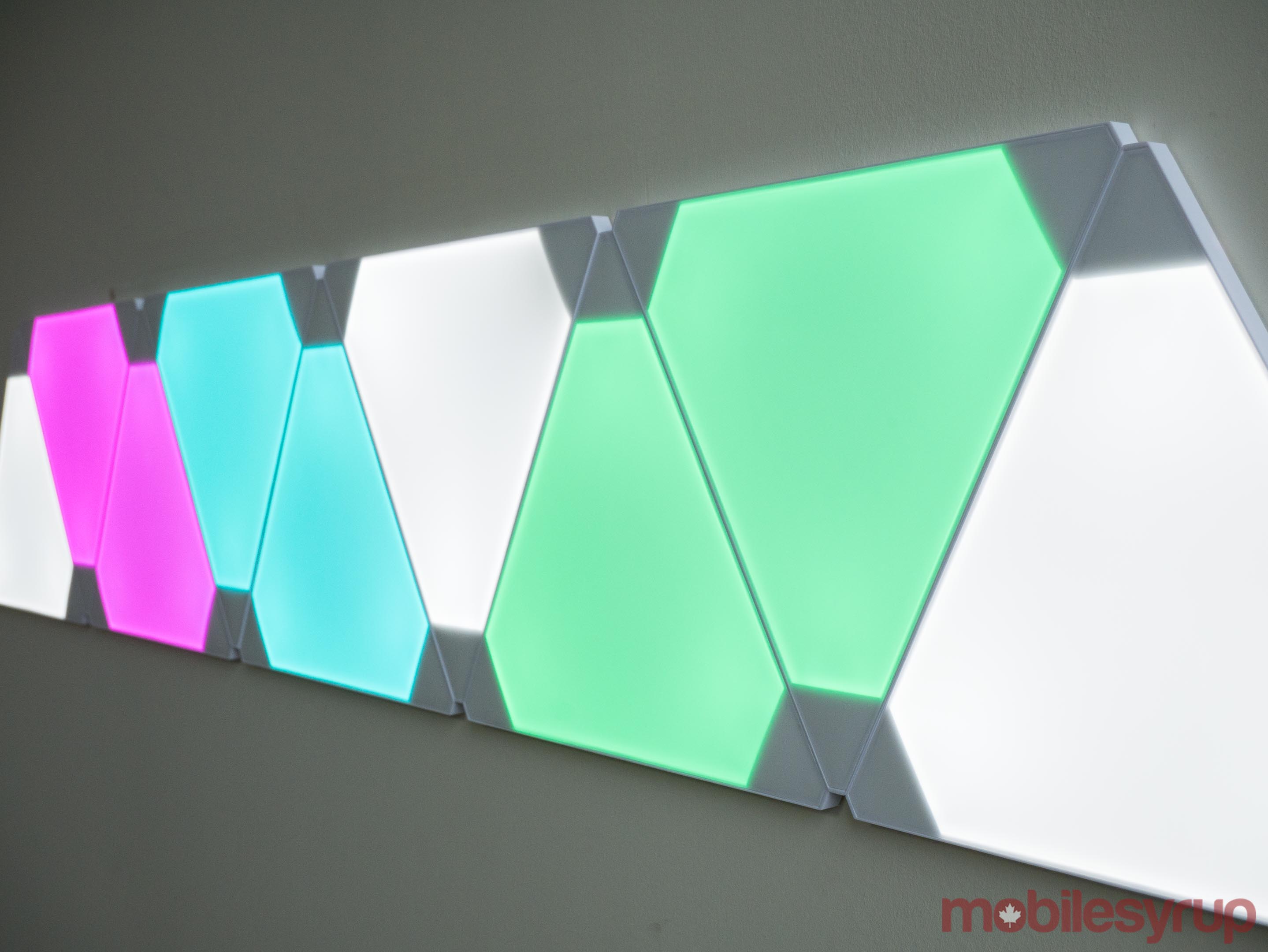 Setting up Auora with HomeKit is a simple process if your smart home products are controlled within Apple’s ecosystem, which some would argue is the top universal language on the market. Just snap a photo of the HomeKit code located on the back of Aurora’s box and the lights will automatically be added to your HomeKit set up. If you aren’t a user of Apple’s smart home system, however — for example I use Amazon Echo’s to control my smart home –you’ll unfortunately be left out of the universal ecosystem fun.

At one point Nanoleaf had a countdown on their website related to Echo integration, though that timer seems to be gone and Alexa functionality still hasn’t been added to any of the company’s products. 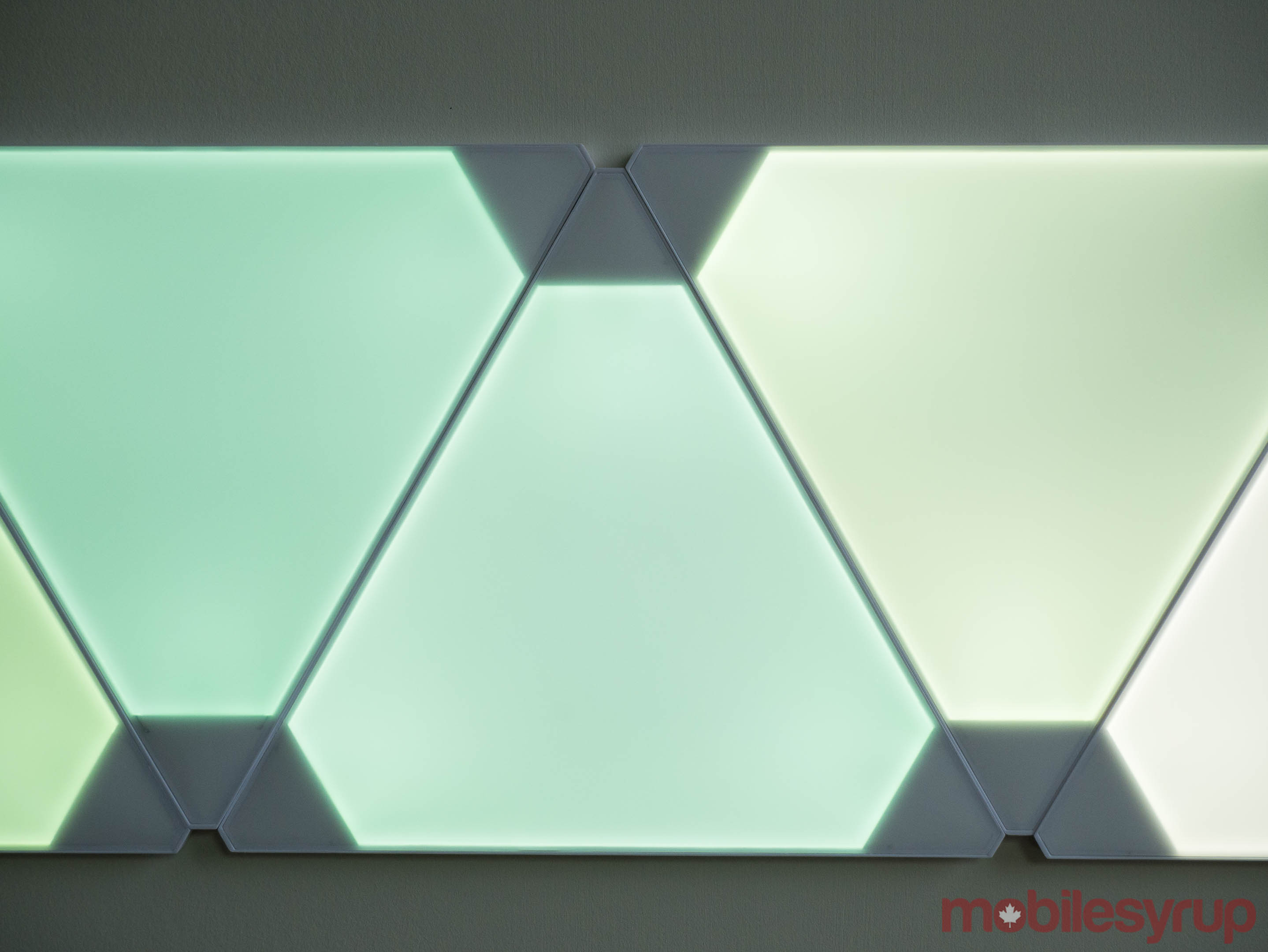 The absent Aurora-Echo compatibility made using the modular lights more difficult for me since I’m used to speaking to Alexa in order to turn on my lights. While taking out my phone and launching Nanoleaf’s Android or iOS App store isn’t difficult, I found myself not playing with the lights as much as I might have if they were integrated directly with the Echo that controls my home.

Of course if you’re a HomeKit user, you can create voice commands for the Nanoleaf via Apple’s smart home app. Still, considering other home products — Philips Hue and Ecobee’s smarthome thermostat line for example — work with the Amazon Echo, this is a disappointing move on Nanoleaf’s part.

What is Aurora good for? 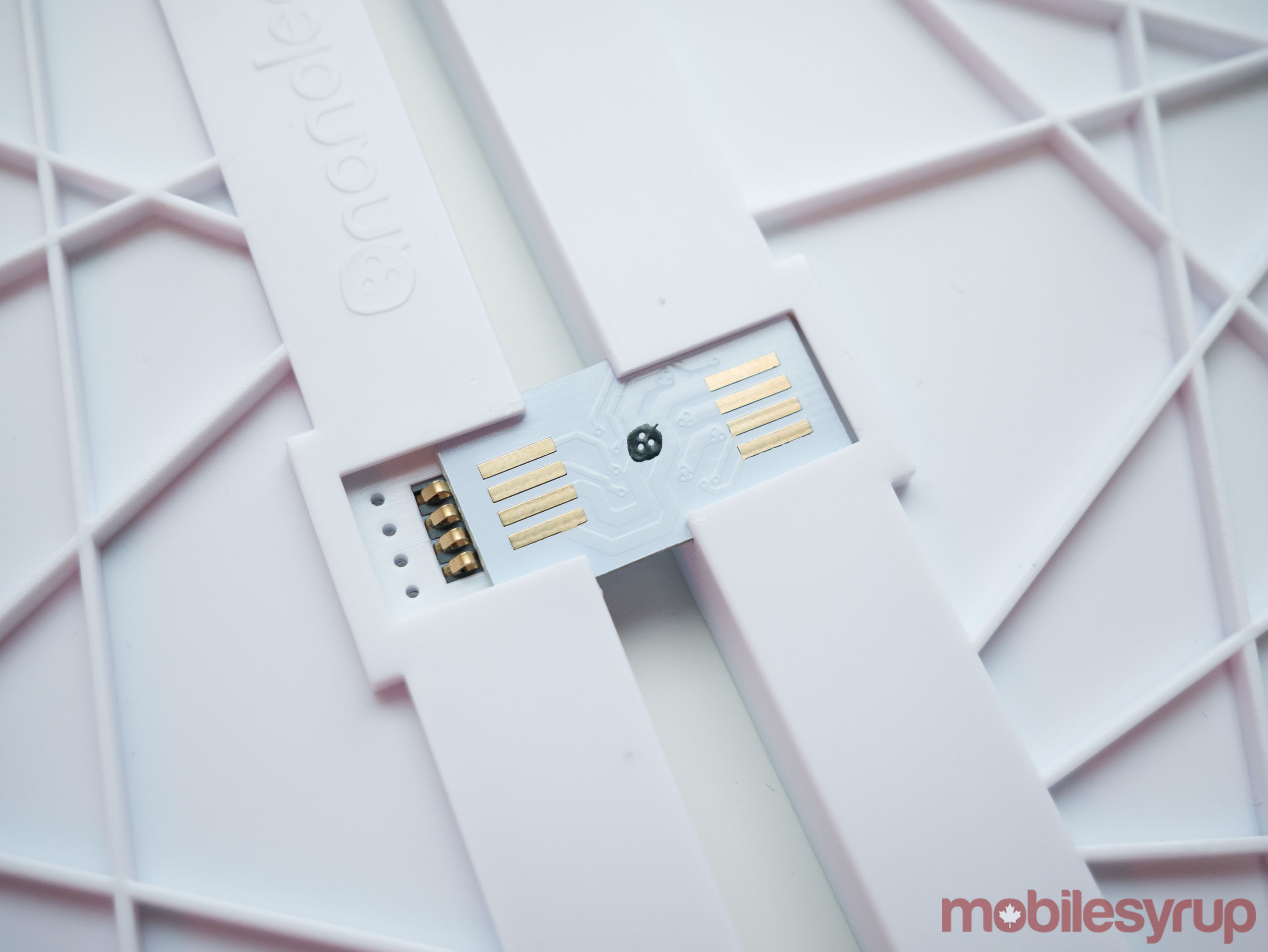 Once the initial novelty wear’s off (I actually spent two hours playing around with Aurora at one point), beyond impressing friends or turning on a crazy pattern when you’re having a party, it’s difficult to find a practical purpose for Nanoleaf’s Aurora. Similar to Philips’ coloured Hue light bulbs, I typically found myself opting for a standard white light when using Aurora, rather than bright colours and complicated patterns. My apartment is dimly lit and doesn’t have pot lighting, so additional lights helped illuminate my living room considerably.

Another downside is the fact that it’s difficult to hide Aurora’s cord. For example, we’re considering using Aurora as a backdrop for some of the video work we do here at MobileSyrup, but the lights’ unsightly cord will always be present. Given the lights’ unique use case, having the option for Aurora to run off batteries would be a welcome feature. 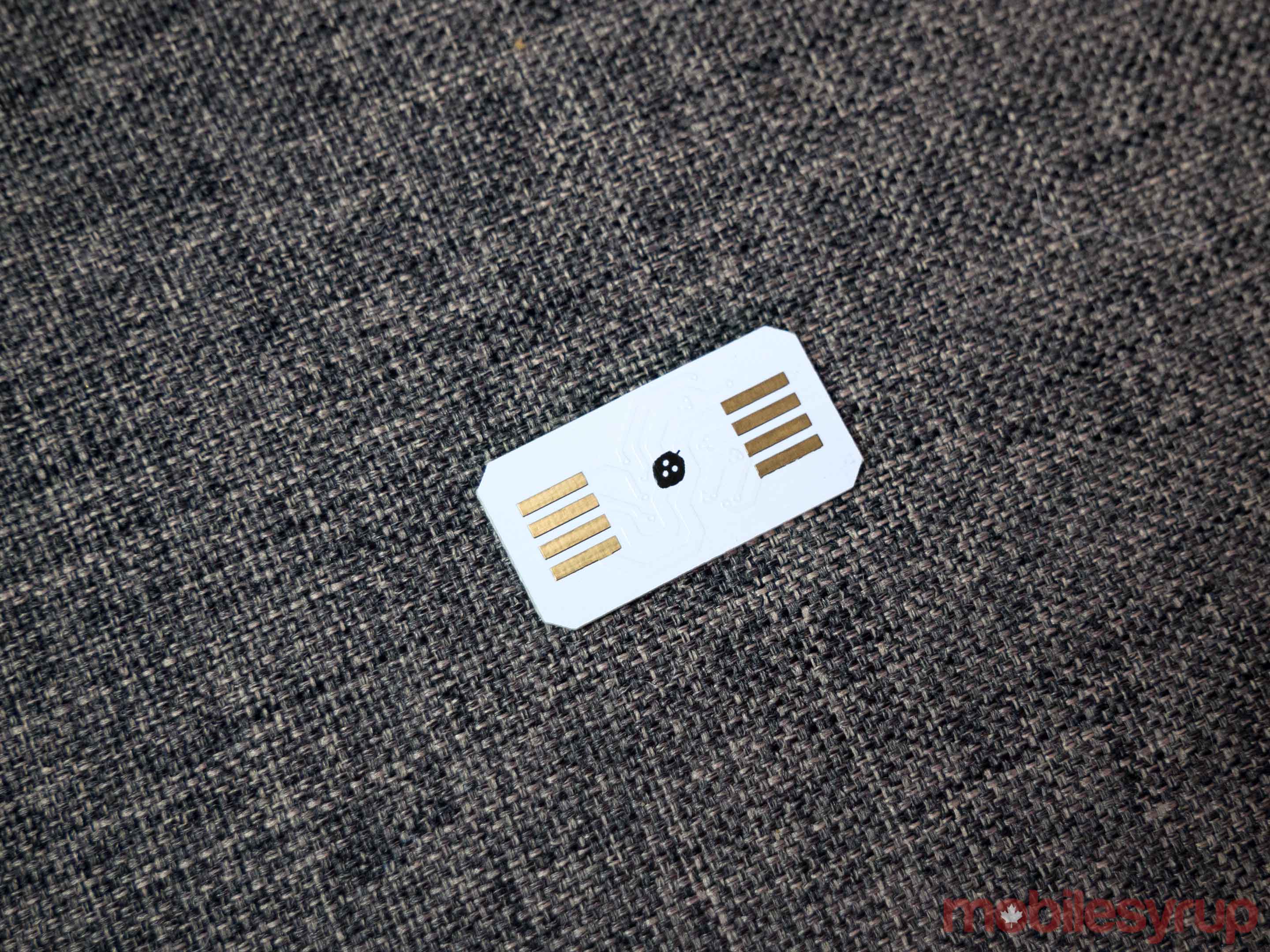 That said, Aurora is a fascinating screen saver for your wall, though its $219 price tag is expensive, even in the pricey smart home space.