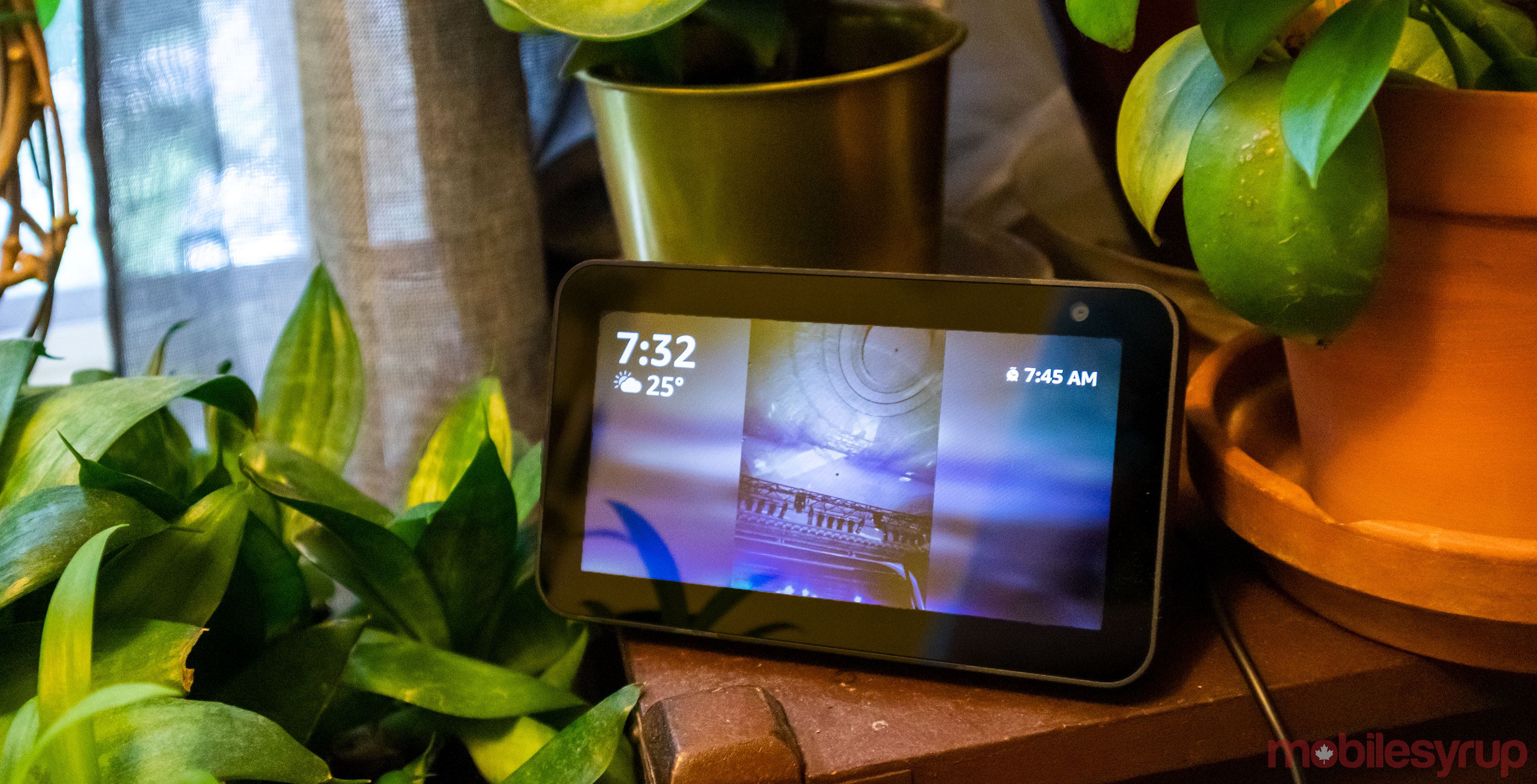 The Echo Show 5, Amazon’s latest entry in the smart display market is pretty remarkable. While I may have gone into this review with a bit of hesitation compared to Google’s Nest Hub, the Echo Show 5 repeatedly exceeded my expectations and in the end, became one of my favourite smart displays on the market.

The tiny device takes some of the core ideas of the Echo Dot, such as its low cost and small size, and implements them successfully with the addition of a display.

While the Show 5 doesn’t include every feature Google packs into the Nest Hub, it’s considerably cheaper and in my experience, offers enough to make it a worthwhile addition to any smart home setup.

The small $100 device is perfect for a bedroom or other high traffic areas since it can help with accomplishing small tasks like showing the weather or your next calendar event. It also excels at controlling smart home devices.

Where the device falls short, is in categories I find less useful, such as watching video content and the overall speed of the operating system, but I’ll dive more into those features below.

A practical look that fits anywhere 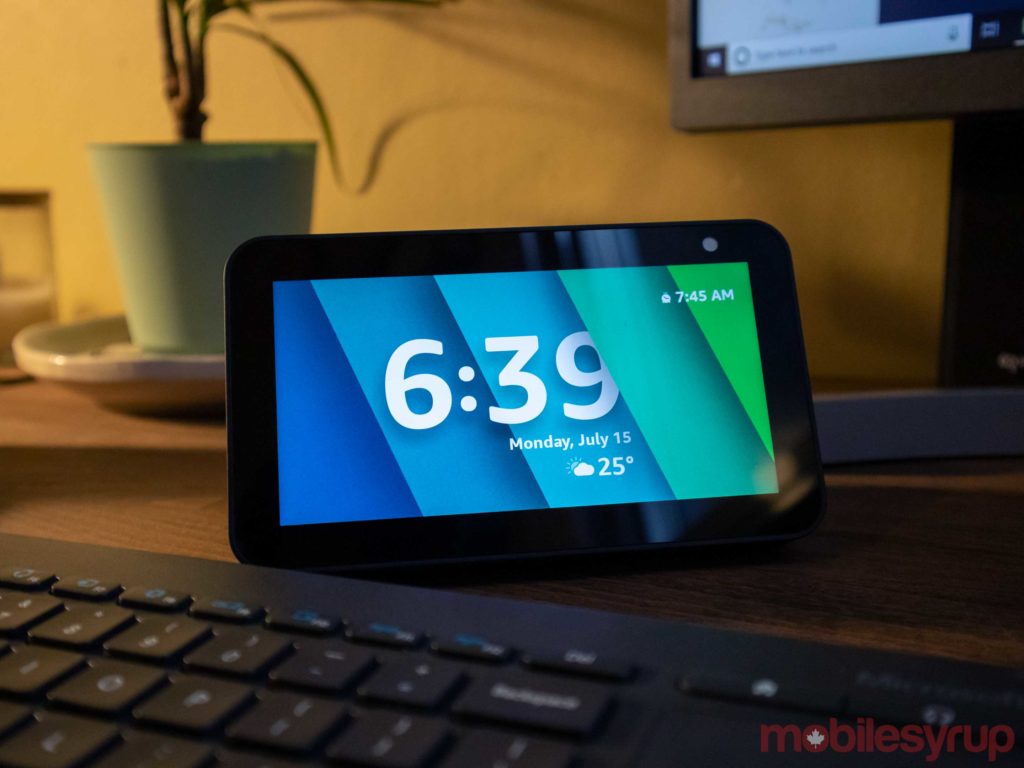 There’s something about the tiny Echo Show 5 that draws me to its design. Its simplicity resembles the streamlined look of Ikea furniture in some ways and I think that’s a huge plus for a device that’s meant to go anywhere.

Depending on the room you want to place it in you’ll likely want to match it to the room’s decor. The Echo Show 5 is available in ‘Black’ and ‘White’ so it should be able to fit into most situations.

The front of the device features a 5.5-inch touchscreen with a resolution of 960 x 480 pixels. While this doesn’t seem incredibly crisp on paper, to my eye the display looked perfectly fine.

Somewhat large bezels surrounding the screen, and the device’s webcam sits in the top right corner of the device.

The Echo Show 5 also features two microphones, two volume buttons and a switch to digitally disconnect the microphone and the camera. There’s also a slider that pushes a cover in front of the camera for users concerned about privacy. 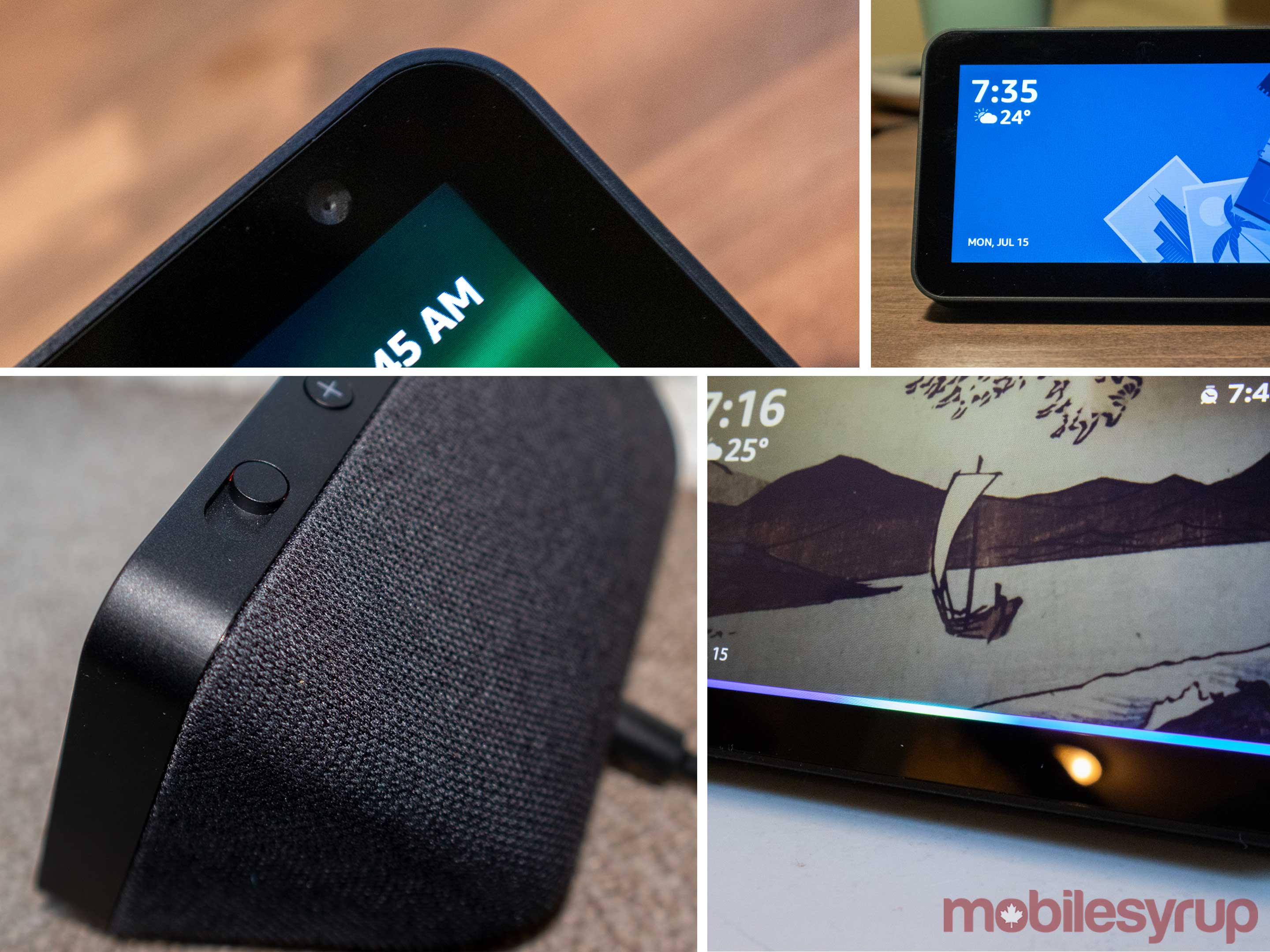 The sloped back is constructed of fabric that is reminiscent of the sides of the latest Echo Dot, but the colours match the face of the Echo Show 5’s display.

Overall, the Show 5 is a cute little device that fits just about anywhere due to its size. Personally, I like the look of it more than Google’s Nest Hub.

It’s what’s inside that counts 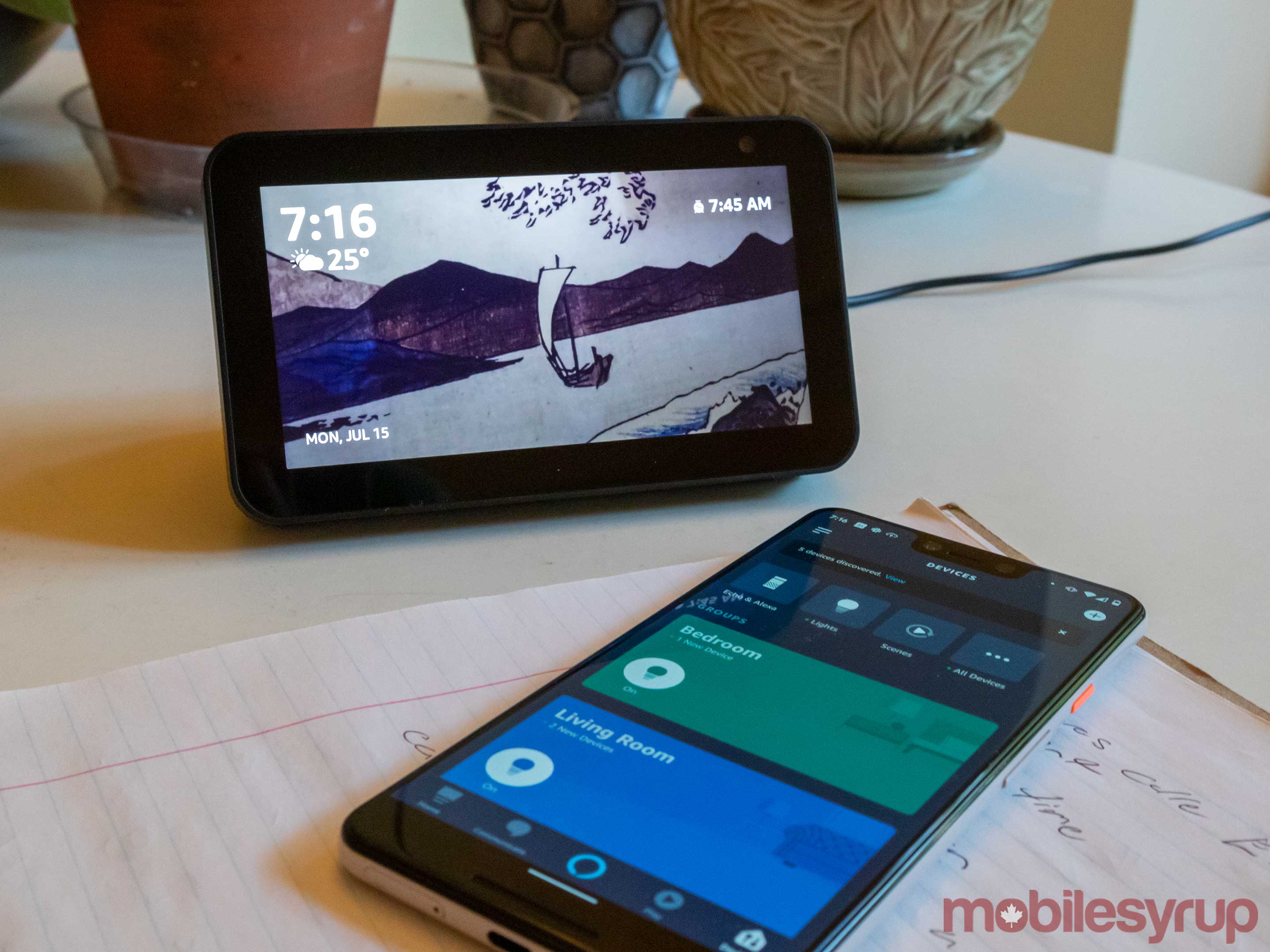 The Show 5 runs the same software Amazon packed into the 2nd-generation Echo Show, but this time around there are a few tweaks and upgrades that make it a better smart home controller and alarm clock.

I’m also a fan of how the Alexa interface looks. The navy blue colour background is less intrusive than the heavy use of white space featured in the Nest Hub, which makes it more pleasing to look at in the dark.

If you’re used to Google’s smart display operating system, Alexa’s take on a visual digital assistant is easy to understand but does take a little time to get used to.

First off, the Echo Show 5 features an intuitive smart home control panel. Swiping in from the right side of the screen reveals a plethora of options that you might be used to seeing in the Alexa app. This includes controls like ‘Smart Home,’ ‘Communicate,’ Music, ‘Videos,’ ‘Routines’ and ‘Alarms.’

Swiping down gives you quick access to the screen’s brightness slider, the ‘Home’ button, ‘Settings’ and a ‘Do Not Disturb’ toggle.

Beyond the controls, the display defaults to one of Amazon’s many slick looking and customizable preset clock faces, or a rotating carousel of photos that you can upload from an Amazon Photos account. It’s a bit annoying to use and you need an Amazon Photos account which comes with Prime, or costs $12 per year. While this is a bit of a workaround compared to using Google’s free Photos app, it does accomplish the same thing. 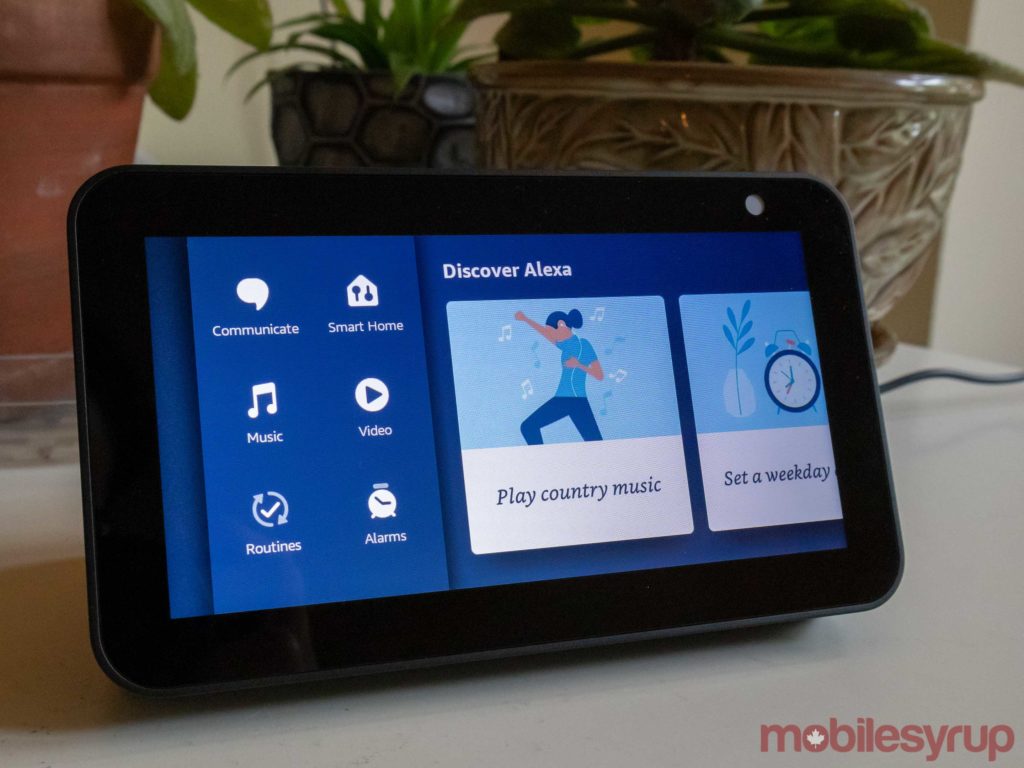 On the other hand, it does offer better clock faces than the Nest Hub, so if you don’t want photos then this is the device for you.

The device will also periodically show you things like upcoming calendar appointments, and suggest phrases to ask Alexa, like “try asking, how tall is the CN Tower.” You can disable this in the settings if you want.

Having a screen also means that lots of the answers you would typically get from an Alexa device are presented to you with extra controls or context. This means if you ask for the weather, you get to get an icon showing if it’s sunny out as well as the highs and lows for the day. When the weather screen appears you can swipe on the screen for an extended forecast too. Or, if you ask Alexa to turn a specific light on, there’s an on-screen slider that lets you adjust the brightness.

The screen even adds the ability for users to see footage from select smart home cameras such as Ring doorbells and Wyze security camera.

Since the Echo Show 5 features a screen and a camera, you can make video calls as well as regular voice calls. Further, you can call other Echo Show devices by simply asking Alexa to contact a friend that you know either has the Alexa app or an Echo Show. You can also use Skype to call other people on other devices, but you need to set it up in the Alexa app first.

At night, the Echo Show 5’s screen goes all black and displays a little clock in red font. This makes the device far less noticeable in a dark room. 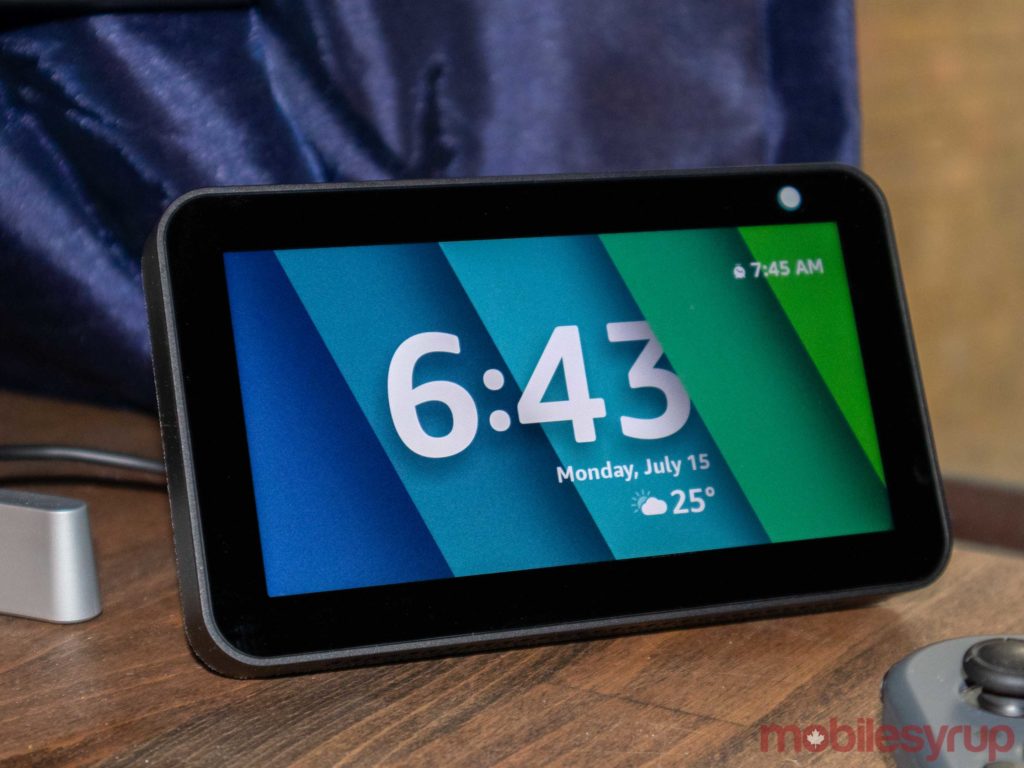 Secondly, the Show 5 is a great alarm clock. You can schedule alarms to go off every day, or you can talk to Alexa to get the device to program an alarm for the morning. Before the alarm goes off the screen gradually brightens and shows the day’s weather. Moreover, at peak brightness, which is when your alarm is scheduled, the alarm begins to sound. One of the cooler features lets you tap on the top of the device to snooze an alarm.

An update that came to Alexa alongside the Show 5 even lets you set ‘Routines’ to launch when you cancel your alarm. Routines are a preset sequence of commands that Alexa jumps into. For example, once your alarm stops, Alexa can tell you the weather, a Canadian fact of the day, read the day’s calendar and then play music from a Spotify playlist.

All of this stuff is amazing, and while it might not always be perfect, it more often than not gets the job done.

That said, there are a few issues that hold the Echo Show 5 back.

Sometimes when tapping icons on the screen it takes a moment to open up whatever section you’re trying to access. While annoying, this wasn’t a deal-breaker.

The slowness of the device is frustrating in other ways as well. For example, browsing the web is a pain. Despite that, I do give Amazon credit for including a browser in the Echo Show 5. If you ask Alexa to open either Silk (Amazon’s browser) or FireFox, then the Show 5 launches the browser. Notably, you can access YouTube through the browser as well.

Stacking up to the competition 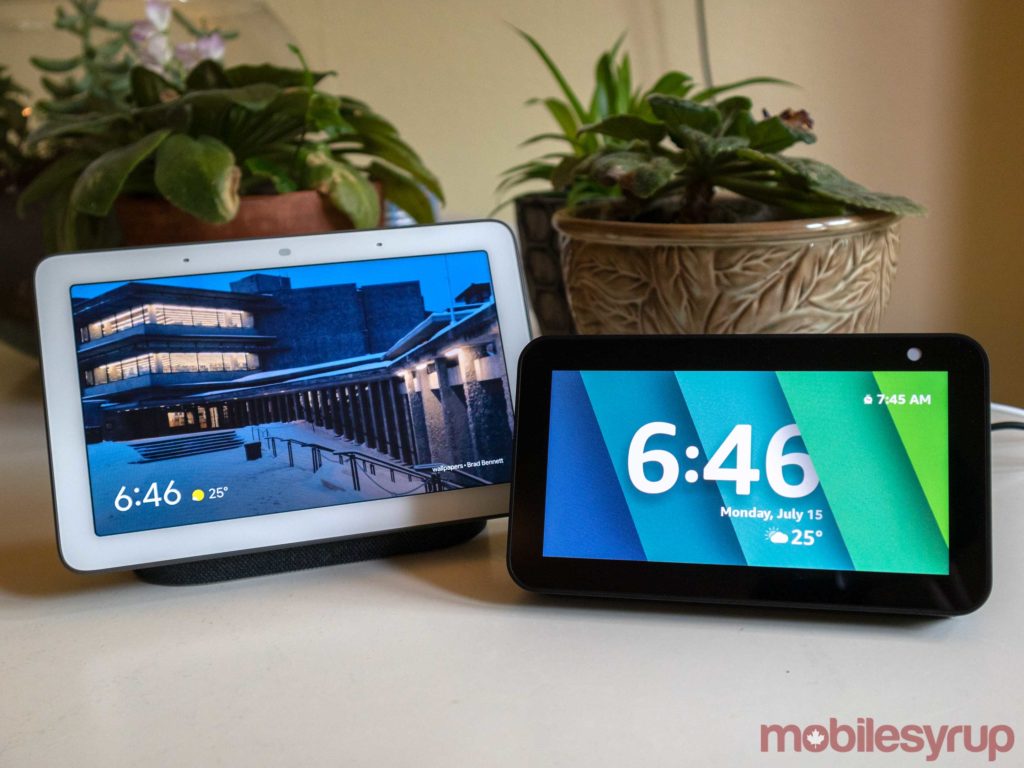 I won’t dive too deeply into comparing the software experiences of the Echo Show 5’s competition, mainly the Google Nest Hub and the Lenovo Smart Clock.

All three devices can control your smart home just like a regular Alexa-enabled device or Google Assistant. Right away, I think the Lenovo clock isn’t quite worth comparing since its touch controls are primitive compared to the other two devices. It’s not a terrible device, but in this context, I’d say it’s like an Echo Dot compared to a regular Echo, albeit with a much higher price tag.

Now, while the Nest Hub may have a larger and nicer screen and true YouTube support as its ace in the hole, the Show 5 pulls ahead in some key areas. Google Assistant is also a more useful digital assistant right out of the box, Alexa isn’t that far behind, especially if you take the time to add skills and customize it.

For one, it includes a much more accurate speaker. Neither is perfect, but if I want to listen to music quietly in my room, I’m using the Show 5 every time.

Beyond that, I like how the Echo Show 5 is smaller and still provides the same overall smart display experience when compared to the Nest Hub. The size is great because it makes the device easier to place in a room.

There are other aspects where the Google display pulls ahead, like having Google Keep and Commute information from Maps by default. These features are a plus, but not precisely killer since you can download Alexa Skills that help accomplish the same tasks with the Echo Show 5.

I also like Google’s card layout on its smart displays compared to how Alexa pushes information to the main screen. Both operating systems work similarly, but I find the cards jump out at me more and look cleaner.

Finally, price is also an important consideration. Since the Echo Show 5’s $100 cost comes in at about $70 cheaper than the Nest Hub, it’s hard not to pick up the Show 5 instead of the Nest Hub. 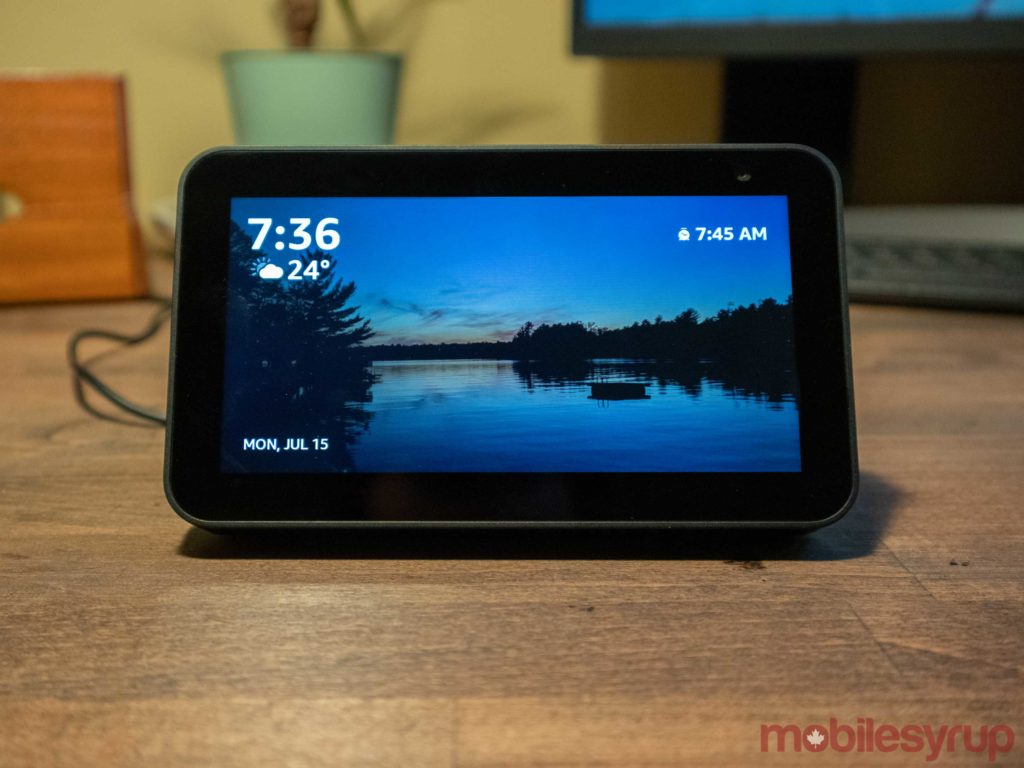 Is this the smart display for you?

During my time with the Echo Show 5 the device has grown on me immensely. For the longest time I’ve had Alexa as my digital assistant in the living room and Google in the bedroom.

With the Show 5, I welcomed Alexa into my room and I even made it the default assistant on my phone for a week to see what it was like to switch, and so far the experience has been fine.

The Alexa-powered smart display is the perfect bedside table smart device and the added features the display brings to Alexa are fantastic.

Like I said in my opening, I don’t know if this device is for everyone, and if you’re deeply committed to Google’s ecosystem, it might not be worth it for you over the Nest Hub, but if you’re just starting to build your smart home and deciding what route to go, this is a fantastic option and one that I wouldn’t hesitate to recommend.

I had a hard time finding things to do with my smart speakers before, but now that it has a screen and it’s in my bedroom I’m getting a lot more use out of it.

Overall, it’s not the fastest device under the sun, but since it’s a smart display, it doesn’t have to be. And while the Alexa app and interface took some time to get used to, I found that I was able to figure it out after a few days and I’ve got a real handle on it now.

Amazon came out of the gate strong with its first Echo in 2014 and while every device since then hasn’t been a hit, the Show 5 certainly deserves to be and I can see it getting better with updates over time.