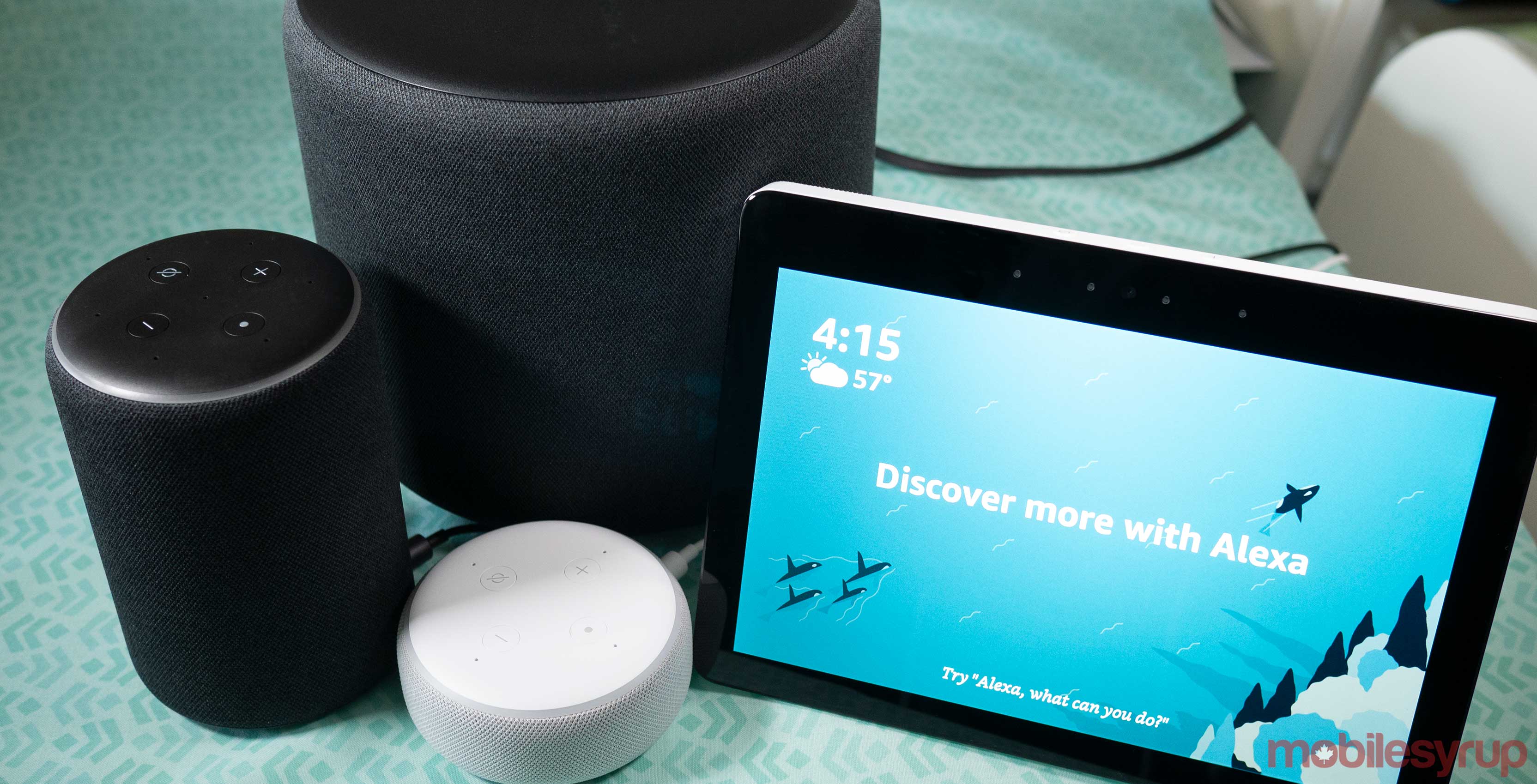 While Amazon announced a flurry of new products a few weeks ago during a keynote at the company’s Seattle, Washington head office, in typical fashion, only select devices are making their way to the Canadian market.

First and most importantly, the e-commerce giant is finally bringing the Echo Show to Canada. The 2nd-generation Echo show is a significant step above its predecessor thanks to its sizeable 10-inch display and surprisingly impressive sound quality.

Amazon also launched the third-generation version of its tiny Echo Dot, along with a fabric-covered 2nd-generation iteration of the Echo Plus, the company’s highest-end smart speaker.

Below is a quick look at each of Amazon’s new Echo devices. 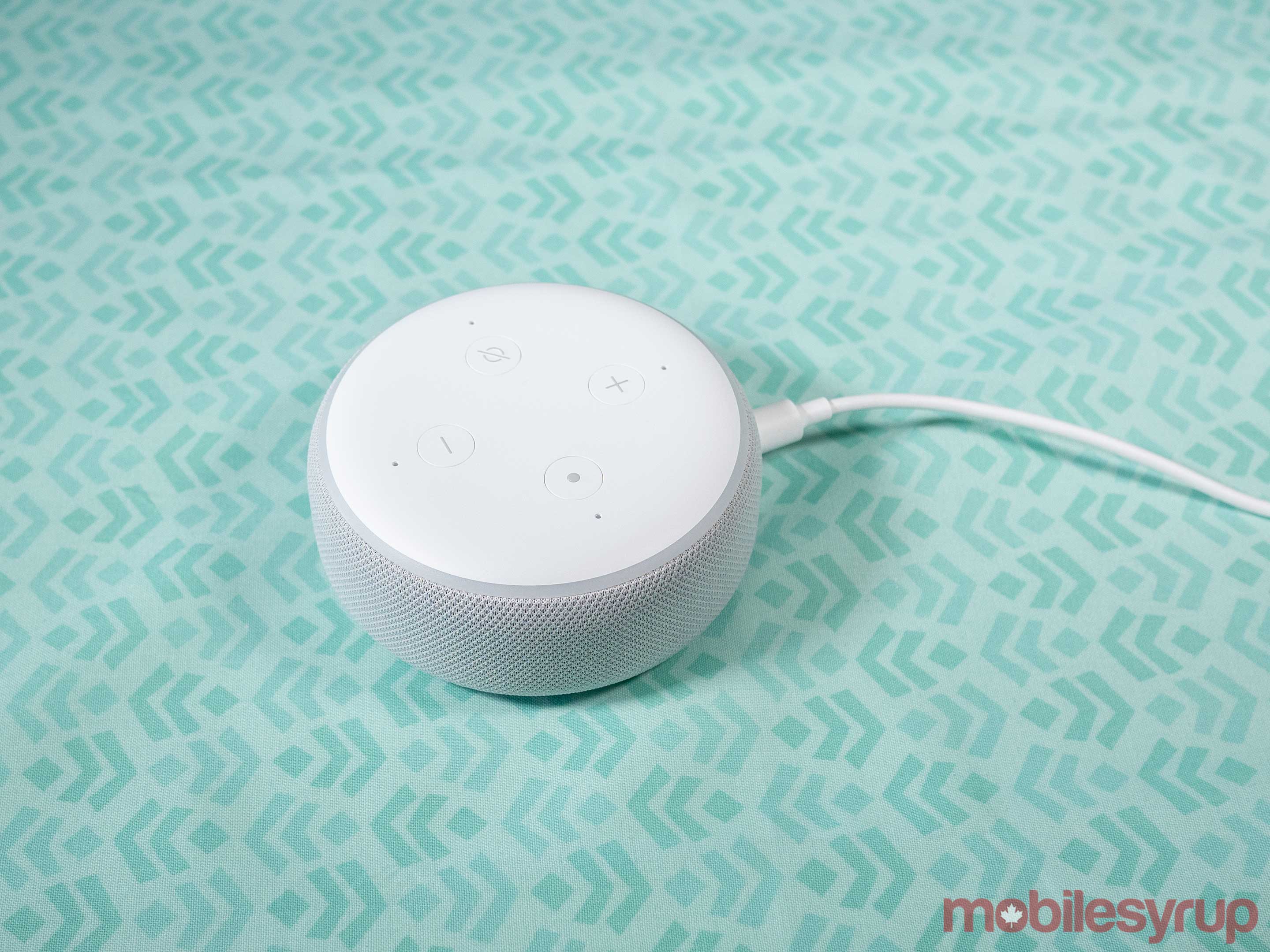 The latest iteration of the Echo Dot is by far the best version of Amazon’s pint-sized smart speaker, though it still lacks 3.5mm audio input. However, Bluetooth connectivity with external devices is still possible.

The tiny smart speaker’s audio quality is substantially improved over the 2nd-generation version of the device, as well as a cut above the generally horrible sounding Google Home Mini. That said, the new Dot only features a single 1.6-inch 360-firing speaker. The improvement this year is the 360 sound, which results in fuller audio that’s surprisingly capable of filling a room despite the Dot’s small size.

Further, the new Dot responds to voice commands more consistently when compared to earlier versions of the smart speaker thanks to its more sensitive array of four far-field microphones. The Dot has also been revamped on the outside, thanks to a fabric cover that moves its design more in-line with Amazon’s 2nd Gen Echo.

Still, if you’re the type of person who cares about audio quality, the Echo Dot isn’t the smart speaker for you. The new Echo Dot is available in ‘Charcoal,’ ‘Heather Gray’ and ‘Sandstone’ for $69 CAD. 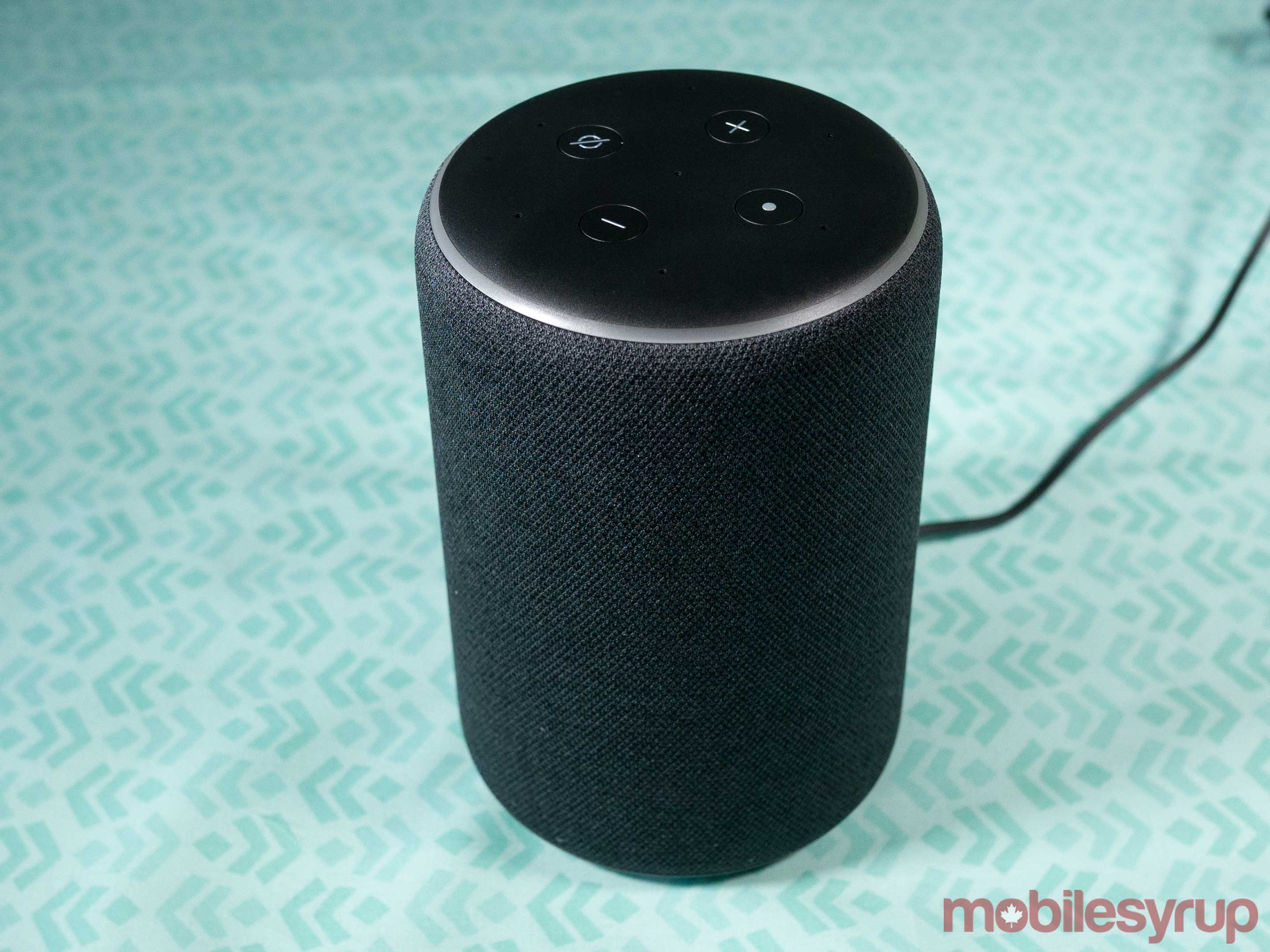 The new Echo Plus features a friendlier, fabric wrapped design when compared to its 1st-generation counterpart. The latest version of the speaker still features Zigbee home automation hub integration, though a new built-in temperature sensor has been added to the device that could be useful if you have a smart thermostat.

Concerning sound quality, the new Echo Plus still features omnidirectional Dolby Audio and a 0.8-inch tweeter, coupled with a slightly larger 3-inch subwoofer. The speaker features noticeably more bass when compared to its predecessor, but lacks the high-end fidelity of other smart speakers like Apple’s HomePod or the Sonos One. In general, there’s a rather substantial gap between the way the Echo Plus outputs high and low frequencies.

The Echo Plus once again features a 3.5mm headphone jack, allowing it to be connected to external speakers or a pair of headphones. The Plus is also now capable of being paired with an additional Plus speaker for stereo sound. This feature also works with the Echo Dot and 2nd-generation Echo.

The new Echo Plus is available in ‘Charcoal,’ ‘Heather Gray,’ and ‘Sandstone’ for $199 with a free Philips Hue light bulb. 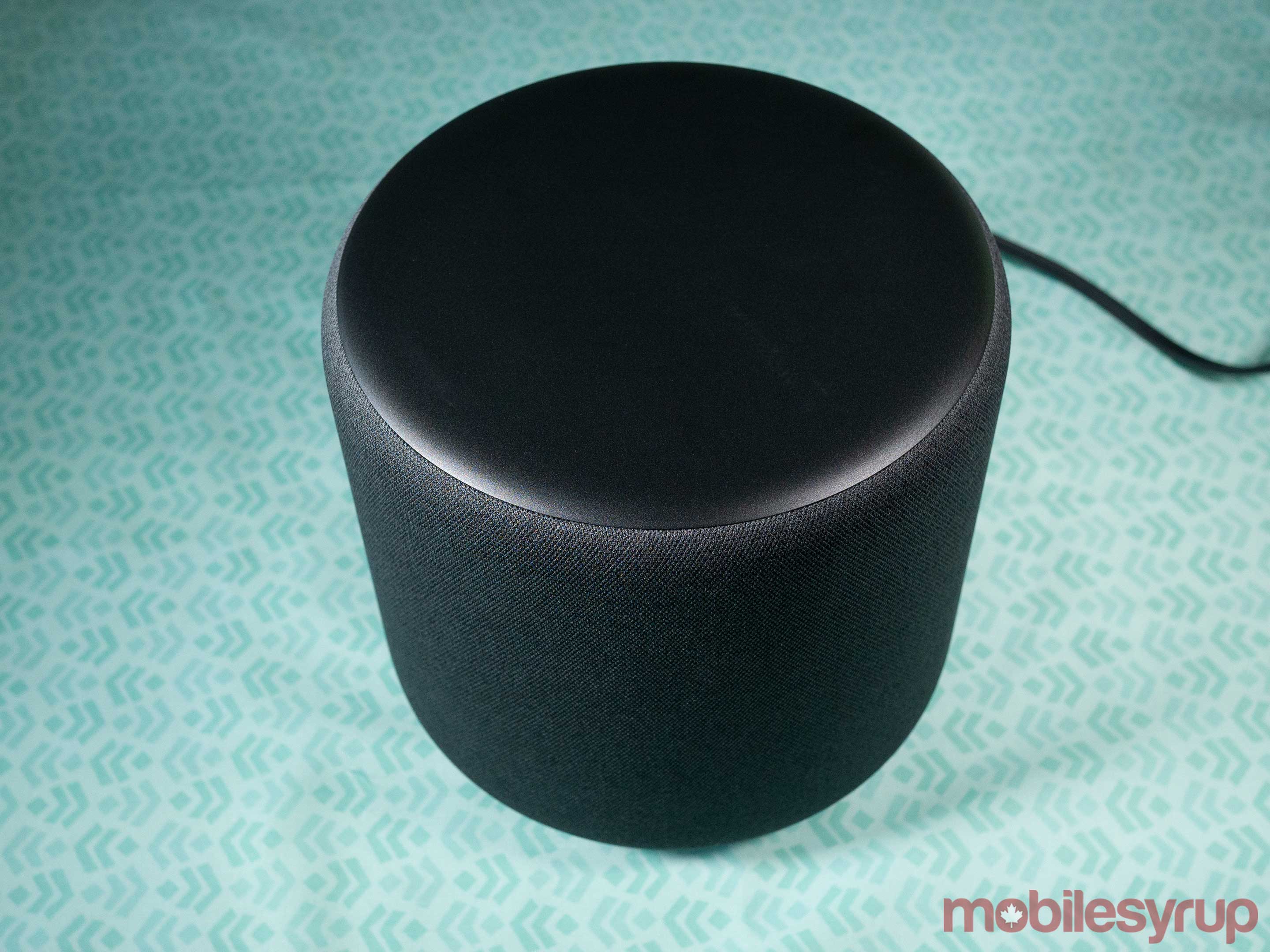 Given Amazon’s habit of not bringing products to the United States at the same time as Canada, it’s interesting the company has opted to release the Echo Sub in the Canadian market.

The Sub’s bass is deep, powerful and, at times, overwhelming depending on the genre of music you’re listening to. Spec wise, the Sub is down-firing and features a 100-watt amplifier pushing a 6-inch woofer.

The Echo Sub can be connected to a pair of two Echo speakers that are the same, for example, the Echo Dot or the 2nd-generation Echo, or with a wide range of Echo devices following the initial pairing. For instance, I connected the Sub with the Echo Plus, then set up multi-room audio with the Sub and Plus couple, selected along with the Show, Dot and 2nd-gen Echo. This collection of speakers resulted in the most impressive room-filling sound I’ve ever encountered.

Unfortunately, there doesn’t seem to be a way to control the Sub’s volume or intensity, which is a strange design decision on Amazon’s part. The Echo Sub also lacks a standard 3.5mm input plug.

The Echo Sub is priced at $169 and is set to release on November 19th. 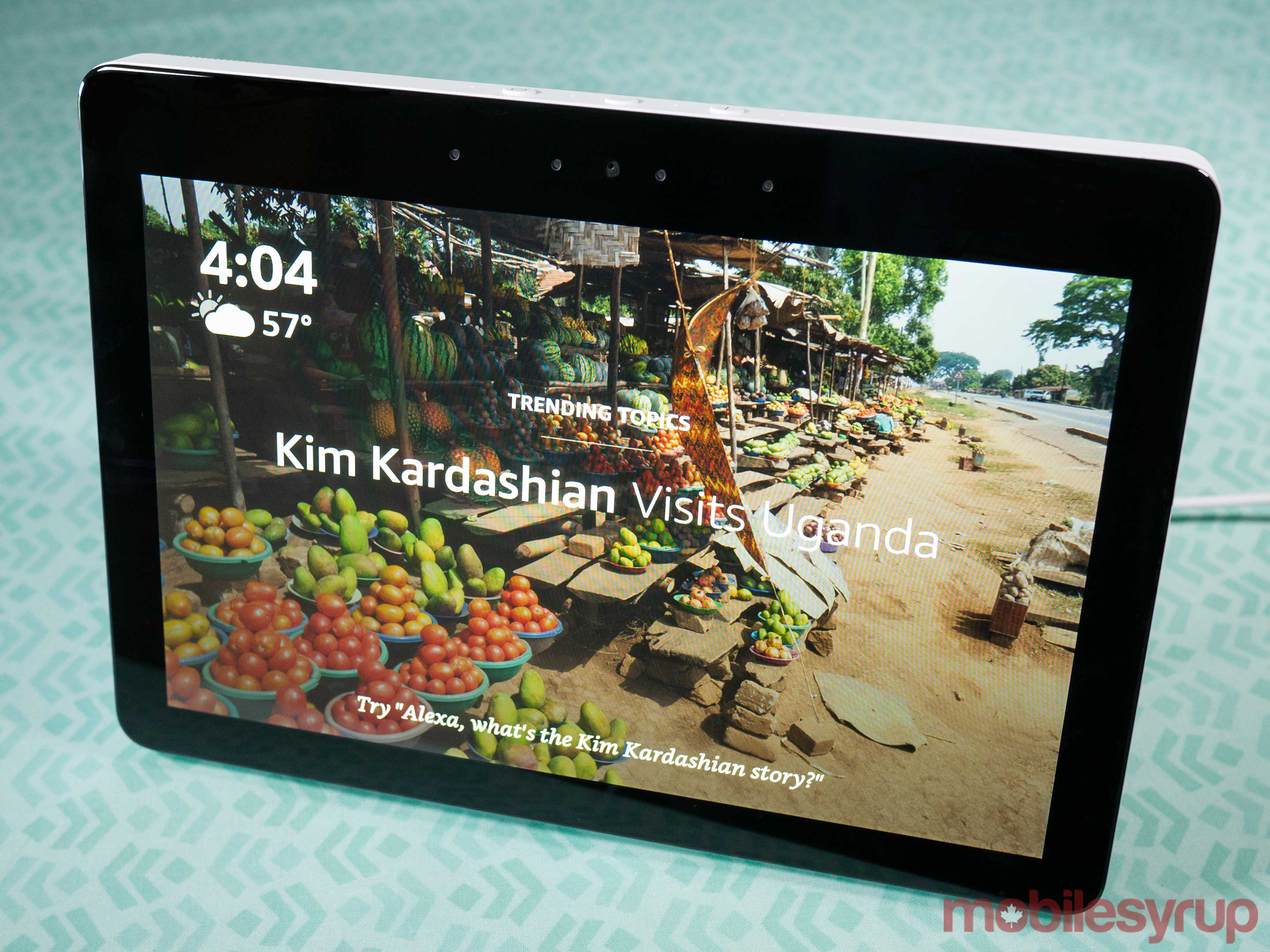 I can’t help but feel that Amazon Echo devices that feature a display, particularly the Show, are not as useful in Canada as they are in the United States.

Similar to the alarm clock-like Echo Spot, there are very few Canadian video Skills worth checking out, with CBC News and CTV News being the only two standouts. Further, while it’s great to have relatively easy access to YouTube unlike previous versions of the Show, the device’s version of Firefox is limited, mainly when using it to watch content on Google’s video-sharing service.

The device also doesn’t officially support Netflix, though it is possible to access a web version of the platform through the Echo Show’s built-in web browser.

Even trying to watch Amazon Prime Video content on the Echo Show is a frustrating experience. For example, I couldn’t find a way to watch the 4th season of Man in the High Castle, with the device launching the last episode I watched of the TV show regardless of how specific my voice request was. 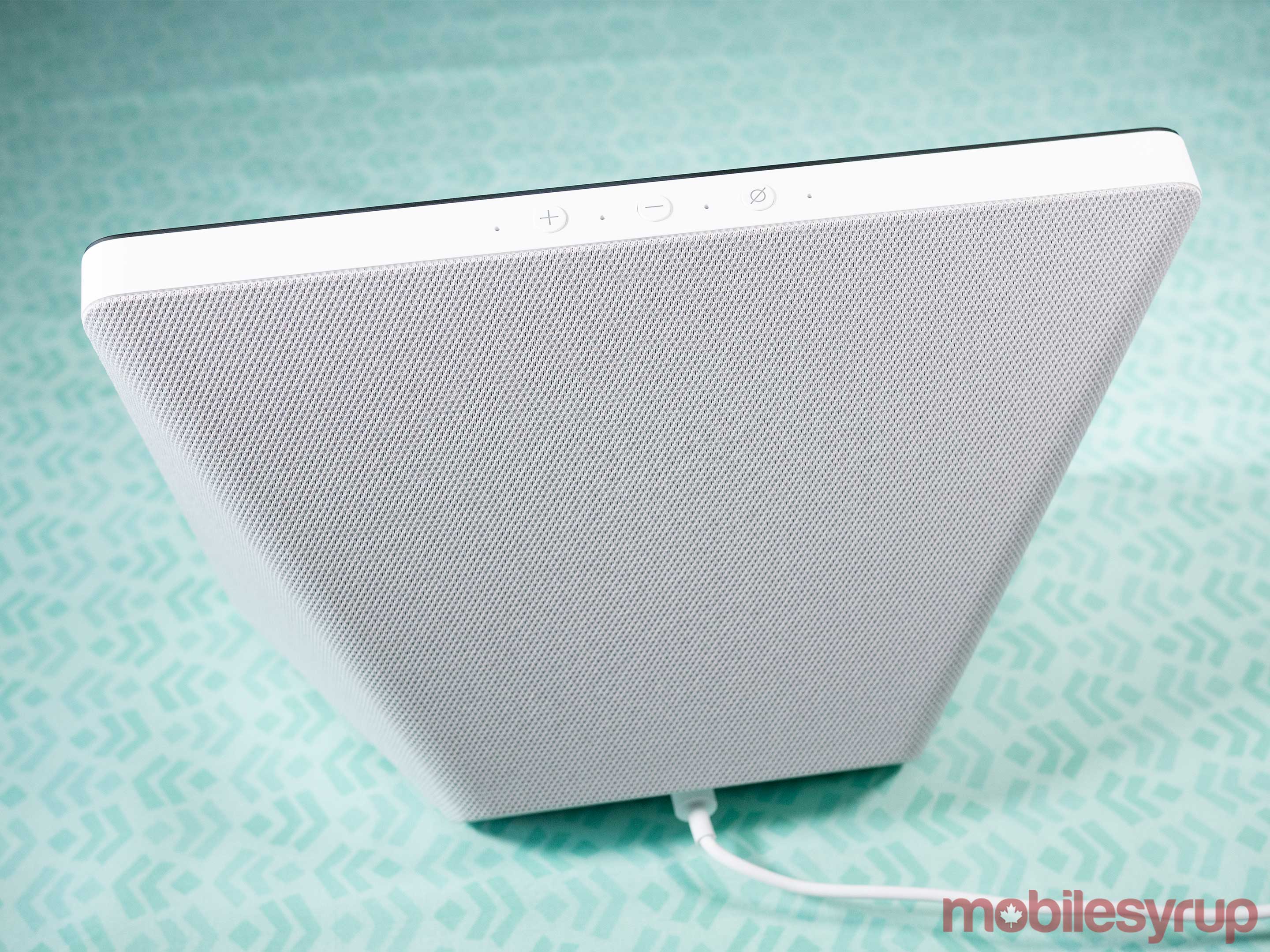 On the plus side, the ability to control connected lights via the Echo Show’s touchscreen is a welcome addition, as is the complete redesign of its aesthetic. The new Show looks less like an ageing device you’d find in a doctors office and now feels more in-line with other smart home devices thanks to its fabric covered rear and sizable display. Regarding specs, the Show features a 10-inch touchscreen that measures in at 1,280 x 800 pixels. The device also includes Zigbee smart home hub integration, just like the Echo Plus.

In general, the Echo Show outputs great sound that tends to be heavy on the bass, though this can be easily shifted through the device’s built-in equalizer. Finally, the Echo Show also features a 5-megapixel camera that supports HD video calling, though this isn’t a feature I have spent significant time testing.

Given that the Echo Show includes a display, it would, in theory, make sense for Amazon to allow the user to interact with the touchscreen more frequently, though that, unfortunately, isn’t the case. The Echo Show is controlled primarily through the same voice commands that work with other Echo devices.

With the Canadian release of Google’s likely more capable Home Hub still looming on the horizon, the Echo show remains a tough sell. The Echo Show with a free Philips Hue light bulb is priced at $299.99 in ‘Charcoal’ and ‘Standstone,’ and is set to ship on November 8th.