A first look at Mac Pro: Apple’s most powerful computer is here

The Mac Pro is the first modular Apple desktop in years 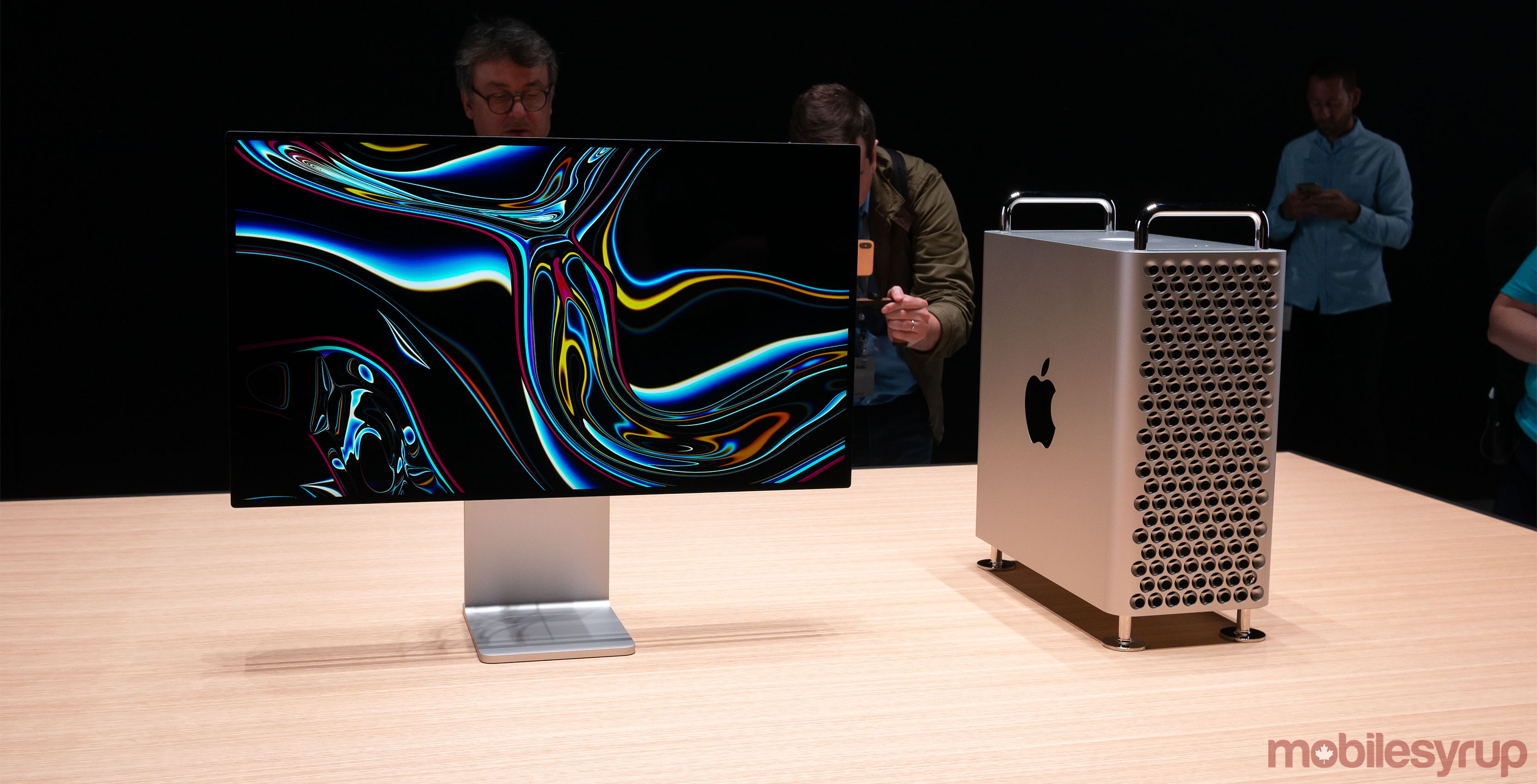 Apple’s first update to the Mac Pro since 2013 is an out there looking, expensive metallic beast of a machine.

I recently had the chance to take a look at and learn more about the new Mac Pro following the company’s WWDC 2019 keynote.

The long-awaited modular desktop, which starts at an astounding $5,999 USD (roughly $8,060 CAD), was shown off by Apple in a demo area in a variety of ‘professional’ settings, including a live photography studio, music mixing setup and a video editing bay.

Media weren’t allowed to play around with the computer but could ask questions and watch professionals from various fields Apple thinks will want a powerful macOS-powered desktop like this, work their magic with the Mac Pro. 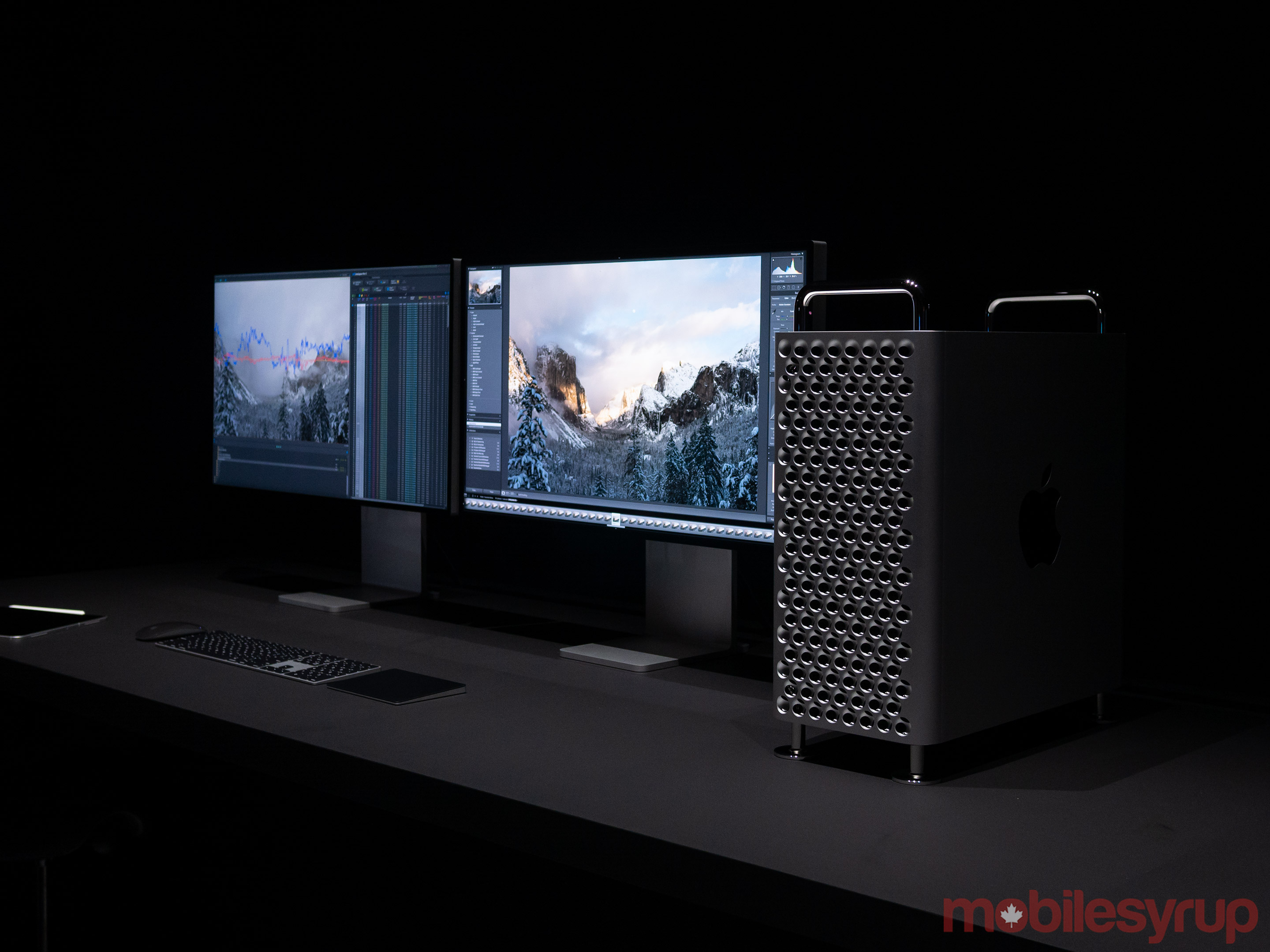 Though the ‘cheese grater’ look of the desktop has become an amusing running joke, I’m fond of the Pro’s design. Is it bizarre and bears a striking resemblance to something out of a Marilyn Manson music video or YTV’s The Zone from the mid-90s? A little bit, but it also helps the design stand out even more so than Apple’s other products.

There’s no mistaking the Mac Pro for a Windows-based desktop, and I think this is what Apple was going for with this borderline brutalist industrial design. 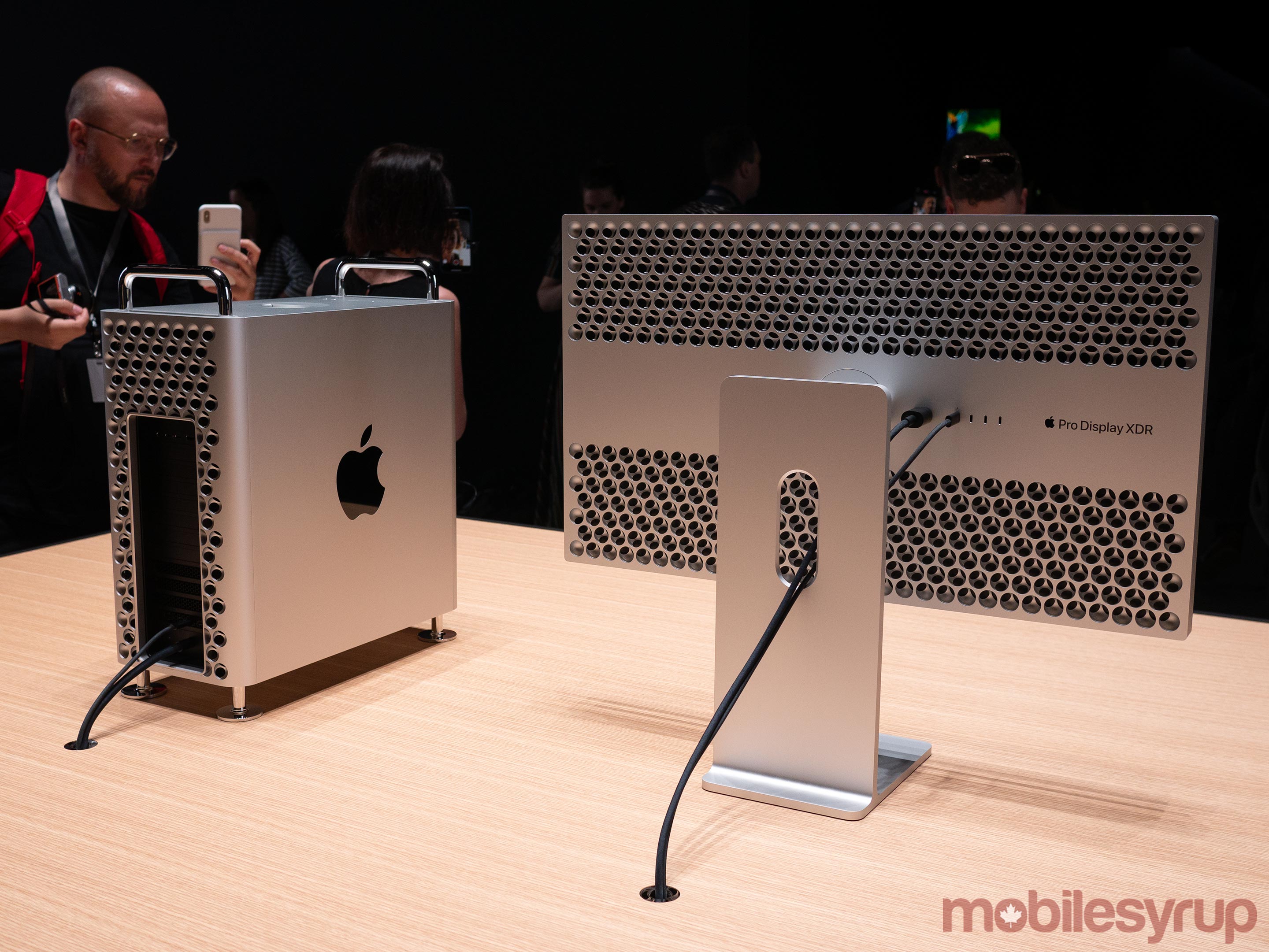 There are small Apple design flourishes to the Mac Pro’s aesthetic that can only be appreciated in person. For example, the grill on the front features a lot of depth and texture and isn’t a collection of generic holes. The same can be said about the rear of the Pro XDR Monitor Apple revealed alongside the Mac Pro. Further, there’s a stainless steel frame inside the desktop, and the enclosure’s legs can be swapped for wheels, making the Mac Pro easier to move around.

It’s possible to lift the handle on the top of the Pro to gain access to the computer’s modular insides, according to an Apple representative I spoke to at the event. Lifting the handle automatically shuts down the computer to prevent electrocution. It’s safe to say the thermal issues the previous generation Mac Pro suffered from will likely not be a problem with this new, complete redesign of the desktop. 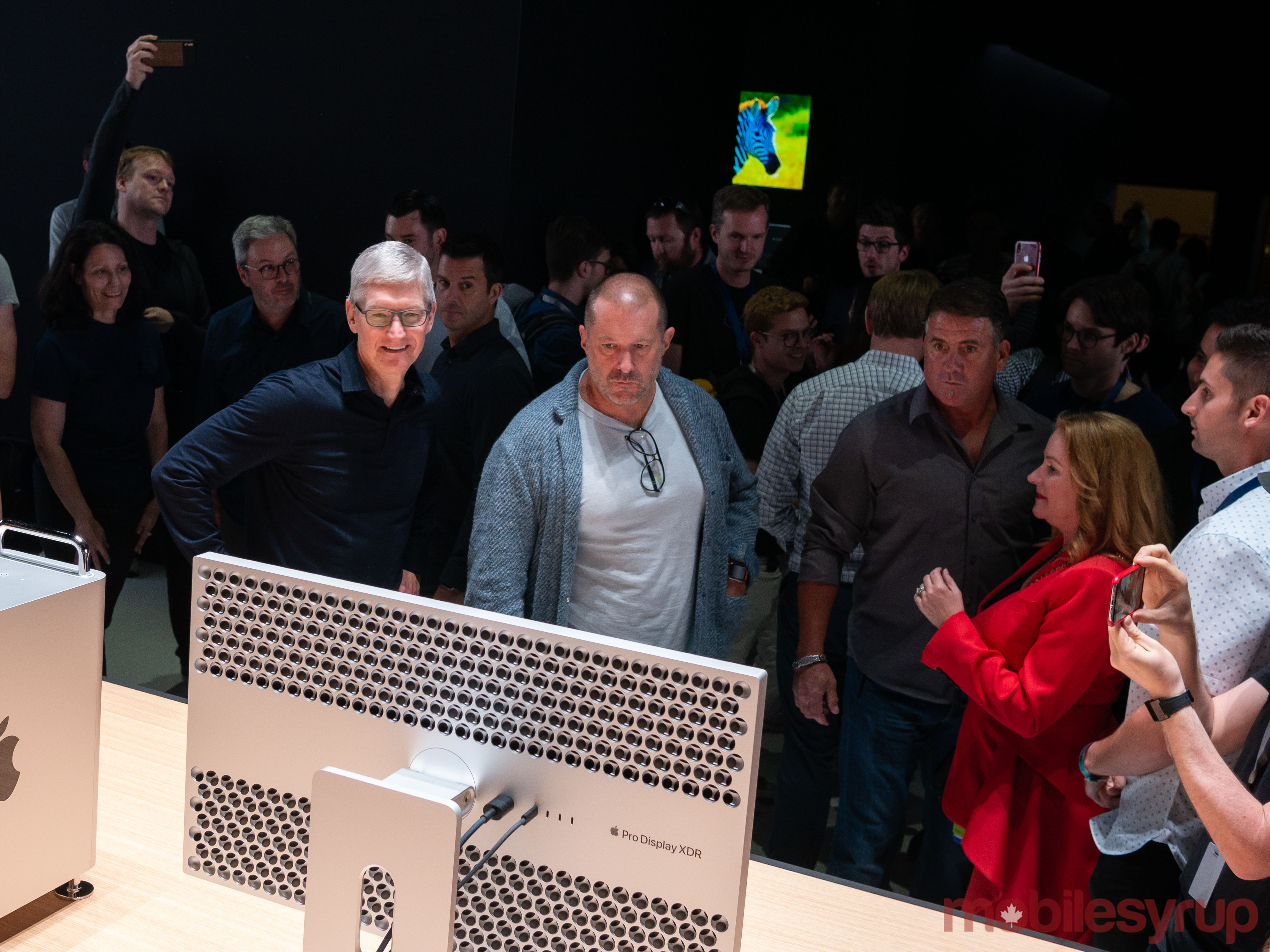 Specs-wise, it’s possible to kit out the Pro with up to 1.5TB of RAM, four GPUs and a 28-core, 56-thread Intel Xeon processor. The Mac Pro also features something Apple is calling an MPX module that plugs into the desktop’s PCIe slots. These modules give the computer graphical processing power. 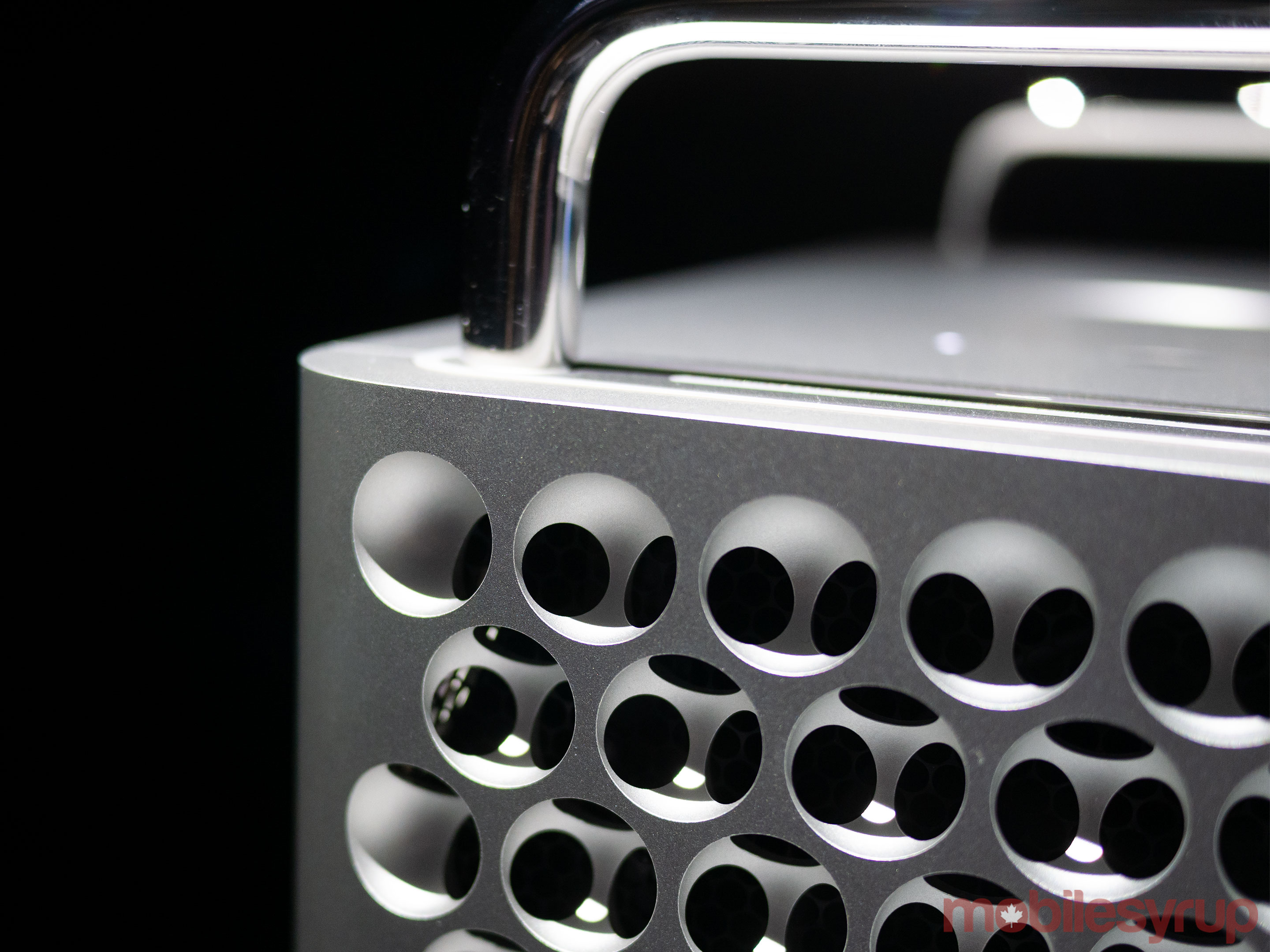 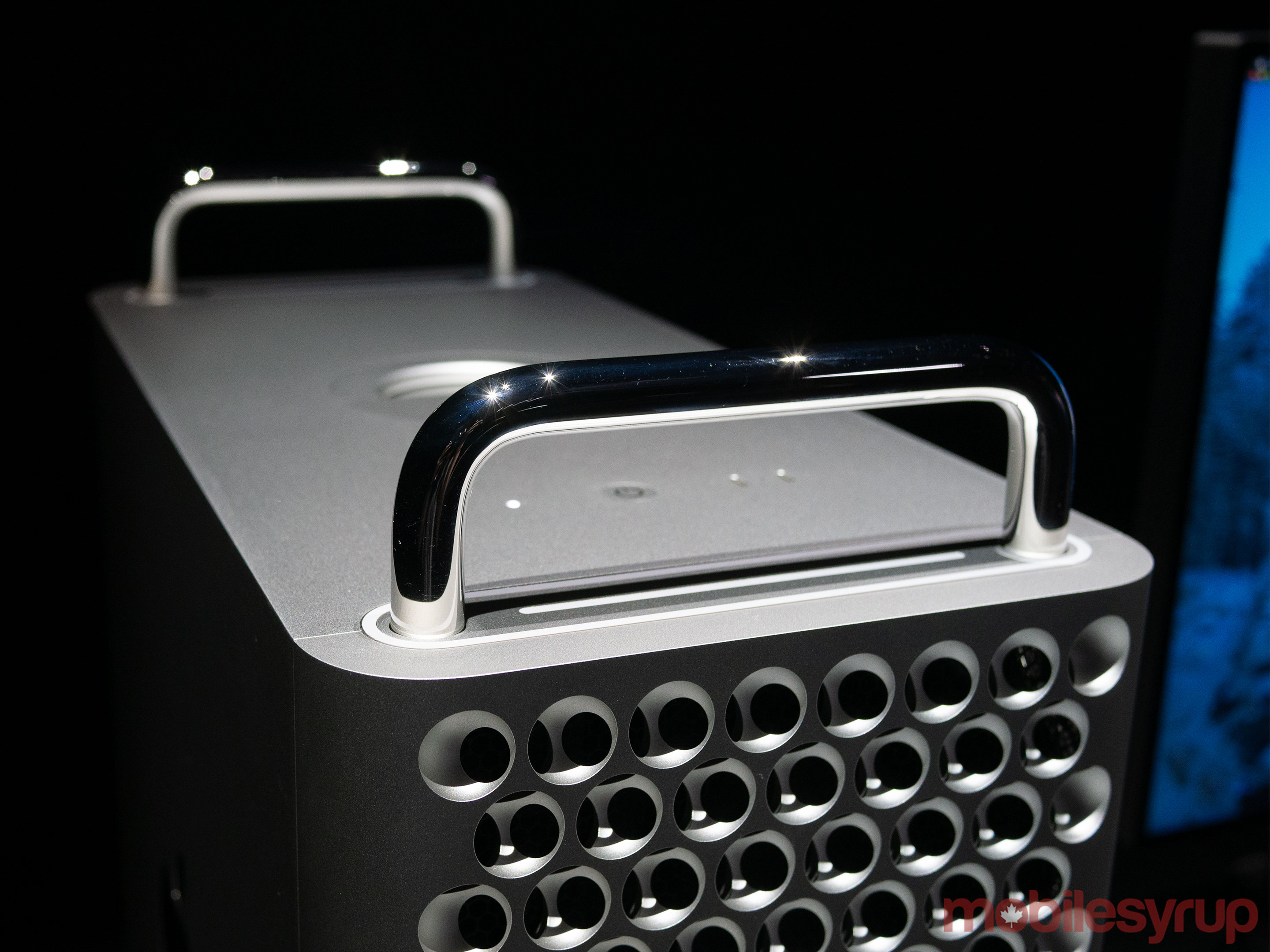 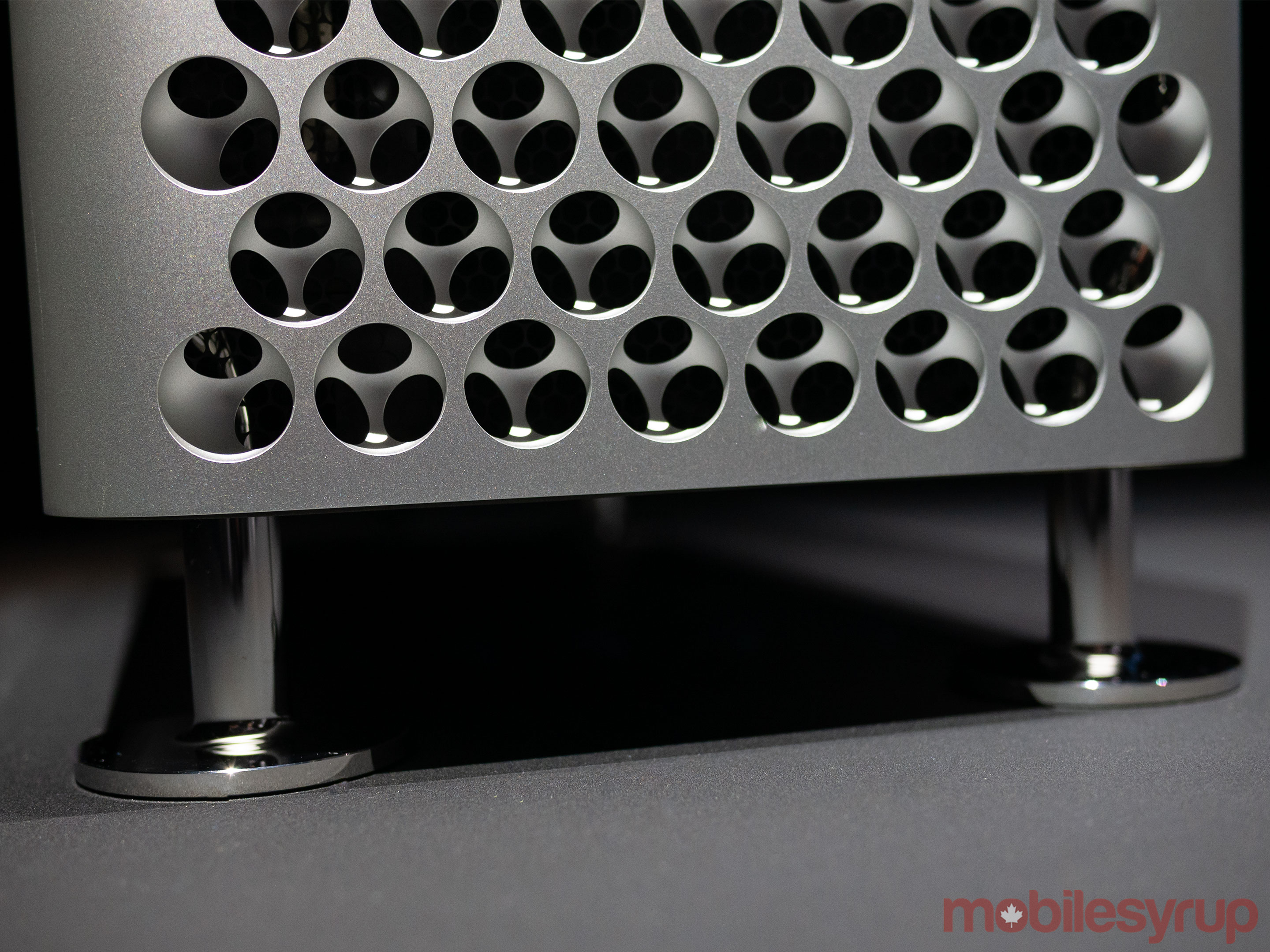 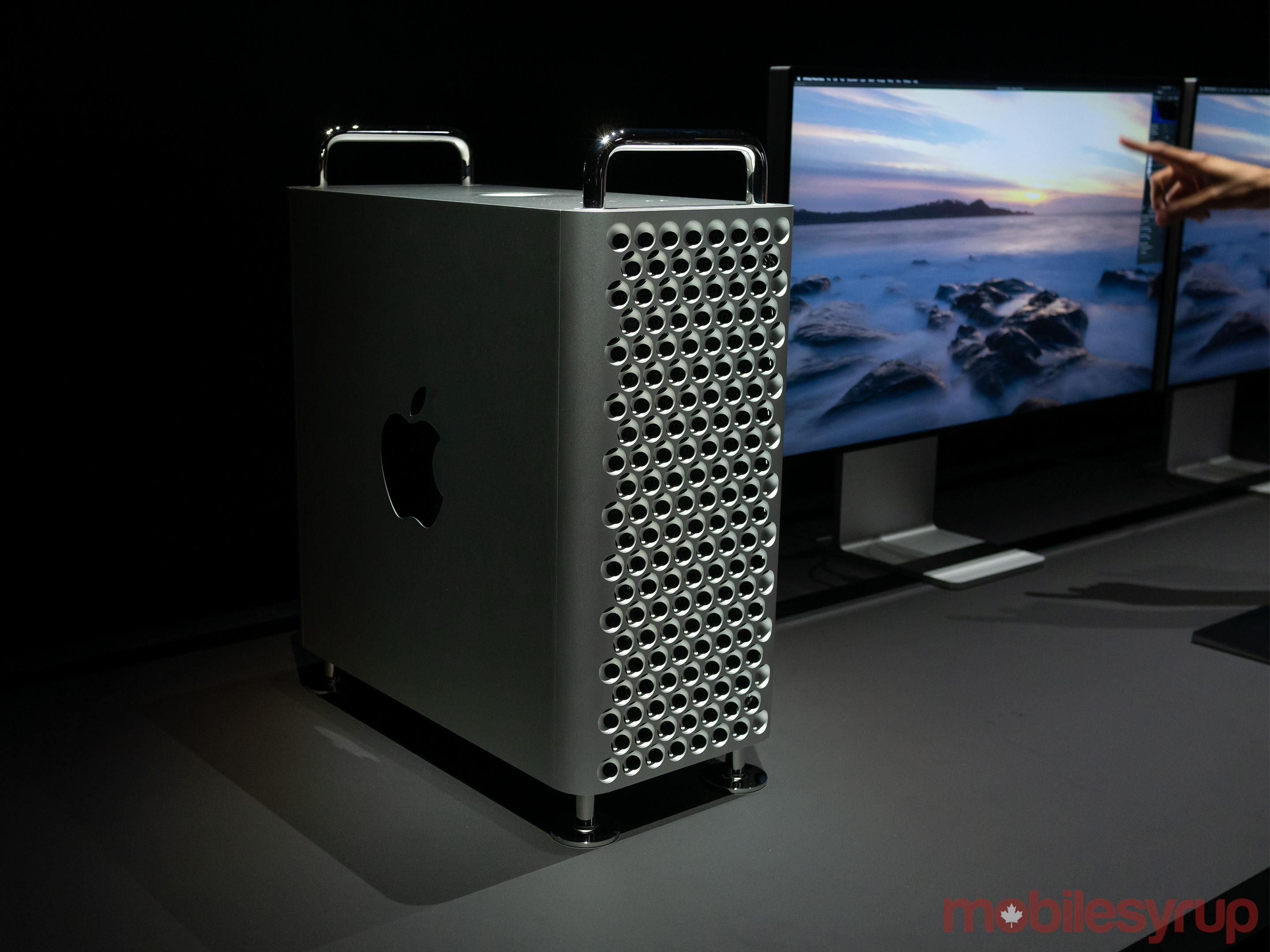 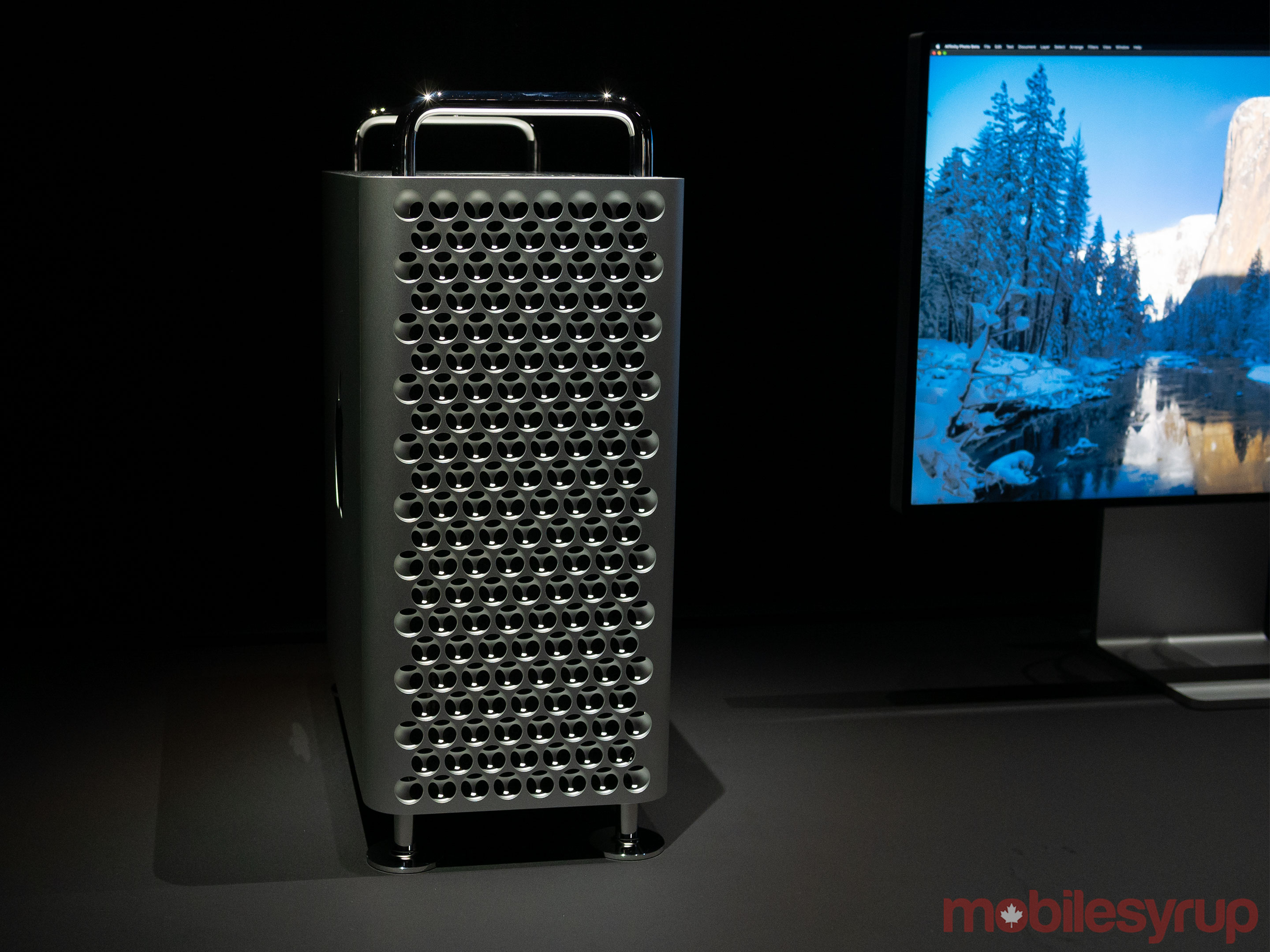 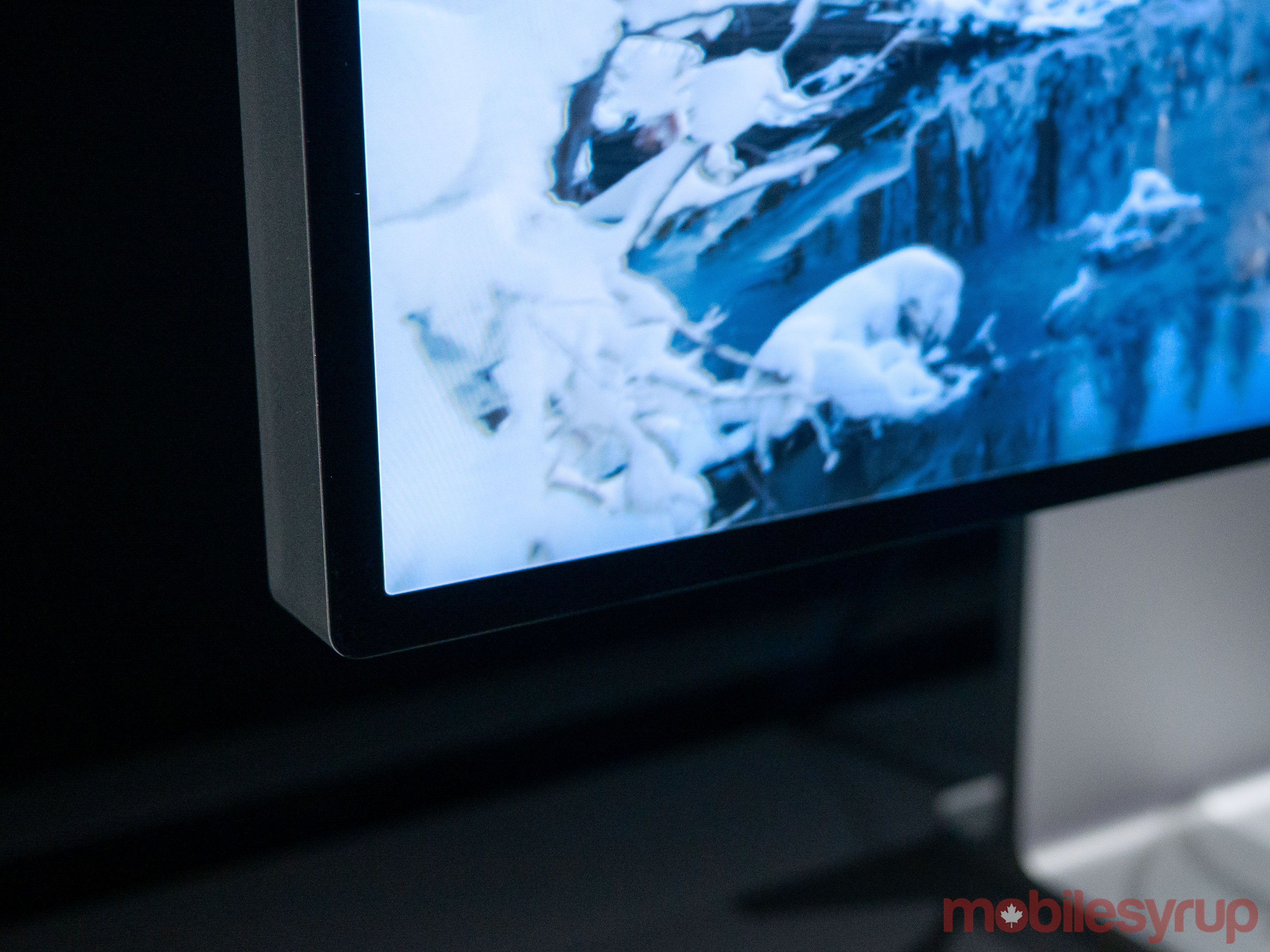 Apple also showed off its new Pro Display XDR in the same demo area, giving those in attendance a first look at the pricey 6K display.

It was challenging to get a good look at the screen in the crowded demo space, and I’m not sure I buy a specific demo that aimed to show the difference between an image with HDR turned on and off on the XDR display. To me, it just looked like the photographer that shot the picture took the photo at too bright of an exposure and needed to turn down the highlights. 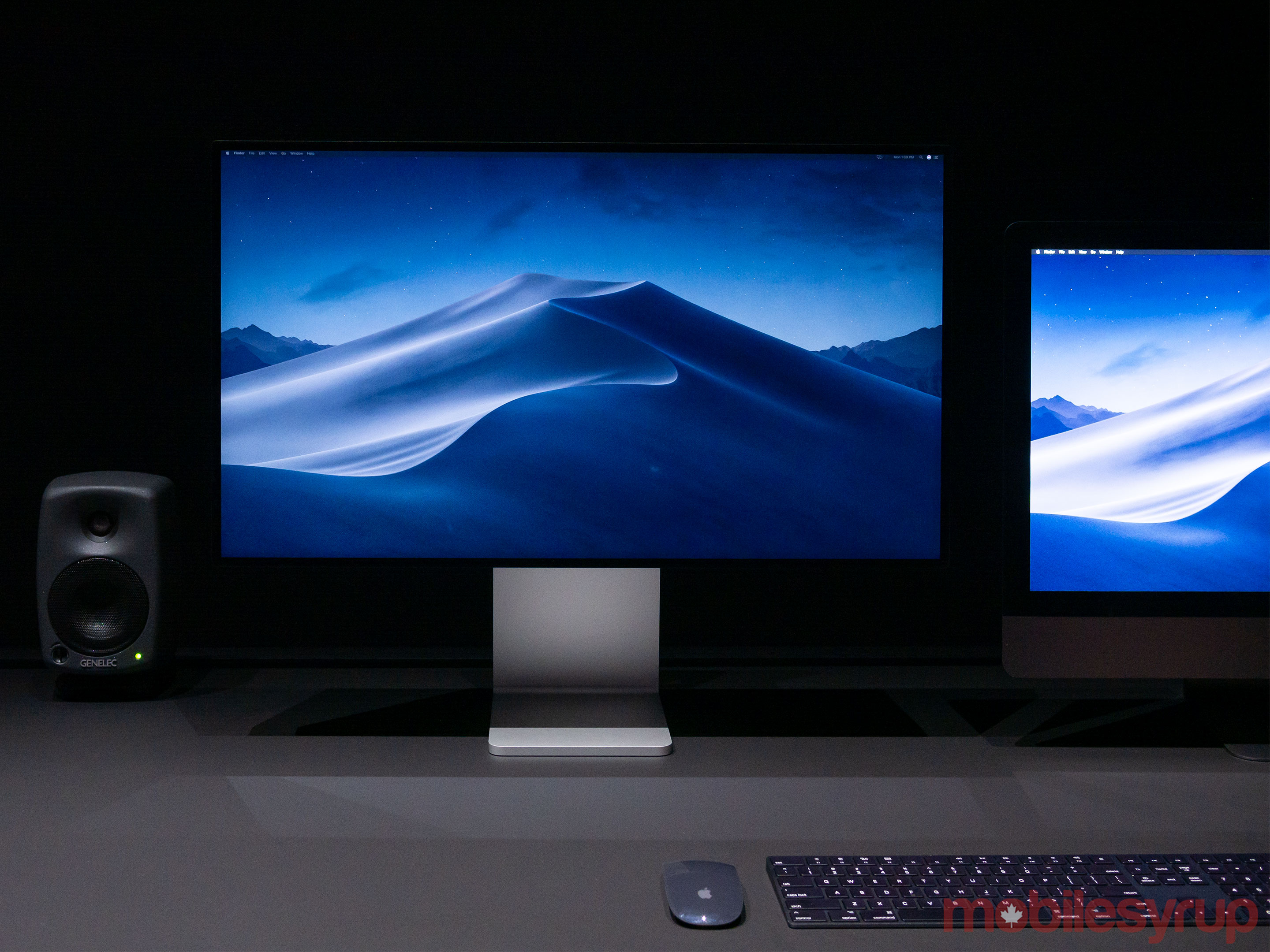 The tech giant also set up an interesting augmented reality (AR) demo in the same space that allowed media to interact with the Mac Pro in AR, exploring its different parts and unique construction.