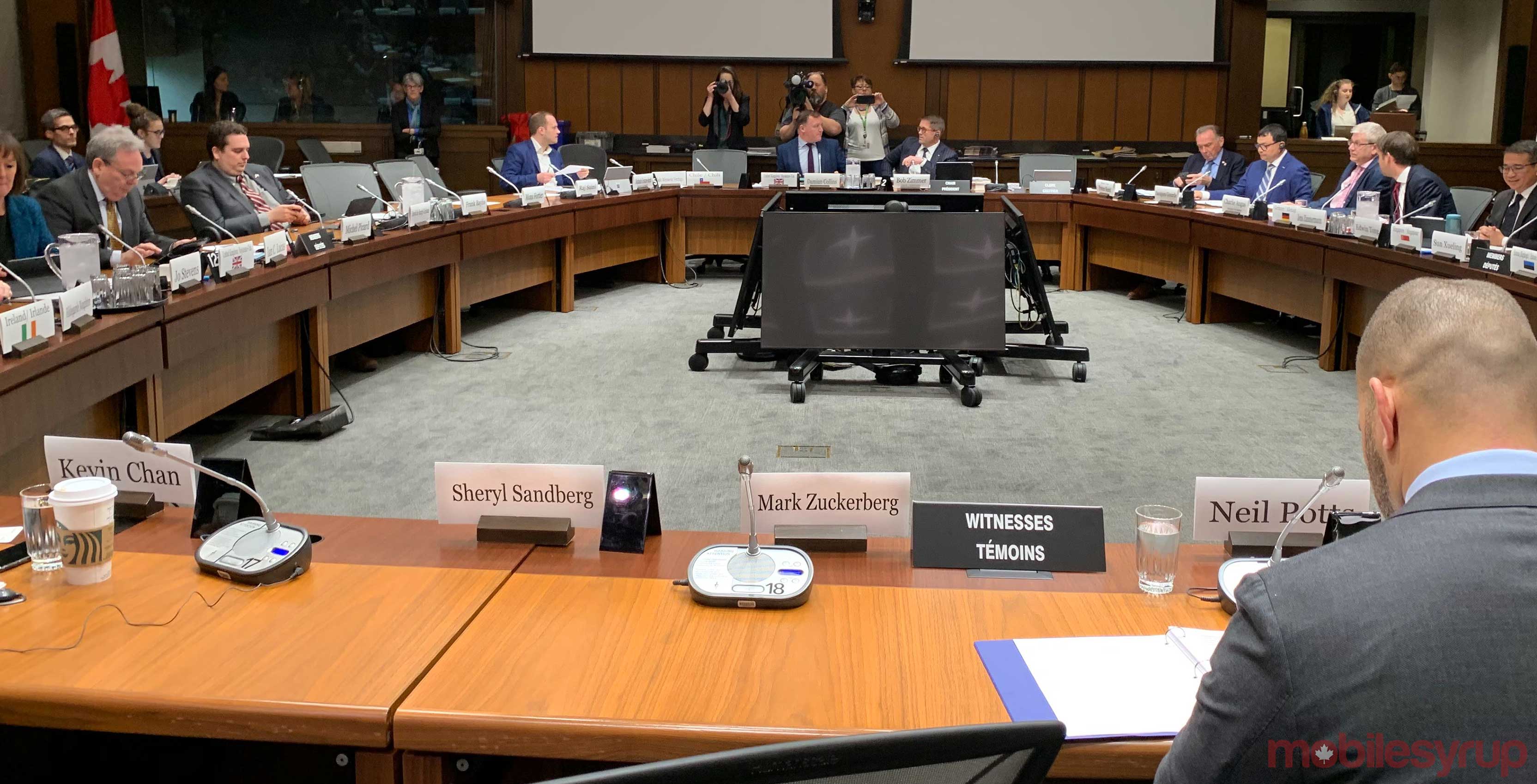 Parliamentarians fired questions to representatives from Facebook, Twitter and Google, regarding a range of issues with the intention of understanding how to prevent online extremism, misinformation and online elections meddling.

Specifically, lawmakers were concerned with how platforms deal with managing and removing doctored videos and fake political accounts, and creating an ad registry for Canada’s upcoming election.

The House of Commons Standing Committee on Access to Information, Privacy and Ethics hosted representatives from 13 other countries to take part in the second session of meetings of the international grand committee. The lawmakers say the next meeting is expected to take place later this year in November in Ireland.

Facebook’s CEO Mark Zuckerberg and his right-hand person, COO Sheryl Sandberg did not make an appearance to the committee. Facebook Canada’s global policy director Kevin Chan said to reporters before appearing in front of the grand committee that he was sent to represent Zuckerberg and Sandberg and intended to provide solutions to governments from around the world to combat online extremism.

Co-chair of Canada’s ethics committee, Charlie Angus, who is also an NDP Member of Parliament (MP) motioned to send formal summons should Zuckerberg or Sandberg ever arrive to Canada “for any purpose to appear before the committee at the date of the next meeting from the date of their summons.”

“Should they be served with a summons when the [House of Commons] is not sitting, that the chair reconvene the committee for a special meeting,” the motion read.

The grand committee also signed a joint declaration in an effort to “continue the work” of the committee and its objectives.

Canada’s co-chair of the ethics committee and Liberal MP Nathaniel Erskine-Smith said: “This declaration is the first step towards reasserting the internet as an open, democratic space for citizens, and towards a digital economy that works for more than the very largest companies. We are going to move forward with or without Mark Zuckerberg’s input.”

Facebook won’t take down doctored videos, will create oversight board

Asked by U.K. MP Damian Collins why the doctored video of U.S. House speaker Nancy Pelosi was not taken down, Facebook said it would notify users it is fake content but would not remove the content.

Though asked by St. Lucian MP Andy Daniel if fake accounts of St. Lucia’s president would be removed, Facebook said it would take down the content if it were notified.

“We have 30,000 working globally on this, we have 15,000 content moderators…we have a commitment to work with partners in civil society,” Neil Potts, also the global policy director at Facebook Canada. “If someone is being inauthentic we would remove it.”

During a press conference with members of the media after the meeting, Canada’s chair of the ethics committee, Bob Zimmer, who is also the Conservative MP, said answers were “inconsistent and it’s the whole problem.”

“They don’t’ give clear answers as to what the next step is,” Zimmer said.

Potts was not able to properly respond to when pushed by Parliamentarians why decisions to not take down doctored videos of politicians is not equivalent to trolls that control fake accounts.

Singapore’s MP Sun Xueling furthered by asking what kind of information shows up when doctored videos are shared.

Potts said that a third party fact checker would rate the video as being false and place a disclaimer on the content.

In the company’s opening statements, Potts indicated that Facebook intends to create an ‘Oversight Board’ by the end of this year that will be the “final level of appeal for what stays up and what comes down on the platform.”

This board, Potts said, would “govern speech on Facebook.”

Facebook has said it will take part in Canada’s C-76 election rules and has also decided to create a political ad registry.

At the committee meeting, Chan said Facebook intends to introduce an “intensive process” for those who plan to run ads.

He noted that the process to determine who can run ads will not “happen over an hour, it is a multi-day process.”

Canada’s Liberal MP Frank Baylis asked why it was easier for Google to find an ad using artificial intelligence, but it was so difficult to create a political ad registry.

“How is it possible you have technology to identify any ad, but you can’t have a program to [create a registry]?” Baylis asked.

Derek Slater, Google Canada’s head of government affairs and public policy, said that because its platform is so different from Facebook it would take an undetermined amount of time to try and launch an ad registry.

“[Technology] is changing so fast…given we are different….we would not be in a position to offer election advertising in this time but we would look to it in the future,” Slater said.

Twitter did not respond and still has not responded, but Democratic Institutions Minister Karina Gould said their deadline is June 30th.

Politicians also questioned on the sharing of information between Facebook, Instagram and WhatsApp, which according to Chan all use the same tech infrastructure to manage.

“With respect to the platforms, our terms of service does underline that we will share data infrastructure between various services and a big part of it, to be frank, is to ensure we are able to provide some degree of security measure across platforms,” Chan said.