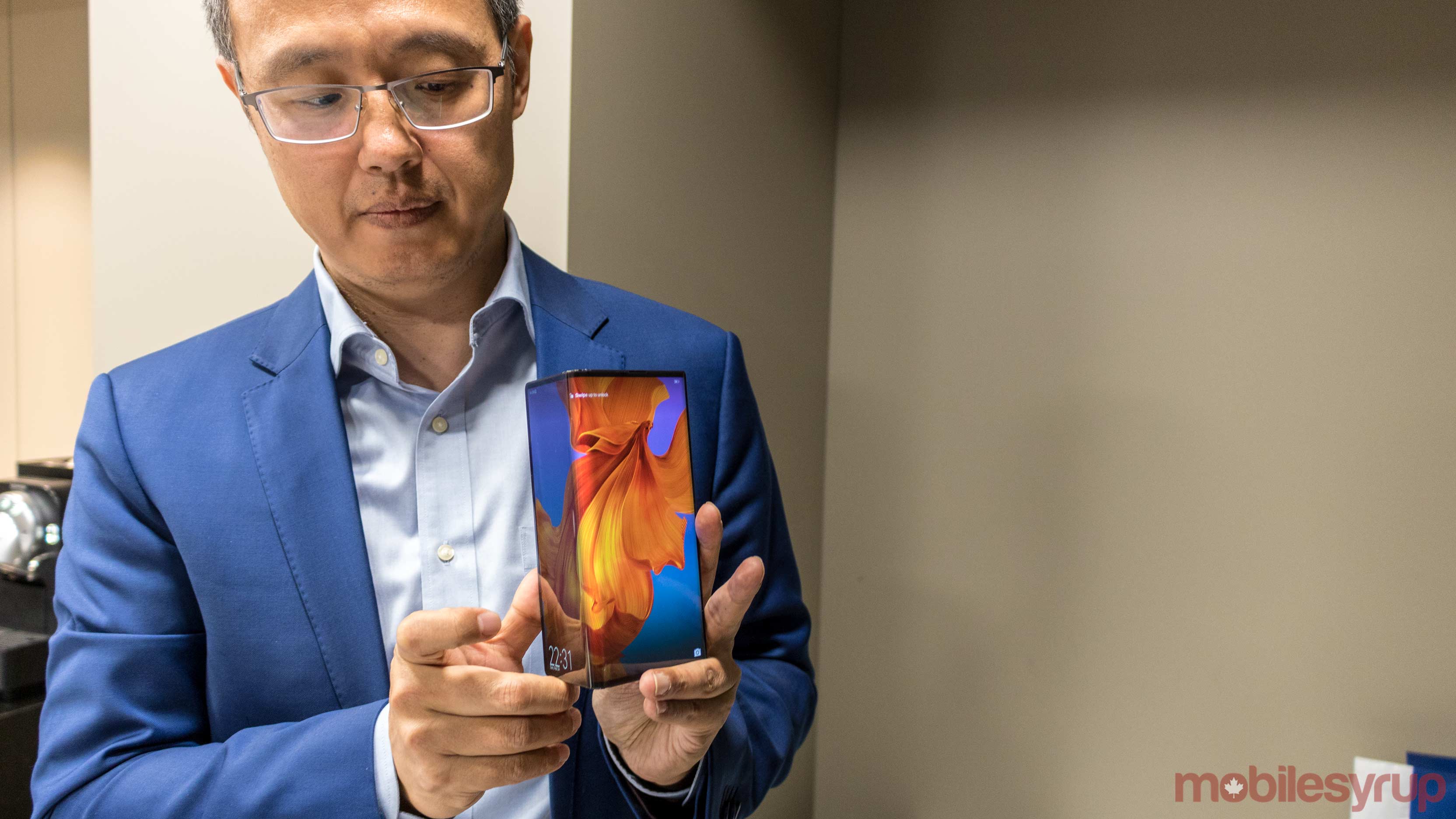 Huawei Canada will be releasing its 5G enabled foldable smartphone, the Mate X, in Canada in Q4 2019, the president of the Chinese tech giant’s consumer goods said.

During an interview with MobileSyrup, Kevin Li said the phone is expected to arrive in the latter part of this year, but a price has not been decided yet.

But in Canada, 5G network is not available yet and is expected to only roll out fully as late as 2021. Innovation, Science and Economic Minister Navdeep Bains announced spectrum auctions for bands in 2020 and 2021.

Li said that the Mate X can still work on 4G LTE networks even if 5G isn’t available yet.

But he also emphasized that the phone isn’t going to be sold in Canada with a marketing push on it being a 5G-capable device, but rather that it is a premium foldable phone.

“The Mate X has a different audience, it can support 4G and 5G, and this is the strategy to bring to Canada. I wouldn’t say Mate X is just for 5G,” he said.

Huawei Canada invited members of the media the same day to showcase what Huawei has been doing in terms of research towards 5G technology. That includes how the company is working with smart city technology, the agriculture sector, the Internet of Things and smartphones.

The Mate X was announced during Mobile World Congress in Barcelona in February.

The phone features a 6.6-inch display and when opened up, is transformed into an 8-inch borderless screen with an 8:7.1 aspect ratio and 2480 x 2200 pixel resolution.

At the time of its announcement, Huawei was quick to compare the Mate X to Samsung’s Galaxy Fold, pointing out that the Mate X is both thinner and features a larger display.

With respect to the Galaxy Fold, the South Korean-based manufacturer recently revealed that the device’s official release date has been pushed back. Originally, the company was slated to release the phone on April 26th.

Reports emerged that the display featured in the Galaxy fold started to fail in several review units. Some issues were related to a “protective layer” being removed from the display, while others related to what seems to be the screen being outright faulty in other ways.

Li was careful in responding to Samsung’s issues.

“You are right, they wanted to be the first one [to release a foldable phone, but] we respect Samsung. This is a smart area, they are smart…they’ve worked in this area for a while,” Li said.

“But on the other side for Huawei, we want to put lots of money into research and development.”

Li said that with the Mate X, Huawei has pushed back its release date to ensure the quality is up to standards and that it complies with cybersecurity concerns.

“For the foldable phone, we know the quality is good, but why we have not urgently launched after the announcement is because we want to keep doing research in the quality. For us, quality is the number one priority over everything,” he said.