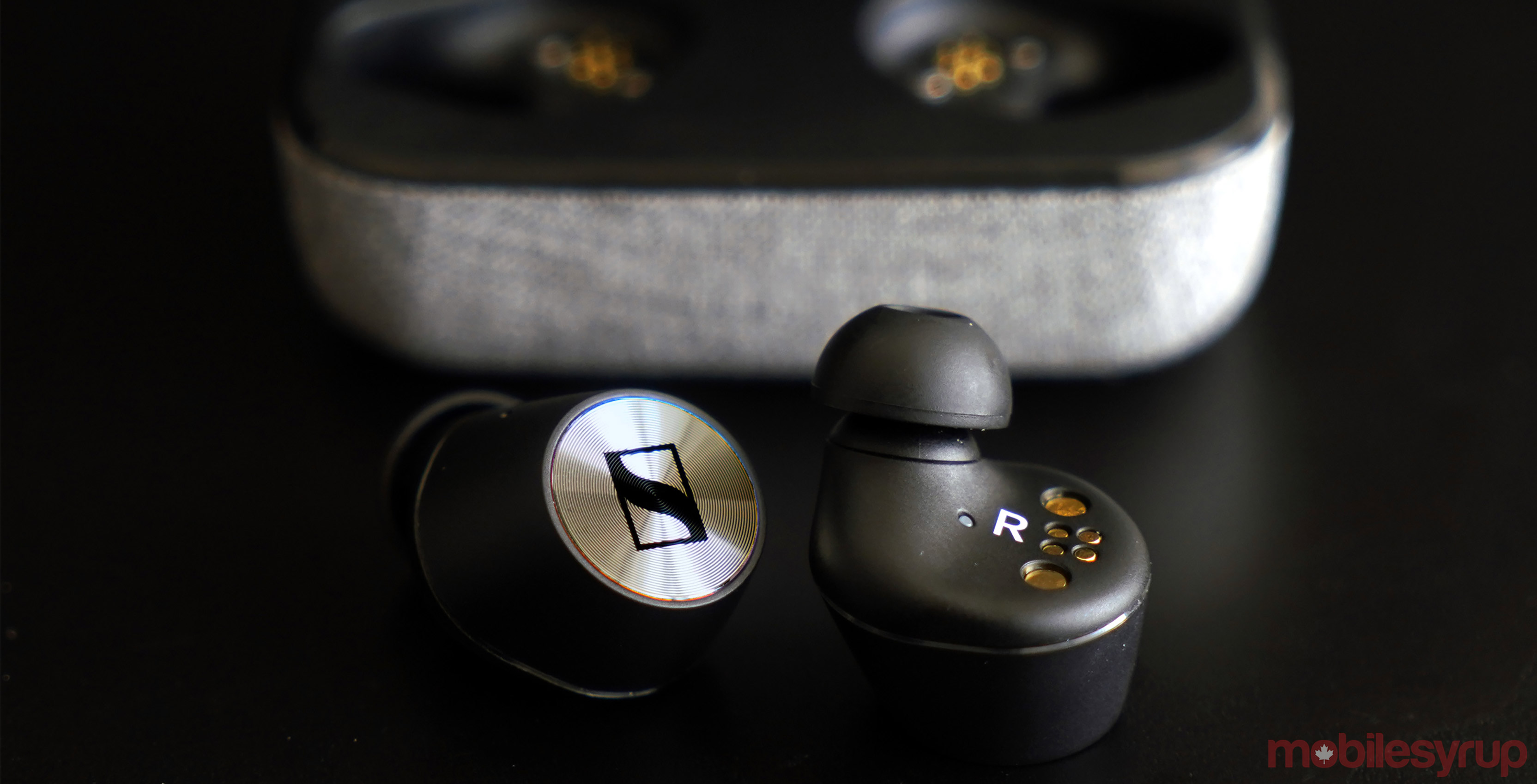 True wireless earbuds abound these days, but despite all the choice, finding something good isn’t all that easy. There are options for the budget-conscious, though they come with trade-offs warranting the lower price.

Sennheiser’s first crack at true wireless with the Momentum is designed to evade these issues. For starters, they’re far from cheap at $379.99, and catered to the crowd that care about how music sounds. Whether they can withstand a sweaty gym workout or run is another story I’ll get into later. 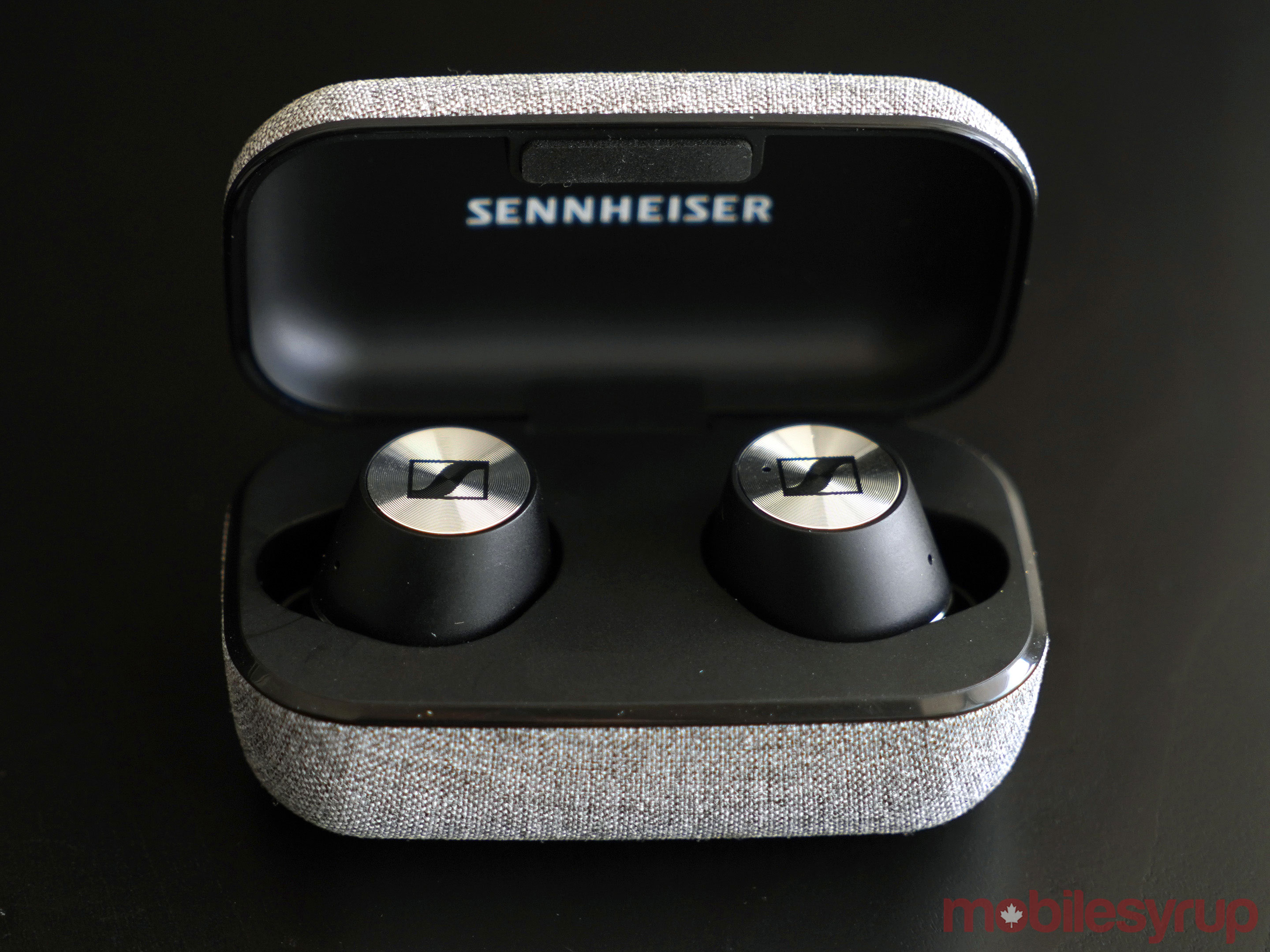 When compared to Apple’s AirPods, there just is no comparison. Sennheiser trounces them in audio fidelity, but I would expect that much from a pair that costs a lot more. Maybe Apple will be able to close the gap with the rumoured new iteration coming later this year.

The more apt comparison here would be to the Jabra Elite 65t because it’s a more even match. If you want good sound and are willing to spend some money, the Momentum True Wireless are definitely worth a look. 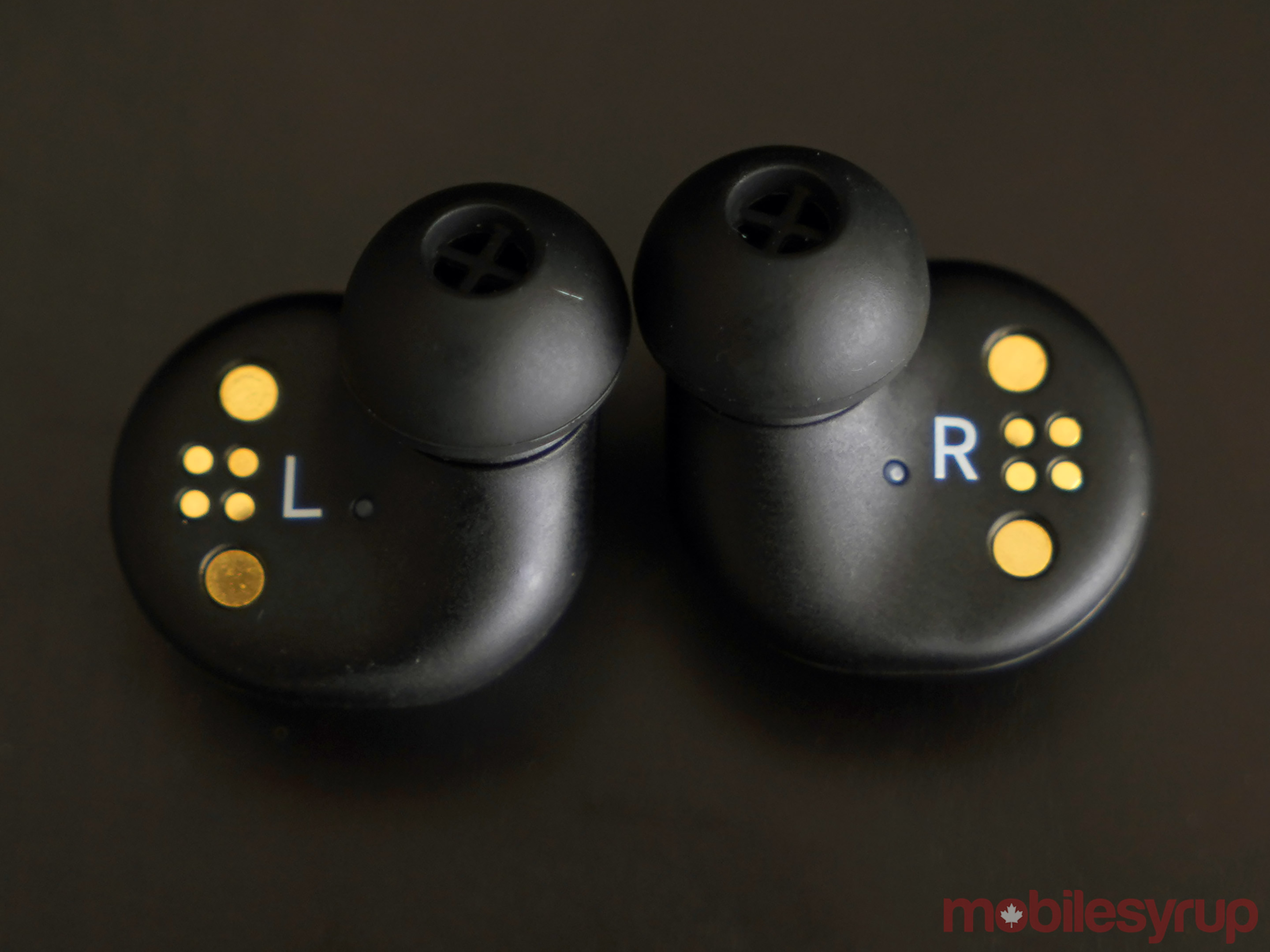 Off the bat, I will say Jabra and Apple have one key advantage out of the box: their respective charging cases are more pocketable than Sennheiser’s. Sure, the fabric-lined case is elegant and resembles something wealthy people might use for earrings or something else expensive, but I would have liked it to be just a little nimbler. Nice to see that it uses USB-C at least.

The reason for the added girth comes down to the form factor of the earbuds themselves, plus the battery inside the case itself. Thicker than several others on the market, Sennheiser tried to pack in whatever it could into each earpiece.

Engineers put in newly-developed 7mm drivers, noise-cancelling dual mics (though no active noise-cancellation) and touch-based controls on both earbuds. They are solidly built, with IPX4 water-resistance, so they’re pretty fragile beyond an odd splash by the pool. Sweat-resistance, on the other hand, isn’t a problem.

Some of the operating nuances include sensors that pause music once you remove either earbud, along with a Transparent Hearing mode that allows in ambient sound without interrupting audio playback. A voice will note when the earbuds connect out of the case. Put them back in the case, and they shut off immediately.

Sennheiser also developed a companion app for iOS and Android called Smart Control to help with setup and customization, which I’ll touch on. 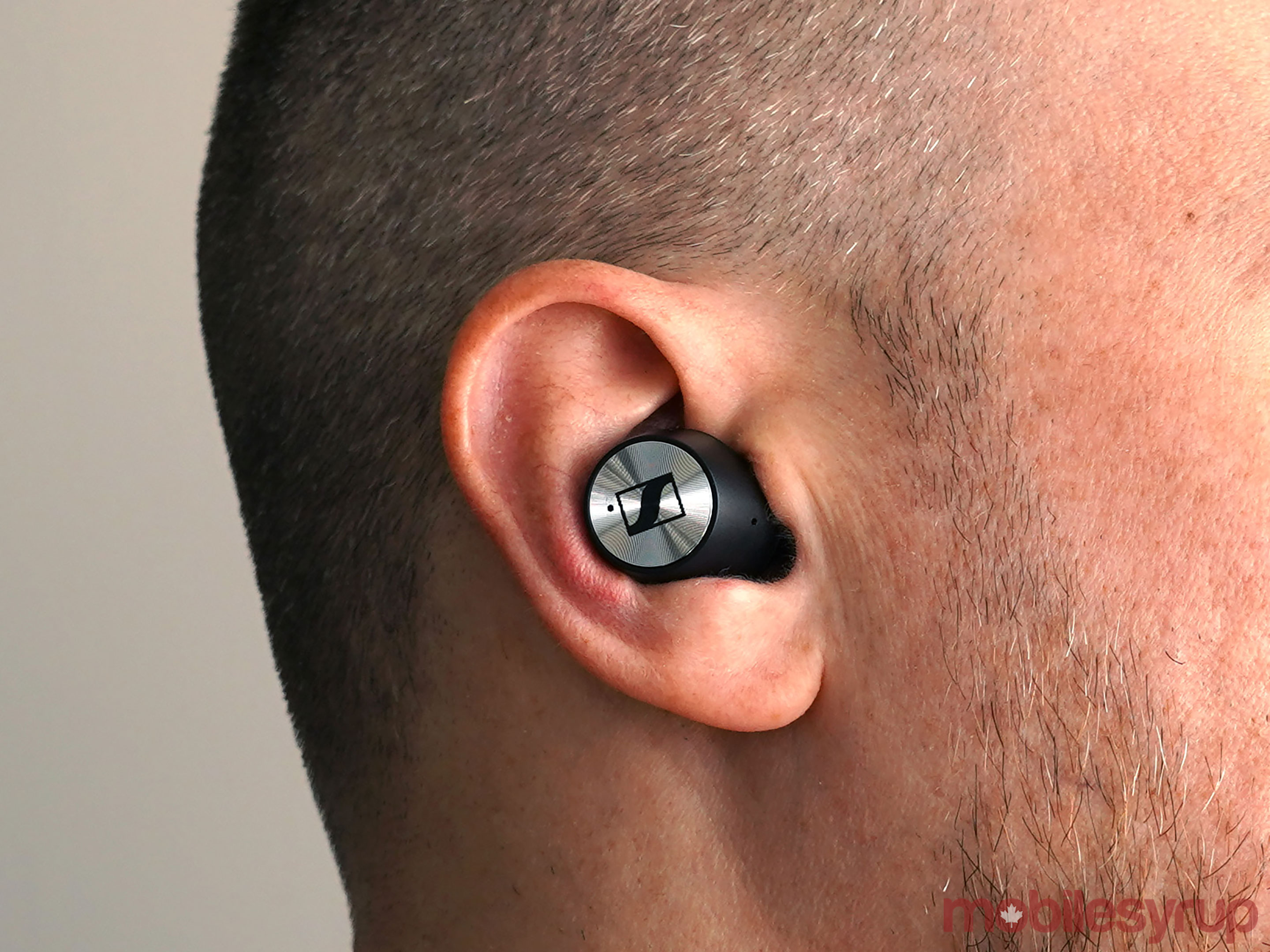 There are four different sizes for the tips, going from extra small up to large. Pairing mode is easy, too. I just pressed both earbuds for five seconds to start it, added it to the Bluetooth settings, and that was it. The free Smart Control app facilitates this, so you can just go that route to speed up the process.

Despite their relatively larger size, I never found the Momentum’s to be uncomfortable. They did stick out of my ears more, but never found them any more conspicuous than the AirPods usually are out in the wild. The included tips are varied enough that you should find a good seal. How well the earpieces themselves fit is hard to say, given how everyone’s ears differ. I do suspect, however, that smaller ears will be a tougher fit for these things. 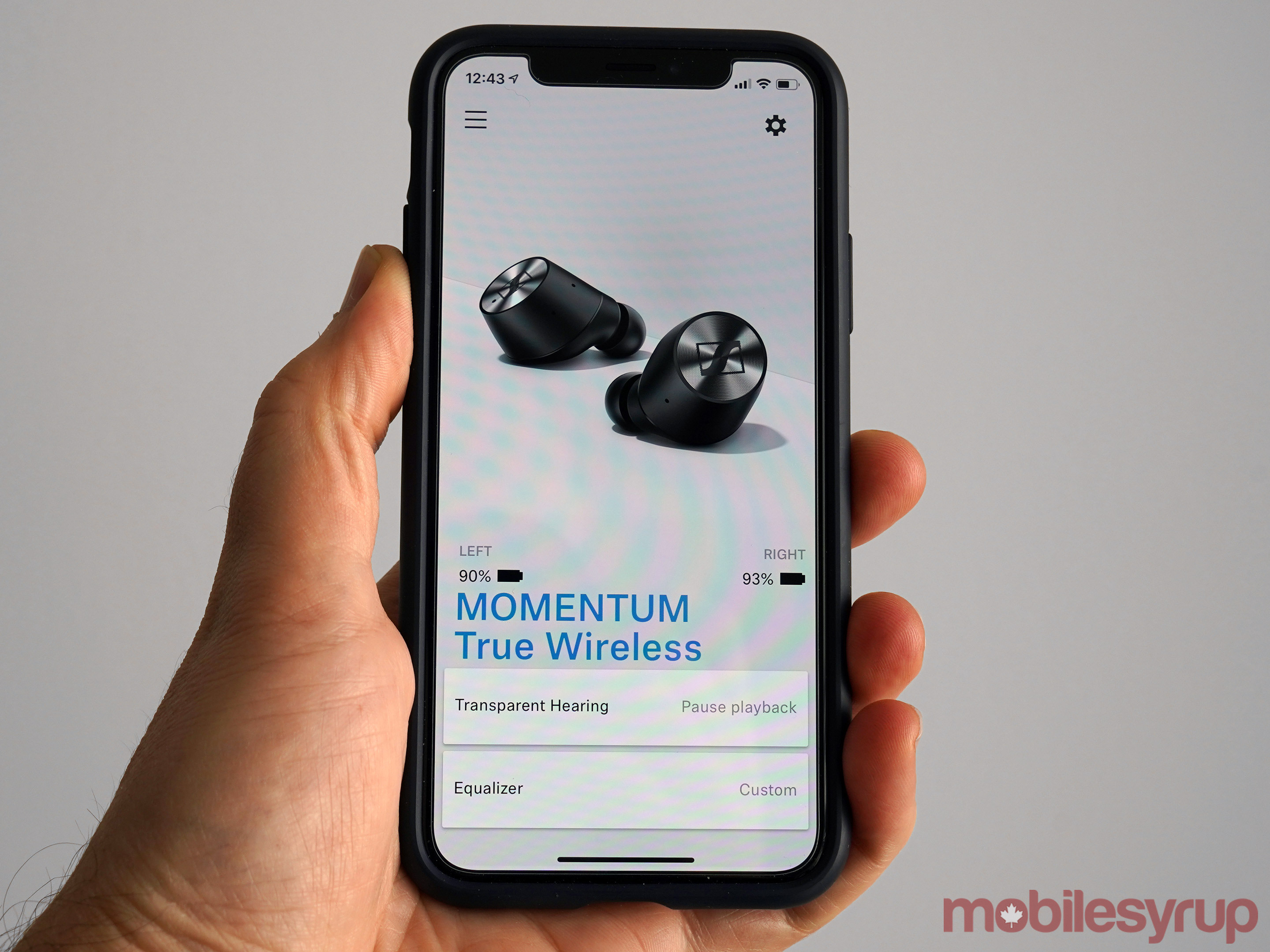 The app isn’t quite as deep as what Jabra has done with its true wireless earbuds, but there are some useful tweaks. You can turn Transparent Hearing on or off through it, and access a basic equalizer. It’s not all that intricate, but it’s pretty effective in its own right.

The default setting is a neutral centre between bass, treble and highs and mids. Select up or down and the sound changes. Key to this is the white circle highlighting your selection. Move that around freely and you can configure the sound even more to your liking.

The settings section (gear icon) offers a few other choices. Again, by default, Smart Pause stops music once you remove one of the earbuds from your ear. Auto-accept Call means you can answer an incoming call by just opening the case and taking the right earbud out. Voice assistant access, like Siri and Google Assistant, is also on. You can turn any of these off, if you like.

If you prefer a tone over a voice prompt, you can turn that off, too. And lastly, in the menu section, the default setting sees firmware updates come in over Wi-Fi rather than a data connection. At any time, the app will also indicate battery level for each earbud. 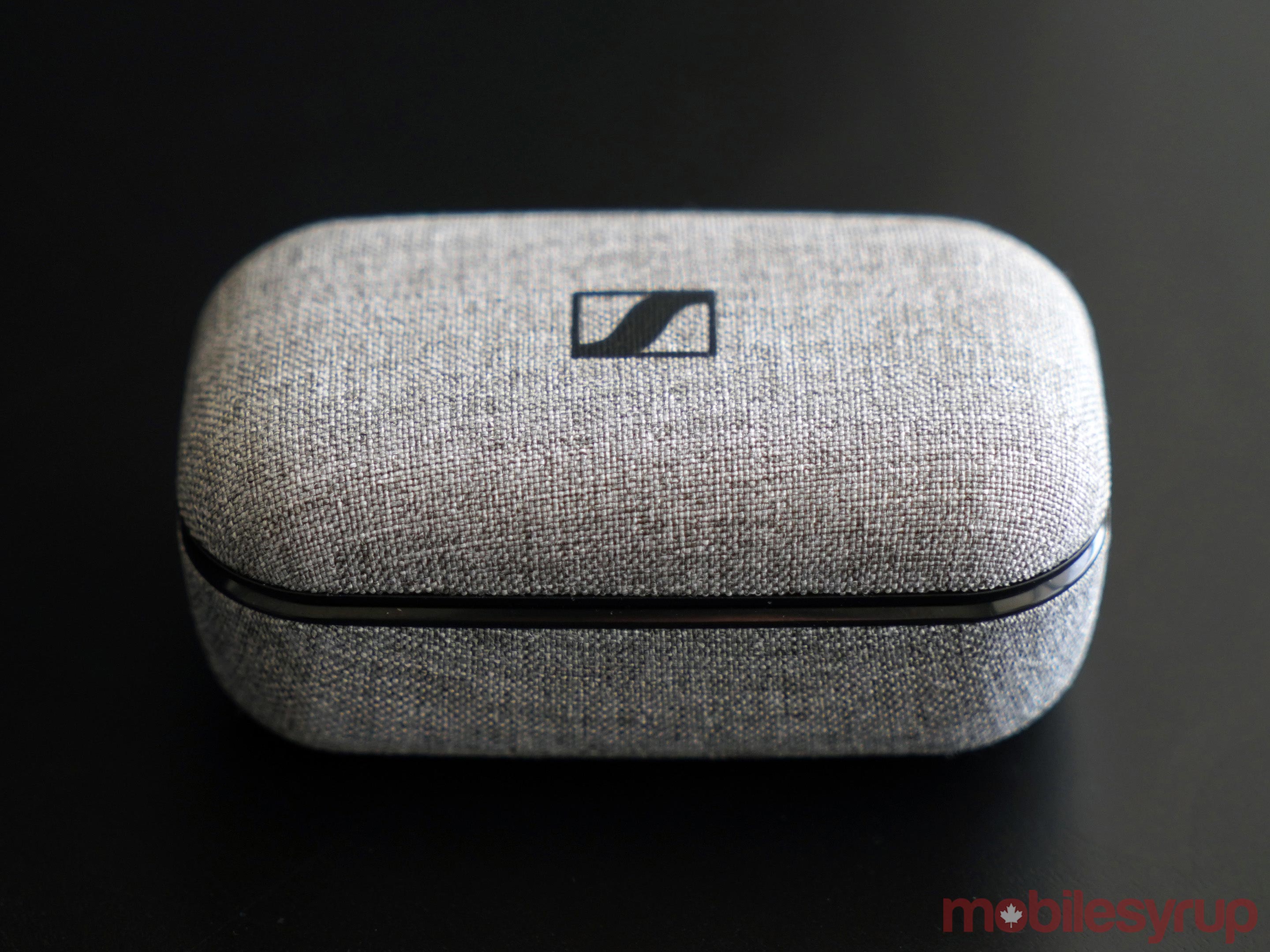 It’s not an understatement for me to say these are the best true wireless earbuds I’ve tested to date. The noise isolation was superb, with comfort in all situations. The overall fidelity was equally impressive, delivering better audio quality than some over-ear headphones I’ve listened to over the years.

What Sennheiser did correctly here was in creating a tonal balance and richer depth that truly shows with everything it plays. Bass has long been the biggest casualty of this still-emerging headphone sub-category, but that was hardly an issue here. It’s consistently good, and better than what I’ve experienced from other competitors, including Jabra’s Elite 65t.

No matter what I played, I never felt like it was a muddied mess of a track. Granted, I wasn’t getting something on par with an audiophile-grade pair of over-ears and a full EQ, but for something this small, the clarity and punch serenading my ears was great.

It also didn’t matter if I was in a quiet room or commuting in noisier areas. Without active noise-cancellation, there was no way to fully block out the outside world, especially in loud situations like flying on a plane. Still, the noise isolation was stellar. Getting a tight fit is imperative with any pair of true wireless earbuds, and these were no exception.

Supporting Bluetooth 5.0 doesn’t hurt, either. Dropouts are common with other models in the category, but I barely noticed any throughout the weeks I tested these out. Other than a couple of minor hiccups, the two sides always stayed connected.

This was also the first time callers told me they couldn’t tell I was using a headset or headphones while I wore true wireless earbuds during hands-free calls. Noisier environments made it a little more obvious, but even there, both of us were audible to each other. I was surprised at this part of the performance package. For a design that doesn’t protrude down below the ear, it’s no small feat for Sennheiser to make calls sound so good.

If I had one thing to nitpick it would be the onboard controls. Single taps and holds were fine, but double and triple taps were never slam dunks. I would try triple tapping only to skip a track instead. I would try to hold but end up registering a single tap. Sennheiser will need to improve this in future iterations. 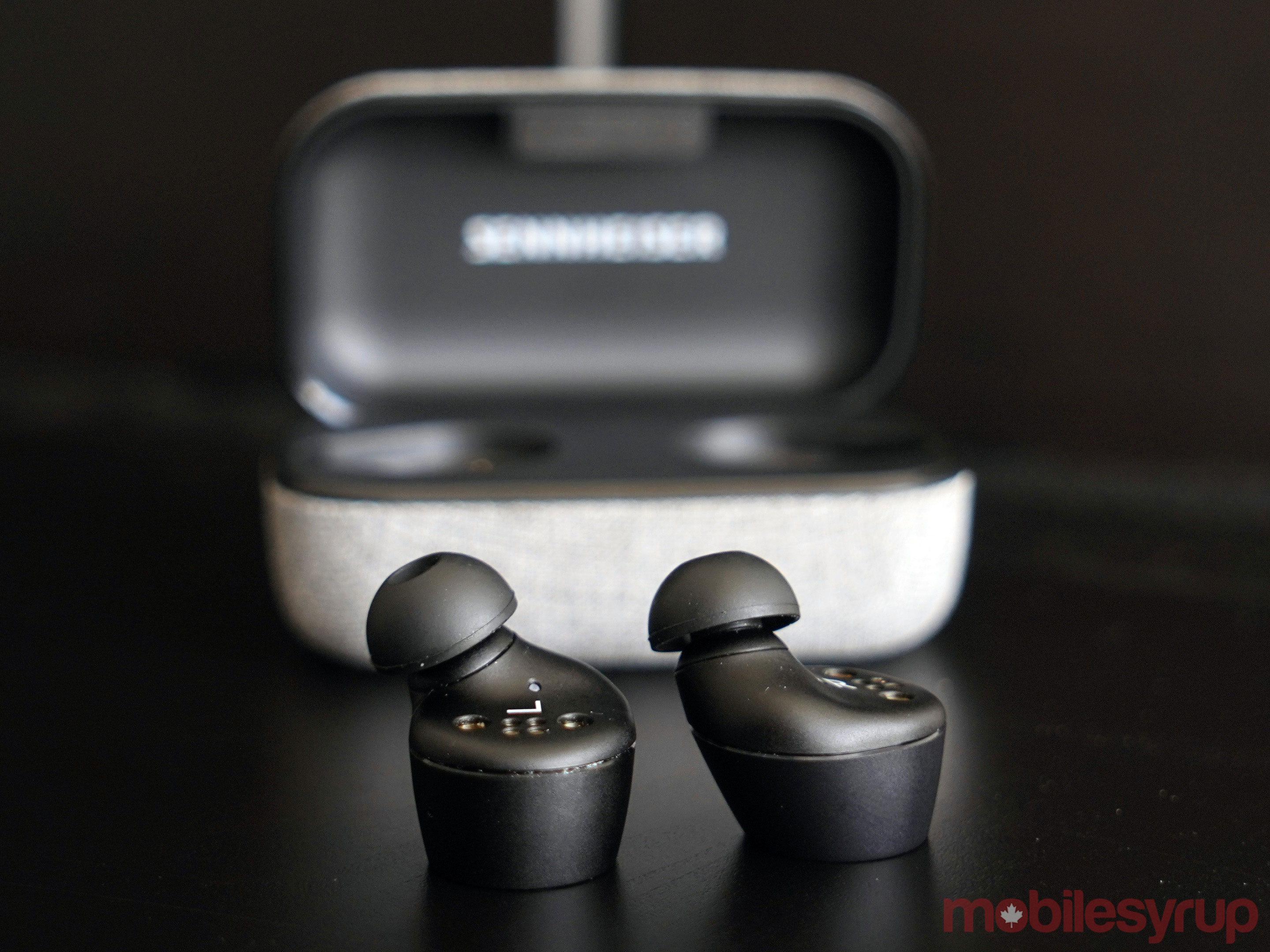 Keeping the juice going for a long time per charge just isn’t going to happen with the Momentum True Wireless. Sennheiser rates them at four hours per charge, but I could only hope to reach that high if I kept volume at the default level and took no phone calls.

As is, with mixed usage and above-average volume, I was hitting about three hours, 10 minutes, give or take. That’s simply not as good as what competitors can offer, and hard to justify for something this expensive.

The case offers two additional charges, which is nice until you have to recharge the whole thing all over again. It took about 90 minutes, on average to go from empty to full, as there is no quick charging capability included.

The best there is

I’ve listened to a lot of true wireless earbuds in just the last 18 months alone. None have been able to match what Sennheiser has done with the Momentum True Wireless, as far as audio quality is concerned. When you’re paying $380, I would think it should be for the best.

You can get something fairly comparable in the Jabra Elite 65t (including the Elite Active 65t version) for as low as $200, so that might be one avenue to go if you care about audio quality and want something a little more rugged and durable.

"When compared to Apple’s AirPods, there simply is no comparison"