Cats are cute, what else do I have to say? [Game of the Week]

The hidden depth to this game surprised me, and I love it 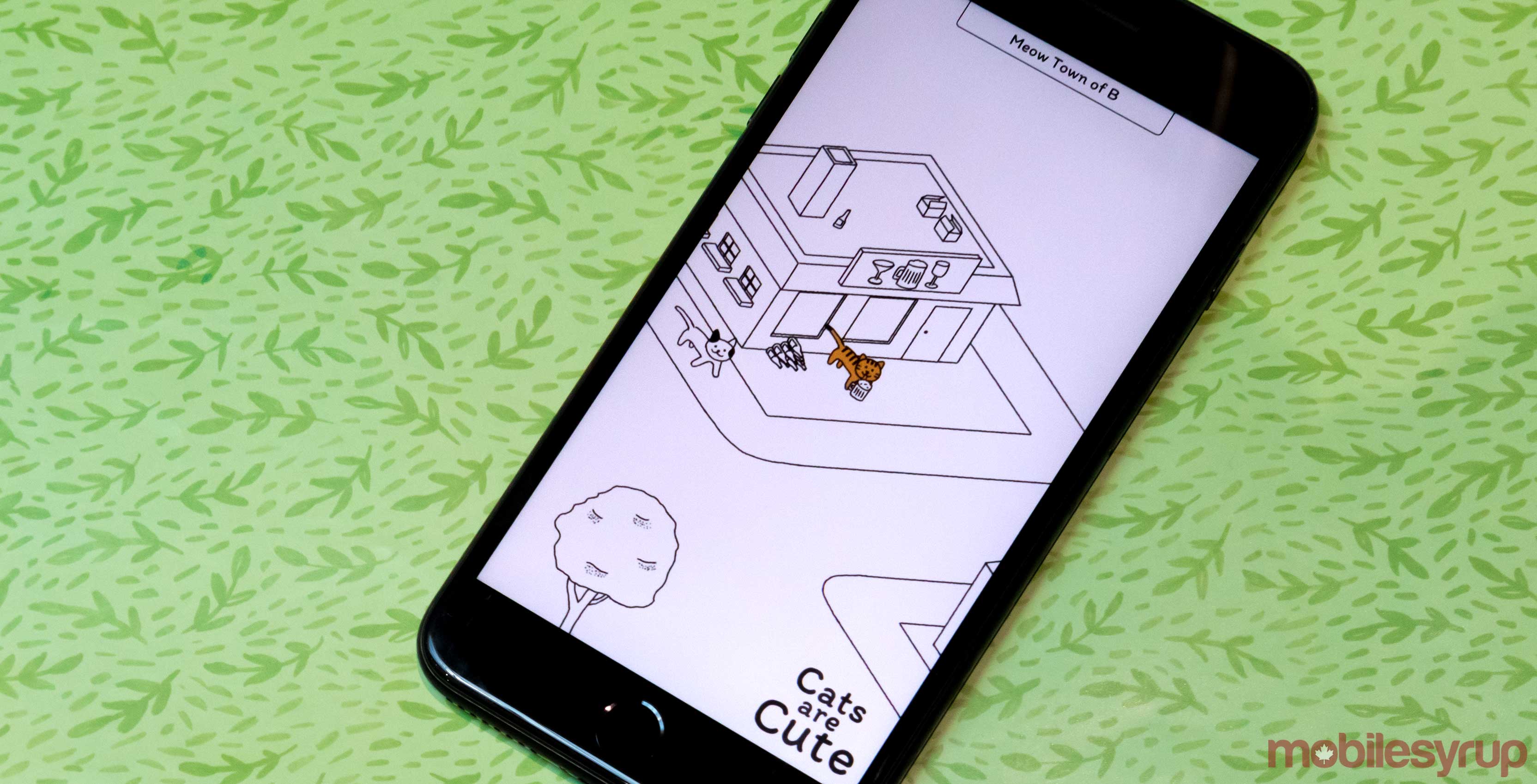 Cats are Cute is a city building/cat caretaking game in the vein of Neko Atsume, from the South Korean-based Kkiruk Studio.

The game isn’t hard by any means since you merely level up by interacting with your cats and tapping the screen. However, it’s this simple premise combined with a charming design and surprising depth that makes Cats are Cute worth your time.

The game begins with a single cat who tasks you with building a town full of its feline friends. There isn’t much direction, but that’s the point. It’s a very passive game where most of the joy comes from upgrading your buildings and buying new cats. 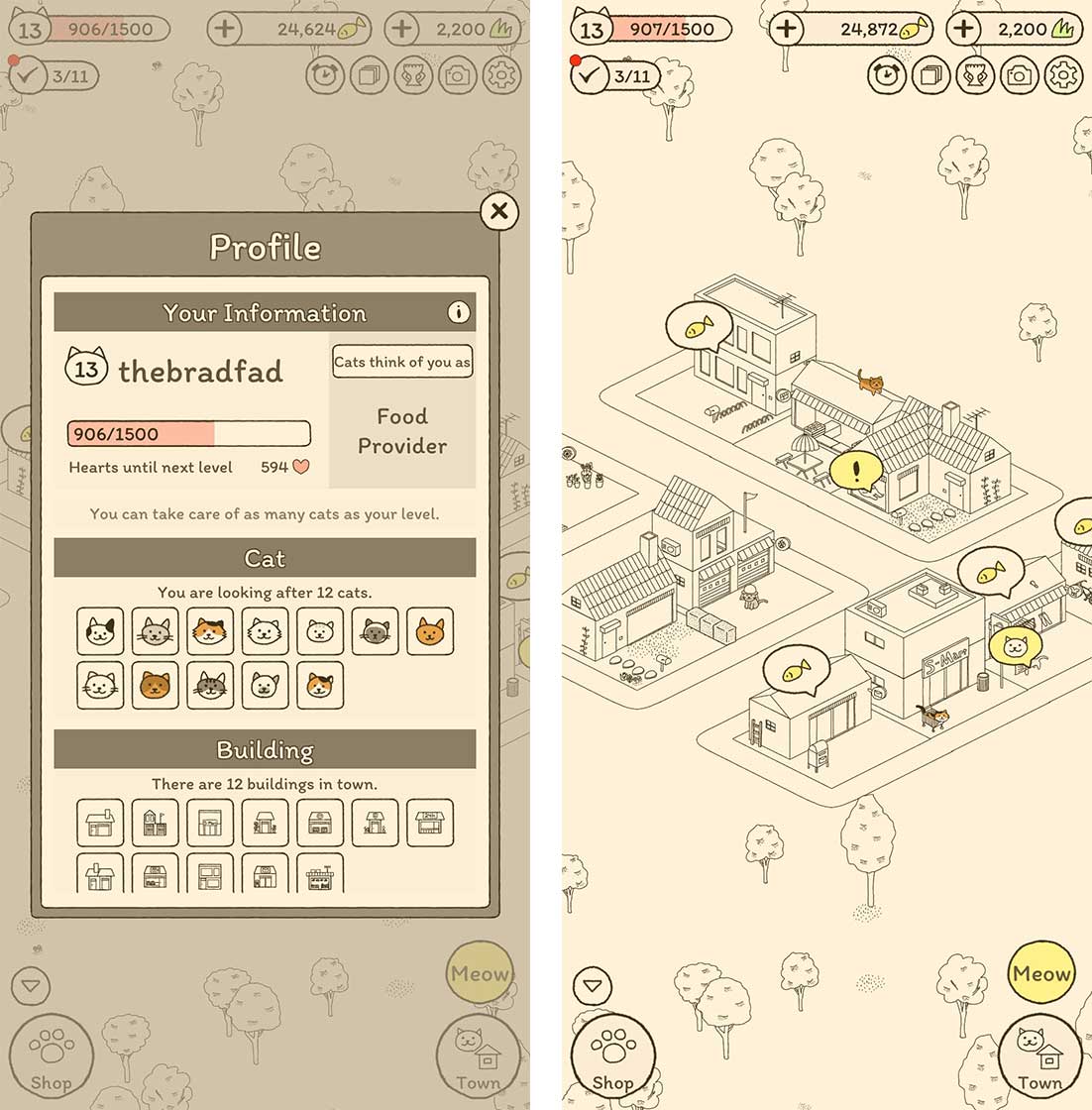 Your level represents how many cats you can have in your town at one time, so higher level players will have more cats. Every time you get a new cat, it also comes with its own building. To level up, you interact with the game. Tapping the screen is equivalent to one ‘Heart’ and your level progress bar tells you how many Hearts you need to reach the next level. This process can be sped up by levelling up your cats so they provide more Hearts per interaction.

You buy cats using two forms of in-game currency,’Fish’ and ‘Catgrass. Fish comes from your buildings and Catgrass from missions and bonuses. There’s a list of 11 missions per day that reset at 4AM and another list of 11 goals that never reset, but rather grow to become more challenging. For example, when you start the game, one goal is to “find five cats.” Once you accomplish that it becomes “find 20 cats” and so on. 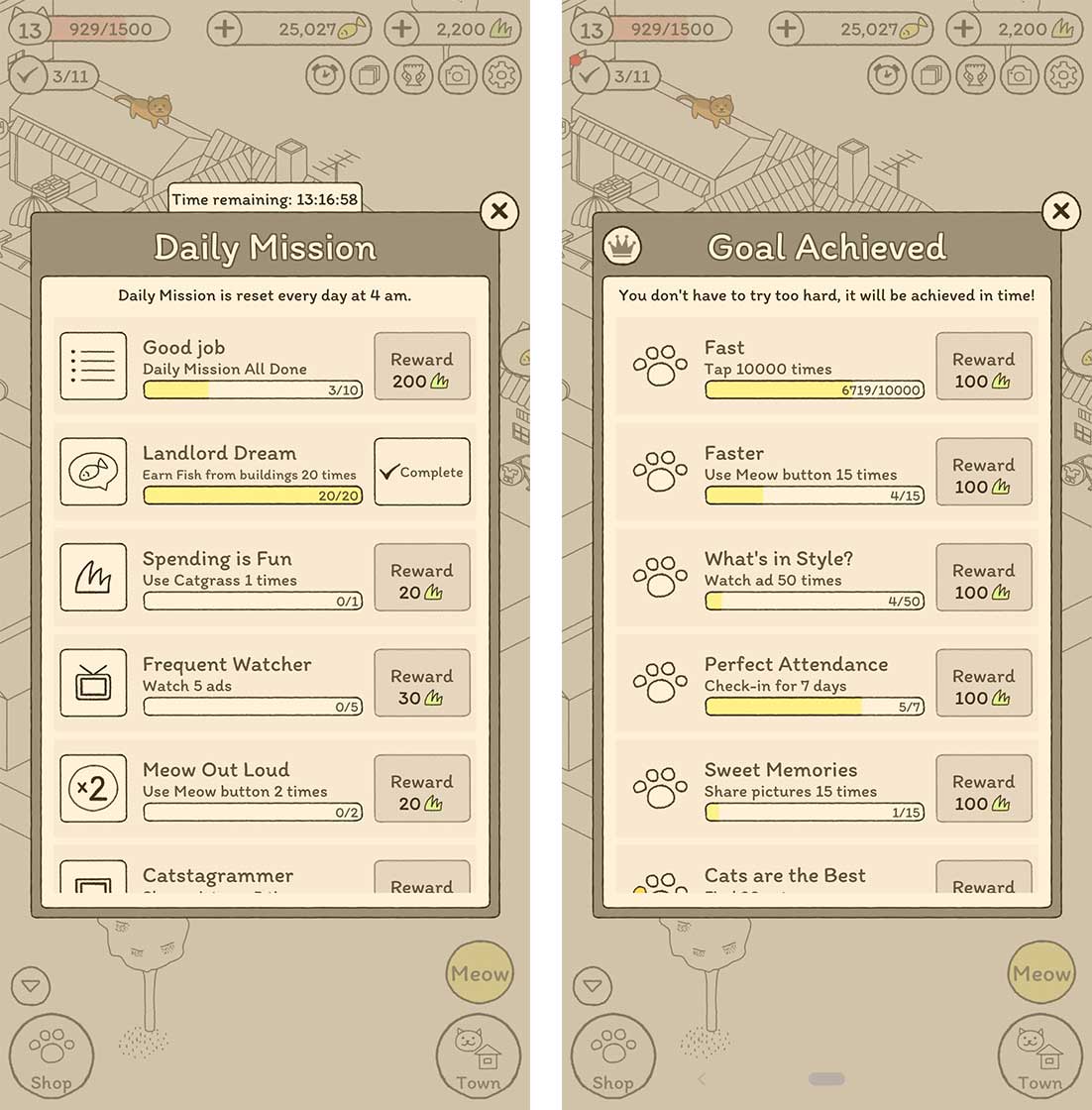 Buildings produce a specific amount of Fish per hour. For example, my Post Office produces 200 Fish an hour and can store a maximum of 400 Fish. So over two hours, that building generates 400 Fish.

There’s a third type of currency called ‘Toys’ and it’s the most difficult currency to gather. Cats come in loot boxes, so if you get a cat from a draw that you already have, the game rewards you with five to 40 toys. 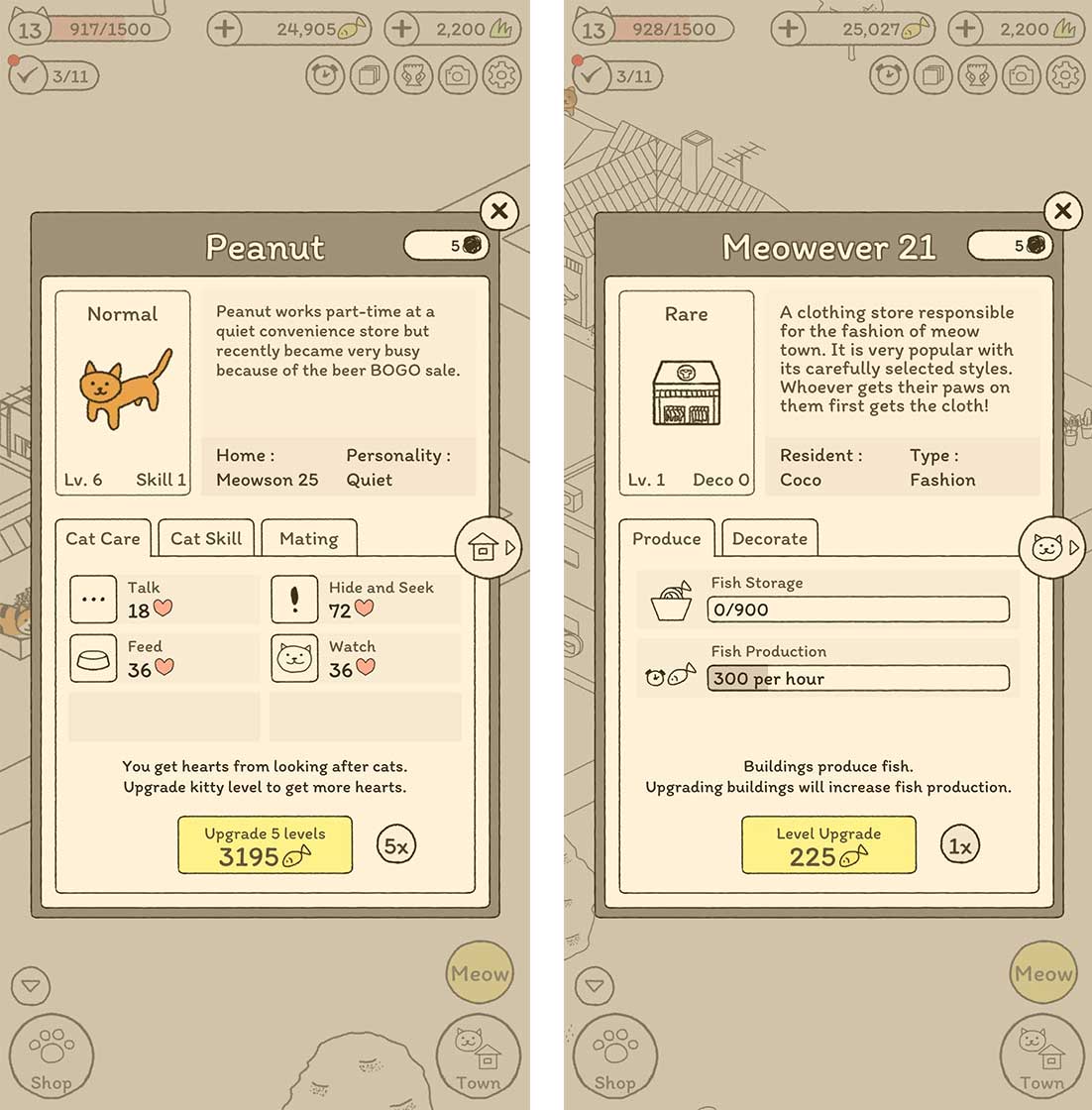 Buildings can be upgraded to produce and store more fish. Plus, you can decorate them, but the decorations cost a combination of Toys and Fish.

As I mentioned, your cats are upgradable which rewards players with more Hearts when they interact with them. Beyond that, you can unlock new skills for your cat that provides them with extra animations. The cat’s stat card also has a ‘Mating’ section, however that feature isn’t available yet.

Periodically the cats appear with yellow speech bubbles over their heads. This means that you can interact with them. There are four different interactions: ‘hide and seek,’ ‘feed,’ ‘talk’ and ‘watch.’ 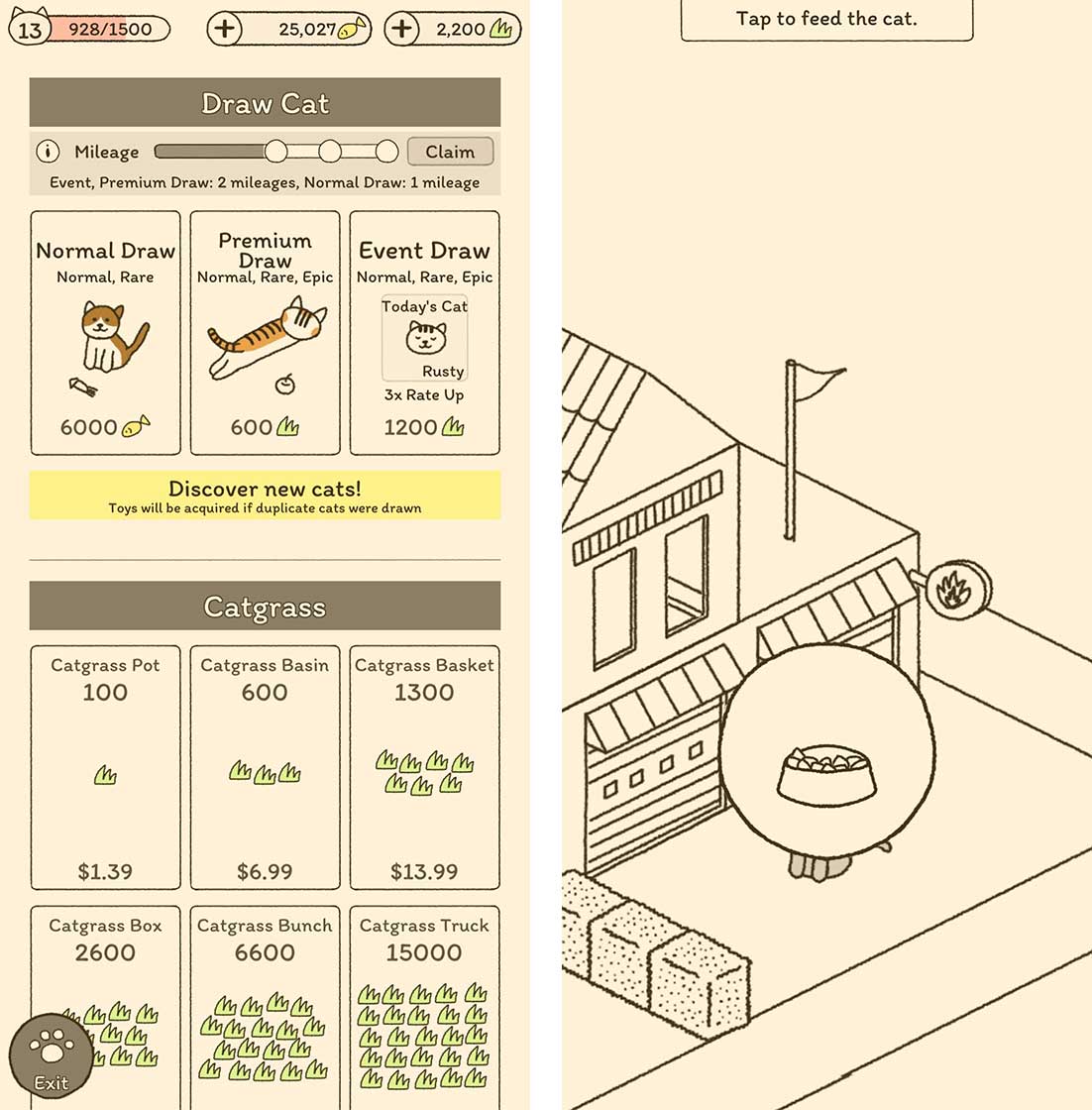 There are also some other animals you can find from accomplishing hidden tasks. I don’t want to spoil them, but if you tap on the lake in the bottom left of the map 200 times you get a feathery friend.

That’s about all there is for gameplay, but on the settings side of things, users can save their town to the cloud, and there’s a sepia filter called ‘Colour Mode’ that makes the game easier to play in the dark.

Cats are Cute offers microtransactions, yet in my time with the game I haven’t felt the need to buy anything.

Overall I’d have to give Cats are Cute an outstanding 10 out of 10 meows.

You can download Cats are cute for free on both iOS and Android.