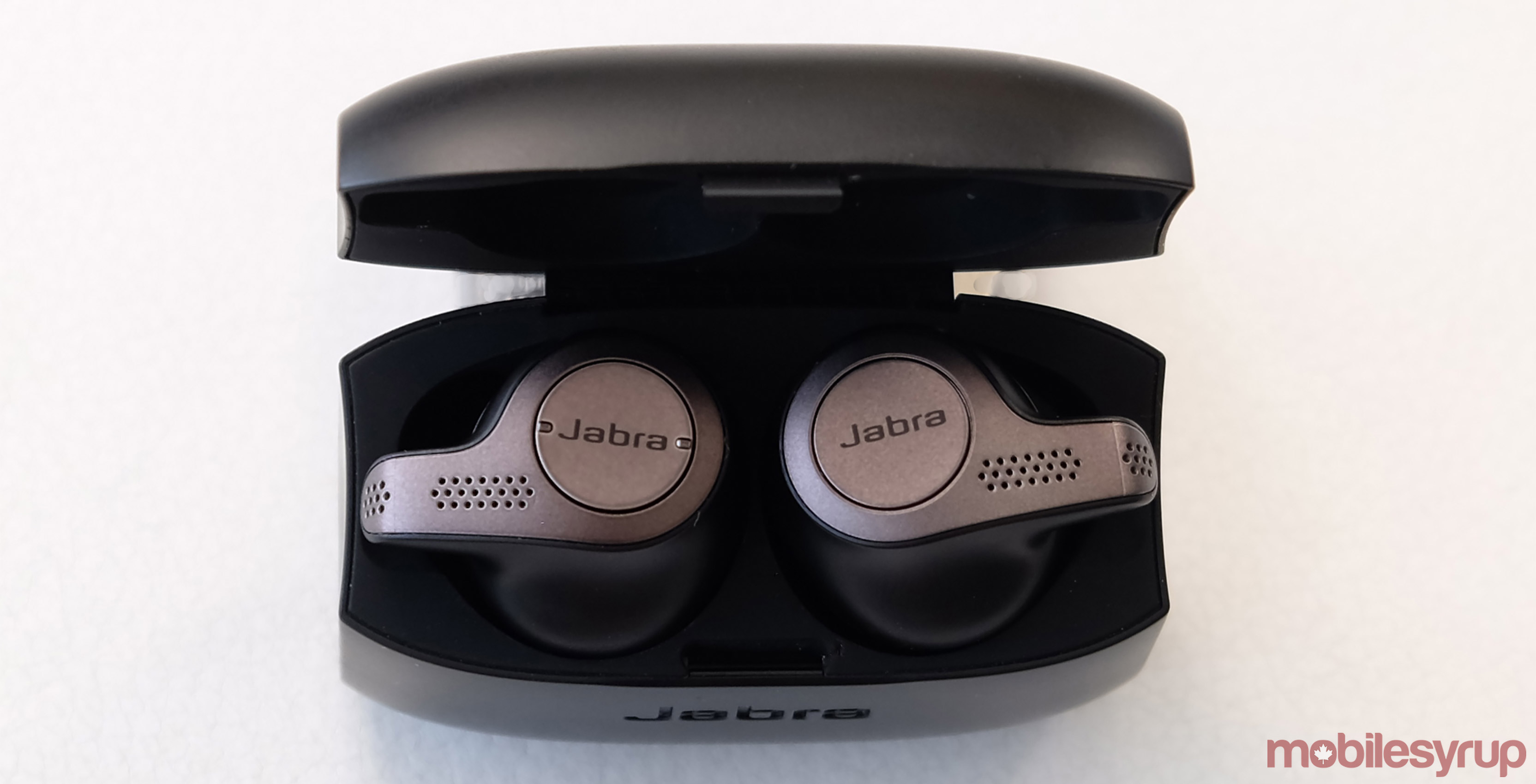 Apple’s AirPods have been the standard bearer for true wireless earbuds, but that doesn’t make them the best available, a point proven by both the Jabra Elite 65t and Elite Active 65t.

This isn’t the company’s first kick at the can. Its Elite Sport ultimately came in two variants, the second of which was available in a different colour and featured improved battery life. These latest two models go beyond that to improve performance in the most important aspects.

As much as Jabra has tried to make its products conducive to active users, it has also pursued a level of audio fidelity that would set the tone for others. These two models present a valiant effort in that regard, making them worth serious consideration. 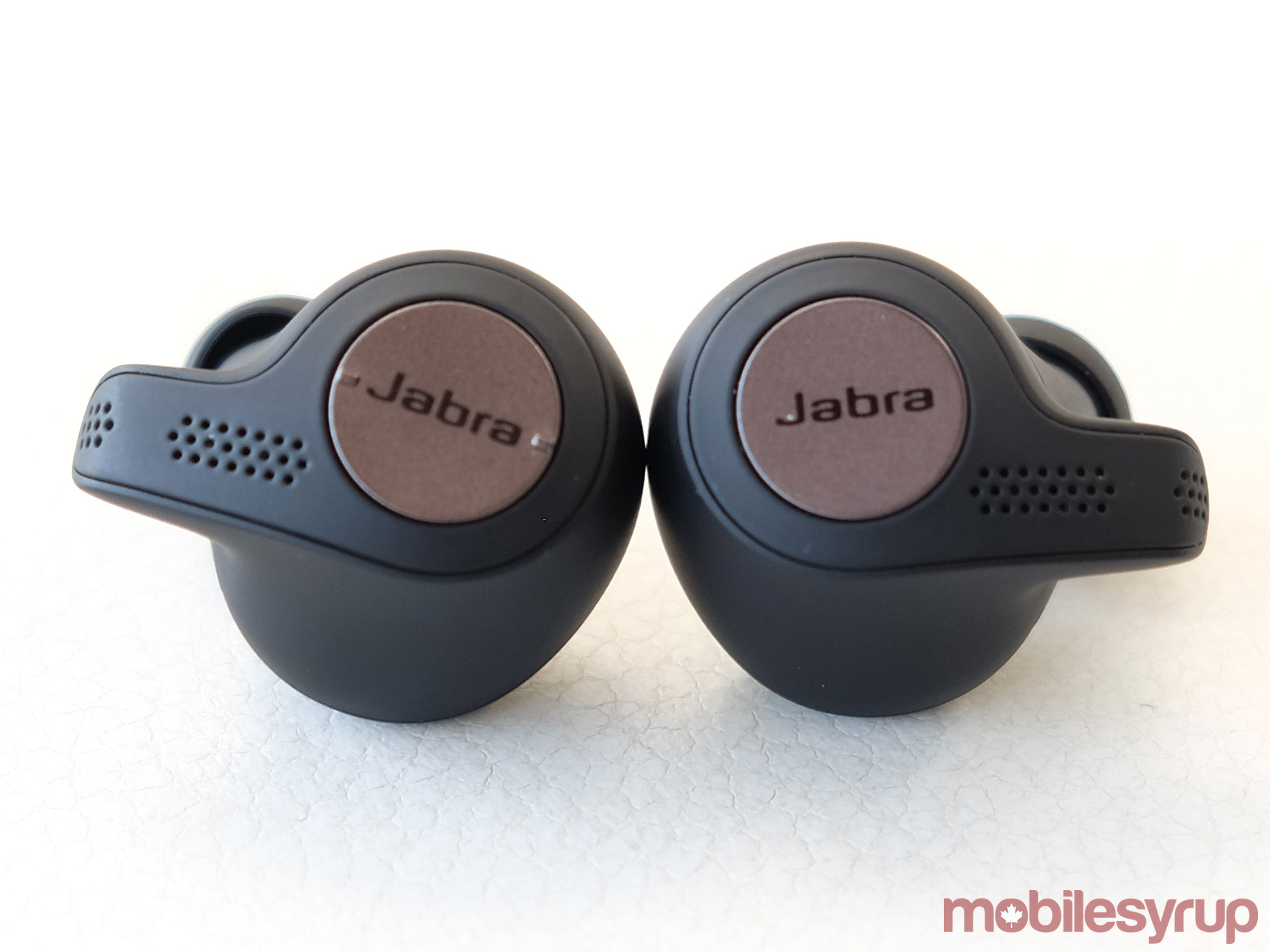 The base design for both is essentially the same, but subtle differences do make them unique from one another. The Active 65t has a more rubberized body for increased friction to keep them in place when sweating. That also means a slightly upgraded rating of IP56 compared to the regular model’s IP55. In practical terms, it means the Active is more resistant to sweat, which can be important later on.

That’s actually less than what the Elite Sport could do. The Elite Sport has an IP67 rating that makes that pair water resistant, on top of the sweat resistance. Another caveat is both the Active Elite 65t and regular Elite 65t have a two-year warranty, compared to last year’s three-year warranty.

The Active also has a built-in accelerometer, but at the time of this review, it doesn’t do much. And finally, its case has quick charging, letting you get 90 minutes of use after only 15 minutes of charging. The Active’s case is slightly more matte as well, but that’s little more than an aesthetic tweak. 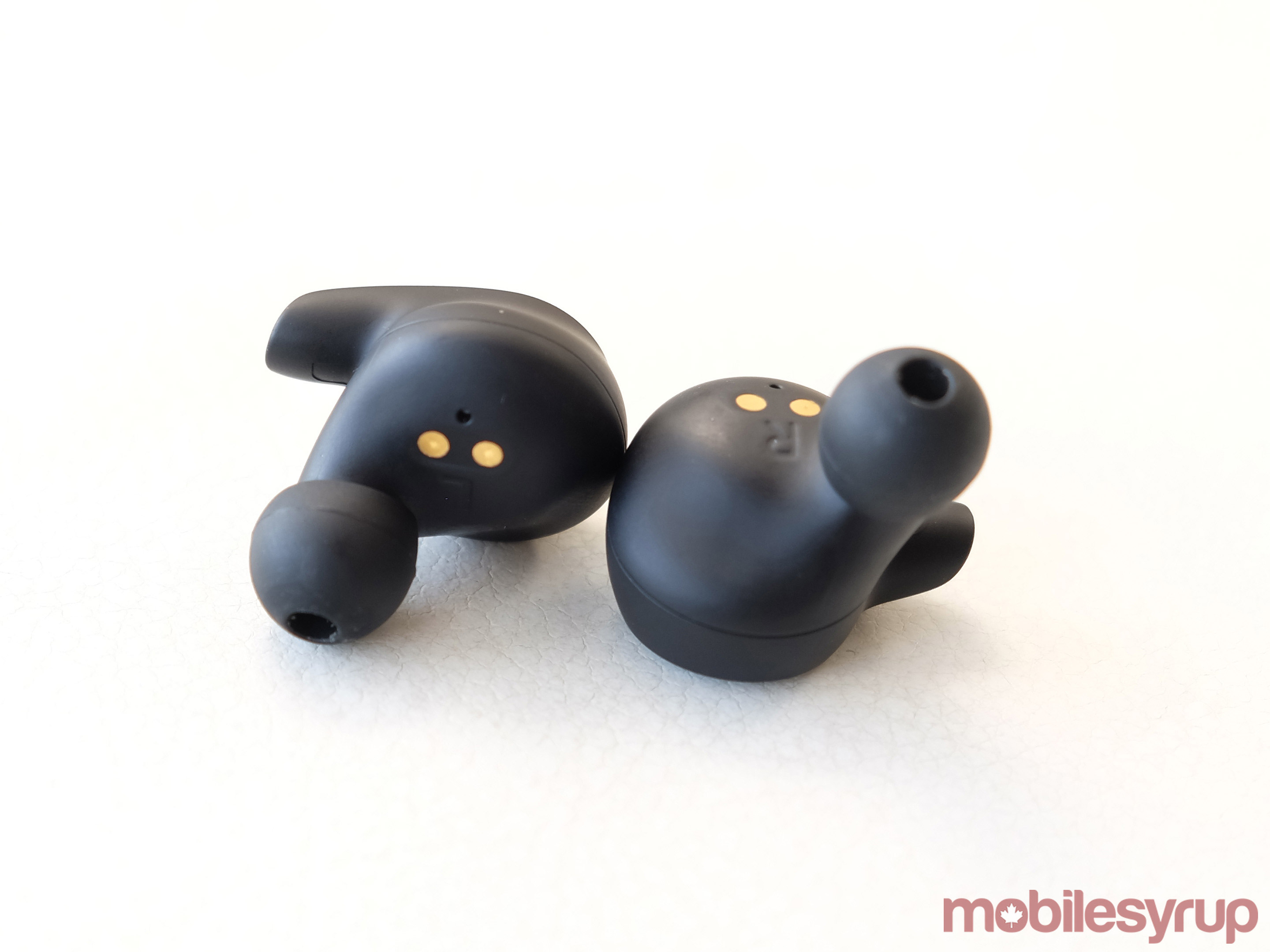 Beyond that, there is little to differentiate the two. They have the same accessories and come in almost identical packaging. There are only three sets of gels for each unit, in stark contrast to the array of gels, tips and wings on the Elite Sport.

Both also fit the same way, providing a level of passive noise isolation that wasn’t as easy to achieve with the Elite Sport. It took Jabra a few attempts, but this is easily the best overall design the company has produced for a true wireless set of earbuds.

One thing to note, however, is that neither model functions with Jabra’s Sport Life app, which was an activity tracker. Instead, it’s the Sound+ app that manages their additional functions, including an equalizer and modest activity tracking for walking and running. Firmware updates also route through the app, and you would need to register the earbuds on the app to qualify for the warranty. 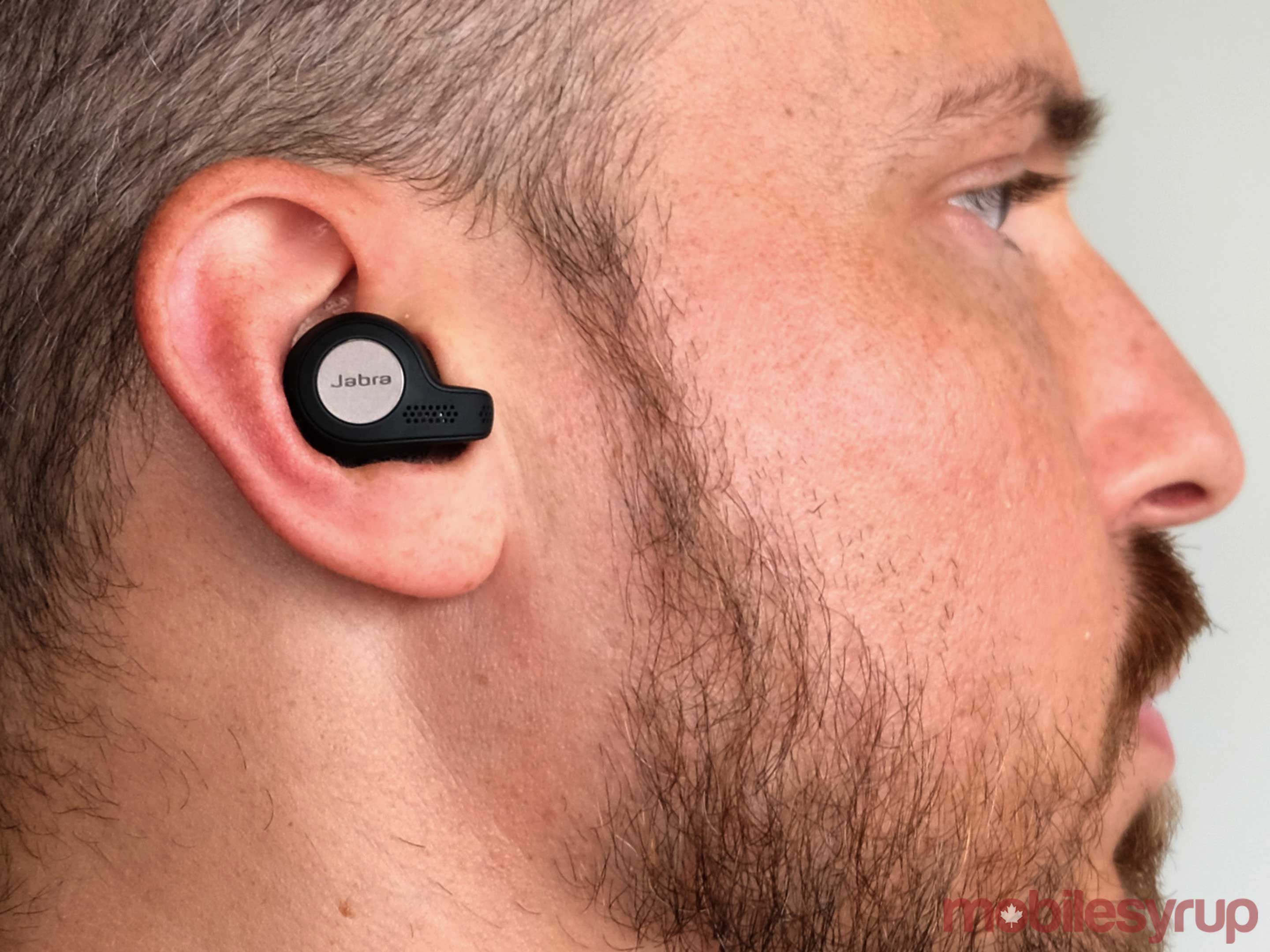 Pairing via Bluetooth was easy. Either unit will go into pairing mode right out of the box. Thereafter, every time you take them out of their case, they immediately connect. The AirPods are quicker to pair with an iPhone initially, but are not that different when it comes to maintaining the connection, otherwise. Updating the firmware through the app is simple to do and no longer requires the tedious process of downloading files to install on a computer.

When it comes to fit, Jabra got it right. They are bulky, but the contours and angling made these fit so well that I had excellent noise isolation. Since this could be problematic when out on the street, there is HearThrough mode available to toggle on the app, including a slider to adjust how porous the mode should be.

That allows ambient noise to filter through, which can also be useful if you need to talk to someone without taking them off. I found the simpler way to turn it on or off was to double-press the button on the face of the right earbud whenever I wasn’t listening to music or on a call.

Overall controls are limited, but they’re available. The button on the right side can play or pause music or answer and end a call with a single press. A double-press rejects an incoming call or, as noted, turns HearThrough on or off.

Holding it down for a second or two will trigger Siri or Google Assistant, depending on the device you’re paired with. In lieu of those, you could opt to use Amazon Alexa instead, which I’ll touch on later.

The left side has two tiny buttons for volume up or down. Holding either one for two seconds skips or repeats a track. Pressing either one when nothing is playing announces battery status. 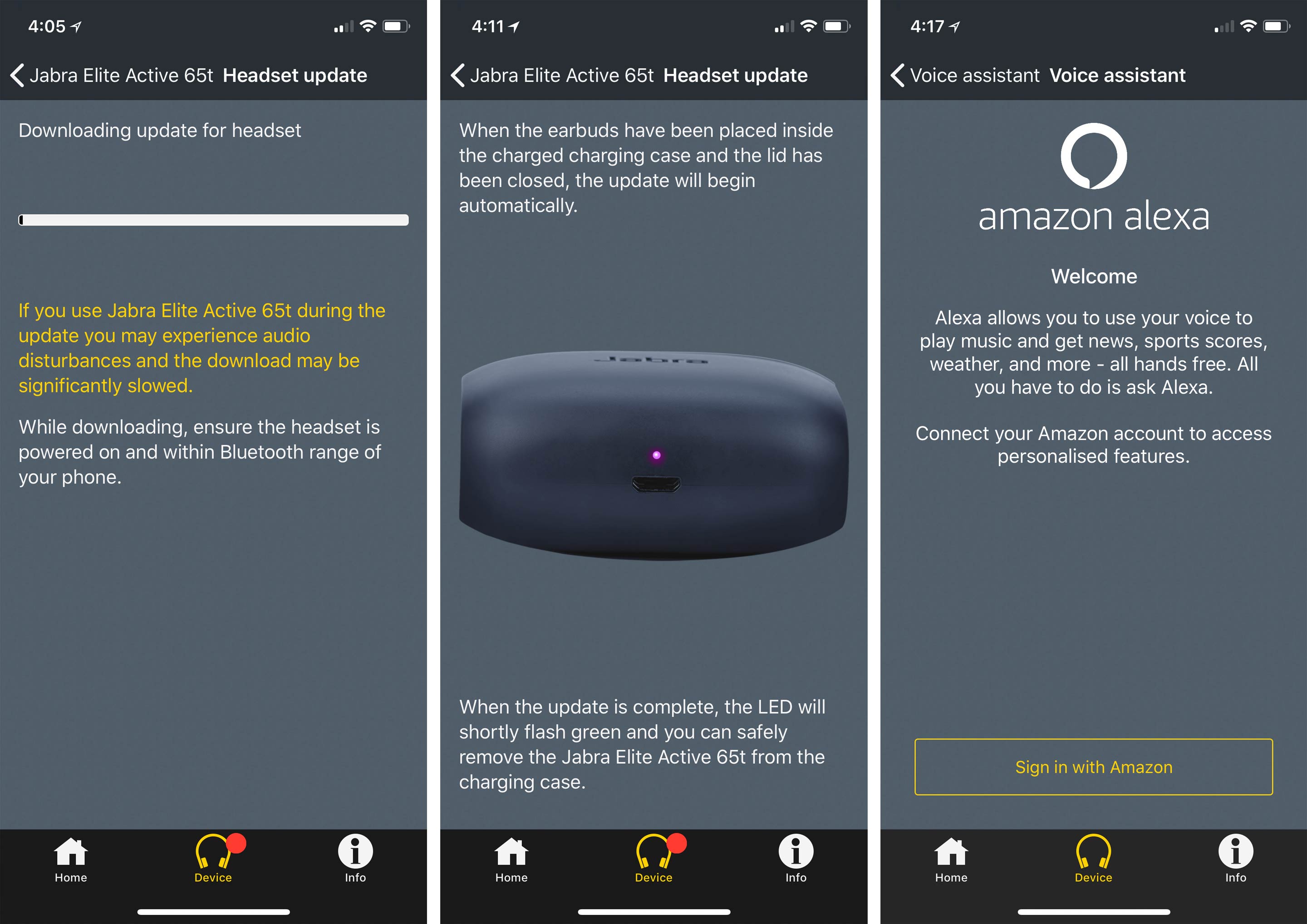 Since Amazon announced its ‘On the Go’ integration earlier this year, there have been a smattering of vendors supporting it. Through the Sound+ app’s voice section under settings, there’s an option to disable Siri or Google Assistant and go with Alexa instead. All I needed to do to get it done was sign in with my account.

Despite there being two microphones on each side, it wouldn’t respond to the standard “Alexa” prompt. It needed me to hold the button on the right side to activate. From there, I could ask it for basic things, but was limited in key respects.

For example, the only music I could request came from Amazon Music. Spotify wouldn’t work at all, which was annoying, considering the functionality works so well on Alexa-enabled speakers. I also couldn’t make phone calls, taking away a feature I otherwise take for granted when using Siri or Google Assistant. For those reasons, I opted to go back to those voice assistants and silence Alexa. 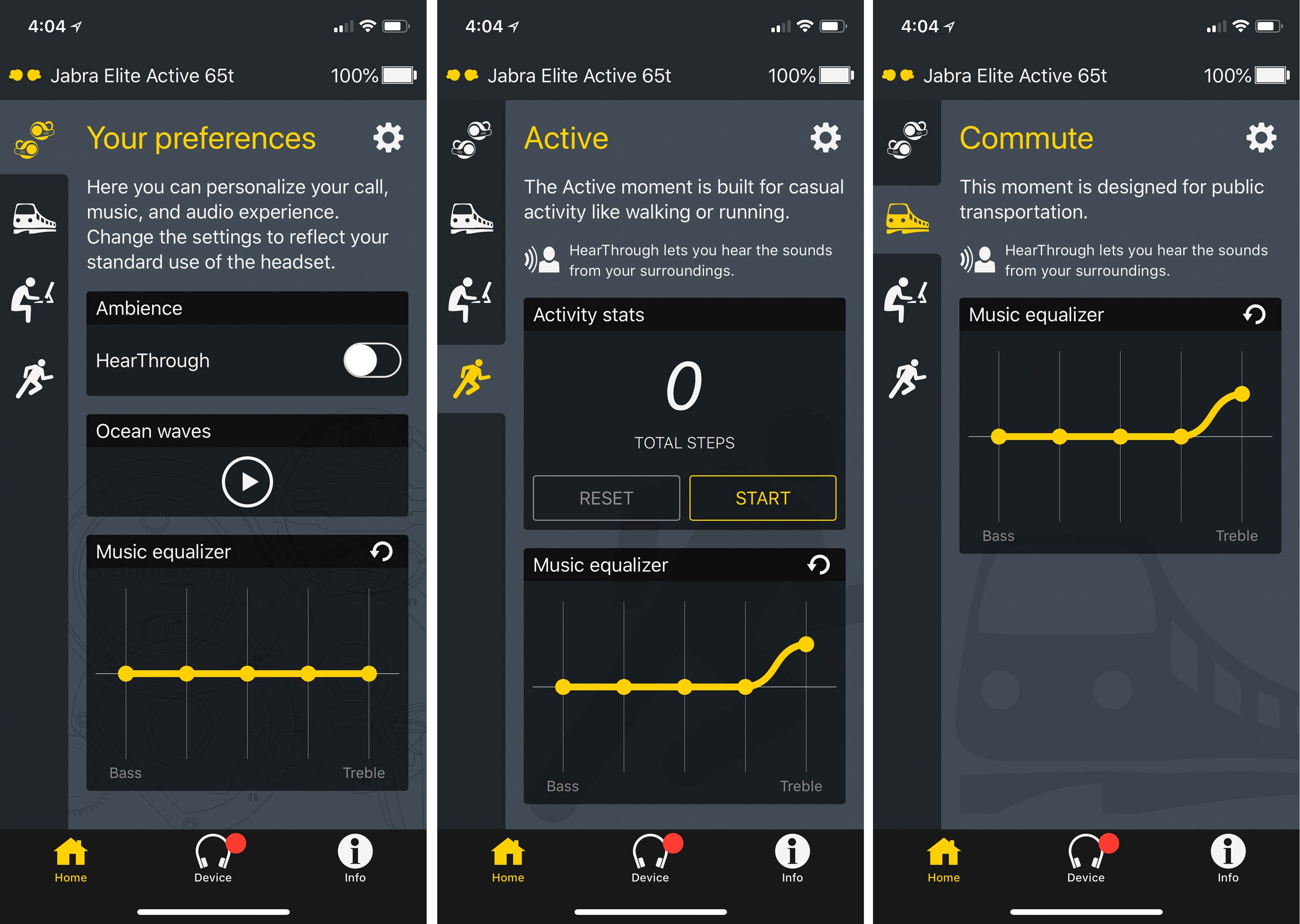 The tighter fit, in and of itself, produced better audio than the Elite Sport, and far better than anything the AirPods are capable of. I recognize some users might like the lightweight and open design of Apple’s true wireless earbuds, but they are terrible at noise isolation, and are not made for sweating on a run or at the gym.

Moreover, a better seal helps bring out more bass, something Jabra has tried to deal with going back to its semi-wireless Sport line. The highs and mids have always been present, but getting more bass required finding the right fit with the right gel or foam tip. That Jabra could pull this off in spite of drastically reducing the tip options is a credit to the design.

Everything I listened to, not just music, but also podcasts, movies, shows, online videos and more, came through nicely. There was a clarity to both pairs that I could really appreciate.

I found no discernible audio difference between the Active and regular 65t. They both sounded the same to me. The equalizer on the app is very basic, so don’t expect anything too intricate. But if you want something that can boost a part of the spectrum to your liking, it’s good enough to do that for you.

The fit was also more comfortable over longer periods, negating the need for me to pull away and scratch my itchy ears. They held up well to sweat and I rarely ever had to adjust the fit whenever I wore them.

Call quality was also solid. Conversations were clear, and I never had anyone complain to me about how I sounded. Given Jabra’s pedigree for hearing aids and other call centre products, I wasn’t surprised. But again, the tighter fit made it so much easier to hear the other person, even when I allowed some ambient noise in. The only thing was how weird I looked talking in public while wearing something that wasn’t immediately obvious.

Not much has changed on the battery front. Both of these units are rated to go up to five hours per charge, which is only 30 minutes more than the last model. The charging case, though only slightly bigger than the AirPods case, only manages two additional charges. That’s low compared to Apple’s, which can more than double that total.

Still, at least the quick charging of the Active 65t got me up and running fast when I needed them for a workout. The regular model wasn’t as quick, so I made sure to try keeping the case topped up. An extra two charges in the case would’ve been great, but I recognize that the size and components inside each earbud contribute to the more limited battery prowess involved here.

Either way, the five-hour claim is only at the default volume, which is about 50 per cent. I consistently went higher, and thus, usually didn’t go above 3.5 hours.

At $219.99, the regular Elite 65t is the same as a pair of AirPods, though a newer pair is reportedly in the works. The better audio quality alone makes them a better deal. The Active 65t are coming to Canada soon, and given they are $20 more in the United States, you can bet there will be at least a $30 premium on those.

Unless you plan to sweat a lot or have faith in the accelerometer becoming truly useful, you should be fine with the regular model. You do need to manage the battery to some degree, but the fit and audio performance make them among the best true wireless earbuds available now.