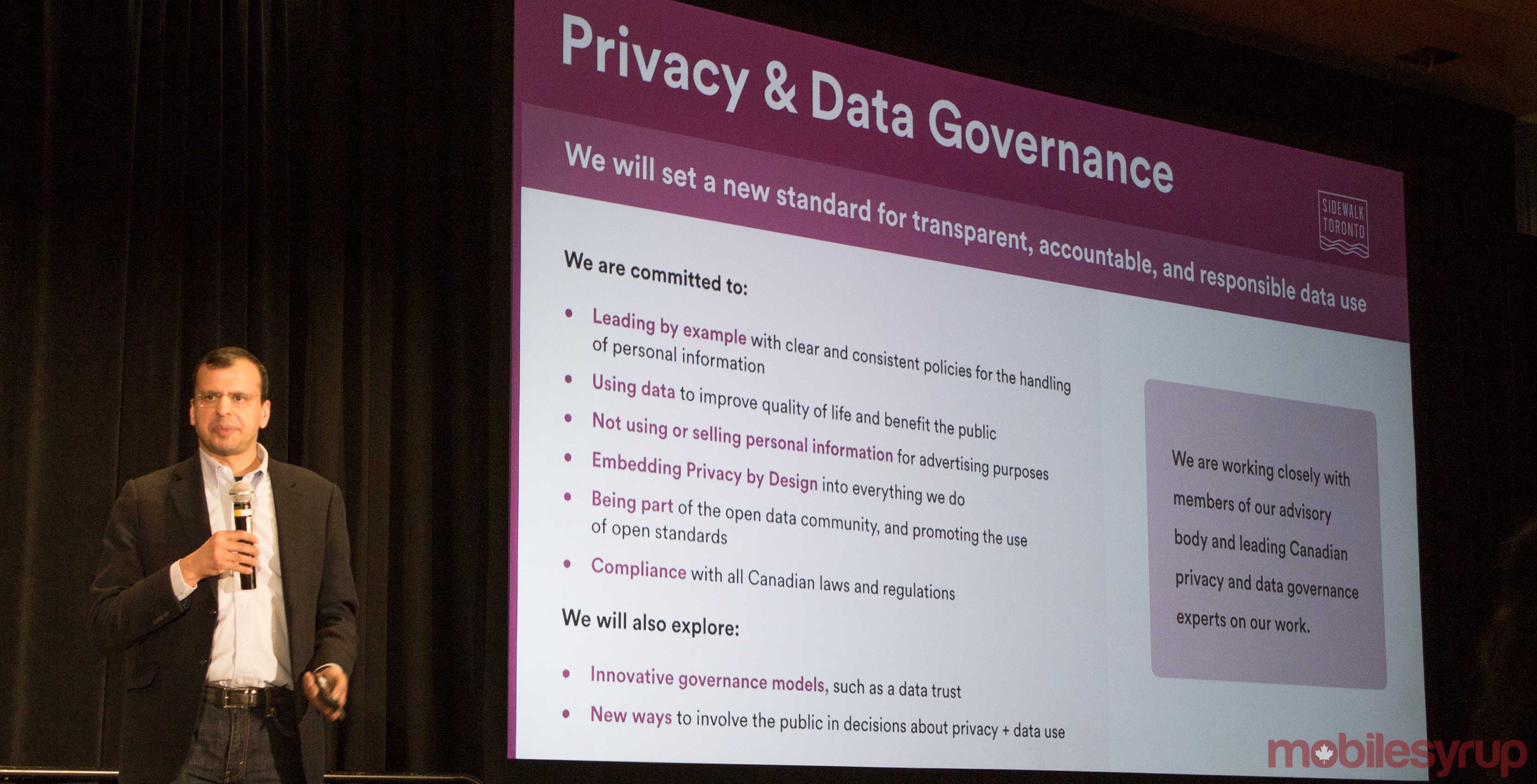 Sidewalk Labs is currently in the process of negotiating provisions to guarantee the privacy and respectful use of the data that will eventually flow through the Sidewalk Toronto development.

“What matters in a city is when people feel comfortable, people feel respected, people feel a sense of ownership in that place,” said Aggarwala. “And they can’t do that if they feel they’re being monitored for the wrong reasons or for any reasons.”

“What matters in a city is when people feel comfortable…”

During the presentation — itself meant to bring attendees up-to-date on the latest developments since Sidewalk Toronto held its open hall forum earlier this year — Aggarwala stated that Sidewalk Labs is not “the kind of firm that’s going to get a lot of data and figure out what to do with it [later].”

According to Aggarwala, the goal is to establish data provisions that speak to Canadian values and Canadian standards and requirements.

In order to accomplish this feat, Aggarwala said that the company is utilizing the Canadian principle of ‘privacy by design.’

Privacy by design was developed and pioneered by Ann Cavoukian, the former information and privacy commissioner of Ontario.

“You start with a problem and then you figure out what is the minimum amount of information that we need to affect this problem.”

Cavoukian is also working with Sidewalk Labs to help the company establish its Canadian privacy policies.

The subject of data storage was pressed during the presentation’s Q-and-A segment.

Asked where precisely Sidewalk Toronto plans on storing all of the data that will eventually flow through the project, the company’s general counsel and head of legal Alyssa Harvey Dawson said that the company is still working with governmental and other actors “to be innovators in terms of data governance,” at the first Q-and-A.

During the second of the Q-and-A presentations, Dawson also addressed a question about privacy by design.

Representatives from Waterfront Toronto — a collaborative not-for-profit created by the Government of Canada, the Province of Ontario and the City of Toronto — were also present.

Waterfront Toronto’s vice president of innovation, sustainability and prosperity Kristina Verners stated that the “data residency question is something we’re actively working with Sidewalk on…to ensure that the sensitives are loud and clear and the legislation and regulatory framework is completely adhered to.”

Verners later told MobileSyrup that talks between Sidewalk Toronto and involved groups and organizations are ongoing, but that the Sidewalk Toronto recognizes that it’s important to all individual groups receive the information that is necessary for their operations.

Verners also told MobileSyrup that the goal is to get privacy and data management codified into contracts established between Sidewalk Labs, Waterfront Toronto and the other involved groups.

In a separate conversation with MobileSyrup, Sidewalk Labs’ privacy program director Lauren Reid said that data storage will be determined by what makes sense.

“So there are some reasons why we may want to store data in Canada, there are also reason why it may be — we may sacrifice some values,” said Reid. “For example, in the cloud there’s better privacy and security than there are in a local data centre here in Canada. You just got bigger scale and you got bigger computing power.”

Reid also stated that in a large project like Sidewalk Toronto, a “blanket statement” about privacy would be “premature” to make.

Talking data privacy and governance with Alyssa and Lauren of Sidewalk at the @SidewalkToronto public meeting We’re committed to being part of the open data community and we’re exploring innovative governance models such as a data trust. pic.twitter.com/V1uiJTjkj6

Sidewalk Labs serves as the urban planning and development arm of Google-parent Alphabet Inc. While the company is owned by Alphabet, it operates relatively autonomously.

At the RBC Disruptors’ speaker series earlier this year, Sidewalk Labs CEO Dan Doctoroff emphasized that the company would not use acquired data for “commercial purposes.”

“Data will be used to improve quality of life,” said Doctoroff, at the January 17th, 2018 event.

Sidewalk Toronto’s Master Innovation and Development Plan is currently in development and is expected to be unveiled at the end of 2018 or in early 2019.