Sometimes, a company’s confidence shows through its design philosophy. LG has tried to build an elegant phone for years, and with real beauty in the V30, its camera performance makes for an interesting upstart.

There is some recent heritage here. LG took a huge step forward in 2015 with the G4, a phone capable of shooting great images, especially in Manual mode. The way forward hasn’t been a smooth ride since, but the V30 at least tries to rein in the excesses and highlight the successes.

The feature-rich camera setup requires patience and tutelage, though once a good comfort zone sets in, the results are among the best of any phone currently available.

LG’s evolutionary approach is fairly obvious on paper. The V30 continues the tradition of offering two rear lenses, a standard one and wide-angle one that captures a scene at 125-degrees. The standard camera’s 16-megapixel image sensor is helped by an f/1.6 aperture, whereas the wide-angle lens uses a 13-megapixel sensor with an f/1.9 aperture.

That the wide-angle lens doesn’t have the optical image stabilization (OIS) the standard one has would seem like an omission, but when shooting that wide, it becomes almost redundant.

Having such a wide angle lens at your disposal makes certain scenes a lot easier to capture — especially architecture, vistas and large groups. Almost everything offered in the V30’s camera arsenal is equally accessible through the second lens, both for photos and video.

It would seem easy to simply shoot in Auto and switch between the lenses at will, except that would mean missing out on a deep feature set. The openness with which the manual mode works, along with some of the other elements, lends plenty of opportunity for creativity and composition.

I should note that the V30’s thinner and slimmer build does help when shooting in hand or propping it on a selfie stick with a tripod. The G6 had a similar feel, whereas the V20 was clunkier. 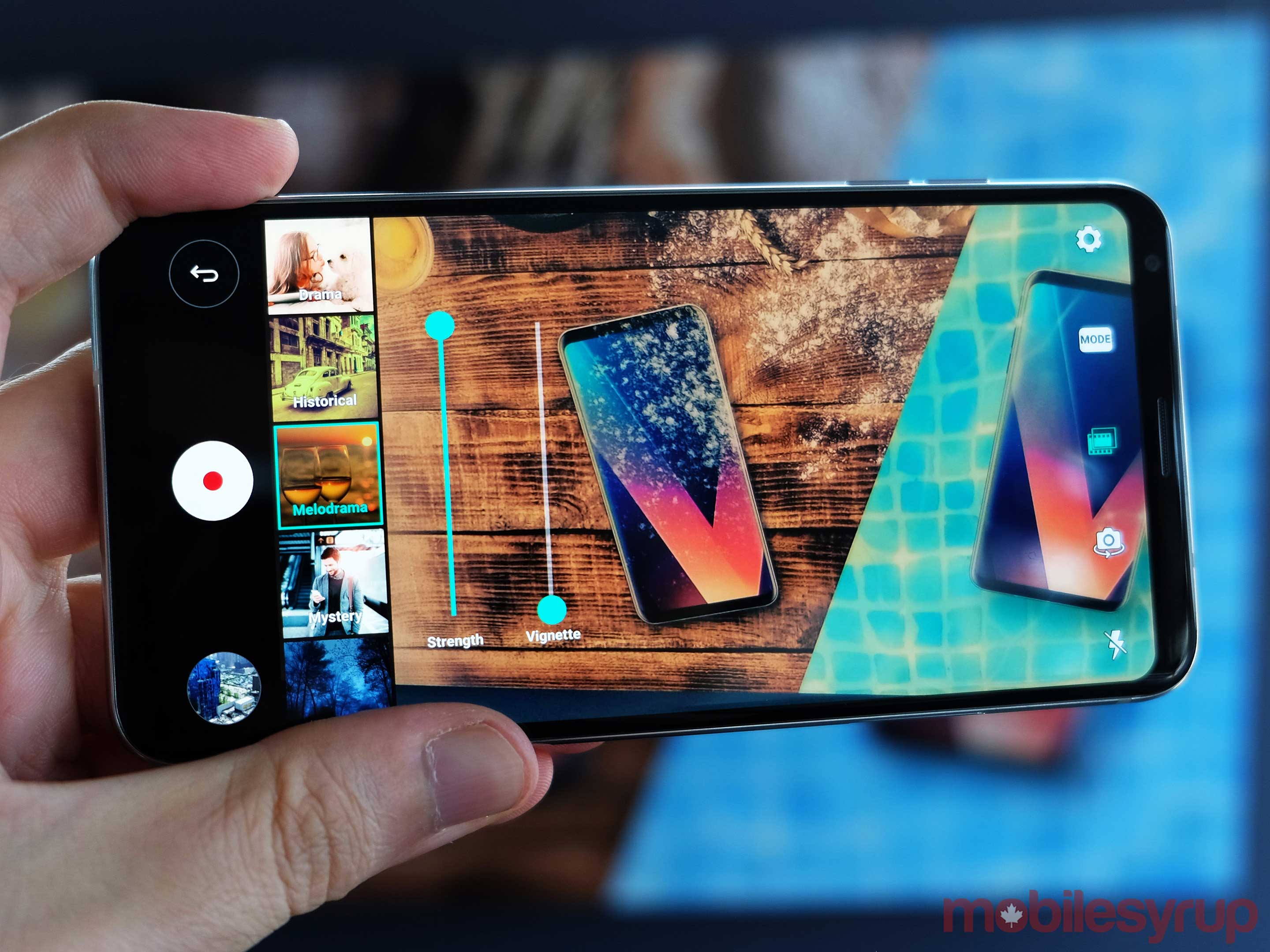 When looking at the library of camera options and features LG provides, it is inherently obvious the company wants to help users learn to take better photos. It’s a good strategy, but only if users engage with the tools designed to graduate them along.

Naturally, it’s not gamified or built as a graduated system, so trial-and-error ensues. The reward for utilizing these tools is the image quality and composition they can achieve. LG does walk a fine line here though. Too many shooting modes leads perilously close to shameless gimmickry, so the saving grace with this phone is that the extras don’t necessarily feel extraneous.

Snap shot previews a captured image immediately without leaving the camera, so that you can reframe or improve your shot. Guide shot allows for an image to act as a guide for the composition of a shot you’re about to take. Grid shot can put together up to four images in a collage. Match shot can put together two shots, either in succession or using a previous image as the first shot.

Those are on top of the modes for food, panorama, 360 panorama, popout and manual control. Unlike other vendors that squeeze in all kinds of modes designed for certain shooting situations, all but two or three are open-ended, leaving the shooter to decide how and when to use them.

They are all easy to experiment with, yet are also highly subjective. Food makes sense because it raises the saturation to bring pop to a dish. Square, first introduced in the G6, has been removed, likely in favour of Guide shot, which uses the same 1:1 ratio popular on Instagram.

As with other phones that offer it, I maintain Manual mode is the best way to shoot with the V30 in an overwhelming number of cases. The level of control with ISO, shutter, exposure, white balance and even focusing helps capture more usable and dynamic shots.

The interface is the same, so there are no real surprises. The film filters first introduced in the G5 are gone, but have been essentially replaced by a feature called Graphy. In a nutshell, Graphy integrates into Manual by allowing a user to hold down on a photo in its sub-menu and see the settings it was shot with. That way, they could apply them to a similar scene right in front of them.

It’s a novel idea for promoting the use of a superior shooting mode, except it left me puzzled at times. Graphy is also a standalone app on Google Play, where there are countless images with varying settings. Who shot these and where they shot them isn’t clear (save for obvious landmarks), and as of this review, there is no way to post photos to it.

LG reps had told me in New York that there was a possibility of opening it up to everyone, though I came away feeling it a non-committal response. If I shot something with settings I wanted to share, it would stand to reason that LG would want to promote that, along with other V30, G6, V20 or whatever other users’ creativity. However, from 2018, LG plans to launch a platform for any photographers to upload photographs in North America and some parts of Europe.

Filters became popular through apps like Instagram because they were democratized. Anyone could apply them. Sure, the filter used in a posted photo isn’t listed, but Graphy offers a chance to democratize an otherwise confusing mode for the average laymen with corresponding visuals and numbers. Hopefully, that changes in due time. As is, it’s a neat, albeit unpolished, addition worth trying when learning how Manual works.

Going back to the G4, RAW shooting was a constant in the Manual mode, and it applies the same way here. For those who love the idea of unprocessed images they can handle themselves, this is the way to go.

It matters because LG still has a nasty habit of using its processing to sharpen images to a point where artifacts and blotchiness can show when zooming in. Noise can also become a factor when shooting darker scenes in manual using the wide-angle lens. 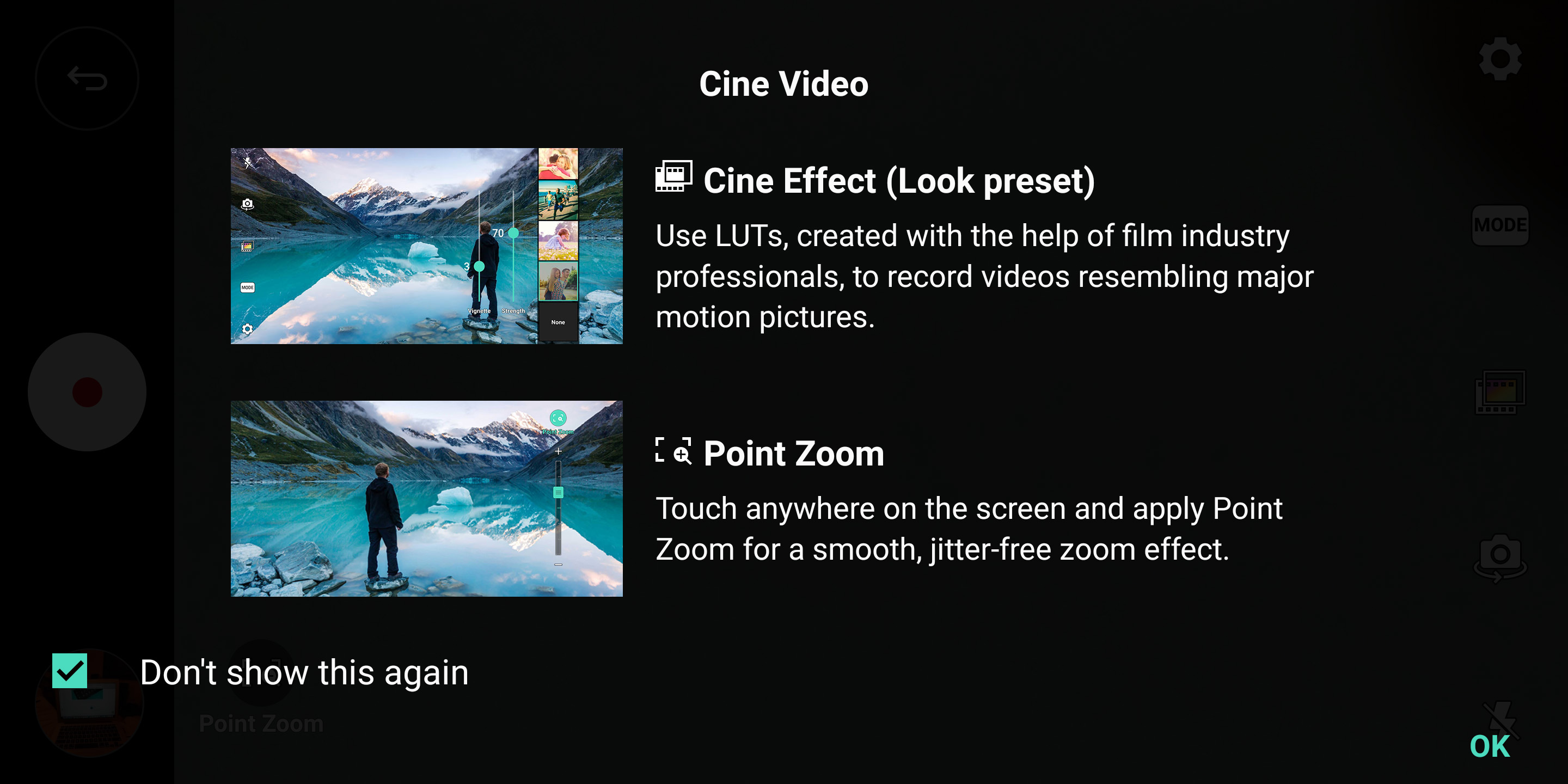 The biggest addition to the video side is Cine Video, a mode that takes filmmaking filter effects and applies them to video shot with the V30. A slider controls the filter’s density, enabling a form of control over how the footage looks. It’s all in real-time, so you see the effect as you’re ready to shoot, leaving out much of the guesswork.

The vignette slider is kind of a neat way to stylize a shot beyond the strength of the filter itself. The ability for Point Zoom to hone in on a specific part of the frame is also one of those unique features others haven’t done. It’s smooth and effective, to be sure, though I question its use for the simple fact it’s utilizing digital zoom, which pixilates the frame.

The wide-angle lens is also excluded from this mode, so there’s no way to shoot any scenes with it in Cine Video.

Another strange omission is the lack of framerate control. Here, we have a cinematic mode that doesn’t offer the ability to switch from 24, 30 or 60fps. Of those, 24fps is the one used for motion pictures, and from what I could tell, that’s not the default here. I had asked about this when first seeing the V30 in New York and no one seemed to have an answer — including in South Korea.

On a trip to Iceland, I was surprised to find that many of the filters didn’t translate well to the awe-inspiring scenery and landscapes in that country. With some adjustments in the strength slider, I could find a reasonable compromise, yet came away thinking a couple of new filters wouldn’t hurt. 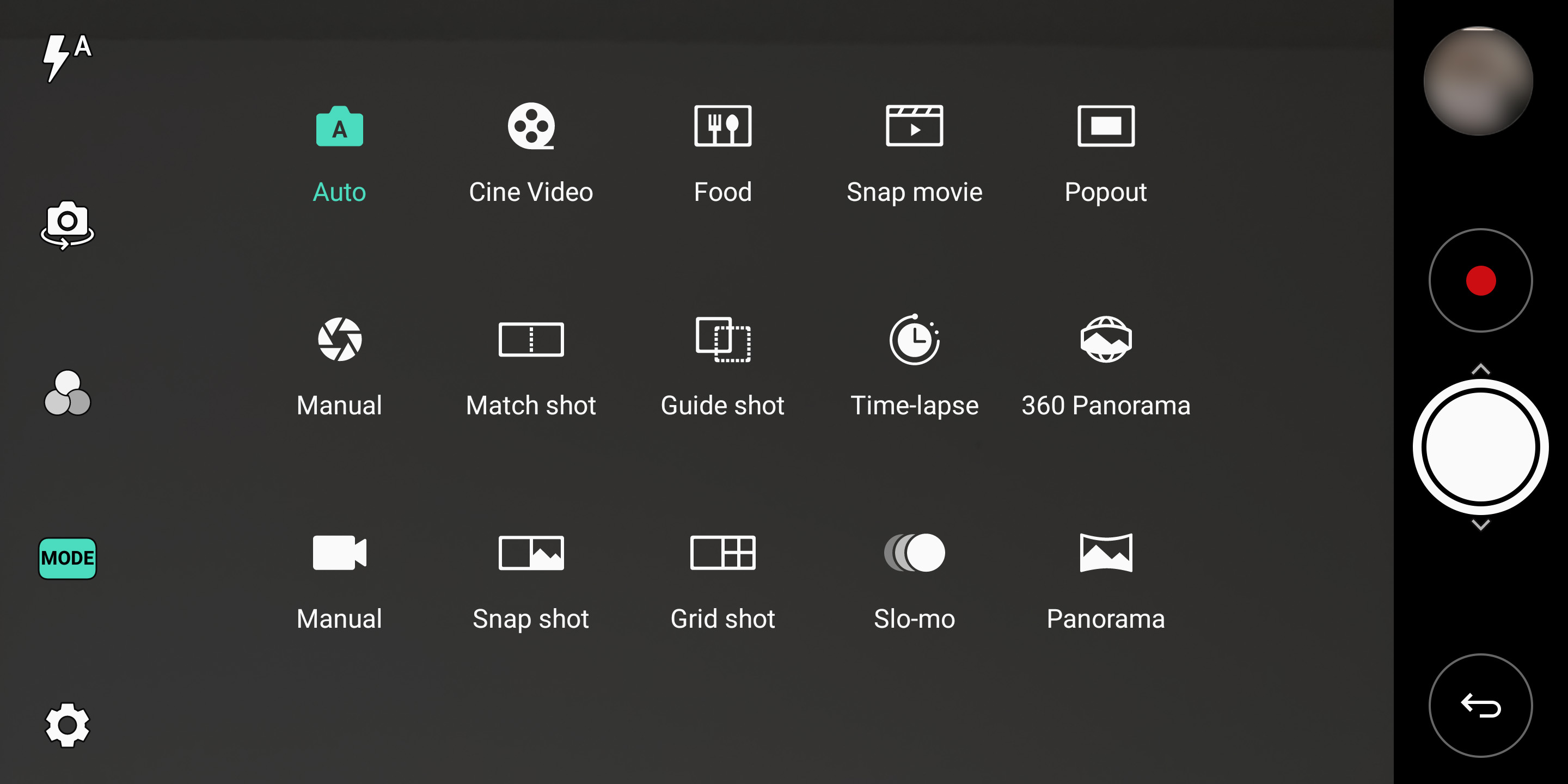 Having a manual video mode isn’t exclusive to LG, but with the excellent built-in audio recording, there’s a lot to like here. All the controls I enjoyed for manual still photos, I could use in this mode too. Plus, I could change the framerate in the settings from 1, 2, 24, 30 or 60fps. I could switch the bitrate to high for better quality, and make use of tracking focus to stick to a subject.

Switching between the standard and wide-angle lens at will opens up more opportunity to capture wider scenes that would require a lot of panning with the standard lens.

That the V30 shoots in 4K is not surprising, though it is nice to have when shooting in manual. Much of this is a carryover from the V20 and G6, however, so I’m extolling the virtues of features that are available on other LG devices as well. 30fps is the maximum frame rate that can be received from the image sensor for 4K support. 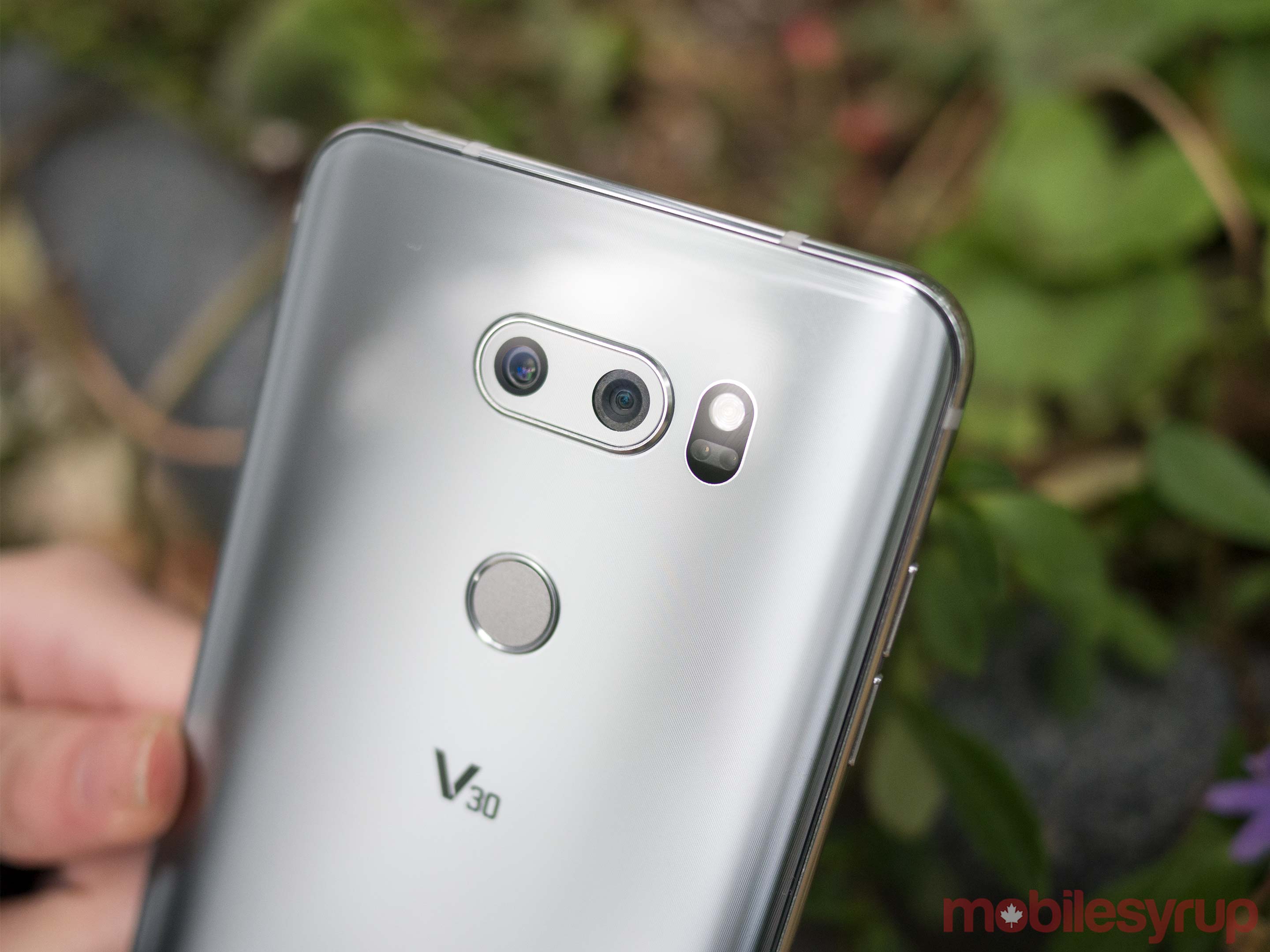 LG has tried to market its camera prowess with its phones, most recently this year with ads for the G6. It should keep hammering that message home because it has a superb mix of features and capabilities with the V30, in spite of elements that feel rushed.

I’m not sold on Cine Video’s effect just yet, but could be swayed by a few tweaks opening it up further. I can see how social media users would get a kick out of it, except there needs to be a differentiator that brings out more of the Hollywood effect LG is going for with it. Slapping on filters on video clips is already easy elsewhere.

The wide-angle lens is still one of the best features LG offers on its flagship phones. You lose some pixels with it, but you cram in a lot in the frame. Manual controls for both stills and video are still among the best in the business.

Still, competition is fierce with cameras these days. Google did something special with the Pixel 2/Pixel 2 XL. Apple upped its game with the iPhone 8/iPhone 8 Plus and iPhone X. Samsung did the same with the Galaxy Note 8. Others, like Huawei, Asus, OnePlus and Motorola have tried to push harder too. LG finds itself somewhere in that mix, when it should be staking a claim towards the top.