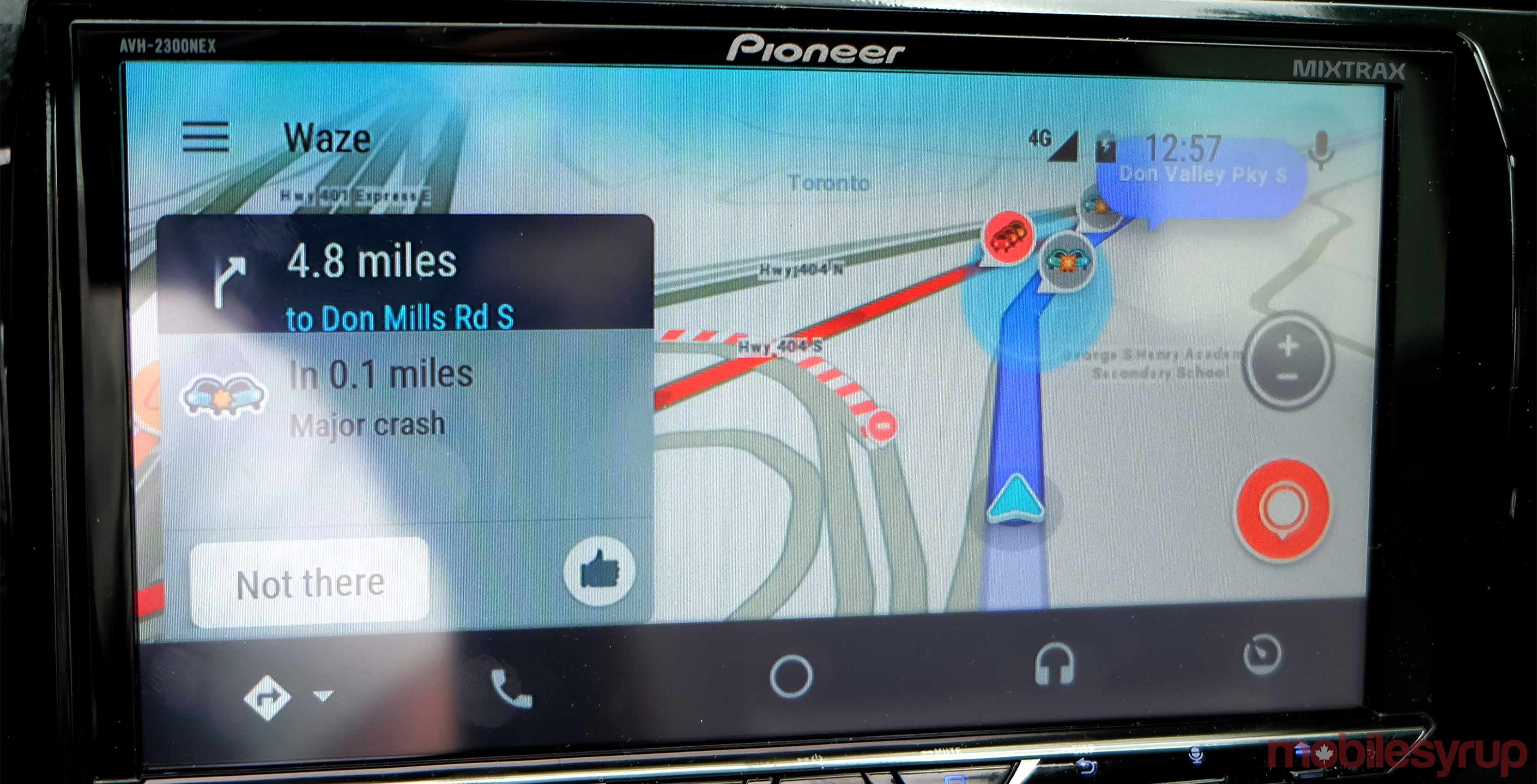 After a delay, a false start and a beta testing period, Google finally unleashed Waze onto its Android Auto platform, providing two navigation options for users, alongside Google Maps.

Why this didn’t happen sooner, given Google’s previous acquisition of Waze is unclear, but to make it work, developers had to optimize it to work with Android Auto. Being a projection platform that runs from the phone to a compatible head unit in the vehicle, it’s not a mirror image of the app itself. Some features are missing.

But the sum of the parts shows real promise, and outside of data concerns, it’s an excellent way to get around and traverse busy streets.

Get in the car 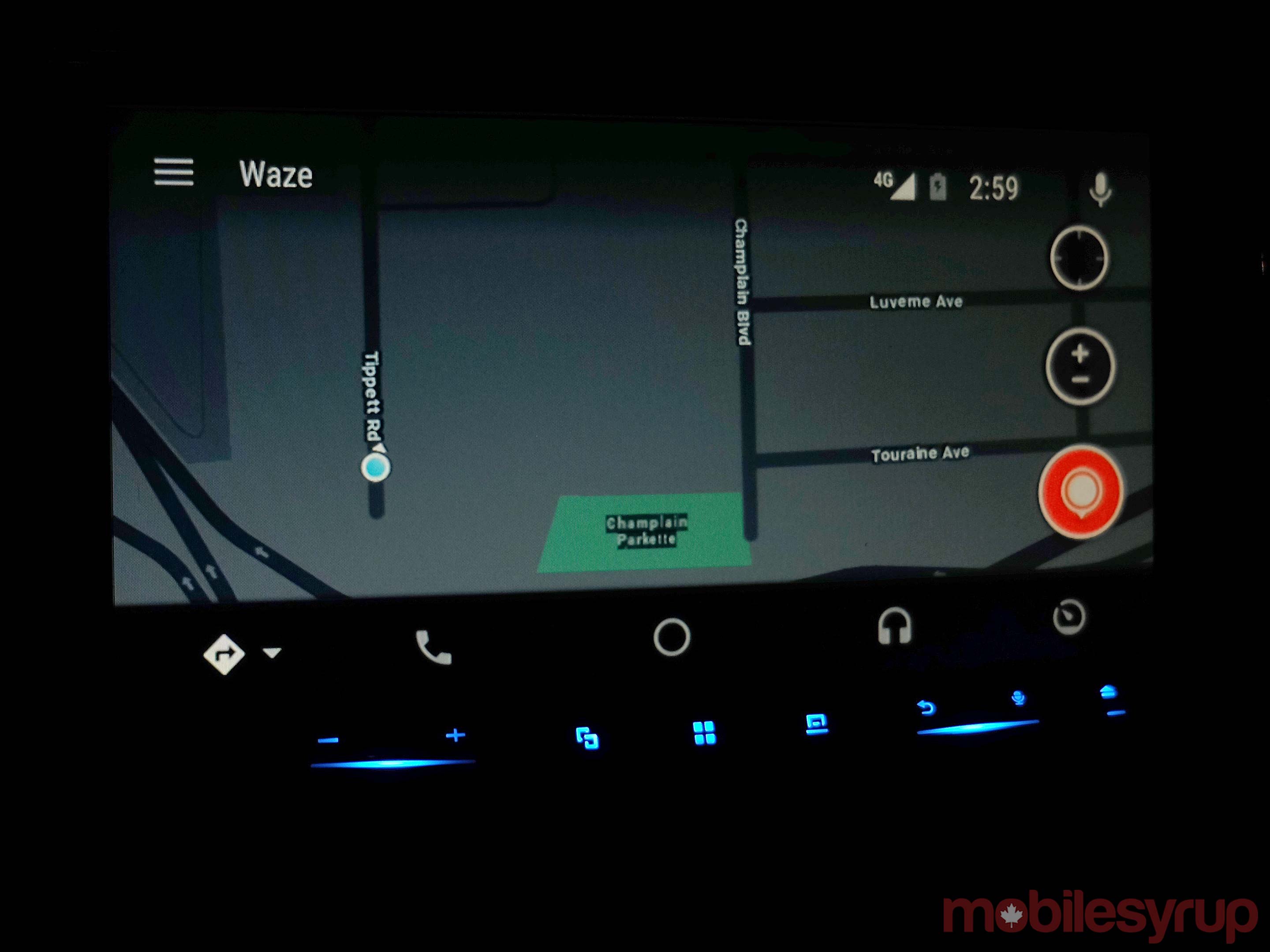 Waze is free to download and use, and having it already installed on a phone is necessary for it to work on Android Auto. It’s better to sign in with an account so that the app remembers settings and favourites. Even without that, however, Waze always appears with Google Maps as an option when tapping the navigation button.

The general layout is going to be familiar to Waze users. From the straightforward overhead map to the actionable report icons, it was a transition that felt largely seamless. The voice is the same, alerting me to upcoming red light cameras, traffic jams or police speed traps that may have been reported by other Wazers. Using larger icons made it effectively easier to report something myself because it only took two taps to do it.

Google Now also integrates with it, sending verbal commands for directions to Waze. Another way is to set it up on the Waze app before leaving home. After plugging in to launch Android Auto in the car, the mapping app picks up where it left off.

This was a rejigged iteration, so naturally, not everything made it over in the transition. Home and Work shortcuts are available, along with favourites and gas stations, but little else beyond that. No Planned Drives, Calendar Events or more intricate settings. It’s fairly barebones by comparison, though I suspect that’s partly the point.

Not all voice prompts sound off, though at least the most important ones do. The parking features didn’t seem to work, either. The gist of what’s available in this Android Auto version is simply getting around and crowdsourcing. 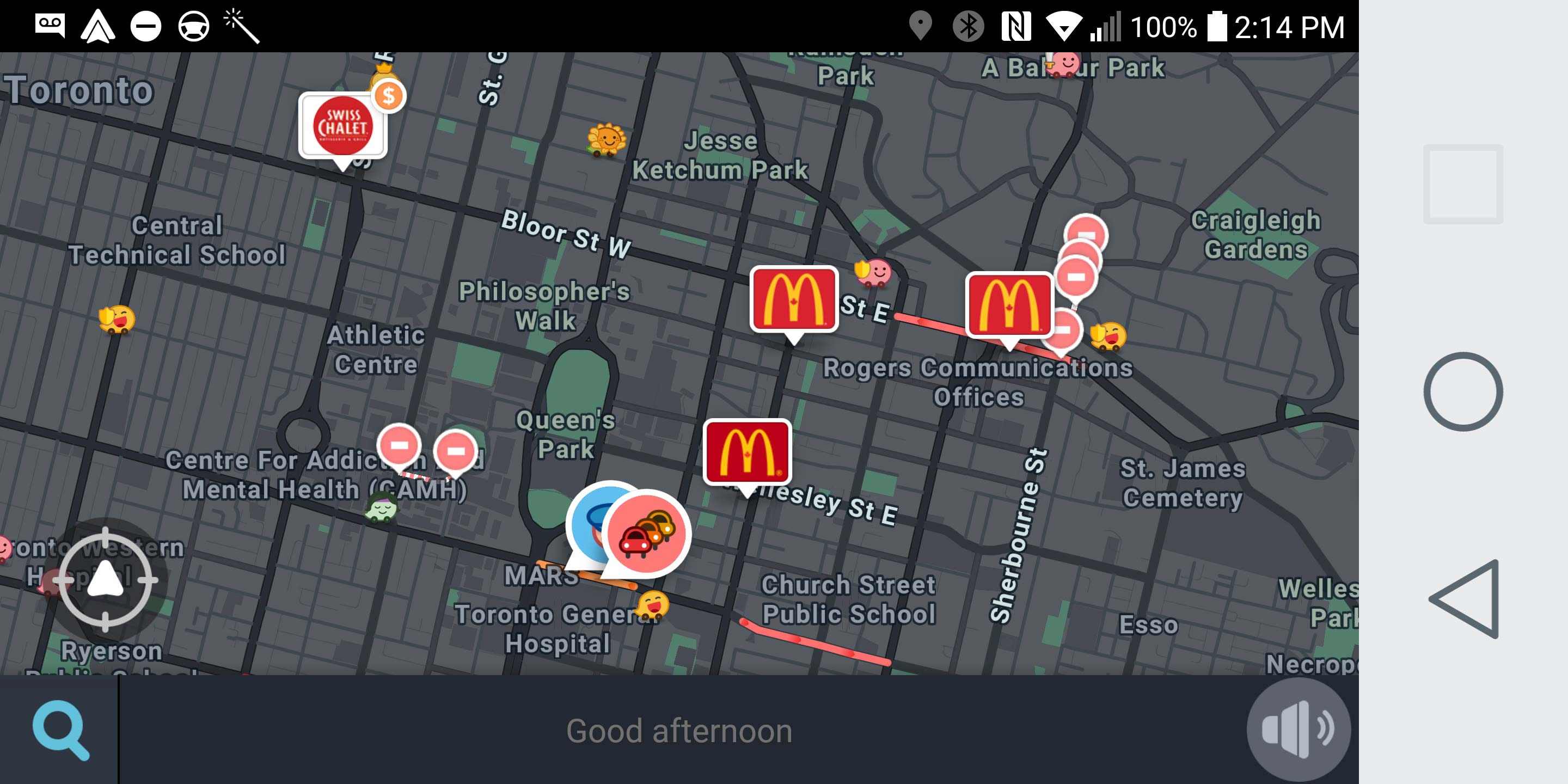 The beta version had its share of bugs, and not all of them have been squashed yet. Rendering was an issue at different points for me, where parts of a map wouldn’t load as quickly as others. In some cases, an entire side off the road I was on would appear blank.

Thankfully, this didn’t happen all the time, but there was a randomness to it that seemed odd. At first, I assumed it might have been a spotty data connection, but even at full bars, it happened on occasion. A software update is likely going to fix that, yet it’s one carryover from the beta that still emerged now and then.

Day and night dynamic mapping is the same, shifting colours and shades to go with the ambient light from outside. No surprises there. Choosing a route from within the interface is also easy. Once I chose a destination, I could then tap a route I wanted.

Crowdsourced information also appeared, as did contextual locations, like a gas station or McDonald’s or Starbucks. Logos would populate the map within range of the route, though I didn’t have to necessarily be navigating somewhere to see them. Just having the map on was enough.

Unfortunately, lane guidance is still not present, as it would be in Google Maps. Switching lanes, say, on a highway or three-lane thoroughfare, is entirely left to the driver to figure out because there are no prompts to do so other than how far away the turn will be. 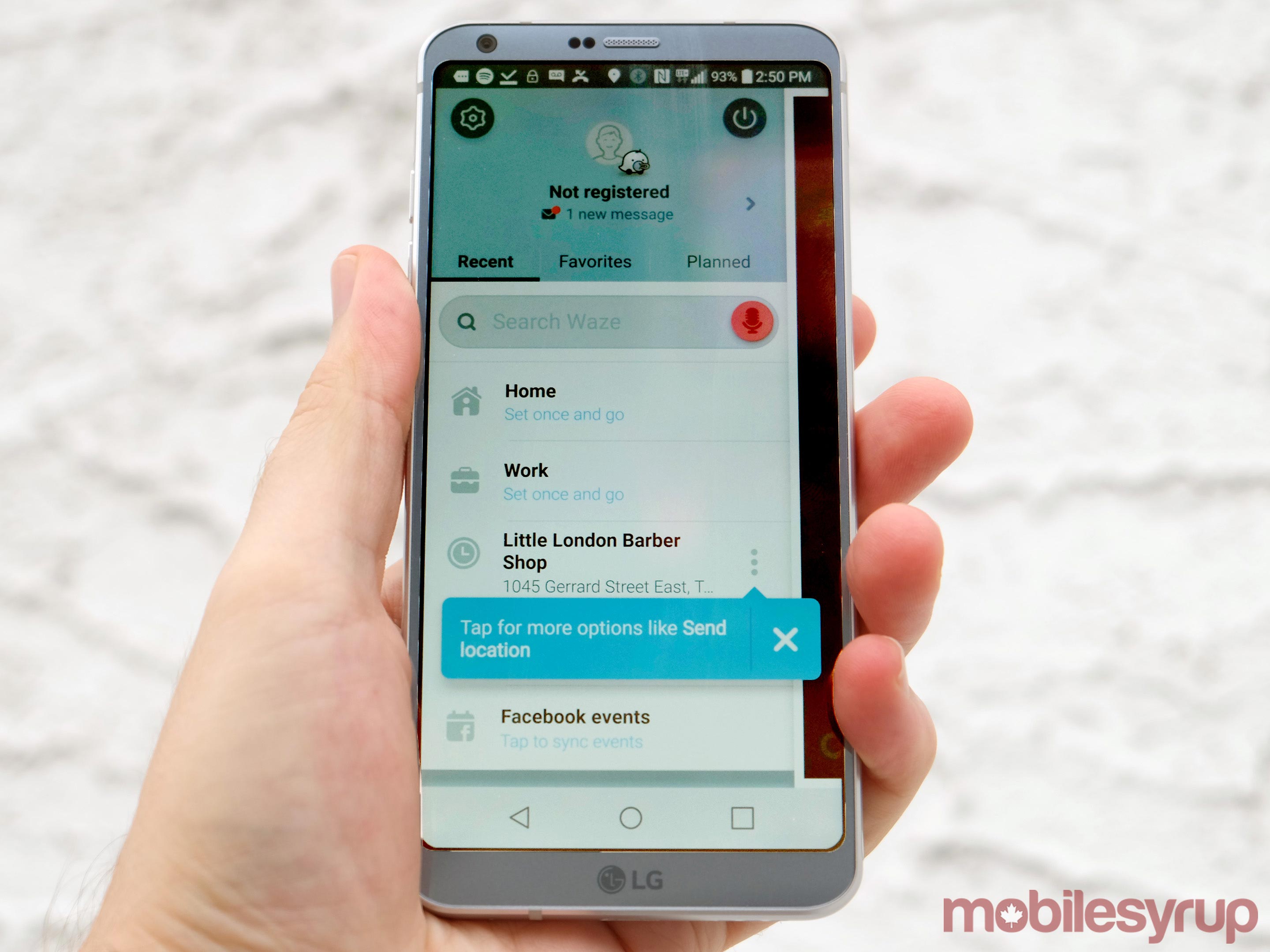 Android Auto runs on any phone with 5.0 Lollipop or later, and any vehicle or aftermarket head unit supporting Google’s in-car platform, is compatible.

However, Waze’s integration isn’t quite complete. When running the standalone Android Auto app on a phone or tablet, Google Maps always emerges as the default navigation option. Despite the developers not officially supporting the standalone app yet, I did manage to get it working with a weird workaround.

I launched the Android Auto app, tapped the menu button at the top left, went to Apps for Android Auto and launched Waze from there. For whatever reason, it loaded the map, superseding Google Maps — but only if done in that sequence. Once I went to the home screen and back to navigation, it always reverted back to Google Maps. 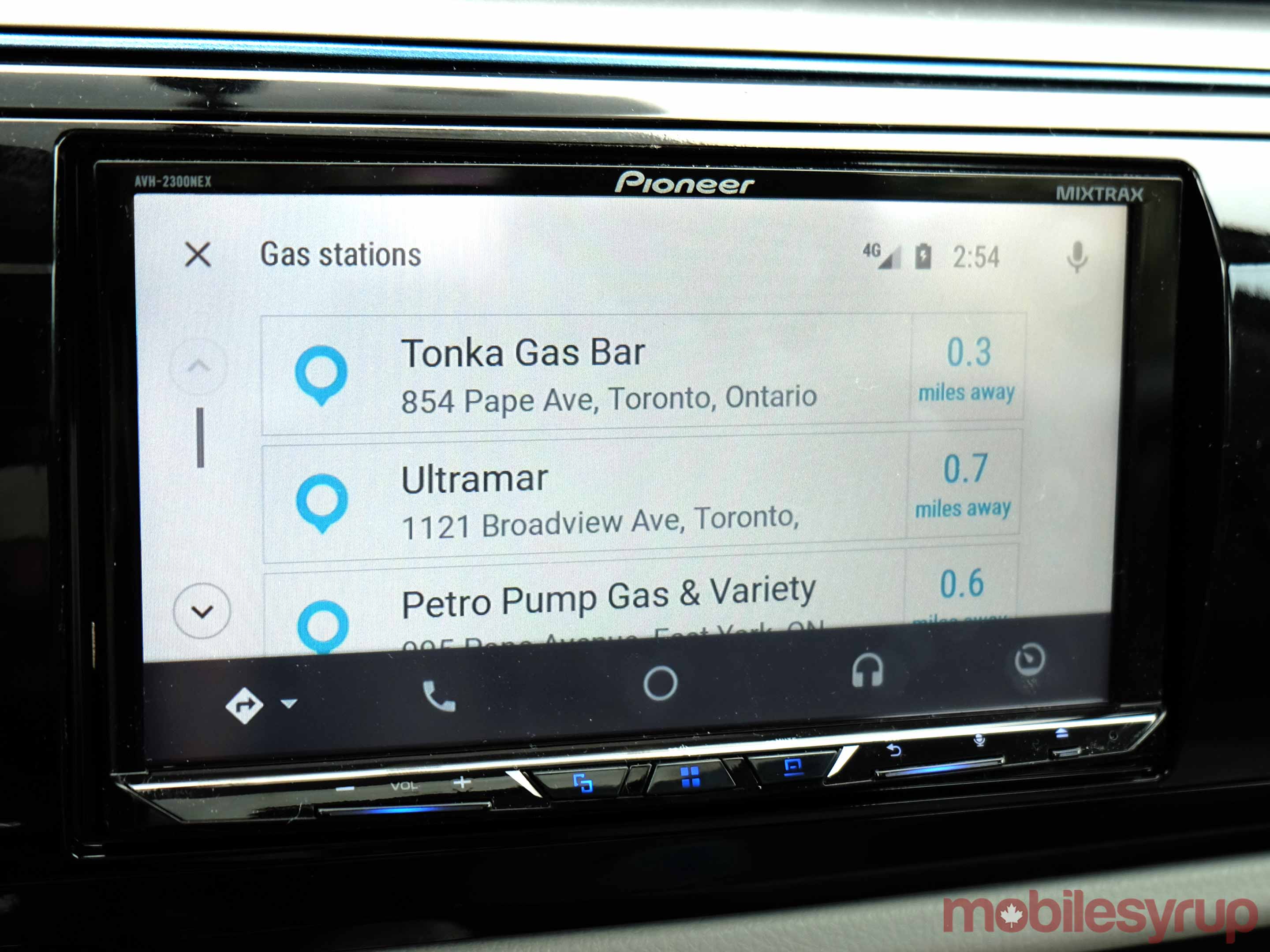 This caused two issues when attempting to use it. First, it wasn’t possible to play audio from any app that wasn’t Spotify without losing the map. Second, it forced me to fiddle with the notification pane in order to get it back. Since Waze was still technically running, turn-by-turn directions were still coming through audibly, but it was only when I tapped on the notification (“Waze is running”) that the map came back.

As a driver, it defeats the purpose of going hands-free. The Spotify integration is neat, letting me choose from recent playlists or tracks within Waze itself, but that’s of little comfort to those who don’t use it.

There are no immediate plans to bring Waze to CarPlay, mainly because Apple has chosen not to integrate any third-party navigation apps into its in-car platform. It’s Apple Maps only for the time being, and save some dramatic improvement, it will always be an inferior performer.

It’s a shame, too, because Waze’s iOS app works splendidly well, and would fit right in with the simplicity CarPlay provides. Other nuggets, like its Spotify integration, would also complement the platform well.

If Apple is to relent and allow third-party navigation apps, it doesn’t look to be anytime soon, and even if they do, there’s no guarantee Waze gets a pass.

As good as Google Maps can be in Android Auto, Waze is the navigation map that can be resourceful and efficient when driving to familiar destinations. Sure, it can be useful in road trips, but city driving benefits greatly when the map is dynamic and contextual all at once.

Data usage is always a consideration, given the lack of offline mapping. Using it on a daily basis will eat into a monthly data bucket, but there is a recourse. An advantage in calculating the route at home on Wi-Fi is that there’s less to render when using data because Waze preloads it. Doing it that way dramatically reduces how much data it uses, including for familiar routes.

This integration puts Waze in the proverbial driver’s seat, and coming improvements should only make it better for daily commutes.

"There are no immediate plans to bring Waze to CarPlay, mainly because Apple has chosen not to integrate any third-party navigation apps into its in-car platform"