Tacoma is a shining example of environmental storytelling done right 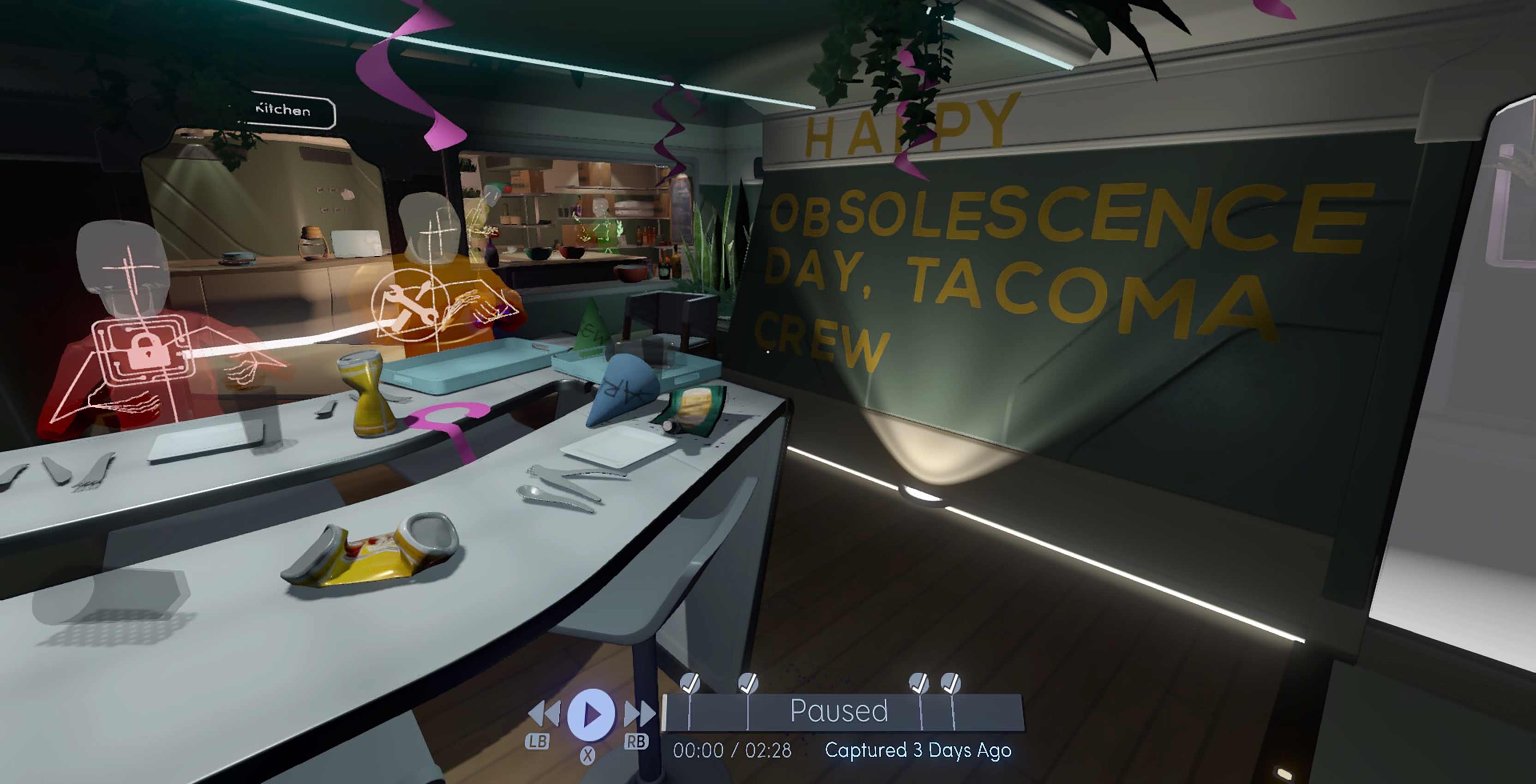 Abandoned space stations are often used in games to craft an atmospheric experience focused on either frightening the hell out of you, or putting you into zany sci-fi action sequences. In this case, System Shock, Dead Space and Alien: Isolation all come to mind.

With Tacoma, however, developer Fullbright wants to celebrate the beautiful, humanistic side of life aboard a spacecraft. Everyone has their own reason for being up there. Perhaps they wanted to escape their unhappy lives down on Earth. Maybe they’ve been struggling to find a job and this is the only one they could land.

Others may simply want to experience space travel. Over the course of my three hour playthrough of Tacoma, I got to find out all of this and more about six crew members as they discover the joy — and hardship — of living together in outer space, especially when all hope is seemingly lost.

Life among the stars

The year is 2088 and you play as Amy Ferrier, a contractor tasked with boarding the derelict Lunar Transfer Station Tacoma to retrieve data from the ship’s various sections, as well as recover the physical module of the AI ODIN. Three days prior to your arrival, the Tacoma was struck by meteors, leading the oxygen tanks and communications systems to fail. As a result, it’s up to you to explore the damaged space station and collect the required data. All the the while, you’ll view augmented reality recordings of the six crew members spanning the course of over a year, chronicling both their early and final days on the station.

What’s most interesting about these AR videos is how dynamic they are. Because they can be several minutes long, you’ll often see characters walking away from one another to do their own thing in another part of the ship. As a result, it’s impossible to see and hear everything that is going on in one viewing, meaning you’re encouraged to pause, rewind and fast forward to physically follow the digital characters as Amy to hear their sides of the story.

What one person says early in the video may be completely different from what he says to someone else towards the end of the video. In a particular recording, one couple, trying to remain optimistic in a group meeting about the dwindling oxygen supply, later went into a private room and admitted that they didn’t think they’d survive. Through tears, they hugged each other in consolation. 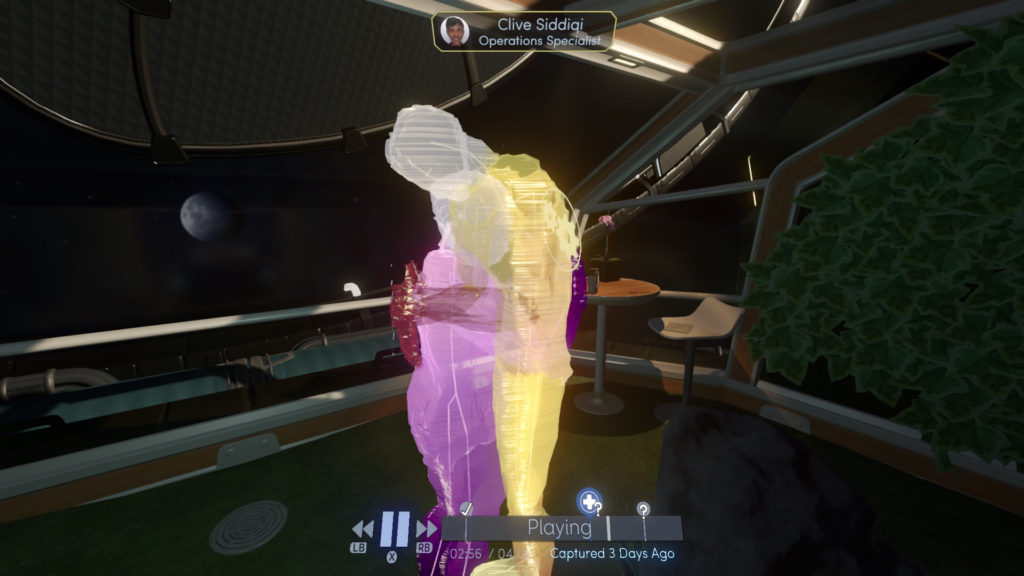 None of this would work, however, without the people performing these characters. Because the crew appears as blocky coloured silhouettes, you’re unable to see their facial expressions.

In other games, the nuance of these characters’ emotions may have been lost, but thanks to top-notch voice acting and excellent writing, the Tacoma crew truly comes to life.

It’s all in the details

At the same time, this is only part of the story. Arguably, you’ll stand to learn more if you go digging around the various kitchens, board rooms, medical bays, greeneries and more. As in Gone Home, Fullbright’s debut game, you can pick up most objects and fully rotate them. What’s great about Tacoma is you can explore as much or as little as you want.

You’ll find locked doors and passcode-secured lockers that can be opened using keys and combinations found through exploration. For instance, Clive, the operations specialist, has a gym locker that’s sealed with a passcode. Going to his personal quarters, I began poring through his chat logs with Odin. In one amusing exchange, he was expressing frustration over being unable to remember his password, cursing at the AI before he was eventually told what it is. With that information, I went back to the locker room, entered the code and opened the door. It was about as filthy as you’d expect from a sweaty man’s locker, and there were even notes complaining about his need to exercise. 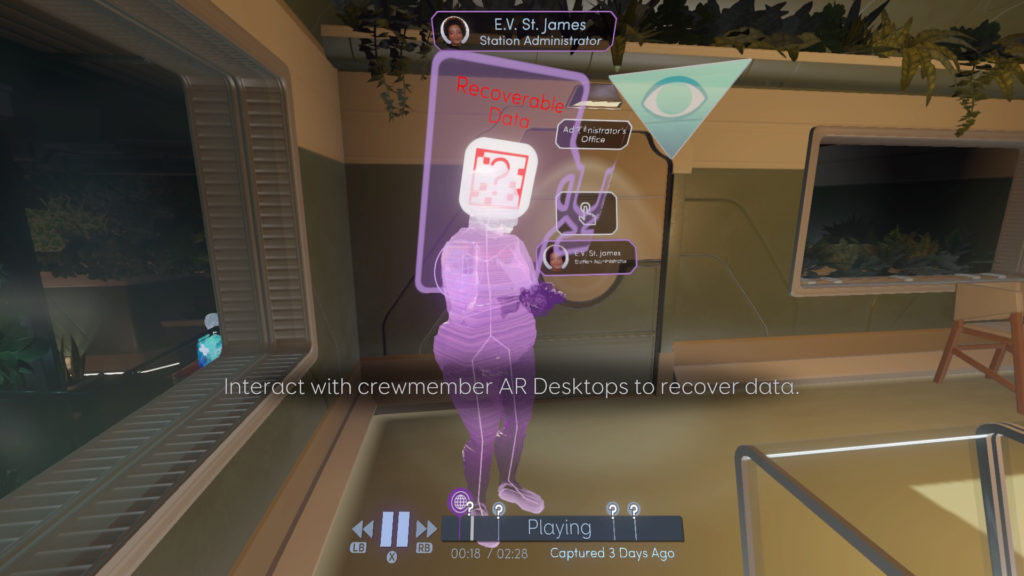 But the locker also had a key in there that was labelled “bunk drawer,” so I returned to Clive’s quarters and opened up the container — inside was a handwritten note addressed to his parents. In addition to telling them how much he missed them, he was also raving about one of the other crew members and how he’d become rather fond of her.

Having personally seen his interactions with her in the AR recordings and how he initially tried to play off his feelings, I already had some context to this letter. He also told his parents how wonderful the woman was and how he’d one day like them to meet her, perhaps at a nice home-cooked dinner gathering. Later, when I would see them consoling each other in that starboard room, I could appreciate how their relationship blossomed over time, as I was present to see it happen. 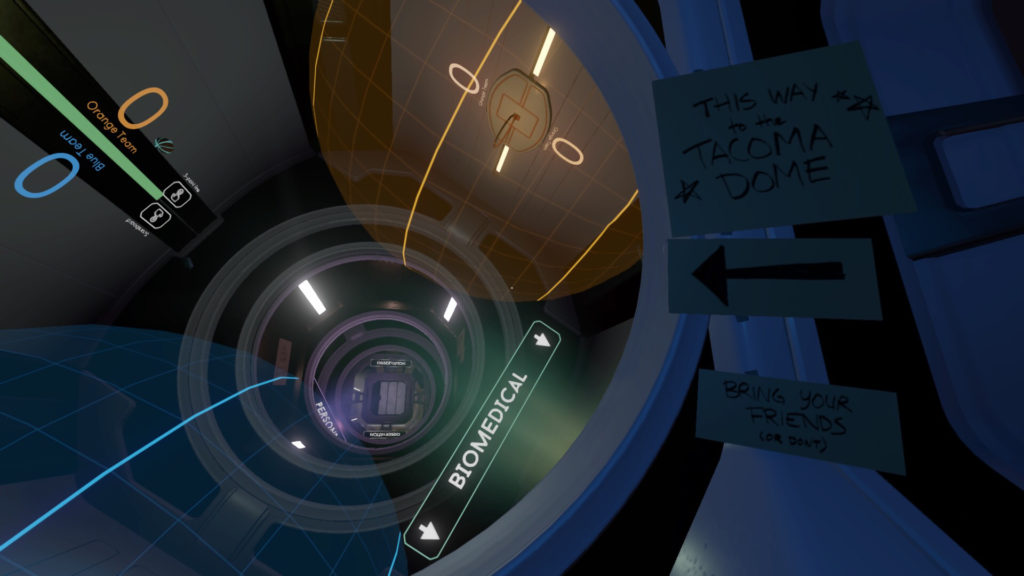 Another message was between one of the crew members, Andrew, and his husband back home, who expressed his frustrations with raising their son Nicholas on his own. The man on the Tacoma felt hurt by what he called “emotional sabotage” and tried to assure his partner that his stationing on the ship was to help secure a future for Nicholas.

Before this, I had found various pamphlets strewn about Andrew’s room detailing all kinds of educational institutions, as well as financial support programs to help pay for them. One of these booklets explained that a perk to working with Venturis is that they provide scholarships for your children. While the game doesn’t explicitly spell all of this out, I could still understand through some digging around why Andrew took the Tacoma job in the first place, and it makes his pleading with his partner to understand all the more heartfelt.

What in the world?

It’s easy to see where the strong narrative and characters come from, given Fullbright’s background on multiple BioShock games. But while that series forces you to fight all kinds of deranged enemies in between exploration, Tacoma gives you a completely stress-free environment to delve into. I appreciate that as a departure from most games; Fullbright doesn’t feel compelled to shoehorn in combat sections to pad out the game in ways that may discourage you from poking around more.

As a result, you’re free to look around at your leisure, taking in this richly-crafted setting packed with all kinds of details. An extremely stressed doctor’s box of chocolates hidden underneath the bed in her cabin. An absentee father catching up on the life of his earthbound son through pictures, birthday cards and messages. Cake recipes that a man has been feverishly studying to surprise his friends with. You could go through the entire game and miss these facts, which makes it all the more rewarding when you finally discover them. 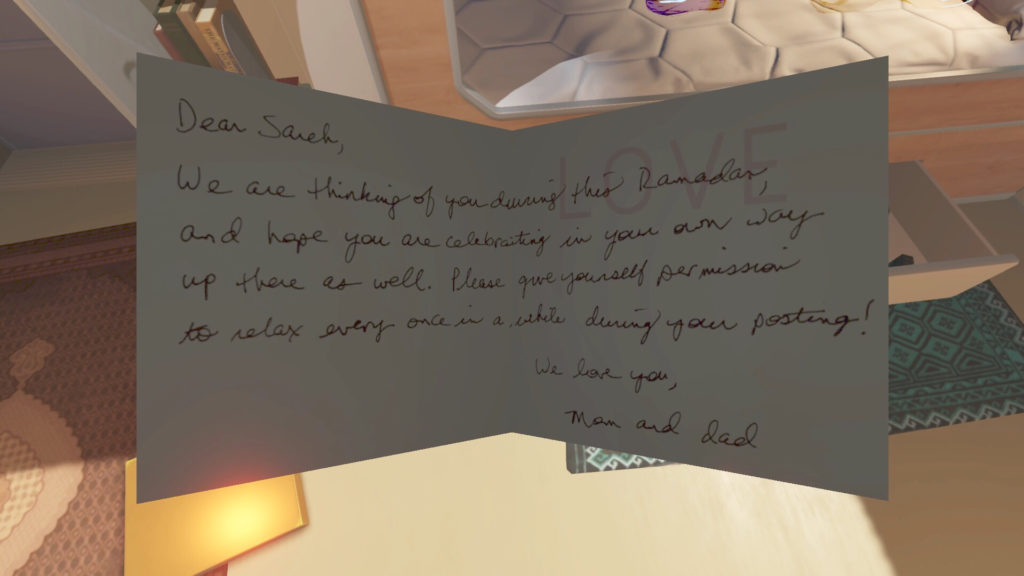 What’s more, as you come across all of the e-mails, Venturis documents, newspaper clippings and the like, you’ll also start to piece together the larger world surrounding these characters. Surprisingly, there’s an interesting amount of backstory regarding the politics of the Venturis company and how it has lobbied for the use of artificial intelligence to completely replace human workers. Oftentimes, I became equally compelled to learn more about the capitalist nature of the universe Fullbright has created, especially when not everything was always as it seemed.

Unfortunately, there are some small technical problems that occurred during my time with the game. There are moments when you’re travelling between modules on the ship when the game outright freezes, evidently as the next section is being loaded. A more graceful way of handling these necessary load times wouldn’t have gone amiss. Moreover, there was one particular moment in the third module of the Tacoma where the framerate chugged heavily as I opened a few different computer files. The game previously had no trouble handling multiple logs at once, so this instance was particularly notable. Thankfully, the game otherwise ran smoothly on my Xbox One. 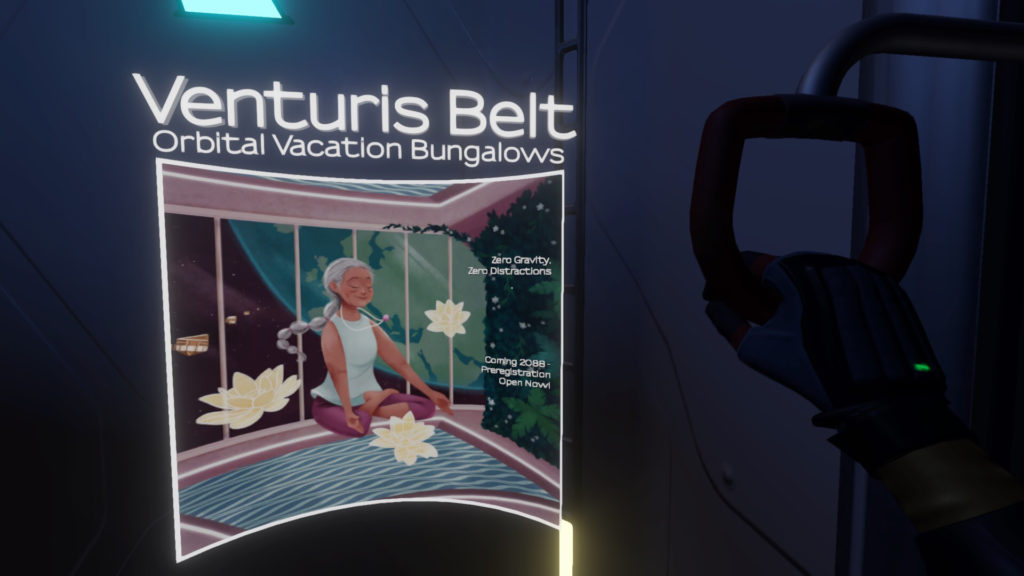 It’s clear that Tacoma won’t win everyone over. Like Gone Home, its minimalistic approach to gameplay will undoubtedly put off many people, especially those who pejoratively refer to these kinds of games as “walking simulators.” Those who do give Tacoma a chance, however, will be treated to a thoughtful, fascinating and often touching look at a cast of believable characters who you’ll quickly come to profoundly care about.

It’s a testament to the narrative potential of games — and the talent of the developers — that a science-fiction world and its inhabitants can so fully be realized through what is ostensibly a handful of flashbacks and items. The future is now.

Tacoma is available for download on PC and Xbox One for $21.99.