The 5 gadgets every motorcycle rider needs 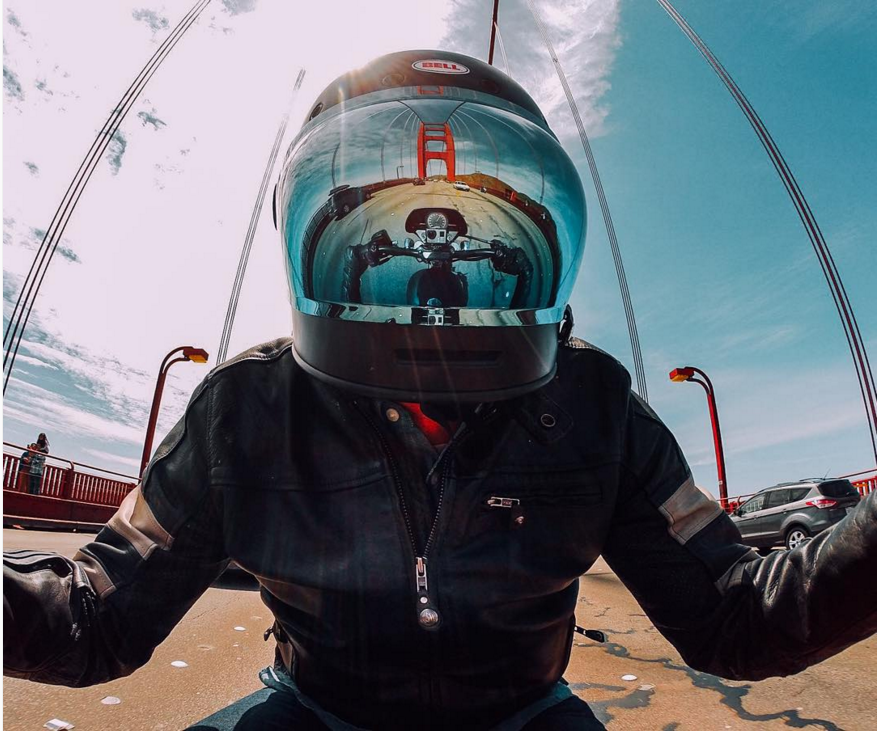 It’s springtime here in Canada (finally) and that means that legions of two-wheeled motorists are putting away their parkas and waking up their bikes from a long winter’s nap.

For those who love their motos, nothing beats a beautiful day and an open road. But as with so many activities, even the purity of motorcycling can be improved with just the right amount of tech. Here’s our pick for the five gadgets every biker should consider taking with them on their next ride. 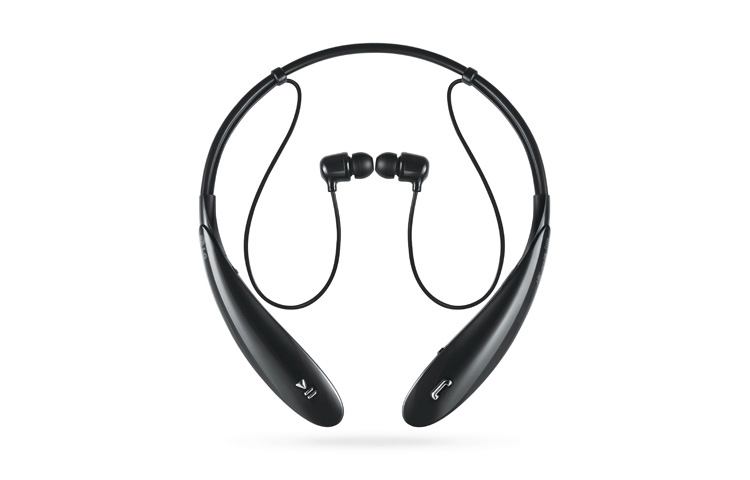 You might be the kind of rider who believes that nothing should come between you and the road and the wind, not even music. We respect that. However, that pervasive wind blowing past your ears is the leading cause of hearing impairment from riding and you need to protect yourself. The best way to do that is to buy and always use safety earplugs. If, on the other hand, you do want to ride with tunes — or be able to hear GPS instructions — consider using a set of in-ear, sound isolating Bluetooth headphones. The LG Tone Ultra series are our pick for motorcyclists for three main reasons:

First, the earbuds fit snugly, going deep enough into the ear canal to seal out most (but not all!) external sounds. They don’t stick out much, which means they’re less likely to become dislodged when putting on a helmet. The included 3 sets of silicone sleeves means most folks should be able to find a comfortable fit. They aren’t intended to guard against wind-related hearing loss, but they’ll be way better than nothing. Because the earbuds are tethered to the collar, there’s no way you’ll lose them if they come out accidentally.

Second, battery life is good enough for even the longest of rides. LG claims about 9.5 hours and that seems to be pretty close. Unless you’re competing for the Iron Butt World Championship, these ought to last you.

Third, and possibly most importantly for riders, the controls are still accessible even with a helmet on thanks to the horse-collar design. The only gotcha here is that the buttons are small and may be tricky to use with gloved hands. 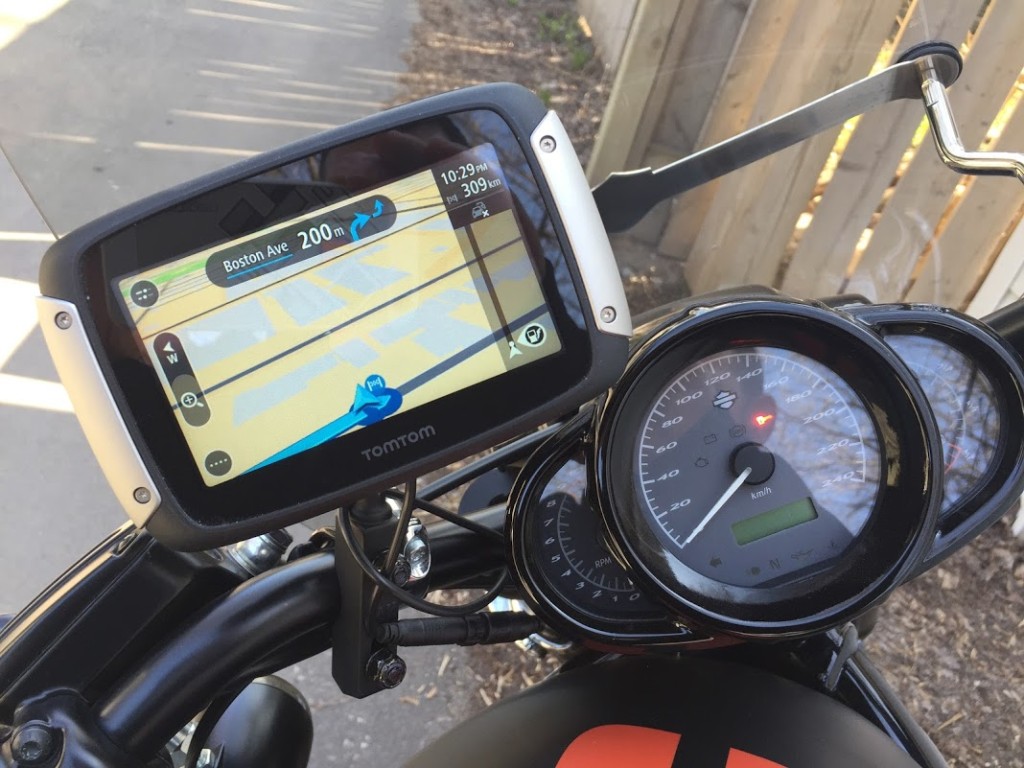 Heading out for a ride is an adventure. Going map-free and finding unexpected sideroads that turn out to be buried treasures is what it’s all about for many of us. But getting lost, or having to concentrate on a paper map stuck to your tank isn’t any fun, which is why a dedicated motorcycle GPS is such a good addition to any biker’s tech arsenal. Take the TomTom Rider 400 for instance. Based on Android OS, it comes with its own mounting arm and can rotate 90-degrees so you can see your map in either portrait or landscape view. It has a built-in battery, but it also comes with a wiring harness so you can run it off your bike’s electrical system.

Motorcycle GPS units are not small investments; the Rider 400 is a princely $659 CDN. This leads many to ask why they can’t simply use their existing smartphone instead. In truth, you can replicate many, if not most of the functions of a dedicated GPS device this way, but there will be some drawbacks. First, you need to find a rugged mounting system – one which not only positions your phone within easy reach, but also protects it from the elements (not all rides are dry rides unfortunately).

The mount must let you use your phone even with gloved fingers, and provide a way to plug the phone into the bike’s battery (constantly running GPS with the screen on will drain your battery very quickly). Next, you’ll need a GPS app. Google Maps will do in a pinch — and it’s free — but its interface isn’t glove-friendly and it certainly won’t help you find windy/twisty roads, something the TomTom Rider excels at. A better choice would be the motorcycle-friendly MyRoute App, which is free for basic functions like route planning, but costs €99 for a lifetime premium membership.

A system like the TomTom Rider not only gives you typical GPS features, it adds several that are custom-built for bikers such as: Route Planning — you choose a specific route, with as many stops or detours as you like, which can be uploaded to the Rider either from your PC or better yet, from the free mobile companion app. 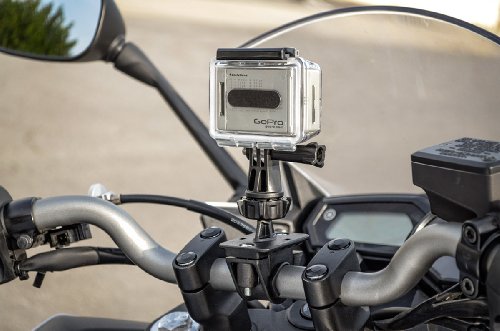 Some rides are just about getting from A to B. Others are about finding new roads and riding with friends. For these rides, nothing beats the ability to capture a visual record of the more memorable moments. That’s where action cameras come in. With their wide field of view and rugged construction, these devices were made for life on a bike. In fact, if you use one as a dashcam substitute (we still have no idea why this isn’t a thing for bikes yet) it might even make the difference between “I’m telling you, officer, he cut me off,” and “Let me show you, officer, how he cut me off.”

While action cameras vary wildly based on features, we have no problem recommending the GoPro product line. These cameras have been tested under every imaginable circumstance and their interlocking tab mounting system has become a de facto industry standard.

You may have seen riders with GoPros mounted to their helmets, usually perched on top, or sometimes on the chin or the sides. None of these are good. Mounting something as large as a GoPro to a helmet vastly increases the chances that the helmet won’t be able to do its job, which is to protect your head. Instead, consider using a Ram Mount or other handle-bar system. You won’t get that top-of-the-world perspective, but neither will your footage suffer from your head movements.

For a real step-up, consider buying 360-degree camera like the Canadian-designed Bubl Cam or you could wait until later this year for the release of the Samsung Gear 360. With these cameras, you never need to worry about taking your eyes off the road to enjoy the scenery — you simply do it after the ride. 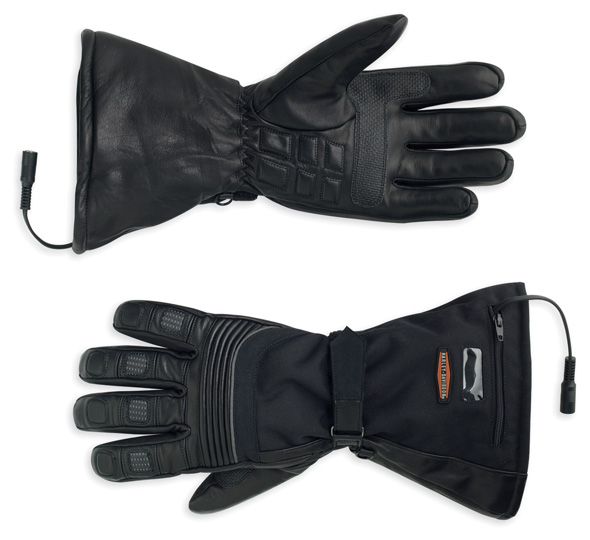 Nothing ruins a ride quite like getting cold. Especially if you’re a long way from home or a good place to warm up. Being cold is not only uncomfortable, it can be dangerous too – everything from a loss of attention to numb extremities not being able to work the controls spells trouble when you’re on a bike.

Thankfully, there’s a solution in the form of heated clothing. You name the body part and there’s likely an electrically-warmed garment for it. We think the two most important areas are hands and core (chest). Cold hands are obviously bad, but a cold body can bring on the shivers, adding unwanted tension.

Brands like Firstgrear and Gerbing are popular among riders, but there are also Harley-Davidson models that come as a glove, a heated liner for an existing pair of gloves or even a style can be powered by batteries. Price range from $90-$300. 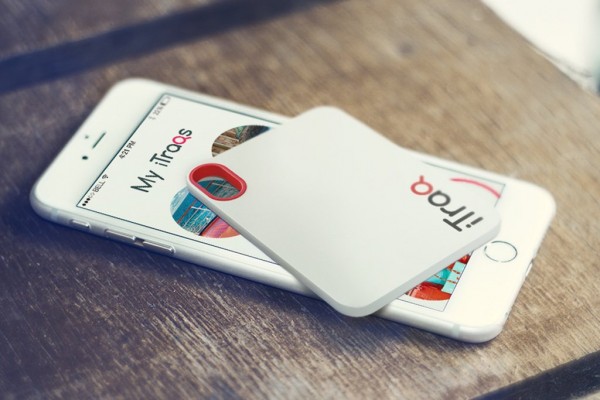 The biggest fear for any motorcycle rider is getting into an accident. But the second biggest fear is having one’s bike stolen. You can have a security system installed, you can invest in a variety of locking devices, but ultimately, if a thief wants your bike, it’s pretty hard to stop them. That’s why more and more riders are looking at ways to get their ride back in the event that they take a trip without them.

If you’re on a budget and live in a big urban area with lots of people on smartphones, concealing a Bluetooth tracker in your bike could get help you find it after a theft. At least, that’s what reportedly happened to one lucky motorcyclist in San Francisco after stashing a Tile under his seat. Of course, Bluetooth is only effective if someone with a compatible app walks within 20-30 metres of your lost ride. A more reliable solution is a tracker that can communicate its position via a mobile data connection with the help of actual GPS.

There are many available on Amazon, but they all suffer from the same limitations. You’ll need to buy a SIM card so they can connect, and pay for that data plan monthly. You’ll also need a way to keep them powered continuously, which can be tricky when leaving your bike for extended periods.

A better solution is the recently announced iTraq, a tiny, credit-card sized tracker that has a built-in SIM card, which is compatible with almost every mobile provider and has a rechargeable battery. It consumes very little power, but best of all, you don’t have to set up a mobile subscription for the data. Instead, you buy credits for “traces.” The more traces you want to perform, the more you pay. An unlimited plan is $99/year, which is $140 less than you’d pay if you had to buy your own data plan.