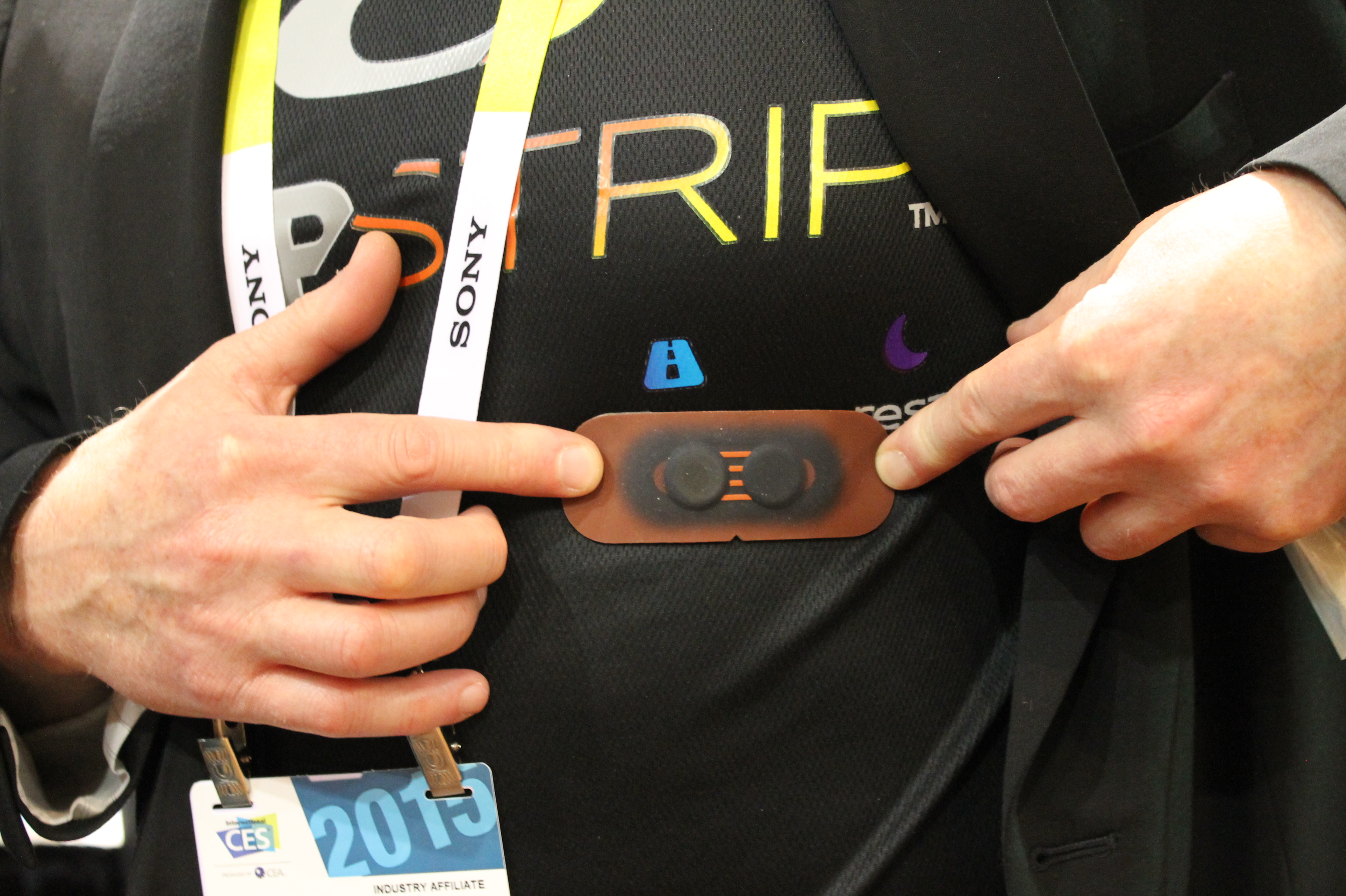 Wearable tech was definitely a hot device category at Unveiled on the opening evening of CES, January 4th, but beyond the wrist-worn fitness trackers and smartwatches I picked up on one big trend: wearable stickers.

A number of companies revealed sensor-filled wearables today that stick on your body with adhesive, allowing them to be more discrete and gain better access to the body to derive more accurate and continuous results. 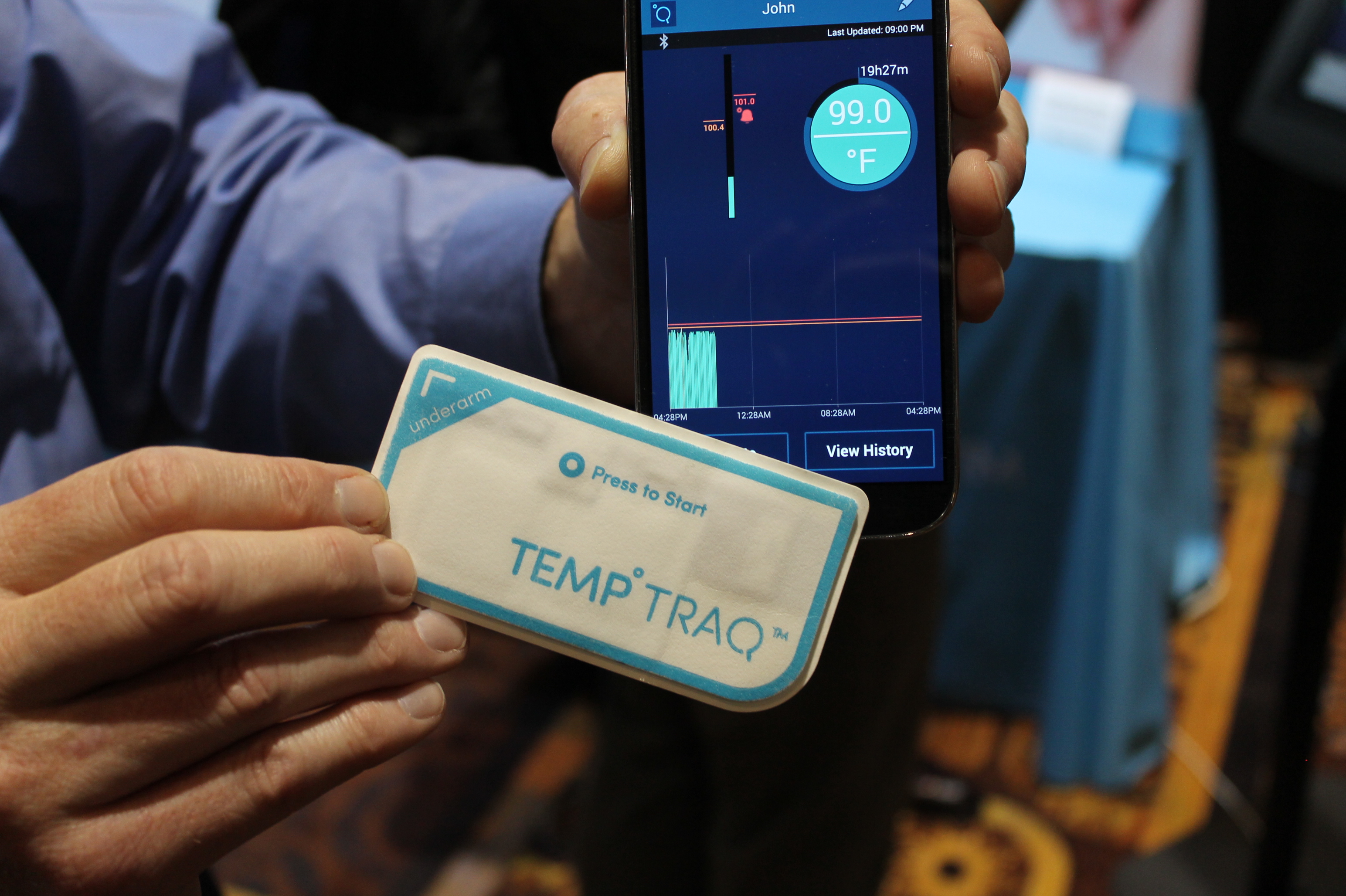 Blue Spark Technologies is currently undergoing FDA premarket review of its thin, flexible, wearable thermometer for babies called TempTraq. The daily disposable patch, the size of a business card, is adhered onto the baby under his or her arm to provide continuous temperature monitoring which can be reviewed in a companion app. The Android and iOS app will also send alerts of a child’s temperature to tell parents if a fever spikes. 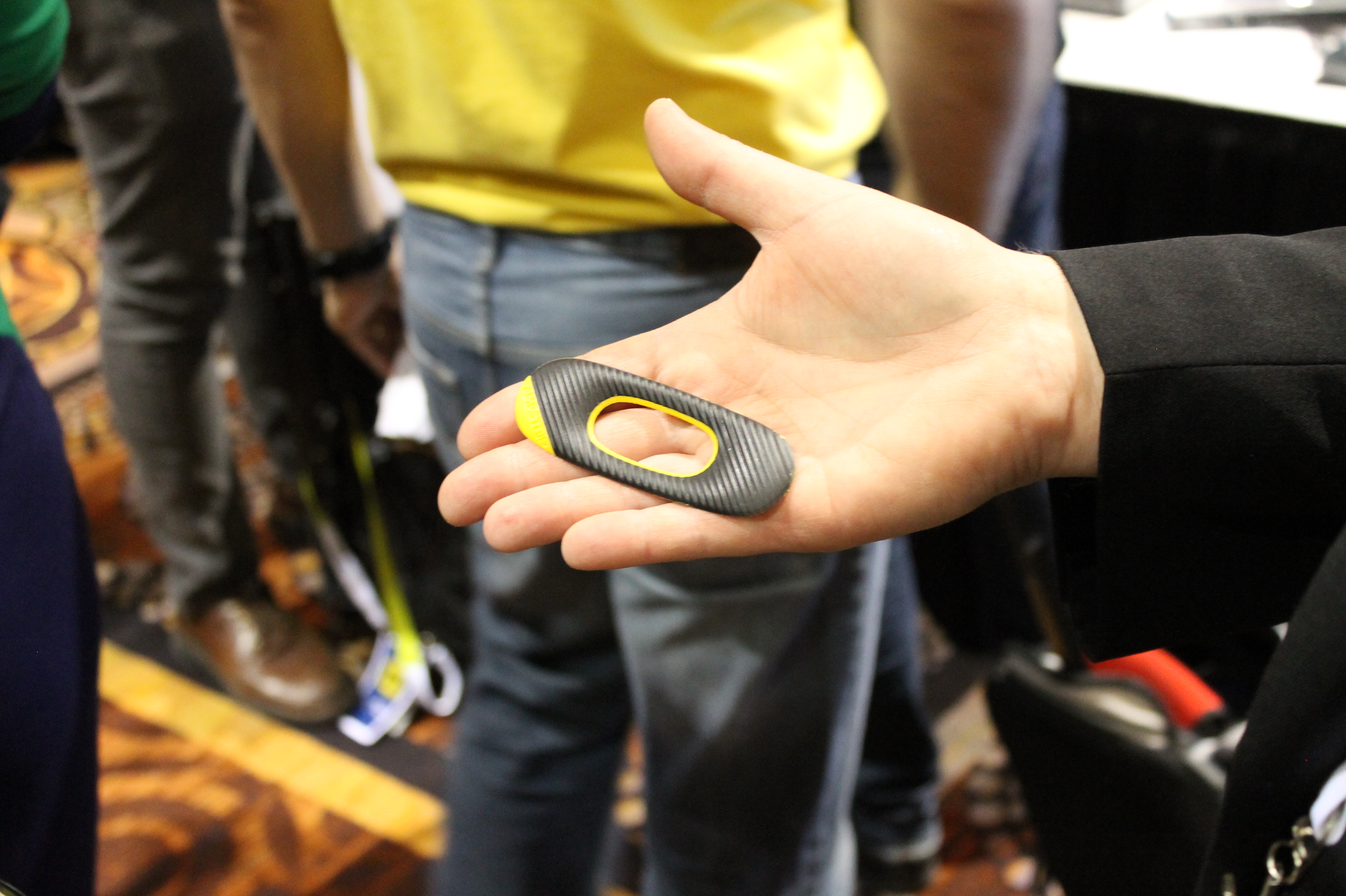 Fitlinxx is targeting the weekend warrior and amateur athlete with its heart rate patch the AmpStrip. The thin, waterproof device, which will eventually look like a Band-Aid, tracks heart rate and activity around the clock when stuck to a user’s torso using medical grade adhesive. The final design is expected to be 3.5 inches long, 1-inch wide and less than a quarter of an inch thick including the adhesive.

I saw an early prototype of the flexible device and it felt like a slightly thicker bandage, almost like a second skin — which is pretty impressive considering that the AmpStrip houses a single lead ECG, 3-axis MEM’s accelerometer, a skin proximity Thermistor and on-board memory. Unlike the TempTraq, the AmpStrip device is meant to be re-used, with the adhesive expected to last up to three days. The companion app for the device will let you know users know when to change the adhesive. Fitlinxx will offer replacement adhesive which is competitor grade designed to stay on the skin in the most rigorous conditions including pool and ocean workouts. 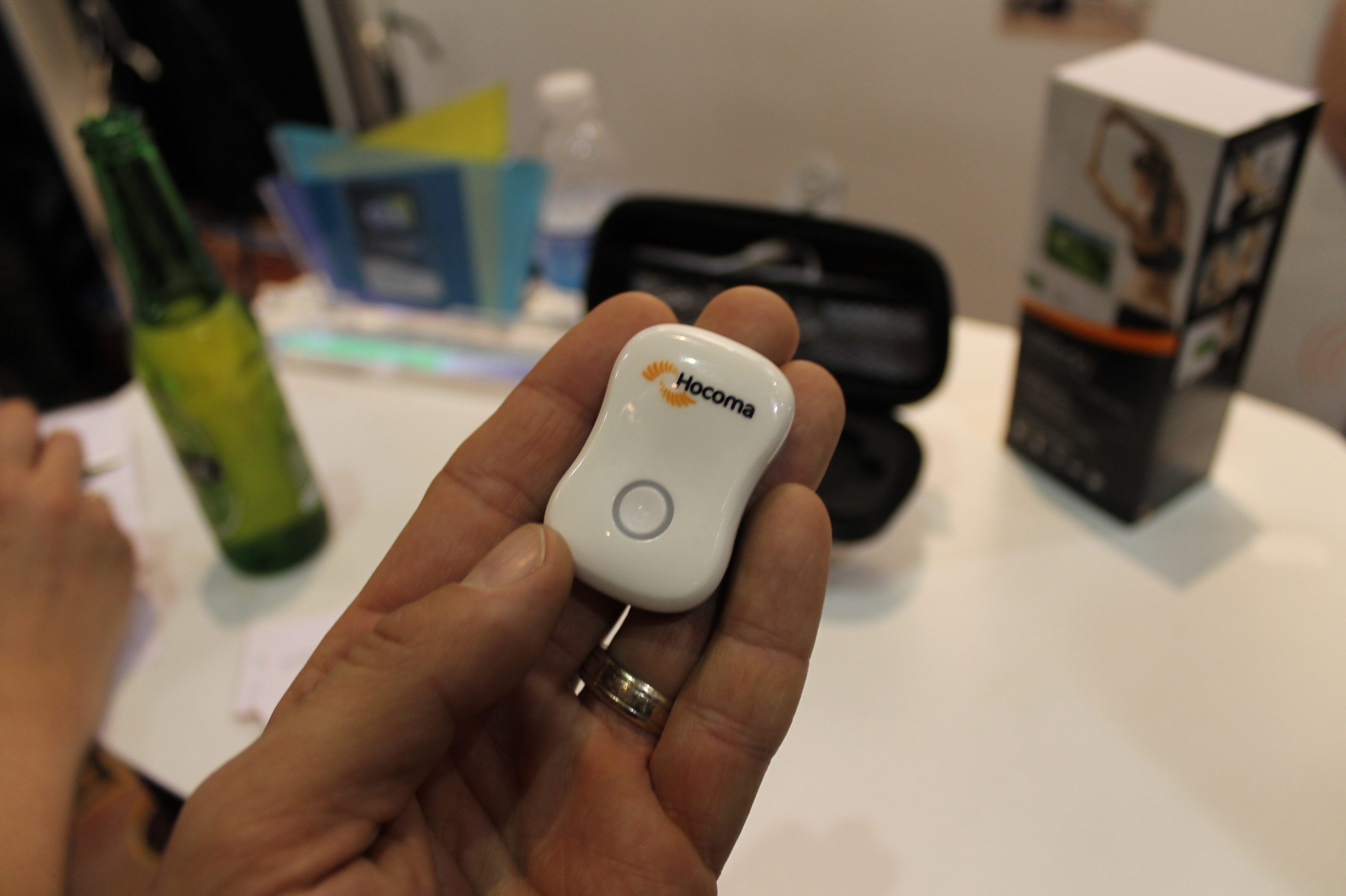 Working out was also the focus of the third adhesive wearable I came across called Valedo from Hocoma. Hocoma is a market leader in developing robotic and sensor-based products for functional movement therapy. Valedo is wearable system which gamifies lower back physiotherapy. The system includes two devices each equipped with an accelerometer, gyroscope and magnetometer. The devices, which are much thicker than the ones we saw from Fitlinxx and Blue Spark, adhere using double sided medical tape, one to your sternum and the other to your lower back. Hocoma provides about 200 of these stickers but if you are hairy or sweat a lot, you may have opt for a strap accessory.

The sensor-filled devices are used to monitor the movement and position of the user as they perform exercises via a game on the iPad or iPhone. Hocoma has included over 45 exercises in the companion app, all of which you would do with a physiotherapist to tackle lower back pain. This home-based system gives immediate feedback and the gamification aspect aims to motivate patients to go beyond what they would normally do alone at home. 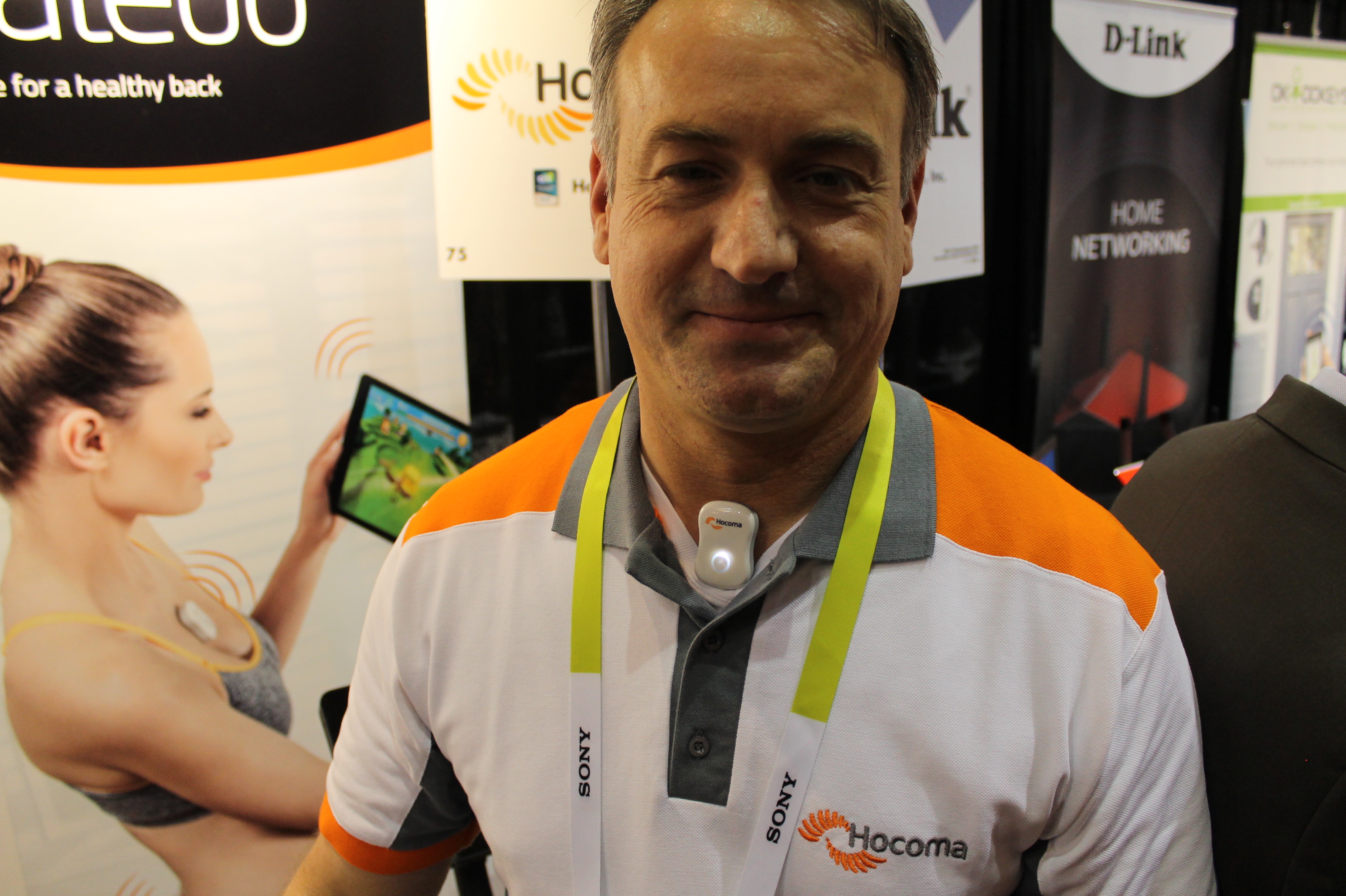 With many wearables being said to be too ugly or bulky to wear and some being abandoned due to forgetting to put them on, adhesive-based wearables may just be the answer. The question is, are we comfortable with sticking sensors on our skin?