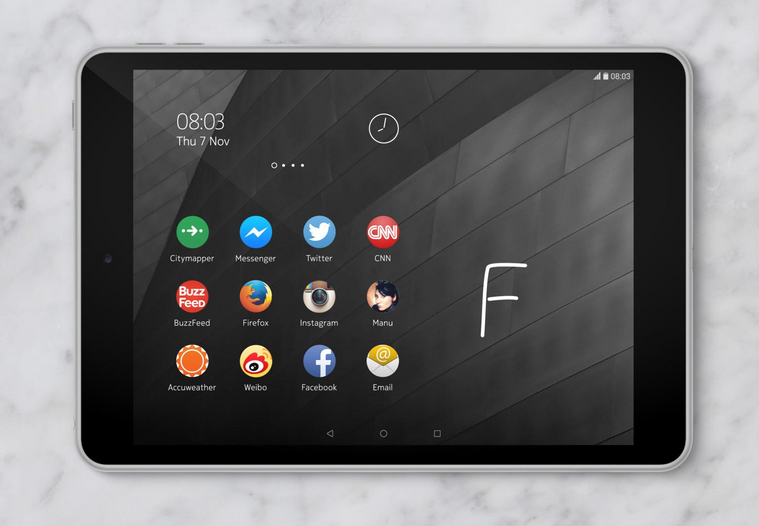 Nokia recently revealed plans to put its name on new devices before the end of the year and now we’re getting our first taste of the company post-Microsoft. Espoo-based Nokia today announced the N1, its first Android tablet.

Though we’ve seen Android-powered Nokia devices before, the N1 is a little more recognizable as Android, despite the custom software overlaid on top. Rather than build a Windows Phone-like experience on an Android base, the N1 runs Lollipop with Nokia’s own launcher.

Aside from the Nokia logo, the tablet features a laminated 2048 x 1536 pixel 7.9-inch display and is based on a 64-bit quad-core Atom processor clocked to 2.4 GHz, along with 2GB of RAM and 32GB of storage. There’s also a 5MP camera in the front, an 8MP camera in the back, and dual speakers. Perhaps most notably, the N1 uses a reversible USB Type C port. The N1 runs Android 5.0 Lollipop with the aforementioned Nokia Z Launcher on top. This is all wrapped up in a pretty aluminum package that measures just 6.9mm thick.

Nokia has made very clear that this is an OEM product with the Nokia name on top. Similarly, it’s licensing the Z Launcher software layer and IP on a running royalty basis to Foxconn, the same company responsible for building some of BlackBerry’s new smartphones.

“The OEM partner is responsible for full business execution, from engineering and sales to customer care, including liabilities and warranty costs, inbound IP and software licensing and contractual agreements with 3rd parties,” Nokia said in a statement today.

The N1 is hitting China in the new year priced at $249 USD, and the tablet will make its way to Russia after that. No word on a North American release but we’re sure Nokia has some more OEM partnerships in the pipeline.

Update: Over the course of the morning there’s been a lot of confusion as to whether or not this tablet has access to Google Play Services. The absence of any of Google’s own apps on the home screen seemed to suggest that it didn’t, and now Nokia has spoken out on the issue. Responding to a Twitter user asking for clarification, Nokia product manager John Kneeland tweeted:

“The N1 is first going to China where Google Play services aren’t an issue. We’ll have more announcements for Europe later!”