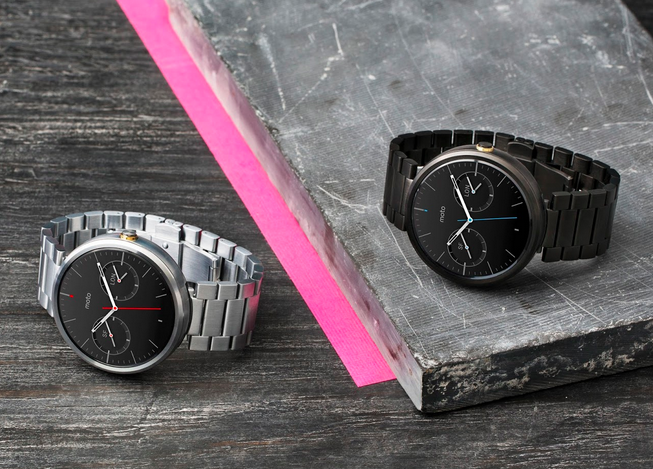 When Motorola officially unveiled the Motorola 360 back in early September, the company showed off a couple of never-seen-before metal options that swapped out the soft touch black leather band for silver or black stainless steel. Unfortunately, the company wasn’t able to talk about availability for those models.

Motorola put us out of our misery this week with an official announcement for the metal Moto 360’s and confirmation of the rumoured champagne gold version that cropped up online last week.  The black and silver metal models are available now in the United States and are priced at $299.

The silver version will be available with a slimmer band later this year for $299. The champagne gold version will be priced a little higher at $329 and will also be available with a narrower band in time for the holidays. Motorola also confirmed the dark brown leather band that showed up on Amazon around the same time as the champagne gold model.

Unfortunately, Canadians are being left out in the cold for now. According to a statement from Motorola offered little insight as to when these new band options for the Moto 360 will arrive in Canada.

“We look forward to bringing more variations of Moto 360 to Canada in the future, but have nothing to share at this time.”

In other Moto 360 news, Motorola has released some software updates for the 360s that are already out there. These include increased customization for watch faces as well as Moto Body, a health app that collects data on steps, heart rate and calories burned and provides goals based on that information. This is rolling out as an update to the Motorola Connect app.