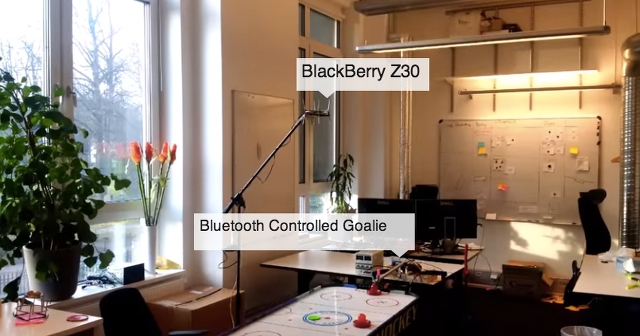 The Astonishing Tribe, now called BlackBerry Sweden (TAT), is well-known for its inventive mobile technology and design demos. Of course, TAT also knows how to have a little fun when it’s not presenting new UX paradigms. Such was the case one weekend this spring, when BlackBerry Sweden employee Stephen Lau took it upon himself to turn a BlackBerry Z30 into an air hockey champion as part of the company’s 2014 hackathon, using an Arduino board, an old BMW windshield motor, and some help from the GitHub community.

“The physical setup for the project was fairly simple. I found a microphone stand from our music room upstairs and mounted the device above the table. From this vantage point, the BlackBerry Z30’s front facing camera has a view of about 85% of the air hockey table. Another engineer from Malmö and I repurposed the BMW’s windshield motor to be the “goalie.” The windshield motor is hooked to an Arduino with a Bluetooth shield and a relay shield. To ensure that the BlackBerry Z30 was doing all the work, the Arduino is simply programmed to turn each relay on or off via Bluetooth. The device does the actual H bridge logic and the position control… The code itself is quite simple. Since I cheated and made the puck green, I was able to greatly simplify my image processing code. Between each frame, the BlackBerry Z30 locates the puck, calculates the puck’s trajectory and then moves the goalie to try and block it.”

The Z30 puts up a pretty decent air hockey game, and I would have loved to see two Z30s compete head to head. For the next hackathon, MobileSyrup suggests a BlackBerry Passport playing ping pong.

Disclosure: I was a BlackBerry employee from 2009-2011. Working with The Astonishing Tribe was one of the best parts of my job.