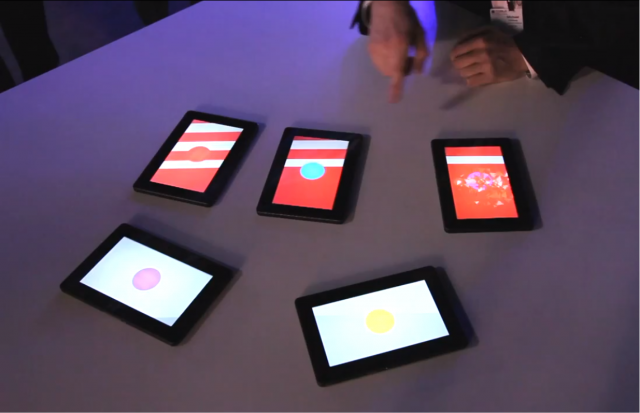 RIM may have not have any new products to announce this year at Mobile World Congress, but they’re showing off some amazing things from a previously-acquired company, The Astonishing Tribe (TAT). The software, which does not currently have a name, allows a ceiling-mounted camera and several Playbooks to collaborate in incredible ways. Not only can the devices detect where they are in proximity to one another, thereby performing certain actions if they get close enough to one another, but you can “fling” actions between tablets.

The gesture-based software also allows for what RIM reps are calling a “power swipe,” whereby three fingers gesturing towards the bottom of the screen will push what’s on the screen — a browser, a presentation, or whatever — onto a connected projector over WiFi. The ‘Cascades’ software also allows you to share single images between connected Playbooks, which is done seamlessly as the camera tracks the position of the devices.

The Astonishing Tribe was purchased in 2010 by RIM to help beautify and improve functionality of the QNX-based Playbook OS, and to improve usability of the upcoming BlackBerry 10 platform. Check out a demo video of the, ahem, astonishing software after the break.

Image: Looks like BlackBerry’s Super Bowl ad will be a colourful explosion

Want to see a BlackBerry Z30 play air hockey? Of course you do