Tab for iPhone takes the Hailo approach to dining out, launches in Toronto 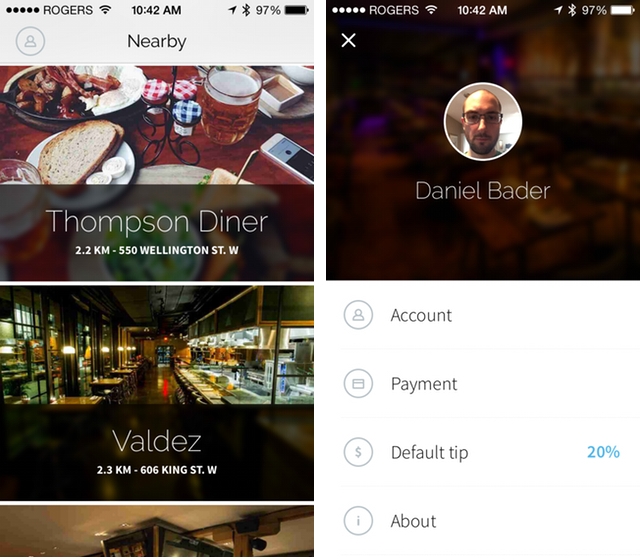 As we’ve covered more than a few times recently, the mobile payment space is permeable, with startups, loyalty companies, carriers and banks all jostling for users’ attention.

There has yet to be a single app or service that completely does away with the notion of a physical wallet, but Tab, launching today in its home city of Toronto, intends to fill that checkbox for some people, some of the time. And that, in my opinion, is a great place to start.

Tab is a lot like the smartphone-oriented taxi services, Hailo and Uber, in that it requires both the user and host, in this case a restaurant, to be using the same back-end. Available today on iPhone, a Tab user opens the app, enters his or her credit card information, and dines at one of the fifteen restaurants currently working with the startup, and leaves without ever taking out a credit card.

All “Pay with Tab” restaurants, most of which are in the bustling King St W neighbourhood, employ an iPad to wirelessly communicate with a Tab customer, allowing them to create an instance within the app. Fellow diners also using the app can join the Tab, which will then be split evenly at the end of the meal.

Tab addresses a pain point for many restaurant-goers today, especially ones that frequent high-traffic locations like the ones on this list. Users don’t have to wait to receive a bill, nor, if they do review an itemized list, wait for a server to bring over a wireless payment terminal. Like the Hailo taxi model, it simultaneously eliminates the tedium of manual credit card processing and the hassle of splitting a large bill with cash. Tab’s ability to automatically apply a tip — customizable per restaurant if the service was particular good, or bad — also eliminates the awkwardness of splitting a bill in two and noticing a companion tips less, or more, than you. You’ll get an email receipt when you’re done, though Tab doesn’t currently itemize the order itself.

Tab’s niche also extends to service: because servers see the names and faces of the clientele, the dining experience becomes more personal, and potentially more enjoyable for everyone involved.

The company was co-founded by former Huddlers CEO, Adam Epstein who, along with Chime co-founder, Fahd Ananata, saw a narrow and exciting avenue in which to explore mobile payments. I had a chance to test the service when Epstein joined me at one of Tab’s launch restaurants, Thompson Diner, one of Toronto’s seminal 24/7 casual dining experiences. Even though I knew what was about to happen, I was taken aback when the server, Jonas, greeted me by name. When the meal was finished, I sheepishly walked out, and as I ambled north towards Queen St., I received a receipt over email. The next time I opened the app, I reviewed the service.

The app itself is beautiful, making excellent use of the iPhone’s vivid display and iOS 7’s translucent, layered app design. Nearby restaurants are highlighted with high-resolution photos, and opening a new Tab is a single tap when you come within its vicinity.

Epstein understands that to launch in a single city with a handful of restaurants severely limits Tab’s reach, but the slow burn to the top is the cornerstone of this type of business model. Unlike merchant processors like Moneris or ubiquitous quick pay companies like PayPal, Tab is uniquely positioned to grow within its niche, and steadily ascend in the restaurant payment environment, which is unlike any other industry. Epstein explains that, like Hailo and Uber, both customers and hosts must enjoy using it, and early feedback, from both me and Jonas, indicates that Tab is on to something big.