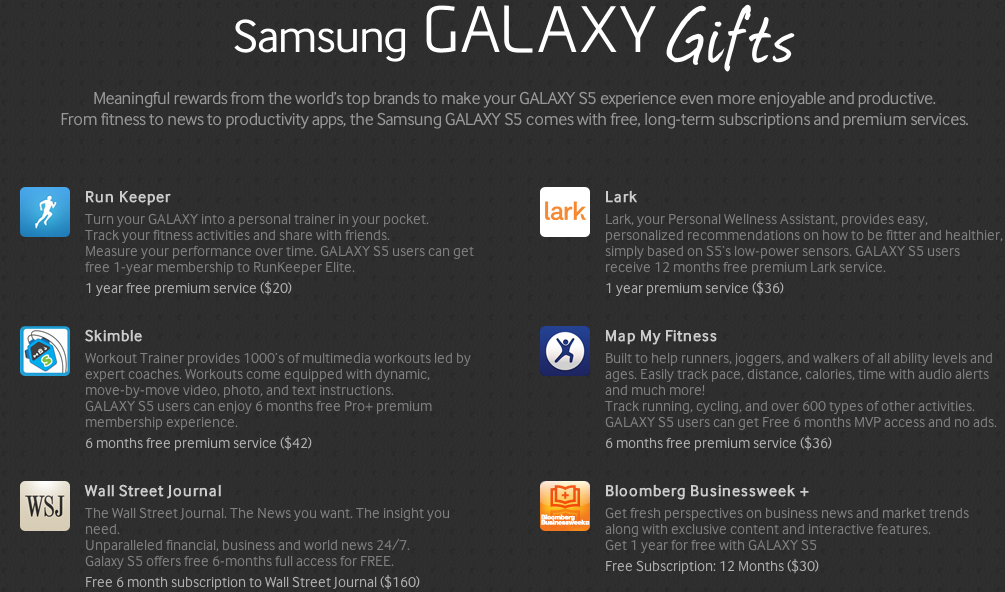 If you’re planning on buying a Galaxy S5 when it comes to town in April, know this: you’re not only getting the Android phone with the biggest marketing muscle in the world behind it, but you’re also being treated to a slew of free software and services that have become standard on high-end Galaxy products.

PC users are often exposed to similar offers when they buy a new Dell or HP: trial versions of McAfee and Photoshop aim to hook users so they’ll renew once the free period ends. The difference between those and Samsung’s “Galaxy Gifts” is the quality of the inclusions: Samsung’s are better, and often very useful.

Case in point: with the GS5, users will get nearly $600 in freebies, including a one-year subscription to Run Keeper Premium, six months of Wall Street Journal access, special offers from PayPal, three-month LinkedIn and Evernote Premium accounts, $10 of Cut The Rope 2 in-app purchases (the game has yet to be released for Android), and lots more. The WSJ offer alone is worth $160, and goes straight to the heart of the demographic at which Samsung is promoting its new flagship.

The full list is available on Samsung’s site, but you can already get many of these freebies when you purchase a new Galaxy TabPRO or NotePRO tablet.

Tell us, do these types of promotions make it more likely to purchase a Galaxy phone over another, or are they just empty calories on the smartphone cake?