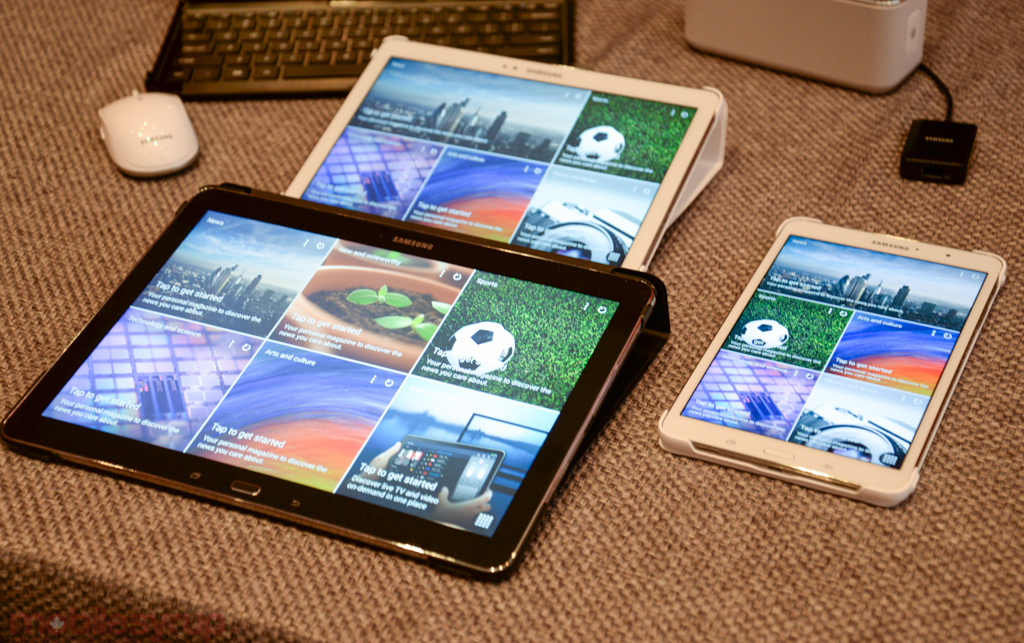 This morning, during a small briefing in Toronto, I had a chance to play with four new tablets from Samsung. Each is alike yet separate, a consequence of a “device democracy” policy set in place by the powers that be.

With its enormous size and manufacturing capabilities, Samsung has managed to carve out a substantial section of the horizontal mobile share very quickly, rising from a squeak in the mid-2000’s to the best-selling smartphone manufacturer today. It has been able to do that by catering not just to one, or even a handful, of demographics, but to every possible smartphone or tablet customer out there. What started from a single Galaxy Tab in 2010 has grown to a suite of names, screen sizes and capabilities, ranging from a $169 7-inch tab at the bottom to a gargantuan $769 12.2-inches at the top. 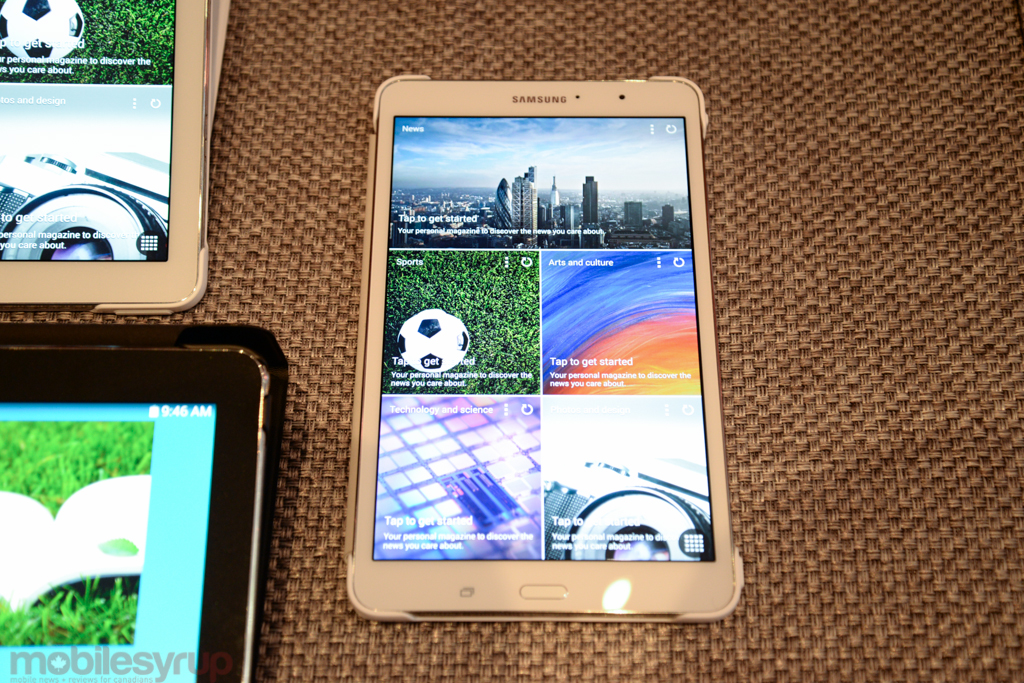 More recently at CES, Samsung introduced four new Galaxy tablets, ranging in screen size from 8.4 to 12.2-inches. But what’s interesting aren’t necessarily the differences, but that they are all so similar. The three Galaxy TabPRO and single Galaxy NotePRO slates differ only in size, and moderately in specs; they are otherwise functionally identical. With Magazine UX, a new homescreen configuration built into the launcher, all of the content has been shaped in a large grid of widgets that adjust to portrait or landscape. Many of them enter apps that have either been specifically designed for the Galaxy PRO series, or are being subsidized through your purchase; new users get a free year of Evernote Premium, for example, along with a 3-month subscription to NextIssue, a Netflix-like service for magazines.

At their cores, however, all are capable Android tablets with extremely modern specs and gorgeous screen resolutions of 2560×1600 pixels. Yes, the 8.4-inch and 12.2 variants share the same resolution, which may have been a problem if the latter’s quality was even remotely diminished. Fortunately for all involved, that’s not the case: the 12.2-inch model still has a commendable 247ppi pixel density, while the $419 8.4-inch model stands at a ridiculous 368ppi. The Tab and NotePRO 12.2’s also have slightly more RAM, 3GB compared to 2GB, than the 8.4 and 10.1, but the overall performance should be largely identical. 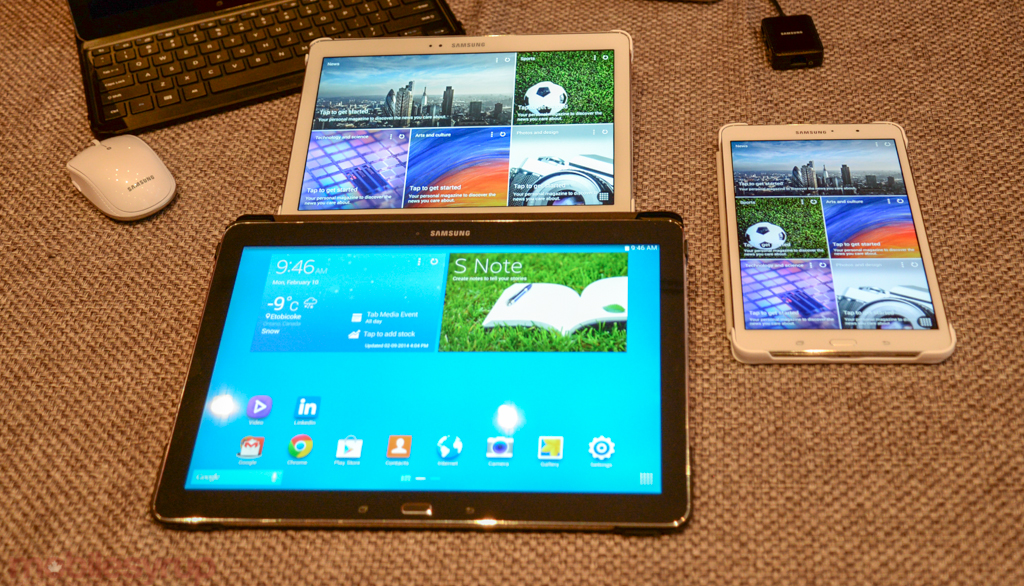 Obviously, with the smallest version being the sharpest, it’s obviously going to be the most desirable, right? Well, unlike the previous generation of Galaxy Tabs, where the Tab 3 8.0 was head and tails ahead of its more expensive 10.1-inch counterpart in terms of usability, clarity and value, the 10.1-inch and 12.2-inch models have distinct software advantages here.

TouchWIZ has been moulded to attempt to recreate as much the experience of using a desktop OS as possible. Namely, four apps can be opened, and information shared between, at the same time. While it’s clear that Android has not been designed this way — drag and drop capabilities continue to feel more a hack than feature — it absolutely work, most of the time. On the massive 12.2-inch model, Samsung expanded the canvas to a point where having four apps open at once does not feel crammed, or even remotely uncomfortable. During the demo, we used Chrome, scrolled through Twitter, perused a spreadsheet and watched a movie trailer at the same time. It was functional; it was fun.

Though prohibitively expensive, at $769, the Galaxy NotePRO 12.2, considered the king of the pack, is a remarkable workhorse, and the closest thing to a laptop replacement (with the optional keyboard dock and optical mouse, of course) as you’ll find in the Android ecosystem. Of course, that comes with a price: the keyboard dock, at $129.99, and the mouse (at $39.99, but any cheap Bluetooth mouse will do) will set you back over $1,000. And though it’s thin and light for its size, that’s still 750 grams — nearly twice the iPad Air — and not the most portable of products. To put it in perspective, the 12.2-inch Galaxy TabPRO is nearly the same size as a 13.3-inch MacBook Air. And, just like a MacBook Air, the larger tab feels very strange when used in portrait mode. 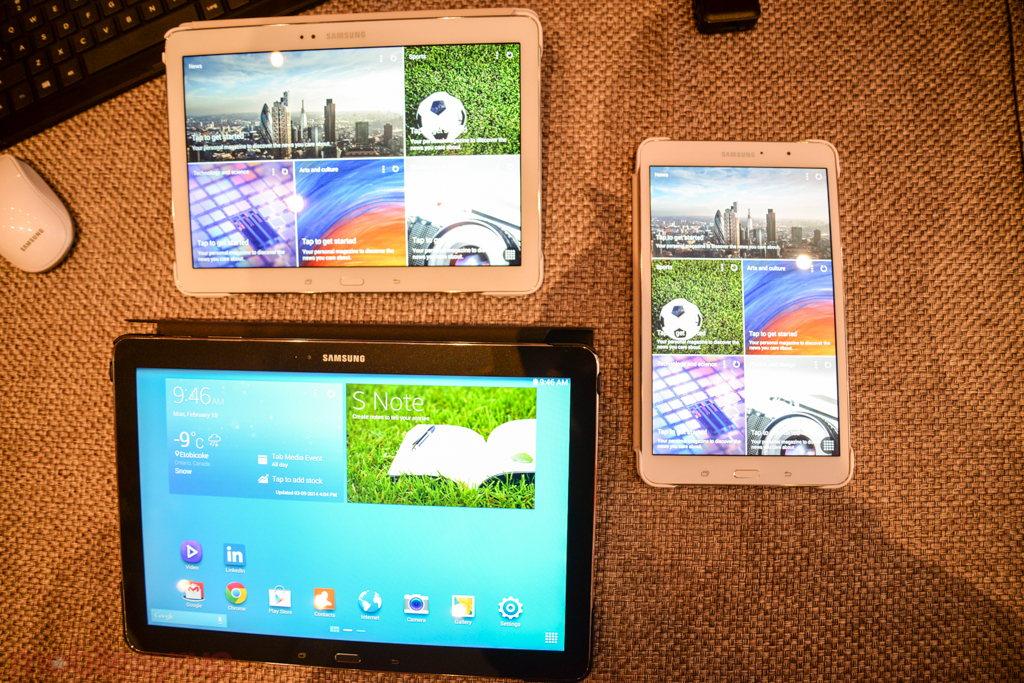 Samsung isn’t just going after the consumer here, either. Its KNOX Security suite has been optimized for these tablets, and each user gets a free version of the Hancom Office suite, a series of apps that offer, according to Samsung, “85-90% of Microsoft’s Office suite.” Of course, one must enter Samsung Apps, the company’s proprietary content hub. Also included is e-Meeting, a first party meeting and slide-sharing app, along with Cisco’s WebEx and a number of other cubicle-friendly brands.

It’s unclear whether the public will stomach these high prices for individual products, but Samsung’s office push speaks to the virtues of BYOD and corporate VPNs. At $419, the Galaxy TabPRO 8.4 is likely to be the most looked-at, but the $519 TabPRO 10.1 will be the sweet spot. Both of these, along with the $769 NotePRO 12.2, will be available at the end of February. Those looking for the S Pen-free TabPRO 10.1 will have to hold out until March.

We’ll have a full review of the entire series, beginning with the NotePRO 12.2, in the coming weeks.