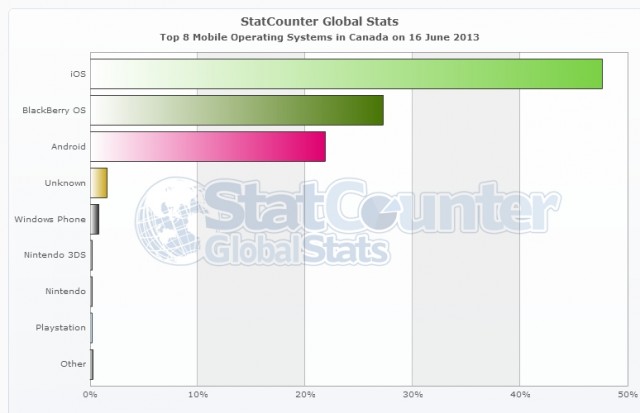 BlackBerry will be reporting their first quarter fiscal 2014 results on June 28th and the numbers might be better than one expects. A few analysts chimed in last week and estimated that BlackBerry could declare quarterly BlackBerry 10 sales of 5 million units. This potential increase was spurred on by the introduction of the BlackBerry Z10 and BlackBerry Q10 in the United States and other countries. Canada had a jump start and saw the Z10 launch in February, then the Q10 in May.

Another indication of improved sales is coming from tracking service StatCounter. SeekingAlpha pulled a report dated June 16th that showed BlackBerry having a mobile OS market share in Canada close to 30%, beating out Google’s Android OS (21%). The only stat that we can compare this to was from May when research firm Raymond James claimed BlackBerry’s market share was a measly 13.5%.

Of course we’ll to wait a couple weeks until the real numbers come out. Perhaps Mike Lazaridis, founder of BlackBerry (RIM), was correct when he stated BlackBerry is “back in a big way with BB10.”