You Don’t Know Jack launches on Android after extended delay 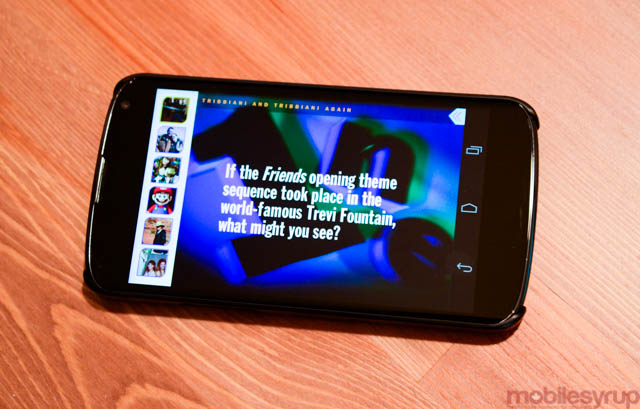 After what seems like a brand-nullifying wait, the once-terrific You Don’t Know Jack has launched on Android. Arriving on iOS in December, with an Android release promised in the coming days or weeks, it has taken six months for the game to be successfully ported. Is the sojourn worth it? In many ways, no.

You Don’t Know Jack was the king of trivia games in the 90’s, a lean-back local multiplayer game where friends hovered their fingers tautly over keyboard keys with the intent of “screwing”, “Dis or Dat”-ing or “Jack Attack”-ing one another in extended battles of irreverent trivia.

The dynamics themselves have not changed much, from the initial Facebook port to iOS and now Android: the questions are still pop culture-infused gems, recited by a fantastic host with a dirty mouth. The key differences revolve around payments: the core game is free to play, but users can only freely play once a day. Scoring high nets a modicum of coins; spamming your friends about the game nets you more. Every game costs 200 coins to play, so you will either have to rise to astronomical heights or, more likely, pay for a set of coins. One thousand coins, the equivalent of five games, costs two dollars. That’s not a terribly high sum considering the amount of fun you have in every eight-minute stretch of gameplay, but it’s still quite steep.

Of course, today we have so many ways to fill our precious time, one daily game may be more than enough to whet the palate. But the game’s constant insistence on spamming your Facebook friends (you must log in through Facebook if you want to play against people you know, otherwise it’s all random) with invites, or posting your scores to your wall, or using coins to listen to fake sponsors… it all gets tiresome quickly.

There is a great game with amazing content inside YDKJ for Android, you just have to wade through the trough to find it. The game also appears to be quite buggy at the moment, and does not work on a number of mainstream devices like the HTC One. Jellyvision says it’s working out the kinks as we speak, though, so stay tuned for updates.