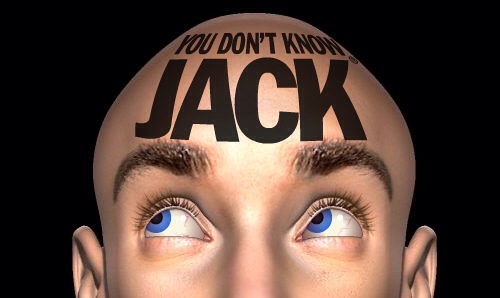 You Don’t Know Jack was the Mario Party of its day. Before the days of high-speed internet, the game managed to keep users huddled around small CRT monitors answering Gibberish Questions and ‘Dis or ‘Dats well into the night. There was Cookie, the long-suffering wise-talking host, and a series of crude, brilliant questions coupled with awesome graphics (for its time).

It was inevitable, then, that creator Jellyvision would bring it to mobile platforms like iOS and Android. Originally announced over a year and a half ago, the iOS version is launching “in the very near future,” according to the game’s Facebook page. The Android version is currently in testing, and the company is asking for volunteers to make sure it’s working well across devices.

The game, when it comes to Android, will be available for phones and tablets. We’re assuming, since there is mention of tokens as currency, that it will be a free-to-play title, with bonuses and “screws” costing real money.

You can check out all the details on the game’s website.