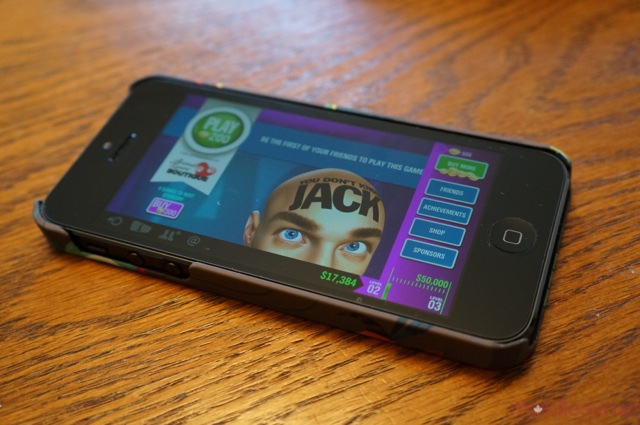 You Don’t Know Jack has come to iOS, and it’s a great game. Well, scratch that — YDKJ came to iOS in April as a paid app, but was quickly scrapped in favour of a cross-platform free-to-play version.

The one Jellyvision released this week gives you one free play per day, which can be augmented by purchasing tokens for real money. A new game costs 200 coins, and you can buy blocks of tokens for continued enjoyment. $1.99 nets you 1000 tokens, or five plays; $16.99 gets you 10,000 tokens, or fifty plays. There are 200 “rounds” in this initial version, with more content promised down the line. Each game consists of five questions, including one “Jack Attack” round.

The game itself is a lot of fun, with crude, censor-pushing content (for an iOS game) and cute, interactive graphics. But the in-app purchase nature of the game — everything costs tokens, from the fake “sponsors” to score-enhancing bonuses — takes a lot of the enjoyment out of it. It’s hard to call it free-to-play when you’re locked out of the fun after one daily round.

But the content trumps many of the other finicky details, and I’d have no problem putting $20 towards playing this game daily for 50 days. There are other ways to earn tokens, obviously — higher scores and whatnot — and you are able to compete against random opponents or with Facebook friends.

If you have an iOS device and want to try something a little different, download You Don’t Know Jack. An Android version is coming very soon.