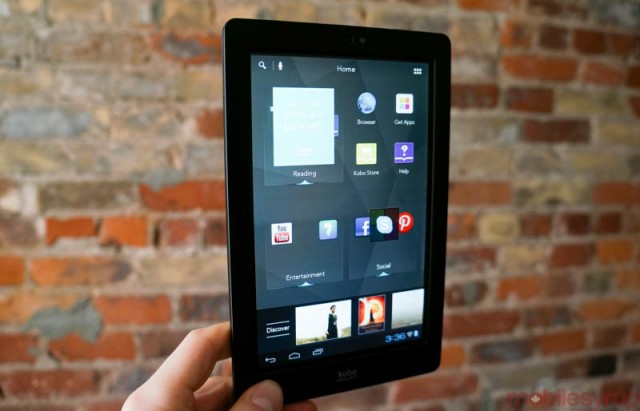 One of the first truly negative experiences I had with an Android tablet was with the Kobo Vox. Rushed to market in an attempt to prevent the marketshare onslaught of the Kindle Fire, and to perhaps convince Canadians that the company was in the same league, it lacked the hardware polish and software content to truly compete.

The Kobo Arc, released just a year after the Vox, is a remarkable and truly stunning recovery for the bookseller. Once a division of Chapters Indigo, the company was sold to Japanese e-retail giant Rakuten in late 2011, and Indigo now operates as the de facto Canadian headquarters for the ever-expanding entity. 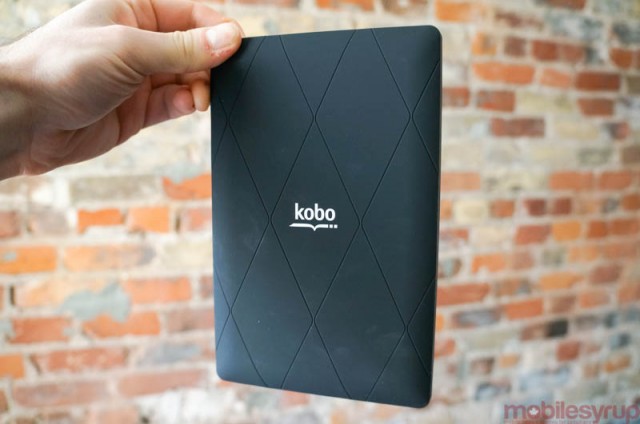 The Kobo Arc is a compact 7-inch tablet, similar in design to its recent Glo and Mini E-Readers. With a quilted backing made famous by the company’s first reading devices, the product is far less nondescript than the average small slate.

It also runs a slightly-modified version of Android 4.0.4 which has access to Kobo’s full library of books, Zinio’s magazine portal, as well as Google’s Play Store and its own array of apps, movies, books and more. 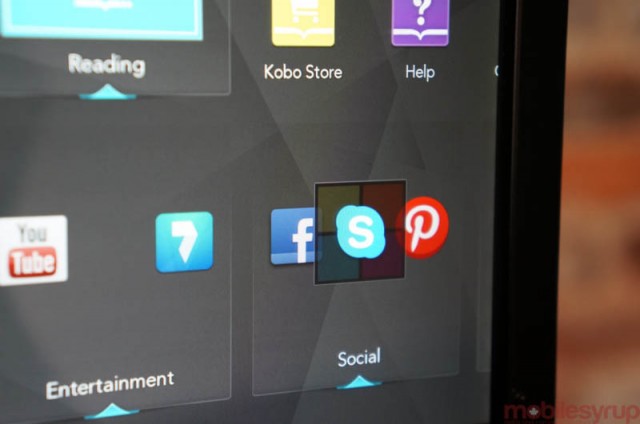 The Kobo Arc is a winning combination of form and function. It’s light, but feels far more robust than the Nexus 7. It’s narrower than the equivalent Kindle Fire HD and can easily be held in between the thumb and forefinger from one edge of the bezel. Its replaceable quilted backing is not only comfortable but attractive, though it does attract fingerprints more easily than the Nexus 7.

The screen boasts the same resolution as its main competitors, but offers superior colour reproduction, viewing angles and overall readability than Google’s tablet (I can’t comment on the Fire HD as I haven’t spent enough time with one). Though it runs a relatively old version of Android — Kobo says it will be releasing a boost to Android 4.1 Jelly Bean in the near future — its performance is on par with Nvidia’s Tegra 3 chip. Games, streaming movies, surfing the web, were all free from slowdown, and the relatively new processor decodes 1080p video with ease.

The front-facing stereo speakers sound good for a tablet, but still relatively shrill and sibilant at high volumes. Sound from the headphone jack sounds better, and because the screen is relatively sharp the Arc is a great companion for movies and YouTube clips. 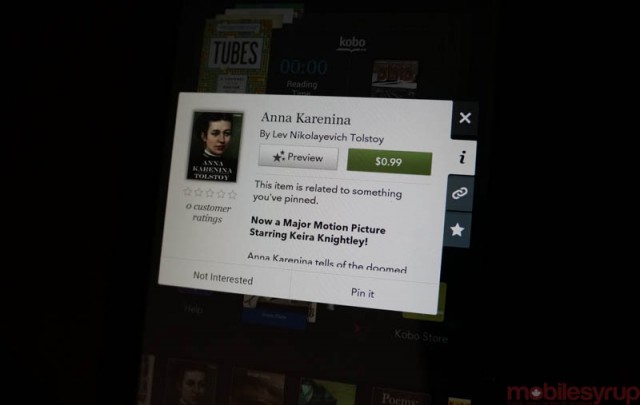 Kobo was thoughtful in its software design, too, straying just far enough from the stock Android experience to help us appreciate its nuances. For example, the launcher incorporates what I like to call Folders Plus (which are actually called Tapestries) allows not only apps but full-sized widgets into areas delineated by category. Some of the default ones — Social, Entertainment, etc. — are pre-populated with apps that I actually use. The tablet comes with Facebook, Twitter, Pinterest pre-installed, and there were very few additions I wish were absent. The Arc is mercifully ad-free, too, something that Kindle Fire HD users must pay extra for.

Kobo’s “Tapestries” UI includes a Discovery menu on the bottom that rotates through content it thinks, based on your reading and searching history, you’d like to consume. This, of course, assumes you have a Kobo account populated with several books, but the feature works really well for the most part. The company’s reading app could use a little polish — there are no page turn animations, for example, and the typography choices are slim — but overall all the features you’d expect are there. Its social media integration, called Pulse, is effective, as is the gamification of your literary achievements, called Reading Life: read a book after dark, for example, and you’re awarded the Night Owl badge, for instance.

The device not only performs well but its battery life is top-notch. I was easily able to obtain 10 hours of general use per charge, and using the device mainly as an E-Reader — brightness set to low and Airplane Mode turned on — I had uptime of more than a week on one charge.

Because the Arc has access to Google’s Play Store, it is much less limited in its app scope than the Kindle Fire, though it is limited somewhat by its older software. There are no expandable notifications, for instance, and you lose out on the lock screen widgets of Android 4.2, which comes standard on the Nexus 7.

The Arc is mainly a great E-Reader. The Kobo app syncs between devices, so you’re always up to date wherever you go. If you download a book on your Kobo Glo or through the web, for instance, it will be available immediately on the tablet. You can import ePub books that you purchased elsewhere — as long as they don’t contain any DRM (digital rights management) — and there are a number of ways to read your books, including an excellent Night Mode. 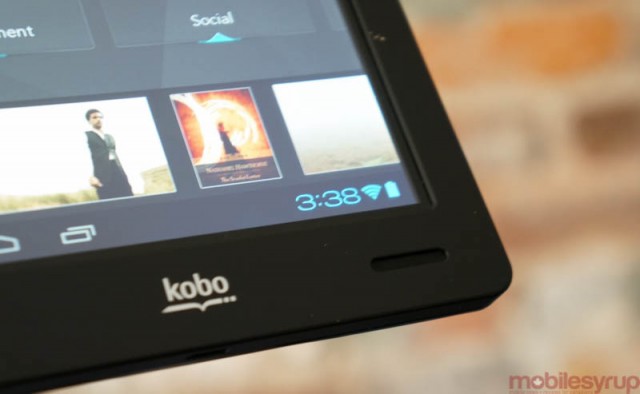 For all its posturing as an E-Reader, the Kobo Arc is a 7-inch Android tablet with a nice skin. There is nothing you can do on the Arc that wouldn’t be possible by downloading the freely-available Kobo app from Google Play — say on your Nexus 7 — and taking advantage of its robust recommendation system and social reading benefits.

And while the Tapestries UI is interesting, it is still mainly a launcher replacement; Kobo doesn’t try to go deeper than that. Delving into the tablet’s settings expose a familiar barrage of complicated knobs and buttons that may vex the average user.

Kobo also doesn’t come close to Google or Amazon as a content provider; aside from books, the company is without a means of providing sufficient value to their customers. Magazines are purchased through Zinio; songs through 7Digital; movies through CinemaNow; apps through Google Play. Kobo does have a fantastic assortment of books and graphic novels to choose from, and prices are often better than the Amazon equivalent, but at the end of the day there is nothing available on the Arc that isn’t on the Nexus 7. OS-level integration with these apps is minimal: you occasionally get music recommendations that appear in the Discover bar, but the majority of them are books that would otherwise be available when downloading the Kobo app itself. 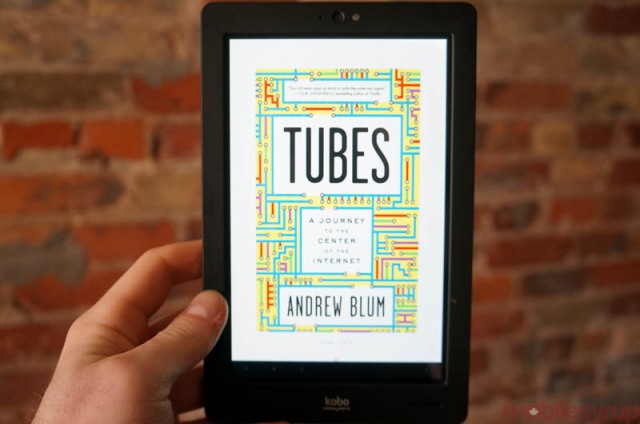 Should I Get It?

That depends on what you need. The Arc is a great 7-inch tablet, better in many respects than the Nexus 7. It has a sharper display, superior speakers, higher build quality and a cheaper price. What it doesn’t have is Google’s ongoing support, so newer versions of the software will still be behind what you’d find on a Nexus device.

There are plenty of accessories for the Arc, including interchangeable backs and custom cases and sleeves. This amounts to plenty of customization opportunities and excellent gift options, something that Kobo is pushing very hard with this tablet.

At $199 for the 16GB model, $249 for the 32GB and $299 for the 64GB model, there is tremendous value to be had. It’s cheaper than the Nexus 7 and equivalent 7-inch tablets in the first two configurations, but it’s the 64GB model that has me most intrigued. For less than $300 you have enough storage to keep all your favourite books, movies, music and files in one spot.

The Arc is a fantastic little tablet, and a testament to the strength of the Kobo name. The company is quickly becoming competitive with companies that have been doing hardware for years, and have struck the perfect balance between custom software and Google’s own strengths. It’s not perfect, but it’s extremely close for the price.

The Kobo Arc is available from Indigo in both black and white for between $199 and $299. 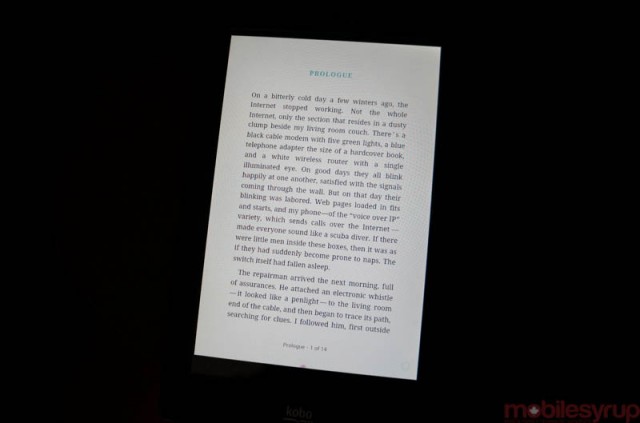 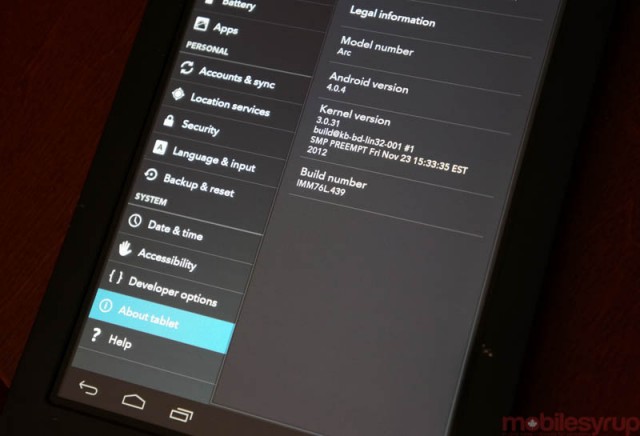 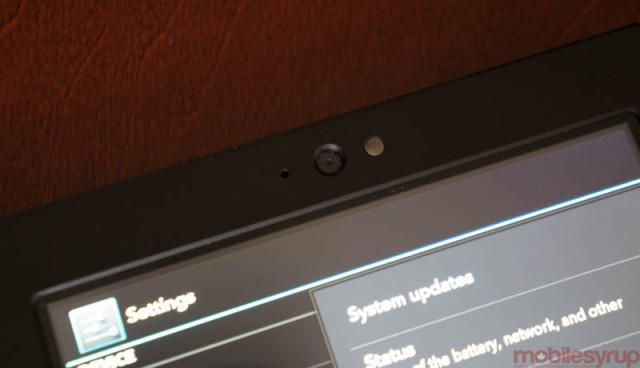