Kobo Vox Hands-on: a cheap tablet in more ways than one (Video) 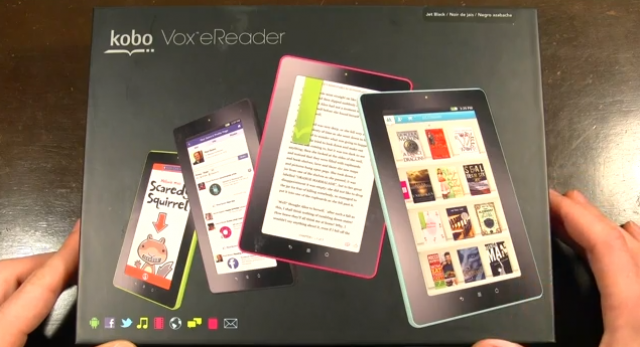 How does a $200 Android tablet sound? Well, we tend to tread lightly around the topic — there is a lot of junk out there — but when a venerable company like Kobo (owned by Indigo Books), whose products we already love, announce a tablet in the guise of an eBook reader, we jumped all over that. And better yet, since it’s meant to compete with the Kindle Fires and Nook Colors of the world, it has to be at least competitive, right? Right?!

We eagerly purchased the $199 Kobo Vox today, in black trim and attractive box, only to be severely disappointed. Before we get into it, let’s discuss specs: the tablet houses an 800Mhz Cortex A8 processor, either 384MB RAM, 8GB internal storage, along with WiFi connectivity. No camera(s), no Bluetooth. No nonsense. So far, so good. Sure, it’s not a top-of-the-line spec sheet, but it’s meant to be used as an eReader and for the occasional browsing spell. So why was I left with such a bad taste in my mouth? Read on to find out.

The hardware is the first indication that the Vox is a haphazardly thrown-together product (quite literally). The 7″ screen claims to be an AFFS+ panel with excellent brightness, sharpness and viewing angles. While true in some sense, the screen is clearly inferior to that BlackBerry Playbook, with abysmal black levels and colour saturation. Text, while adequately sharp, is aliased and contrast is poor. Viewing angles are quite good, though, as is maximum brightness.

Build quality is, in a word, terrible. The body is plasticky in the worst way: it feels like a child’s toy. The mainstay quilted Kobo back, a welcome addition to their E-Ink eReaders, appears to be glued on here; my device actually came with one corner peeling off, exposing the adhesive underneath. It was also misaligned, making for a jarring transition between back cover and plastic body. The top of the device houses a power button, and to its right a notch for a single tinny speaker. On the bottom are the 3.5mm headphone jack and microUSB port which allows charging, thankfully. On the left of the Vox is a volume rocker that I can only describe as willful: it is a sticky, stubborn thing.

Upon first turning on the device I was greeted with a Welcome screen. A nice image was surrounded by a YouTube-esque video bezel, a pleasant “play” button in the middle. It indeed played a short clip of the Vox’s features. Once returned to the beginning, I attempted to press the “Get Started” button beneath it, only to be whisked back into the clip. Again, I tried; once more I watched the damn clip. For the life of me, I thought I had lost my mind. Turns out the screen was not registering my presses at all. Actually, that’s not true. Turns out the alignment was so off that half the screen was just not working, including the part that housed the “Get Started” button. I ignominiously rebooted the machine, and magically touch returned to the screen.

After “Getting Started” and entering my WiFi password, I was told there was an important firmware update for the device. I assented (there was no denying Vox) and waited. And waited. Fifteen minutes later, the download completed, and the device rebooted, only to have me wait another ten minutes for it to install. Half an hour after ripping the plastic off the box I had still not seen a single usable feature.

Eventually I got through the tumult. The device automatically launches the Kobo software (you DO have a Kobo account already, don’t you?) and proceeds to download your previous books. I had around 13 purchased novels, and the Vox automatically downloads three “Full Colour” selections: a Franklin book for kids (I thought someone was playing a prank on me), Lonely Planet’s Europe Essentials, and Sweet Dreams Desserts, a Kobo Cooking Exclusive (yay?). The app is identical to the Android version — it should be, the Vox runs on Android 2.3.3 — and it’s a very capable eBook reader. This is really where the device shines, since it aptly displays your purchases on a 3D shelf, allows for numerous customizations including typeface and font size. But, like the rest of the device, the Kobo app itself is plagued with slowdown. <sarcasm> The processor inside the Vox is clearly not able to keep up with the complex shadows and high-quality textures that are required to display a virtual bookshelf </sarcasm>

The act of reading is pretty good, though there are no animations to show that you have changed pages. You can share your progress on Facebook with the Reading Life service or, with Kobo Pulse, keep in touch with other users reading the same book as you. You can annotate and bookmark, and purchase from within the app. All these things work, just as they do on any other platform.

And what platform is this? Well, it’s Android 2.3.3. See, the Kobo Vox, unlike the upcoming Kindle Fire or Nook Color, wastes no pretence on covering up its Android roots. Once you press the Home button on the bottom of the device, you are whisked to a stock Android launcher (but for the permanent Kobo app shortcuts). You will notice familiar apps such as Browser, Gmail, Facebook and Twitter. Except that the browser is the only actual app of the four: the rest are links to the web versions of their respective services. You see, the Vox was not certified by Google to carry its app bundle, so no Gmail and no Android Marketplace. Instead the role of app store is filled by a web link to GetJar, which, to be fair, is pretty well stocked but lacks the speed and variety of the official version. On the plus side, you get the stock Gingerbread music player, email client, gallery, calendar, calculator, clock and, as mentioned, the browser. Curiously Kobo has bundled the Rdio music app, too, along with Scrabble Free, Press Reader, Zinio and Globe2Go ePaper. You even get bloatware to round out your true Android experience.

As for the performance, I saved the best for last. Not only is the screen basically unusable — I had to press down on icons like in the old resistive days — but my device had severe backlight bleeding on portions of the screen. The tablet stutters along, performing its simple tasks with the kind of painful wheezing that is usually reserved for emphysema patients. Forget watching movies — at least nothing more than standard YouTube fare — and though the battery is meant to last six hours, we found it depleted much faster when doing anything other than reading books on low brightness.

Did I mention that the screen turns on at random times? Or that almost every app I opened crashed at some point? Really, it doesn’t matter because at some point you just have to say, how cheap is too cheap? Is it worth putting yourself through some aches and pains for an eReading experience that you can get from an E-ink device for half the price? Or what if you do in fact want the full-colour tablet experience? Either wait for the Kindle Fire to come to Canada — which may be never — or, spend the extra $100 and buy yourself a $299 BlackBerry Playbook. It has a very capable Kobo app that is almost identical in functionality to the Android version, and it performs infinitely more smoothly. Don’t buy this tablet for its “Android” experience. In fact, don’t buy this at all. I love Kobo — I have spent more money on books than I did on the Vox — but it’s clearly a case where the blade is dull and the razor old and rusted.

In Summary: the Kobo Vox is a colour eReader that doubles as a cheap Android tablet. Except it struggles to do both. Stay far away from this product.