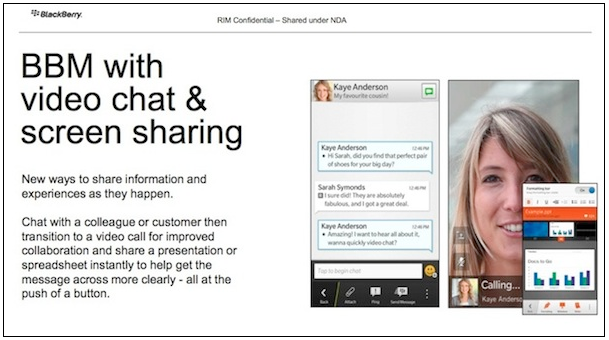 RIM recently launched their BBM Voice service that gives BBM (BlackBerry Messenger) users the ability to make free calls with each other over a Wi-Fi signal. Next, but still unconfirmed by RIM, is the inclusion of BBM Video within BlackBerry 10 OS. This is expected to give BBM users a further option to connect with each other and is reportedly similar to Skype, or Facetime.

A leaked internal doc has appeared online that gives a greater insight into the upcoming service. According to a post on CrackBerry, RIM will launch BBM Video and will allow BBM users to “chat with a colleague or customer then transition to a video call for improved collaboration and share a presentation or spreadsheet instantly to help get the message across more clearly – all at the push of a button.”

Taking a look at the screenshots shows how BBM Video will possibly look – the person you’re calling taking up majority of the display, with your image on the bottom left. Of course, every new feature within BB10 will be unveiled on January 30th, 2013.