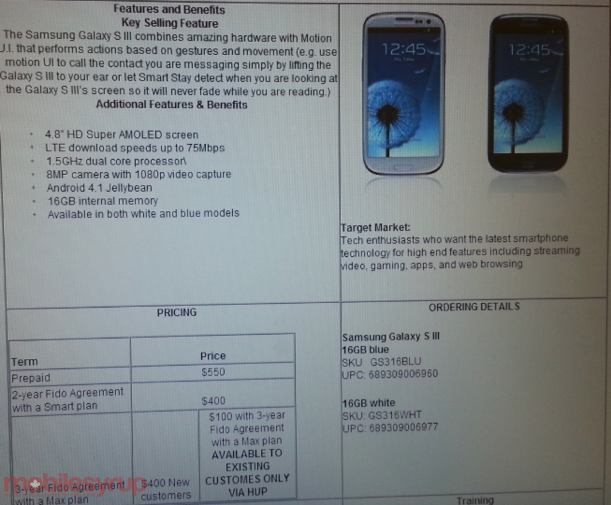 The product tag that we posted earlier this week that pointed towards Fido scoring the Samsung Galaxy S III appears to be true. We’ve now received new details with complete pricing for this LTE-enabled Android. They’ll only be offering up the 16GB version, but will be available in both pebble blue and marble white. As for pricing, the outright/pre-paid cost will be a respectable $550, but the 2-year and 3-year plan for new customers steep at $400. However, if you’re an existing customer who wants to upgrade then you’ll be able to grab the GS III for $100.

According to the internal doc we received it states in the FAQ that the reason for the GS III to be priced a bit higher on a contract than other smartphones is because “Fido customers on a 2-year Fido Agreement on the $56 promo plan will have completely paid off their device after two years and earned FidoDOLLARS towards a new smartphone while a Koodo customer on a $56 plan will still owe $16 on their tab-type contract.”

Look for this to launch on Fido this coming Wednesday (December 19th).
(Thanks tipster!)