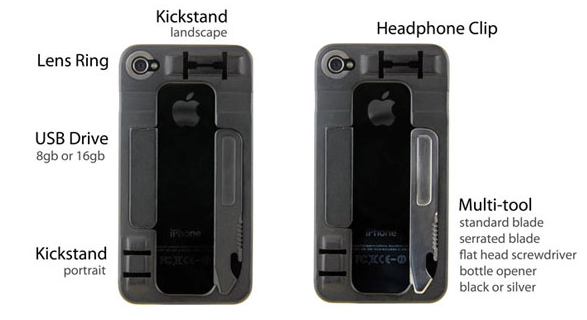 If MacGyver was still with us today (best show ever!) and sported an iPhone*, he would use a ReadyCase.

The company behind the ReadyCase is funding the project on Kickstarter competitor Indiegogo, and has already raised over $80,000. The idea is pretty simple: how do you cram as much stuff into an iPhone case as possible. this includes a USB drive that doubles as a kickstand, a multi-tool blade/screwdriver/bottle opener, a lens ring and multiple lens attachments including wide-angle, fisheye and more, and a handy headphone clip to ensure fewer tanglies in the backpack.

In other words, ReadyClip, for $40, brings a lot of functionality for nearly the same price as some regular cases. Now this doesn’t necessarily mean they’re all high quality features; I’ll direct your attention to every bargain-basement “multi-function tool” you can buy for $10 at Sharper Image, but the ReadyCase does look pretty funky.

If you preorder the case through Indiegogo, you’ll get an iPhone 4/S and an iPhone 5 Case, plus either a 8 or 16GB USB drive. For an extra $10 you get a lens kit as well. The case itself adds only 3mm to the device, so the iPhone 5 ends up being just thicker than an iPhone 4. Not bad!

The product will ship, at the earliest, by February, so you’re not going to get value for your money until your fingers are nearly frozen off by winter’s grip, but it’s something to look forward to.

Check out ReadyCase for iPhone at Indiegogo.

*A lot of people will retort by saying, “MacGyver would never use an iPhone! Android all the way!” Noted.