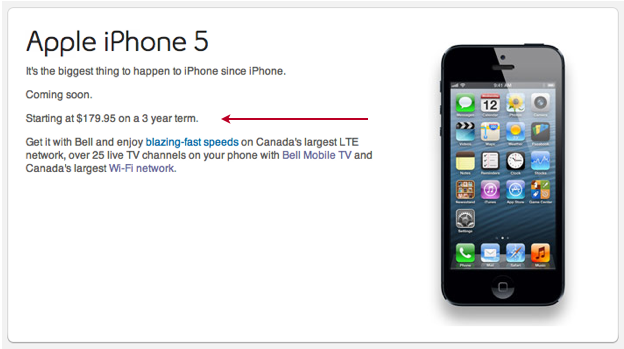 Here it is, folks. The pricing for the upcoming iPhone 5 has been released, and it’s a bit more expensive than the 4 and 4S were when they were released in July 2010 and October 2011 respectively.

The 16GB iPhone 5 will start at $179.99 on a 3-year term. That’s a $20 increase from the previous years, and can either be attributed to inflation (because it sure isn’t the weak Canadian dollar) or higher costs at Apple.

Bell’s contract pricing on a 3-year term, assuming the same formula applies this year as last, is as follows.

We only have confirmation of the 16GB price at the moment. But that’s a lot of money to spend on a phone when signing a 3-year contract. Note that the iPhone 5 is $50 more expensive for each model when purchased outright from Apple as well.

What do you think? Is the higher price going to affect your decision to purchase the iPhone 5?

Update: For those interested in HD Voice, we’ve received an internal Bell doc that says “The iPhone 5 is also HD Voice capable and Bell is the only nationwide carrier in Canada to offer HD Voice which provides the clearest call quality available.” – IH

Update #2: TELUS sent us an email regarding HD Voice: “We now support HD Voice on the TELUS network with the iPhone 5 being our first HD Voice enabled device.” – IH