Along with the announcement of the new version of Windows Phone, Microsoft was very happy to announce that it has broached the 100,000 apps mark in the Marketplace. This is an incredible achievement for a number of reasons, particularly because the OS has only been around since October 2010. More imporatntly, however, the announcement was mirrored by what the future of Windows Phone holds: games and apps from noted developers Zynga and Gameloft, plus a number of Nokia-specific additions that will take advantage of the new hardware abilities inside Windows Phone 8 devices.

Firstly, Words with Friends and Draw Something are officially coming to Windows Phone, courtesy of Zynga. While there are popular alternatives already in place, such as Wordament and SpellIt, the official version (itself a clone of Hasbro’s Scrabble) is far more popular. Similarly, Gameloft announced Asphalt 7 and NOVA 3 for future multi-core devices.

Nokia is also furthering its own app catalogue with a Scalado-built app called Camera Extras, which adds Panorama and Timer modes to the existing camera interface.

The last we heard, Windows Phone had around 100,000 apps, so it’s nice to see the number officially reported. 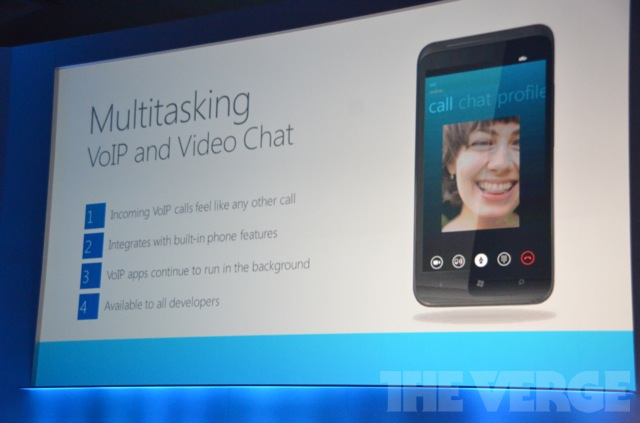 Another great feature in Windows Phone 8 will be deep Skype integration, which means that you will be able to receive calls in the background. Calls will look and sound identical (Microsoft claims) to regular calls, so the interface should give you the option of calling someone over VoIP if it detects that you’re logged into Skype. This should cut down a Windows Phone user’s need for extended voice minutes from their carrier.

We’re also hearing that Windows Phone 8 will offer in-app purchases for apps, so freemium is being pushed in a big way on the burgeoning platform. We didn’t hear anything about a re-jigged notification system, but we hope Microsoft tweaks that a little before launch.