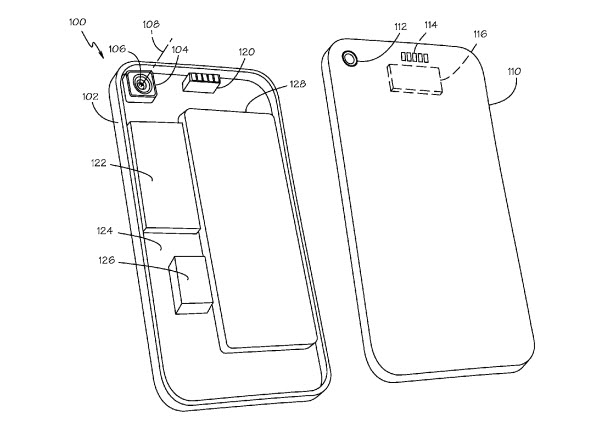 Apple has filed a patent titled ‘Back Panel for a Portable Electronic Device with Different Camera Lens Options’ which is, simply, a method for removing the back cover of an iPhone to replace portions of the camera hardware.

While this is unlikely to come to market in its current form — the patent was filed in December 2010, six months after the debut of the iPhone 4 — it’s an interesting glimpse at a company willing to try practically anything at least once. Phones are getting less modular, not more, and are usually designed not only with non-removable batteries but the iPhone has never had a back cover.

The capabilities could be quite interesting: extending the length of the camera lens to support an optical zoom that could be manipulated via gestures on the touchscreen. Or you could replace the built-in lens with a macro variety, one that could make taking close-up photos much easier.

In order to preserve battery life, the replaceable back covers could come with their own power sources, perhaps for a larger, more “professional” flash. The industry can only go so far with thin and small optical sensors. Lens and optics technology hasn’t changed — in order to improve picture quality you need more light, not more pixels. The Nokia PureView 808 is a great example of this — 41MP on a much larger sensor is used to create fantastic 5-8MP photos at much higher detail.

There’s no way to predict what Apple will do with this patent, if anything. We’d be highly speculative of any rumours involving a replaceable iPhone back cover — that seems to go against everything Apple has been focusing on in recent years.