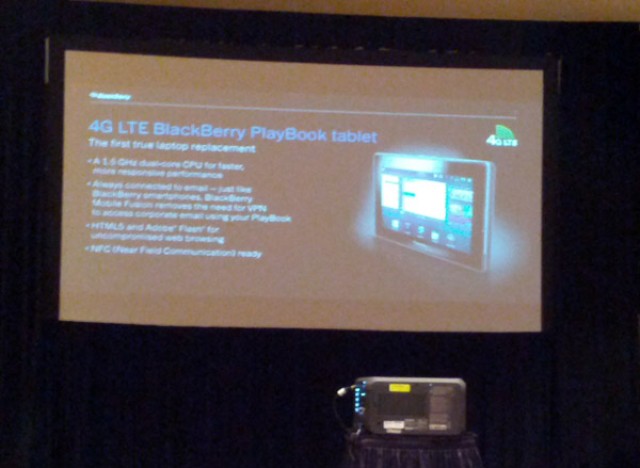 At Mobile World Congress in 2011 RIM “announced plans to launch two additional BlackBerry 4G PlayBook tablets during the second half of 2011, featuring support for LTE and HSPA+ high speed wide area wireless networks.” Months have passed an nothing has officially been launched. However, there’s been an ample amount of leaked images over the past few months showing the tablet exists.

Earlier today, before the big BlackBerry World 2012 Keynote, a RIM marketing executive took some time to speak to a few people and confirmed some upcoming specs of PlayBook 4G LTE. According to this slide it shows that RIM will be launching pack the 4G LTE PlayBook with an updated 1.5Ghz dual-core processor, NFC (Near Field Communication) and “always connected to email” with highlighting the BlackBerry Mobile Fusion feature. The display is expected to be the same at 7-inches. As for the OS, still rocking OS 2.0 (possibly 2.1).

Nothing was officially announced today at any of the events. Tomorrow is a new day.