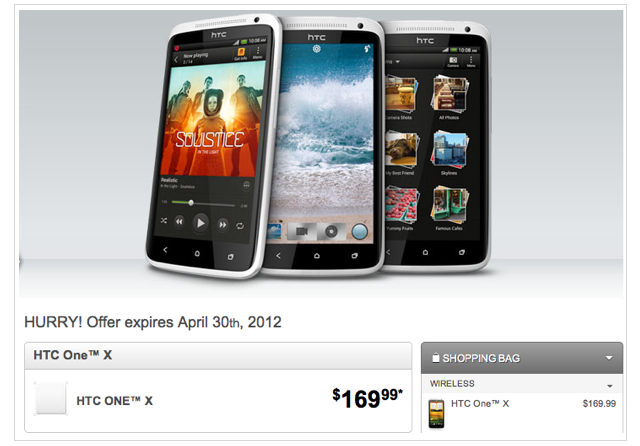 Boom! Rogers said the HTC One X would be available sometime “this Spring” and it looks like the Android OS 4.0 device has been graced with the familiar “coming soon” label. In addition, Rogers has put this up on pre-order status for the 3-year contract price of $169.99. In a press release yesterday Rogers noted that the One X will be available this month and they’ve boldly stated on the pre-order page states “HURRY! Offer expires April 30th, 2012.”

To get the hype going – not that the device needs it – Rogers has bundled in a contest for that could have you win a HTC Prize Pack that includes a trip to the 2012 Much Music Video Awards.

The One X has a 4.7-inch display that’s made of Gorilla Glass, OS 4.0, Sense 4, 1.5Ghz dual-core Snapdragon processor, 1GB RAM, 16GB internal storage and an 8MP camera that captures photos at 10FPS and shoots 1080p videos. Have a look at our hands-on of the One X here.

Check it out here at Rogers
(Thanks Pete!)