Google: 11 billion apps have been downloaded from the Android Market [Audio] 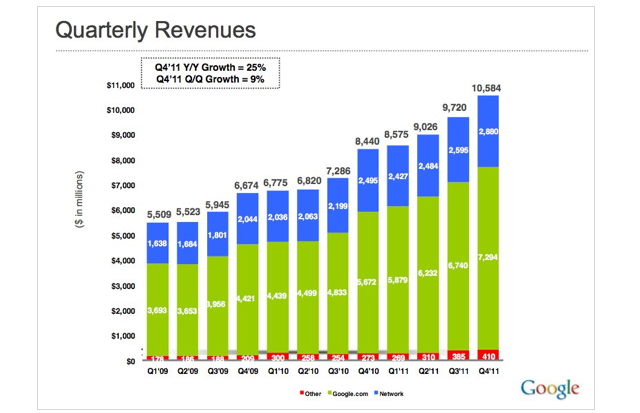 Google has just announced their Q4 and fiscal 2011 results – revenue was up a staggering 29% from last year, plus they hit $10.58 billion for the quarter (this was the first time they rose above the 10 billion mark). In the press release CEO Larry Page stated that “I am super excited about the growth of Android, Gmail, and Google+, which now has 90 million users globally – well over double what I announced just three months ago.”

During the Q3 2011 conference call in October Page describer Google’s results as “Gangbusters”, but this time around he seemed to be more astonished, specifically to the growth of Android, saying that it’s now “mind boggling”. Page said “Android is quite simply mind boggling. 700,000 phones are lit up everyday and I’m please to announce 250 million Android devices in total, up 50 million from our last announcement in November. In just two days over the holiday weekend 3.7 million Androids were activated. And today, we’re announcing over 11 billion downloads from Android Market. Wow.”