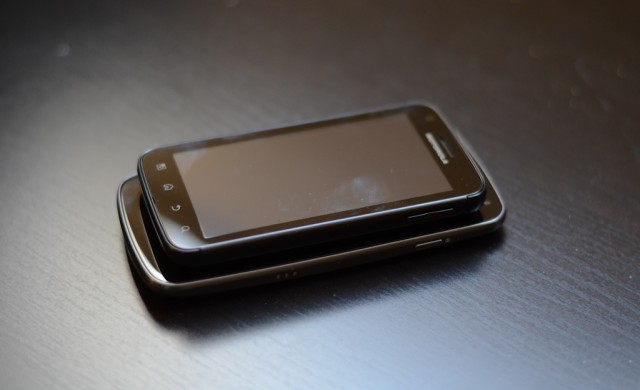 A new theory has emerged, from the Apple-hewn mind of John Gruber, examining why Android devices have proliferated in size of the past two years. For a long time, the standard display size of an Android device was between 3.7- and 4-inches (think Nexus One and then Nexus S), but since the advent of WiMAX and LTE chips, handset sizes have increased dramatically to compensate for the bigger chips needed to power them.

Not only that, since we do not have an all-in-one SoC solution (yet) for LTE, all devices with the high-speed technology must have room for an extra chip on the very small motherboard. This is likely the reason Apple decided to hold off on LTE for a generation (or two). And, with the need for LTE (to differentiate from the market) these Android vendors needed bigger batteries to deal with all this extra power. Hence, the 4.3-inch handset era was born. Gruber cites the Nokia Lumia 900, which is 4.3-inches to the 800’s 3.7-inches as an example: the only major difference between the two handsets, internally, is the addition of a LTE chip and a front-facing camera. As a result, he posits the device needed a bigger battery, so the bigger display was merely a forgone conclusion.

Now, sure there were large handsets long before LTE showed up, but they were the exception to the rule, and usually had some other marginal feature to separate it from the pack. A prominent display expert, Jin Kim, purports that it is the way Android’s framework deals with higher pixel densities that has led to the increase in handset sizes. As we near the “Retina Display” territory in Android handsets, among the first of which is the Galaxy Nexus and LG Optimus LTE, Kim claims that if we kept handsets at smaller display sizes with these current pixel densities, the touch areas would be far too small to use.

The way that Android renders different screen densities is very different from Apple’s, in that it has to adjust for multiple display resolutions and sizes. The larger the screen, the physically larger the touch area, unless you increase the DPI. The Galaxy Nexus, with its 4.65-inch display and 320~DPI could not have, according to Kim, had a smaller screen size because all the touch points would have been minute.

Either way, it’s an interesting theory about whether it was consumer demand that influenced these larger screen sizes, or whether various marketing departments spun it that way out of necessity. I may not agree completely — the articles gloss over the fact that larger handsets are easier to read, better for browsing and photos, and generally more consumer-friendly — but it’s easy to see, from a design perspective, why adding LTE to a handset would have forced manufacturers’ hands in creating larger devices.

What’s even more interesting to think about what will happen to handset sizes once LTE chips become more efficient: will battery sizes stay as large as they are now to bring demonstrably better runtime, or will the market push handset sizes back down to a more “reasonable” point?