Android’s next big thing, Ice Cream Sandwich, gets shown off on camera

On a day that brought us one tablet disguising its Android roots, it’s a nice jolt of reality to remember that Google is still working on its core mobile asset: Ice Cream Sandwich.

Apparently, an unassuming buyer of a Nexus S from eBay turned on his device to find it looked, well, different, from its intended Gingerbread colour- and feature-set. Upon further investigation, it looks like the developer phone is running an early build of ICS, or an incredibly finely-honed fake.

We certainly see the Honeycomb colours coming through, and the advanced multitasking menu, along with what looks like a very smooth new implementation of widgets through the app drawer. The camera has received a refresh, too, though it’s still a dull grey that we were hoping would be given a bit of an aesthetic overhaul.

Unfortunately the video doesn’t delve too deep into the internals, but the settings menu indeed looks more feature-filled. We also like the new font that Google have implemented system-wide. Much more readable.

It’s also possible to get straight into the camera app from the updated lock screen, which clearly resembles Honeycomb’s. To all the doubters out there, this indeed could be an elaborate fake, as the modding community has been known to do some incredible things. But as a Nexus S user, I’ve never seen this ROM before, or anything resembling it, and the changes seem more framework-oriented than mere aesthetic plastering.

We await the next month or two with open arms. 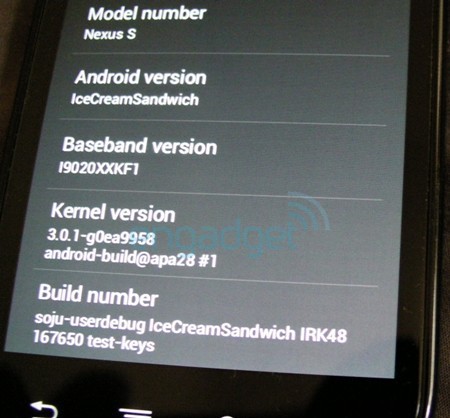