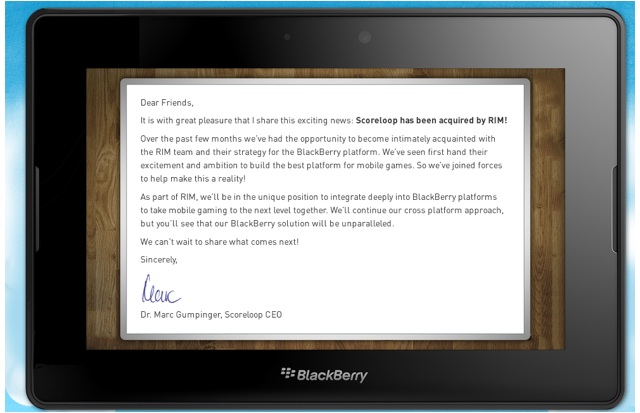 RIM has announced on their developer blog that they acquired a company called Scoreloop. Never heard of them? You’re not alone. Scoreloop is headquartered in Munich, Germany and helps developers by adding a social aspect to their games. It’s not one OS as they have done work for iPhone, Android and BlackBerry. According to their site developers can add a “simple social network connections to in-app purchases and virtual currency, Scoreloop makes mobile games more social and profitable”.

Scoreloop CEO, Dr. Marc Gumpinger, stated that “we’ll be in the unique position to integrate deeply into BlackBerry platforms to take mobile gaming to the next level. We’ll continue our cross platform approach, but you’ll see that our BlackBerry solution will be unparalleled.”