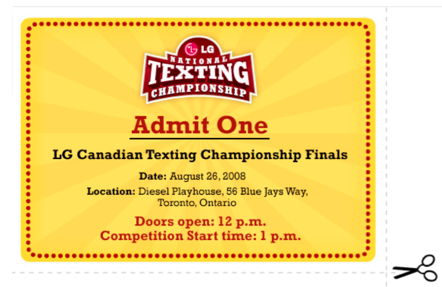 Canada has certainly been hit with mobile madness in the past few weeks with recent releases such the BlackBerry Bold, HTC Touch Diamond, Samsung Instinct, Apple iPhone and the LG KEYBO.

With all this flurry and our pent up Canadian energy has made us all go a little bonkers! If you want to go for a good release you can always check out the friendly competition that LG is putting on conveniently named the “LG Candian Texting Championships”. This was originally announced back in June and the US champion has already been crowned (Nathan Schwartz won $50k).

The object is to compete against to see who can text a sentence faster. LG has been touring Canada and have come up with a group of finalists that will compete for $25,000 and a trip for two to Cancun, Mexico. If you want to attend this event and be part of the audience, LG is giving away tickets for the final competition happening on Tuesday, August 26th in Toronto at the Diesel Playhouse. The doors open at 12pm and the event starts 1pm. Learn more about the event here

You can also use the ticket attached to get in!