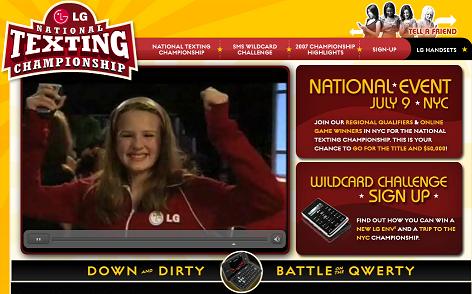 Think you got skills? If you are Canadian, have quick fingers, want to win a cool $25,000 or a trip for two to Cancun, Mexico… you might want to take part in the first LG Canadian Texting Championship!

The event is officially launched last year in the United States and truly looked like a blast. Check out the videos here. Players go up against each other to see who can text a sentence faster, then people eventually get eliminated and the winner is crowned. The last text challenge in the US competition last year was: “Supercalifragilisticexpialidocious. Even though the sound of it is something quite atrocious. If you say it loud enough you’ll always sound precocious.”

The Canadian championship started today in Toronto and goes around the country where the 2 fastest players will become regional qualifiers and be brought back to Toronto for the final on August 26th. (Two regional qualifiers will be chosen from BC, the Midwest Region (AB, SK, MB), Ontario and the Eastern Region (QP + Maritimes). Speed and accuracy of the text submitted are taken into the judging factor.

Players compete on their choice of the LG Keybo (from Telus coming soon), LG Rumour (from Bell) or LG Vu (from Rogers) handset.

Andrew Barrett, Vice President, Marketing, LG Electronics Canada said: “Canadians love to text, so what better way to showcase their skills than at the LG Canadian Texting Championship? We’re looking forward to an exciting kick off in Toronto, and are confident that Canadians will give the championship a big thumbs up.”

Anybody in Canada can register for this challenge. Find our more here www.lg.ca/texting