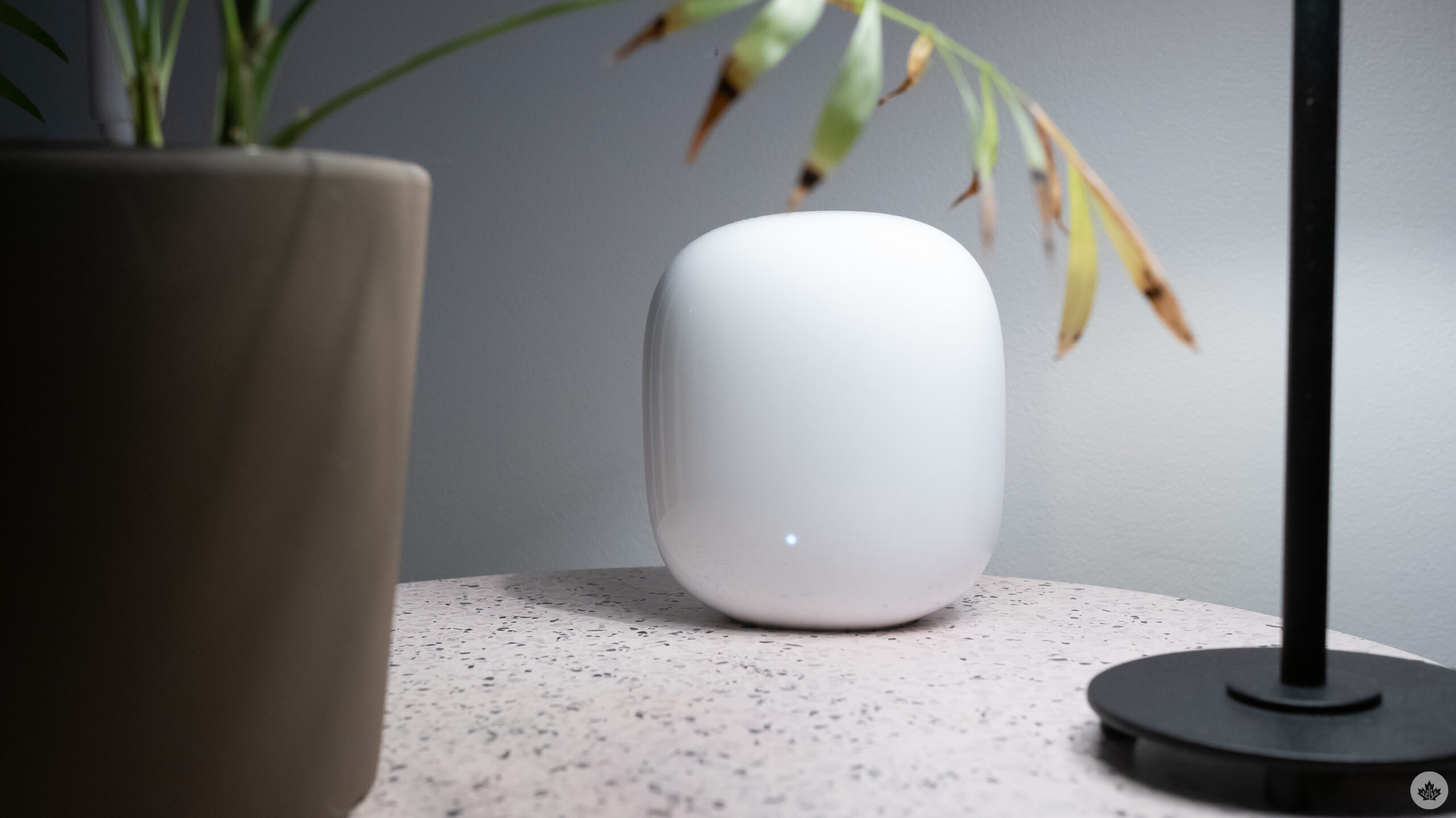 While the experience has been relatively solid, I’ve encountered a few issues. Along with finding a “great” connection between Points being a finicky process (I eventually settled for “good”), the Nest Wifi occasionally drops my internet. Frustratingly, it doesn’t always intelligently switch between nodes or my devices aren’t smart enough to know what Point to connect to.

This often results in my smartphone being connected to the Nest Wifi in my office on the top floor of my home or my Apple TV 4K connecting to the basement Point instead of the one a few feet away from it. Of course, this could be blamed on the fact that I live in a 1,100 sq. ft. townhouse, and a single 2nd-gen Nest Wifi router can cover 2,200 sq. ft, possibly creating confusion with the signal. 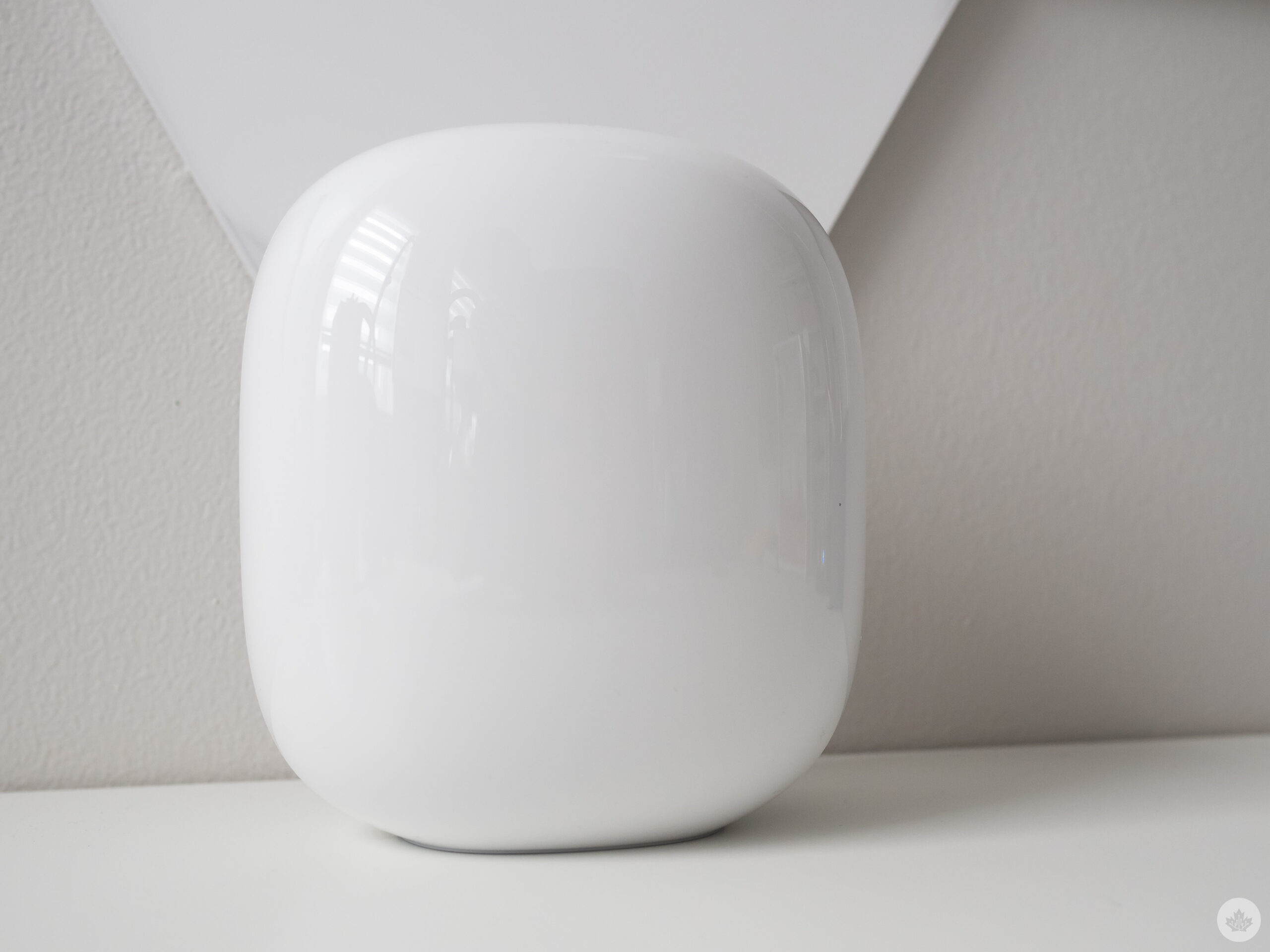 I have upwards of 30-40 devices connected at a time, smart home devices in my backyard and at the front of my home, so painting a reliable mesh connection where great Wi-Fi is accessible everywhere is what I’m always after. Cutting my setup down to one Nest Wifi router or even just a single router and a Point didn’t fix this, with my garage and my backyard becoming notable dead zones.

This is (hopefully) where the Nest Wifi Pro comes in to save the day.

First off, I tested a single Nest Wifi Pro on its own to see if it was capable of blanketing my relatively small house with reliable Wi-Fi. Besides the Nest Wifi Pro in my office, I hit pretty impressive speeds of 844Mbps download/30Mbps upload over a wired connection (I pay for gigabit internet via Cogeco but usually get between 750Mbps and 850Mbps. Over Wi-Fi with Speetest, on the other hand, I only hit 750Mbps download/25Mbps upload with my iPhone 14 Pro directly beside the Nest Wifi Pro.

When I went down to my living room, that speed dropped down to between 30-150Mbps download and between 3Mbps-5Mbps upload. When I headed down to my above-ground basement, the situation became worse with 20Mbps download and 1Mbps upload. Placing this in context with the speeds I received with my Nest Wifi router and two Points, the results were pretty brutal (each Nest Wifi covers 2,100 sq. ft. and accompanying Points cover 1,500 additional sq. ft., while the Nest Wifi Pro claims to cover 2,200 sq. ft. on its own). 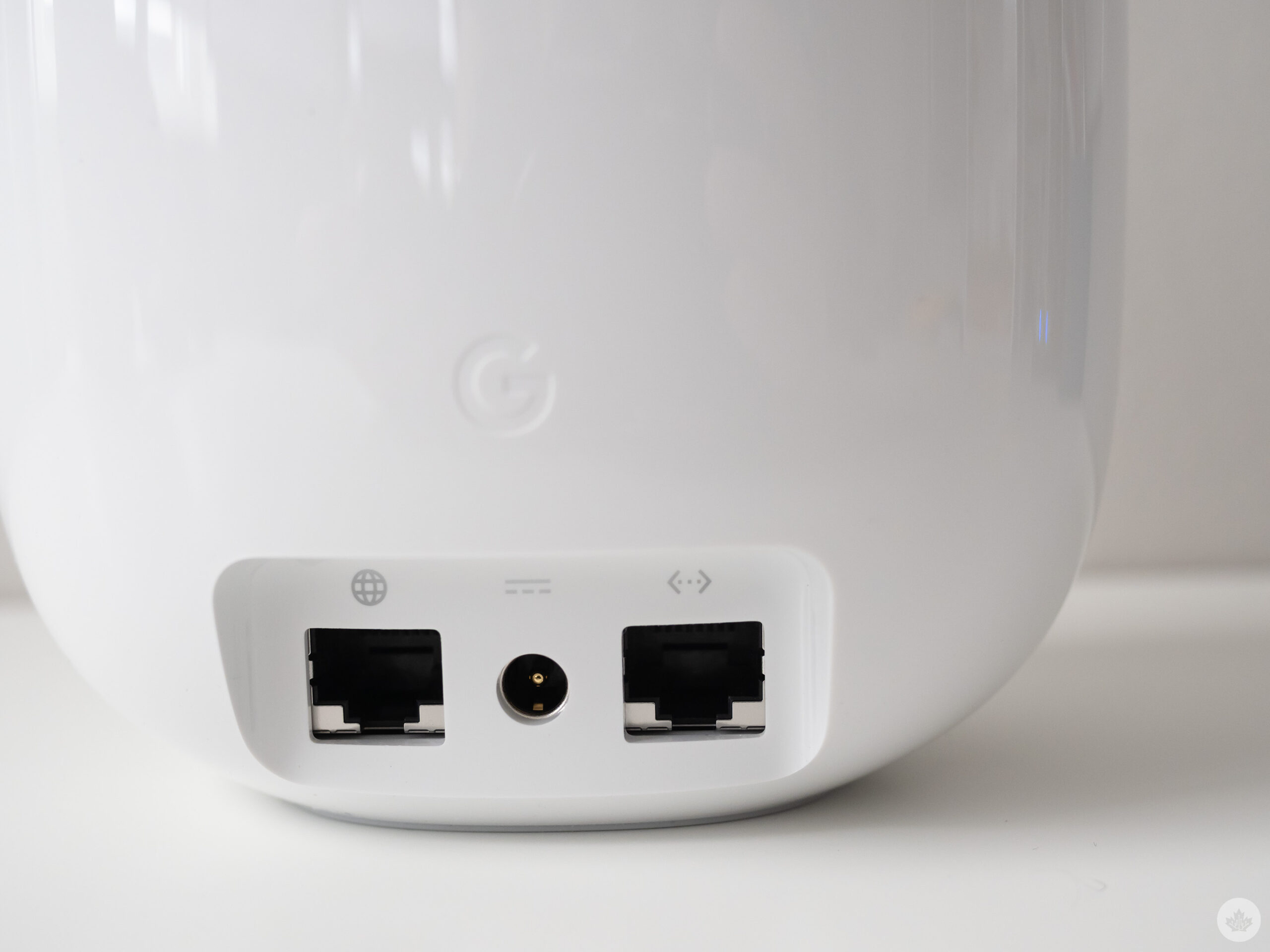 It’s clear a single Nest Wifi Pro won’t work for my home’s layout, so I set up two additional Points hoping that it would solve my issue. With the Nest Wifi Pro, the setup process is relatively simple and done through Google’s Home app, but I’ve still never been able to get the setup QR codes to scan consistently (I resorted to inputting the code on the bottom of the Wifi Pro manually).

I placed the two additional Nest Wifi Pros in the same location I put the Nest Wifi Points. Unfortunately, I ended up with similar results and needed to move them around slightly (I think the “weak” signal issue may have been caused by interference from the Arlo Ultra Base Station I moved to my living room). After a few minutes of experimentation, I was able to get a “good” connection between all points that sometimes turned into a “great” connection. 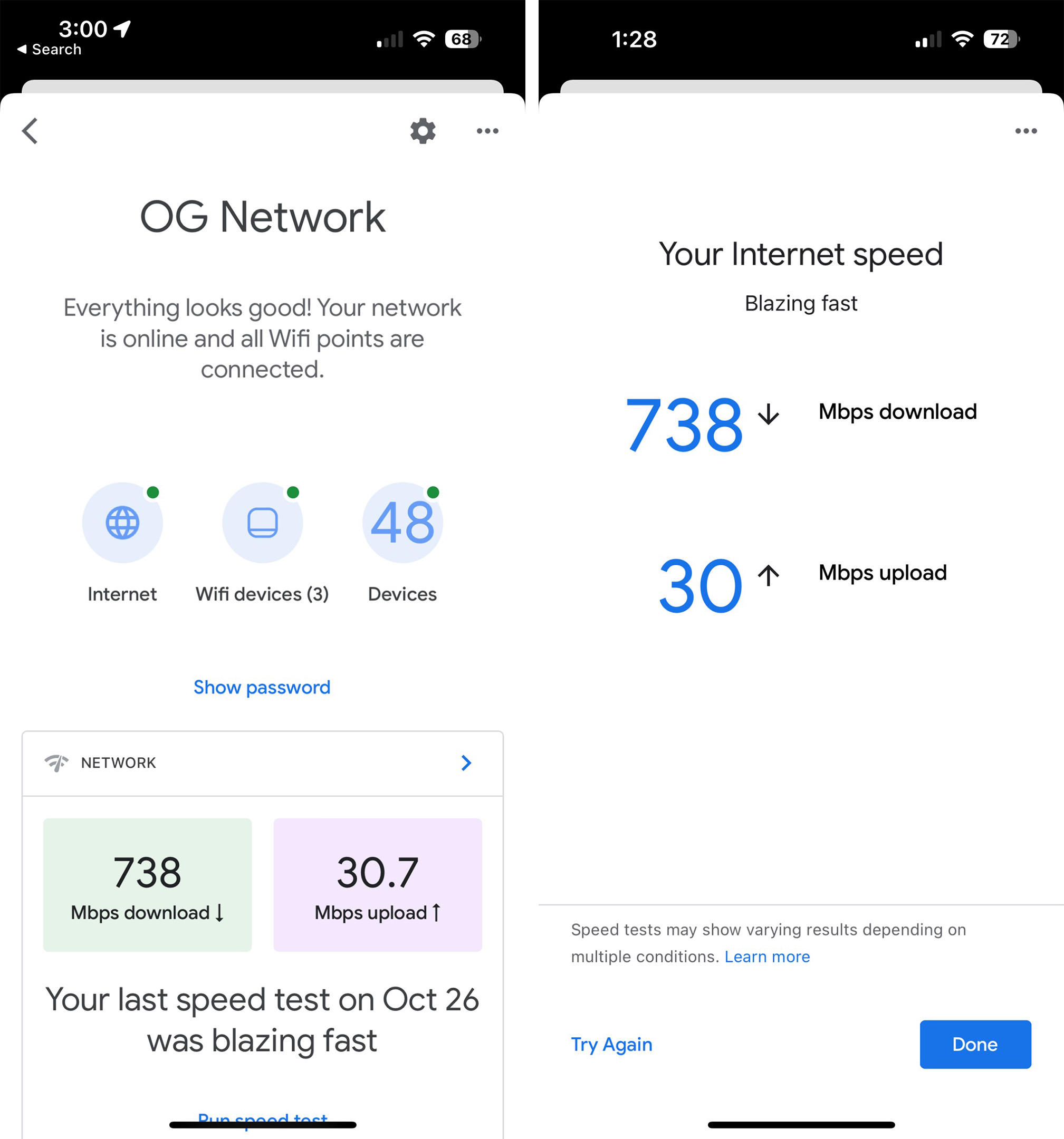 So how did this improve my network speeds? Through the Nest Wifi Pro in my living room, I was able to get roughly 230Mbps – 300Mbps download and 25Mbps upload, a pretty notable improvement over the single router and a jump over the 150Mbps I typically received with the Nest Wifi Point. In my basement, I received about 330Mbps, which is slightly above the speeds I received from the living room Nest Wifi Pro.

I’ve only had the mesh system set up for a few hours, but it’s been reliable and snappy so far. It also seems like devices more intelligently switch between Nest Wifi Pro units compared to the standard Nest Wifi and its Points. I’ll continue testing the Nest Wifi Pro over the next few weeks and will update this story if I begin to encounter issues.

Other new Nest Wifi Pro features include the return of a built-in ethernet port. This is a great move, and I don’t understand why Google ditched the port with the 2nd-gen Nest Wifi after offering it in the Google Wifi. This lets you jack in with a direct wired connection when it’s necessary. For example, I moved the Arlo Ultra’s base station to my living room, giving it a much stronger connection to the wireless camera in my backyard, and I’m also considering connecting my Apple TV 4K directly to the device.

Other new features include Wi-Fi 6E, which offers faster speeds and uses the less crowded 6GHz band. Of course, like all routers that support the latest form of Wi-Fi, you need compatible devices. I cover the tech industry and review products for a living, and as far as I’m aware, I don’t own a single device that supports Wi-Fi 6E (even Apple’s iPhone 14 series only supports Wi-Fi 6).

I’m sure that will change over the next few years, but for now, I’m left out of the 6E fun, and most other people will be too. Like all new routers, the Nest Wifi Pro supporting Wi-Fi 6E will be future-proofing more than anything. 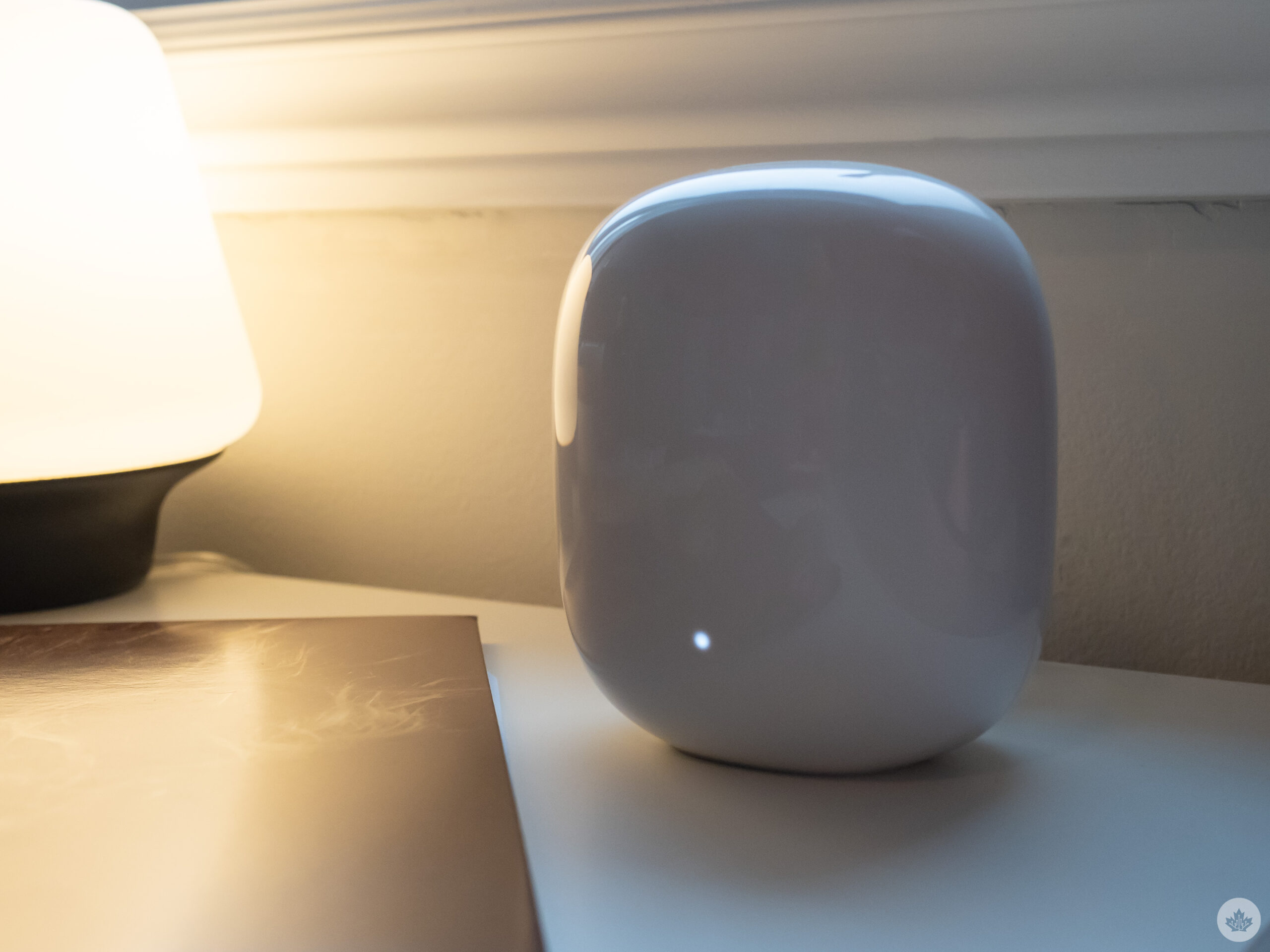 Speaking of preparing for the future, the Nest Wifi Pro will also work as a Thread border router once Google updates it with Matter support. Matter, formerly called Project CHIP, is the next big thing in smart home tech set to improve how devices communicate with each other. Thread is a wireless networking technology designed specifically for IoT and smart home devices. It relies on border routers (like the Nest Wifi Pro) to connect devices instead of weighing down your Wi-Fi connection with them.

Unlike the Nest Wifi, there are no Points with the Wifi Pro. Every Nest Wifi can be the base router. This also means that the Nest Wifi Pro isn’t compatible with earlier generations of Nest Wifi, and it doesn’t include Google Assistant/Smart Speaker support, forcing me to move some of my Google Home/Nest devices around to maintain voice assistant coverage across my home. While this isn’t surprising, it’s still disappointing, especially for anyone considering upgrading and hoping to continue using their Nest Wifi Points.

It’s worth mentioning that I’m not a fan of the Nest Wifi Pro’s design. It’s very glossy (as you can see from the photos in this story), unlike the matte Nest Wifi, which attracts more fingerprints and dust. In Canada, the Nest Wifi Pro is only available in ‘Snow’ and ‘Fog,’ while our counterparts in the U.S. get cool colours like ‘Linen’ and ‘Lemongrass.’ Of course, this is a router that sits staticly in your home, so the design doesn’t matter that much, but still, I prefer the understated look of the Nest Wifi to the new Nest Wifi Pro.

Like Google’s Nest Wifi, the Wifi Pro is managed through Google’s Home app. Within the app, you can set up a family Wi-Fi connection that pauses the connection on kids’ devices at bedtime, a guest network and manage all of the devices connected to the router. The mesh router also automatically prioritizes high-bandwidth traffic like gaming and video calls and optimizes its band use, just like its predecessor. 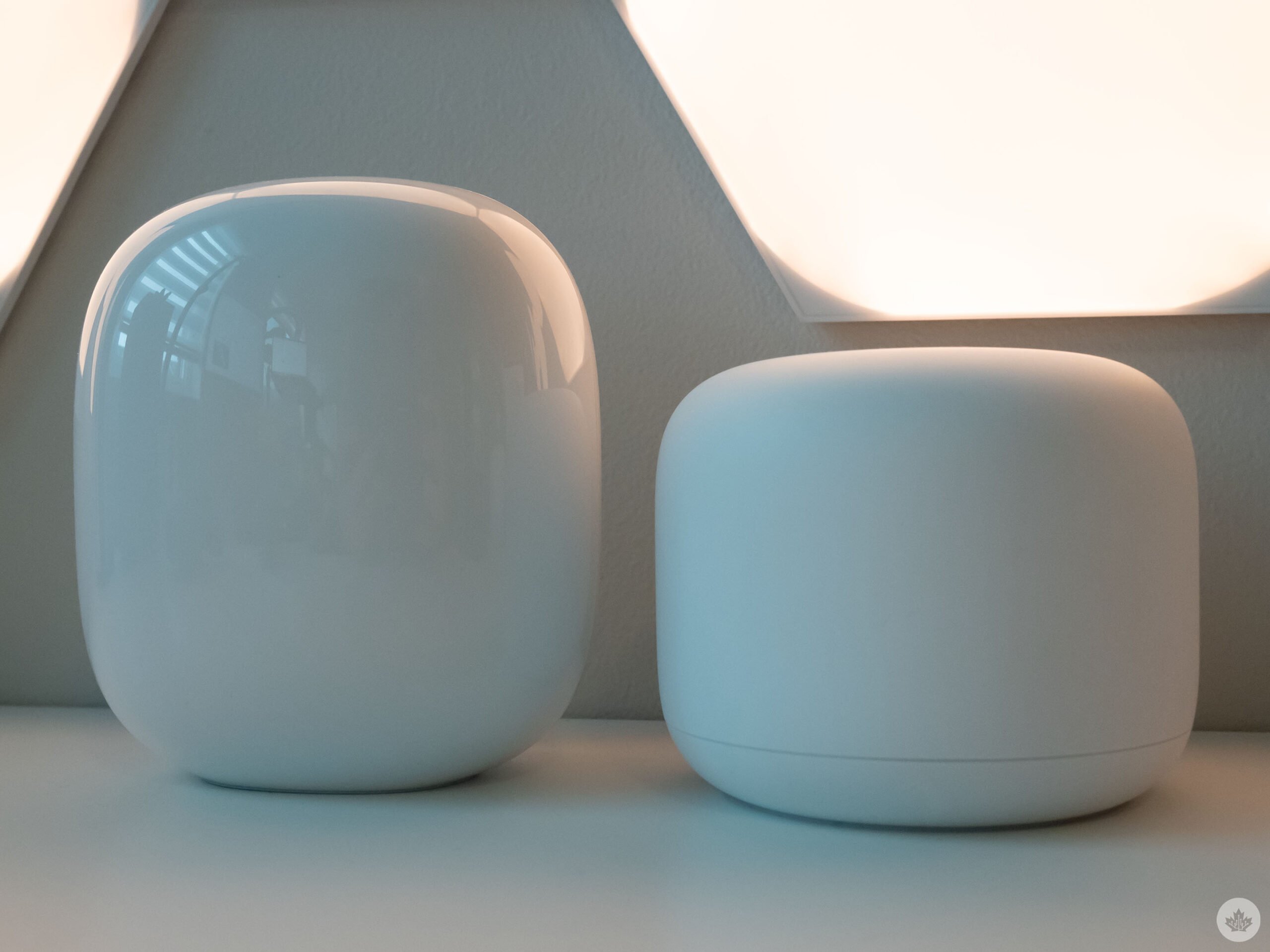 I’m still not sure if the upgrade to the Nest Wifi Pro is worth it for most people. For someone like myself that has dozens of devices connected in their home at the same time and has craved a solid mesh signal for years, I’m impressed with the improvements Google has made to its route with the Wifi Pro. I plan to spend more time with Google’s Nest Wifi Pro in the coming days and will update this story with more impressions.