Toronto-made The Big Con is a pretty rad 90s romp 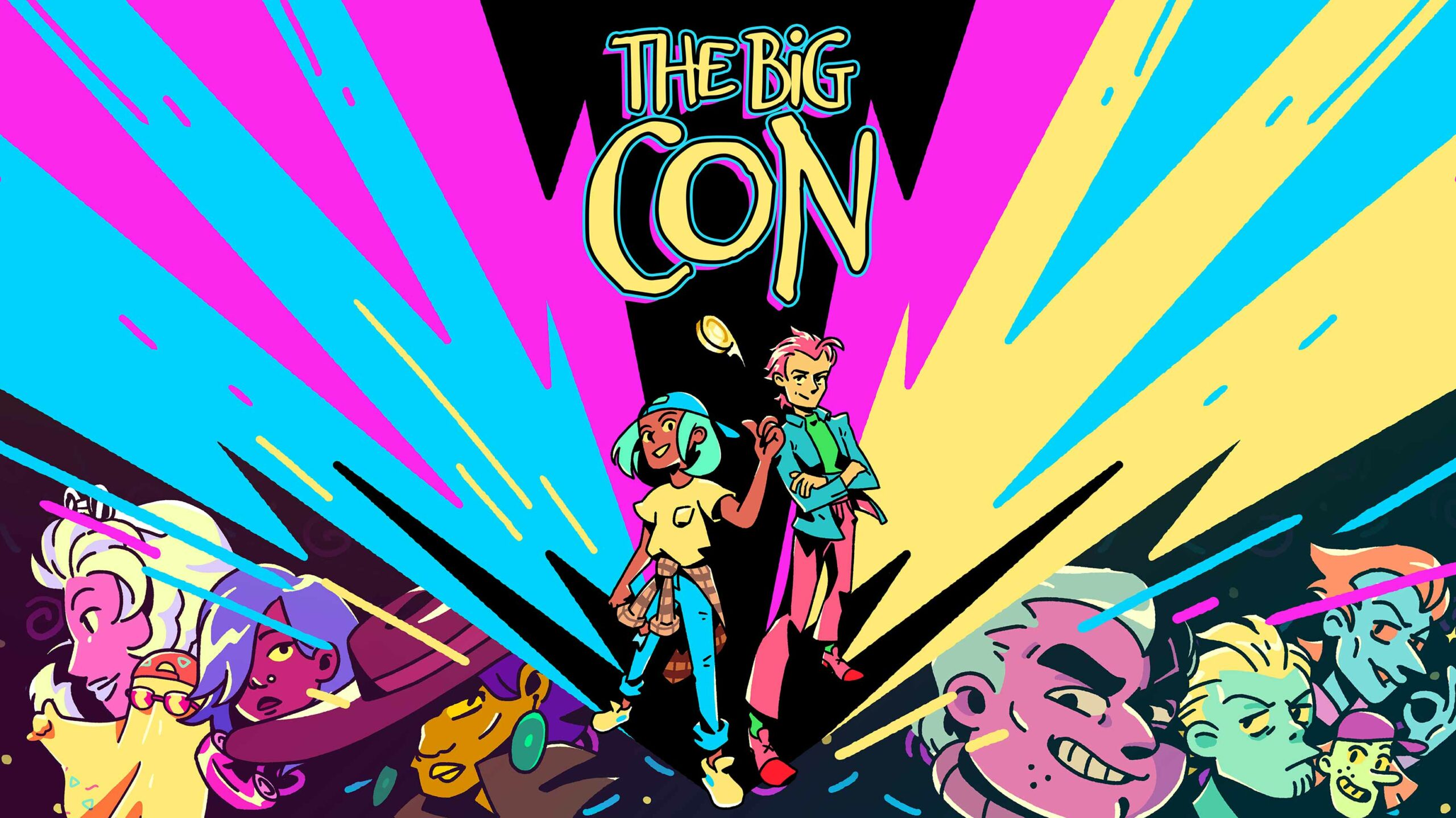 I’m a sucker for coming-of-age movies.

The Big Con, a new adventure game from Toronto-based indie developer Mighty Yell, has captured the charm and heart of such films to a tee. Set in the ’90s, the game follows a con artist named Ali as she goes on a cross-country trip to make enough money to save her mother Linda’s small-town video store from loan sharks.

“Art director Saffron Aurora has created a splendid Doug-esque aesthetic that nicely blends with Dan Rodrigues’ upbeat music to perfectly capture the vibrancy of the era.”

Right off the bat, Mighty Yell does a wonderful job in using these deeply personal, morally grey stakes to get you to root for Ali. Beneath her lovably sarcastic exterior lies a genuine desire to help out her mother. At the same time, it’s easy to empathize with Ali’s frustrations with Linda’s (well-meaning) insistence that her future lies in music school. There’s a sweet dynamic between the two, with both wanting what’s best for one another but neither being fully able to communicate that, and it gives The Big Con an ample amount of heart all around. 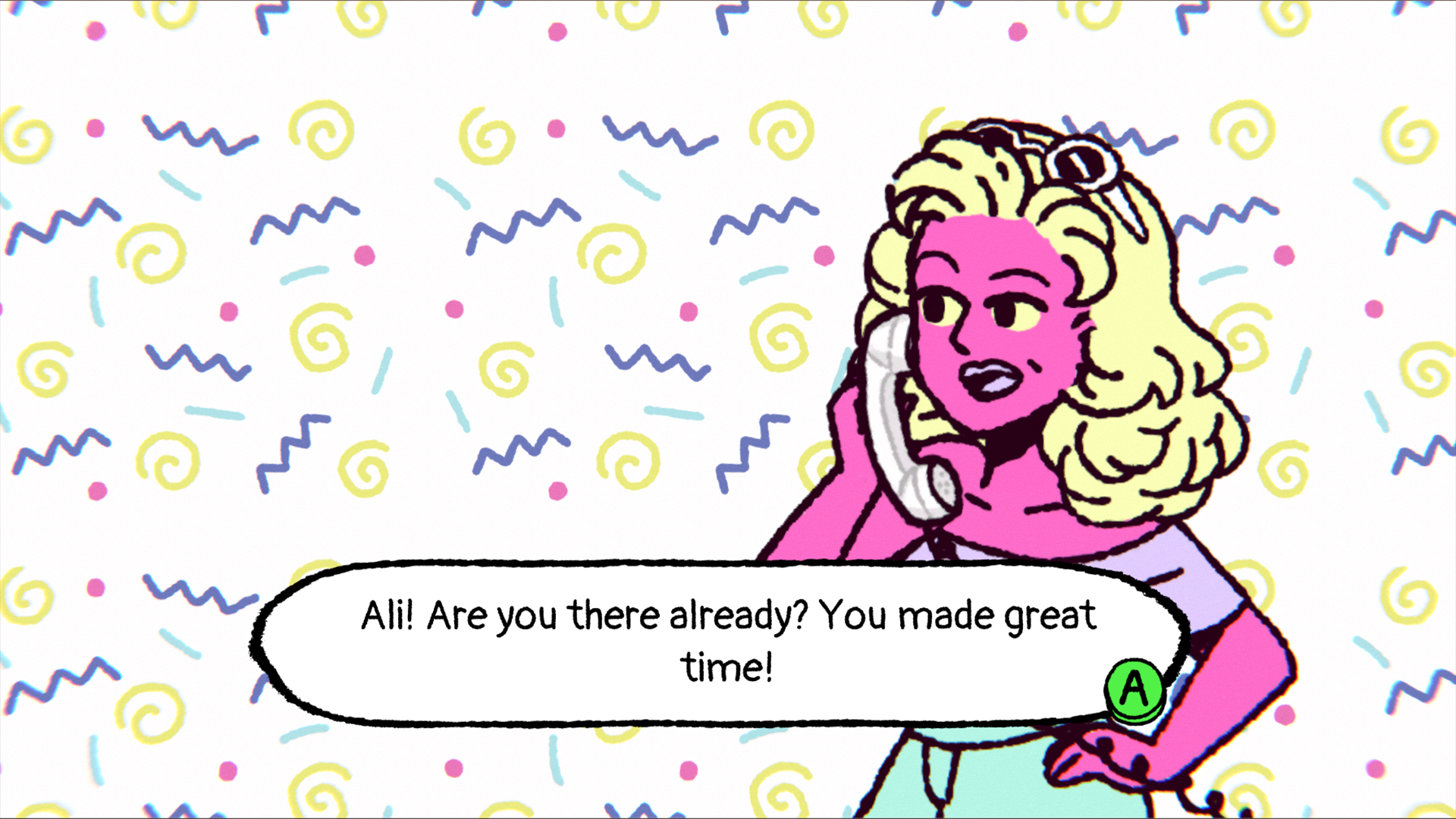 But the main focus of The Big Con is on creating a comedic and colourful vibe, and it more than delivers on that front as well. Art director Saffron Aurora has created a splendid Doug-esque aesthetic that nicely blends with Dan Rodrigues’ upbeat music to perfectly capture the vibrancy of the era. Meanwhile, co-writer/director Dave Proctor’s script is consistently funny as it bounces between riffs on everything from plaid and anti-drug ads to VHS tapes and laugh tracks. And if all of that wasn’t good enough, Mighty Yell’s even gotten Rockapella, the group behind the iconic theme to the ’90s series Where In the World Is Carmen Sandiego?, to write a catchy new song for The Big Con.

It also helps that the core gameplay loop is so engaging. Structurally, The Big Con is broken up into a few different areas in which you have to earn a certain amount of money to progress. How you reach your goal, however, is largely up to you. While the game is by no means an open-world teeming with sidequests, Mighty Yell should be commended for giving you a solid amount of choice. 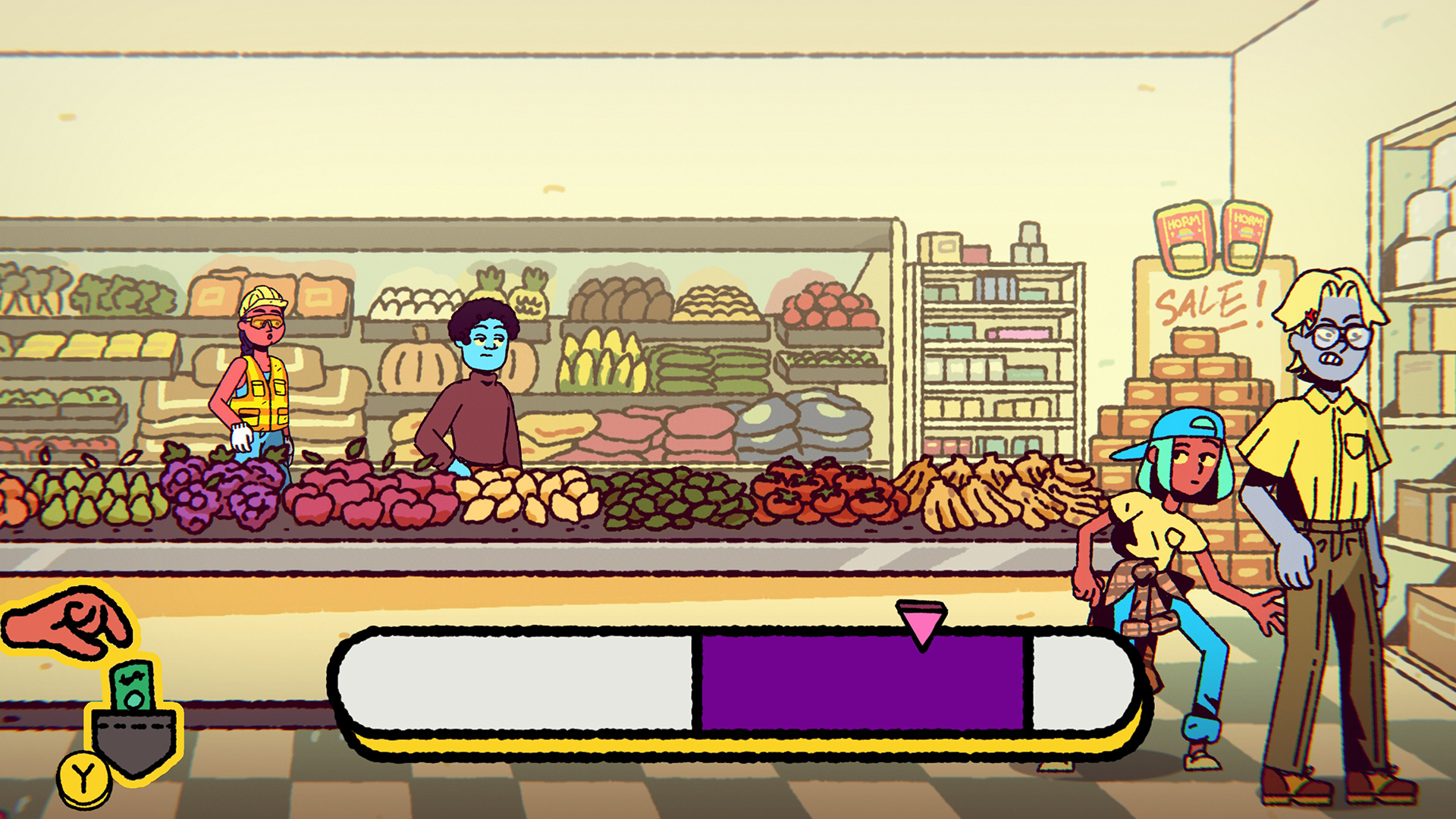 At a base level, nearly every NPC can be pickpocketed with a simple timed button press minigame that will normally net you small bits of cash. Some NPCs have a less forgiving window, in which case you’ll be given a strike in a Grand Theft Auto-lite style “wanted” system. You can offset this by using disguises you can find while exploring, but pickpocketing is so easy that I seldom bothered to use this otherwise conceptually intriguing mechanic.

What’s really rewarding, though, is taking on the optional quests. I made a point of doing everything in Ali’s journal — both of the mandatory and secondary variety — because I found it all so enjoyable, even well after I made enough money to move onto the next area. For example, in the early mall level, you’ll come across the flustered father of a pouty child who’s willing to pay top dollar for the new “must-have” Furby-esque plushie.

As luck would have it, there’s a special model behind a toy store display, but you’ll need to go around and figure out who to talk to and what items to sneak into the back to nab it. Another quest might have you finding your way into the upper-class car of a train to hear a hilariously long-winded stock broker’s Wall Street tips which you’ll need to try to remember to share with a would-be investor who’ll pay top-dollar for the info. 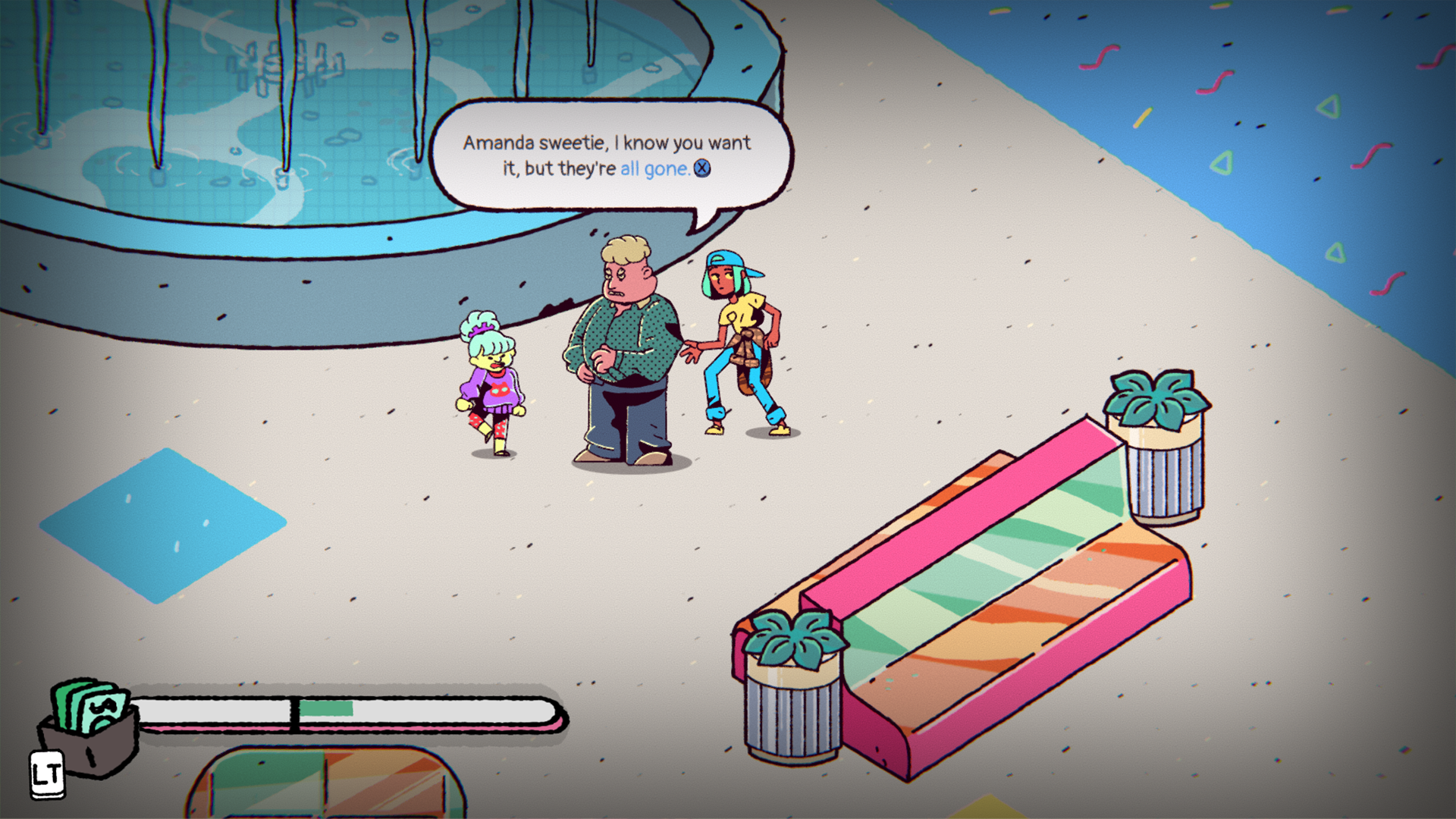 At the same time, Ali is new to the world of grifting, so you’ll frequently run into hurdles as you go, like suspicious security guards to win over or a drunken mark’s slurred words to make sense of. In these instances, Ali’s hilariously goofy imaginary friend ‘Rad Ghost’ (the apparent spirit of a deceased MTV-VJ) will be hanging around to offer some useful tips or even just let her vent. Rad Ghost is at once an entertaining and effective way of offering in-game tips while verbalizing Ali’s internal conflicts. Seeing how Ali struggles with — and, ultimately, overcomes — these challenges only further endeared me to her.

“Even if some gameplay and narrative aspects aren’t as fleshed out as they could be, the overall journey is an utter delight.”

The only missed opportunity amid all of this, though, is a deeper exploration of the morality of Ali’s actions. On the one hand, it’s refreshing to not see an arbitrary “good/bad” sort of metre here, but on the other, the game never has you confronting Ali’s actions in a meaningful way. Indeed, it really made no difference in the game whether I robbed a mother carting around a baby or a shady punk in a back alley.

Proctor told me in an interview earlier this year that the game’s demo had raised such quandaries among some people, but sadly, nothing in the final product ever compelled me to think that way. This, coupled with the relatively consequence-free pickpocketing system, disappointingly robs The Big Con of any meaningful challenge from both a mechanical and ideological standpoint. 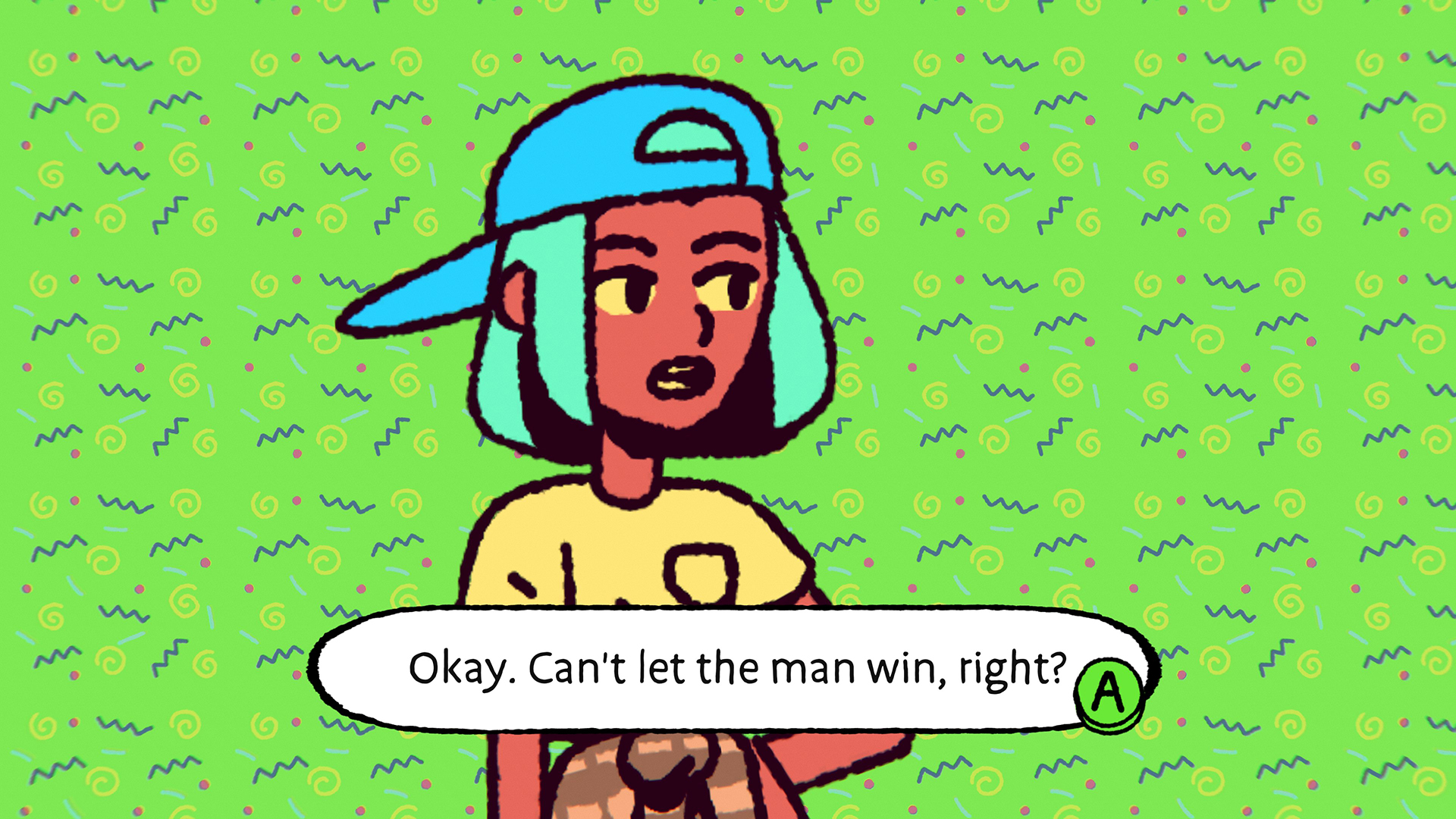 Ultimately, though, it’s hard to hold this against The Big Con when the game is, first and foremost, a lighthearted comedy — and a hella good one, at that. All told, The Big Con is absolutely the kind of indie game I actively seek out. It’s clever, bold, stylish and focused on a unique, combat-free gameplay hook. Even if some mechanical and narrative aspects aren’t as fleshed out as they could be, the overall journey is an utter delight. To use some ’90s slang, The Big Con is da bomb.