There’s a cool idea packed into this new Echo Show 10, but it’s not really for everyone 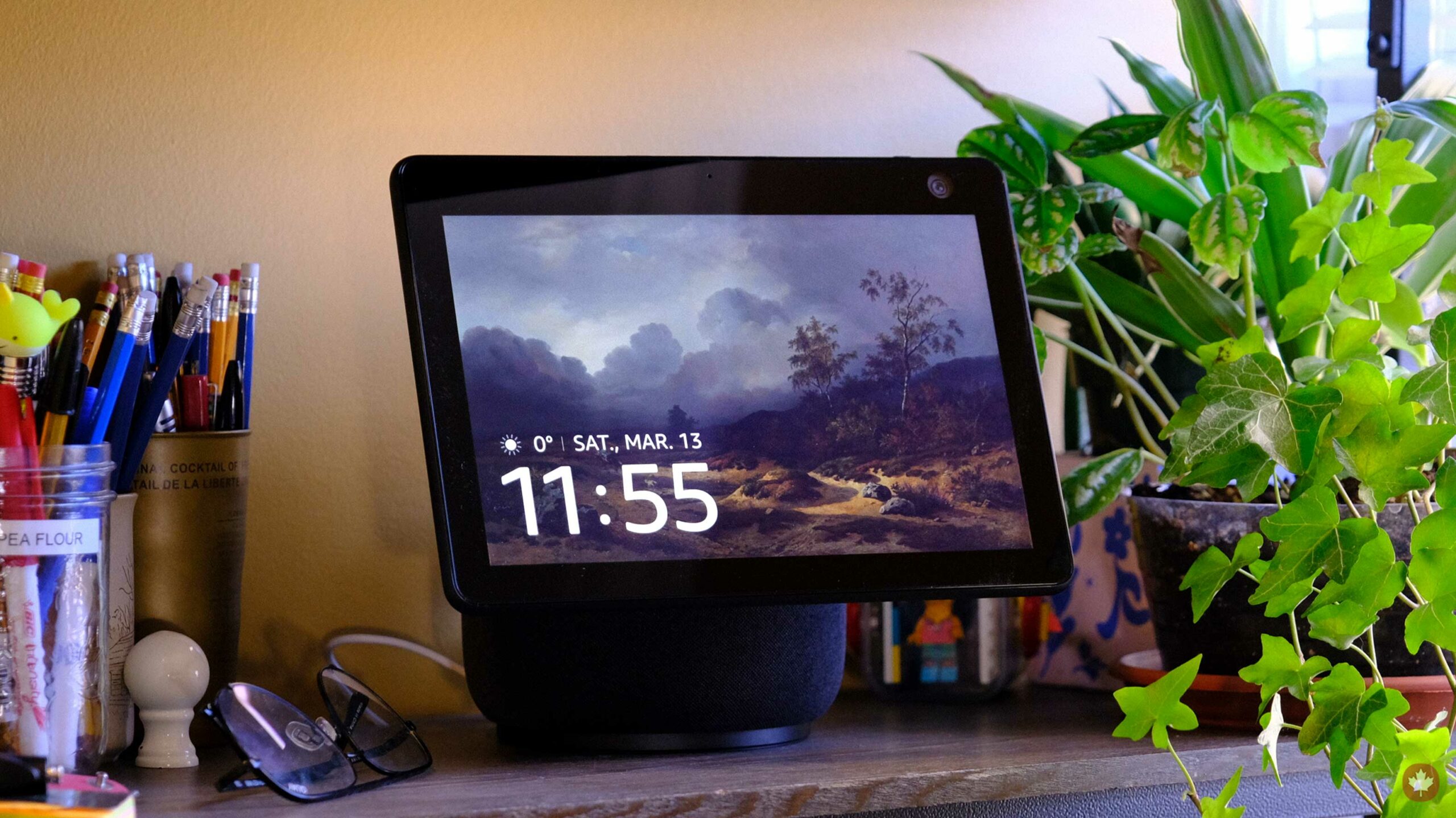 It shows its potential in large rooms with lots of open space, where it can spin and turn to be the perfect smart display for wherever you’re standing. That said, people with smaller homes are likely better off with any other smart display.

Beyond its rotating screen, the Echo Show 10 also includes interesting camera tech, a solid set of speakers and a Zigbee smart home hub. Amazon made sure that the device’s premium $329 price tag is justified with tech, but it comes down to if you are able to utilize it or not.

Let’s start with the screen 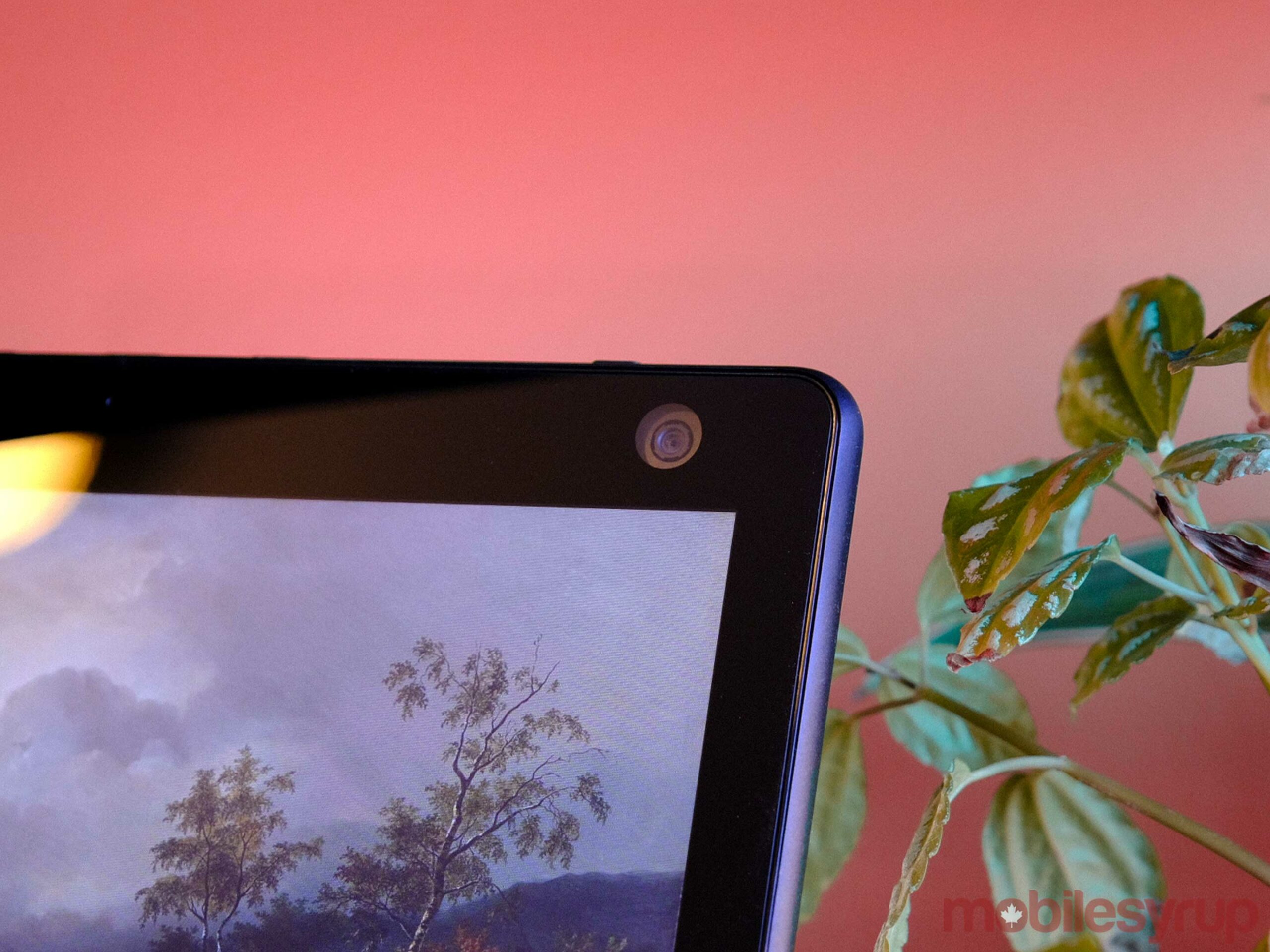 The central premise behind the Show 10 is that its screen can rotate to follow you around a room. This means that whenever you ask Alexa a question, the display should be facing you so you can see the result. In theory, this is great, but in practice, it only really works if you have the display on a kitchen island or in a larger room.

In every location I tried the Echo Show 10, it would either move so minimally that it wasn’t worth it, or took up too much table/counter space. However, I’m sure some people with split rooms could get a lot of use out of the swivelling screen.

When you set it up, you can also select how much you want it to rotate. For instance, if you have the Show 10 in a corner near a lamp, you can manually set how much it spins around to make sure it doesn’t bump into things or turns and faces the wall like a child on time out. 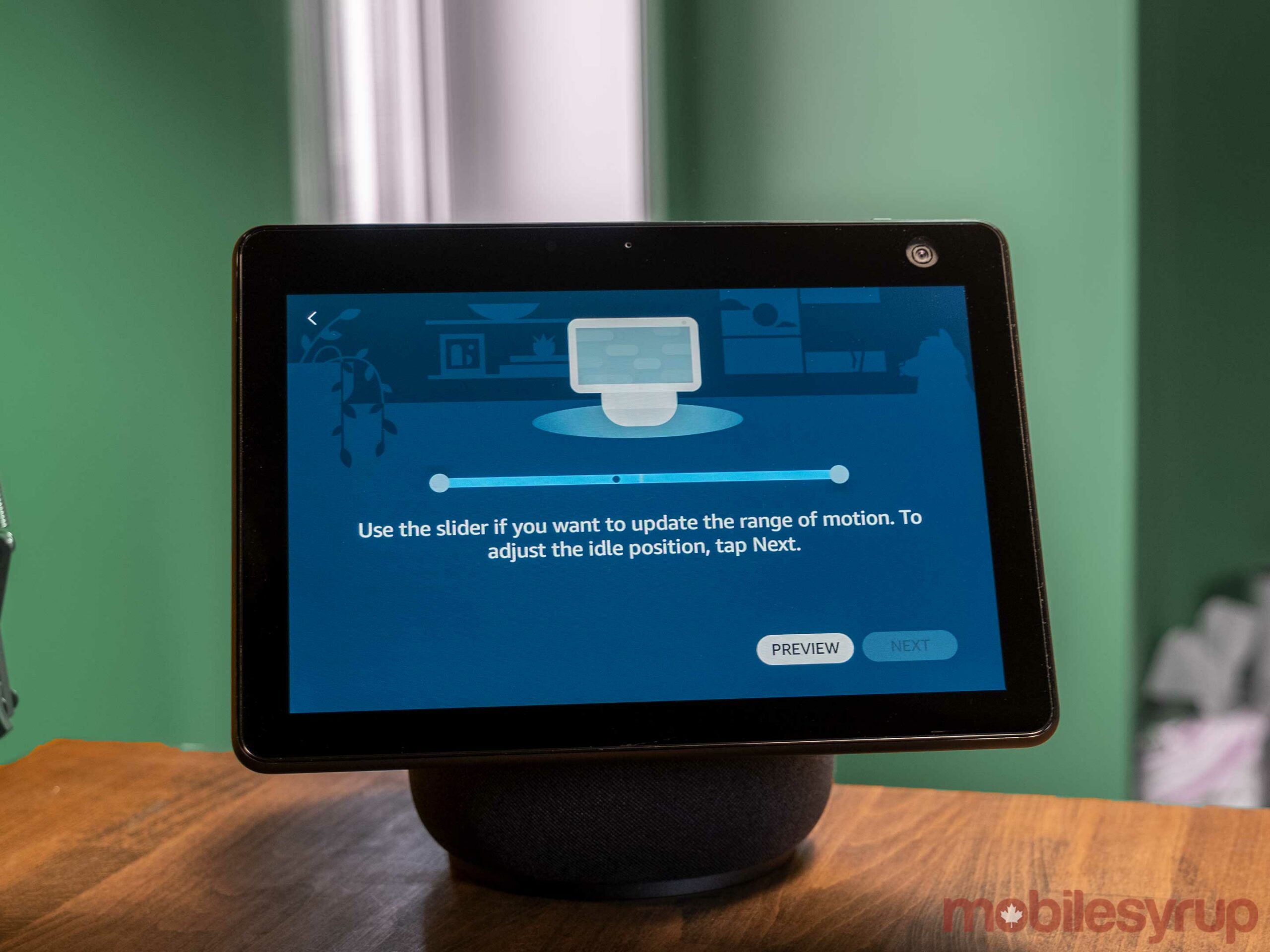 I will mention that I live in an apartment, so anyone with a larger home might have a bit of a different experience. Still, it’s annoying to look at your smart display only to see that it’s facing the wrong way since it lost track of you. To remedy this, you have to say “Alexa” again to trigger it to look at you. This is a lot of effort just to check the time or turn your recipe back to face you. It’s even worse when you say “Alexa,” and it doesn’t even turn to face you.

In terms of quality, the screen is a large 10-inch panel with a 1280 x 800 pixel resolution. It’s colourful and well-lit, and I have no issues with it. It’s not as crisp as an iPad Pro, for example, but it’s more than sharp enough to use as a video screen if you want.

There are volume up and down buttons, a mute switch, and a slider to cover the webcam along the top. 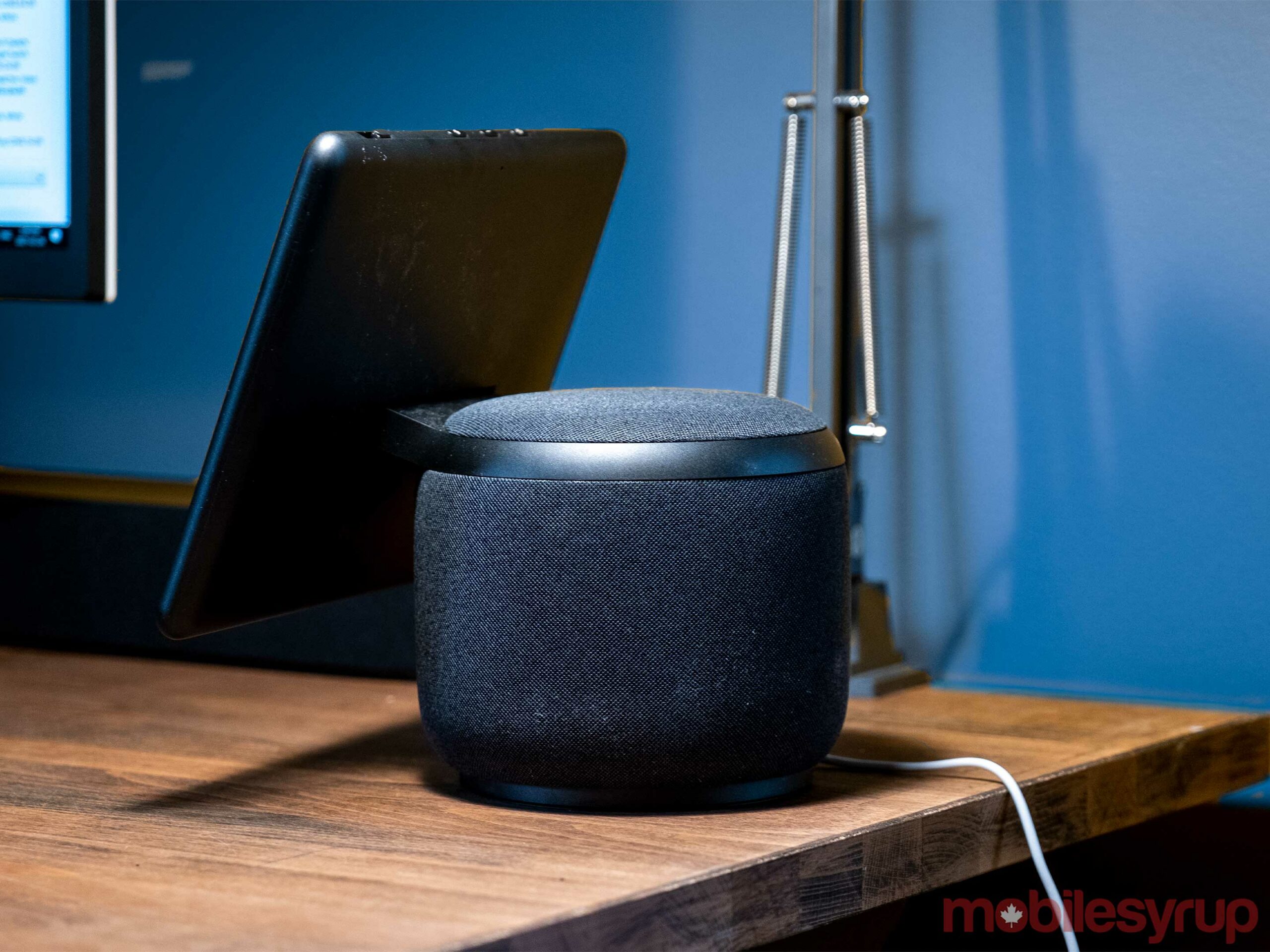 The Echo Show 10 is attached to a cylindrical base that houses many of its main components and the speakers.

The speakers sound fine at loud volumes, which is weird since this device begs to be placed in a large room. The sound balance degrades at louder volumes (over roughly half) and tries to make up for that with overly loud bass. It’s still a decent speaker and most people will like how it sounds, but it’s not as clear as a 4th-gen Echo or a more expensive Sonos smart speaker.

It sounds a lot more balanced below half volume, and I usually listen to it at that volume since it’s still plenty loud and sounds quite balanced, it’s not perfect, but it’s easily usable.

There’s also Bluetooth and an excellent brushless motor that’s very quiet. While I might not be a huge fan of the rotating aspect of this machine in practice, the motor design and the hardware side of things is slick and works as advertised.

What about the other cool features? 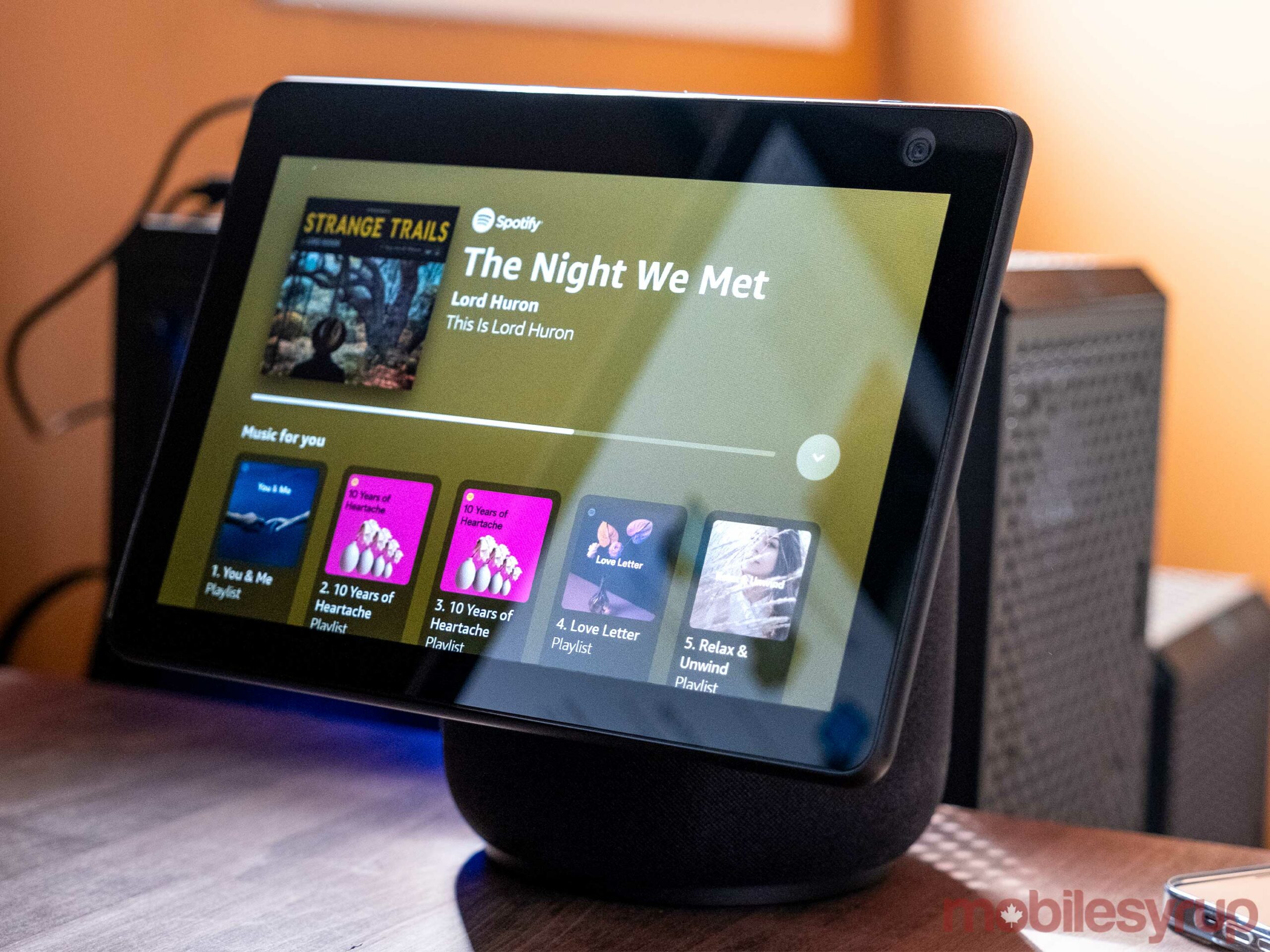 There are a lot of other features packed into the Echo Show, but they’re not things I use daily, weekly or even ever. They’re a little more niche, which is something to remember if you’re thinking about getting a smart display. Where do you think you’ll place it and will you interact with it more than a standard Echo speaker?

I’ve found that a large smart display on my living room mantle to control smart home devices and a small display in the kitchen so I can visually see cooking timers is how I enjoy using these types of products. You’re likely different, but it’s worth thinking about it before dropping over $300 on a smart display like this.

That said, having the Echo Show 10, in particular, does open up several useful features. You can video chat with it and since the device can pivot, it follows you to make sure you’re always in the frame. On top of that, the 13-megapixel webcam can also pan and zoom like Facebook’s Portal devices. This is a pretty great feature, but it really only works in large rooms like a big kitchen or living room where the device can actually follow you.

When testing this feature, I just find myself sitting statically, which works just as well on a smartphone. However, if you make a lot of video calls while cooking though, the Echo Show 10 for you. 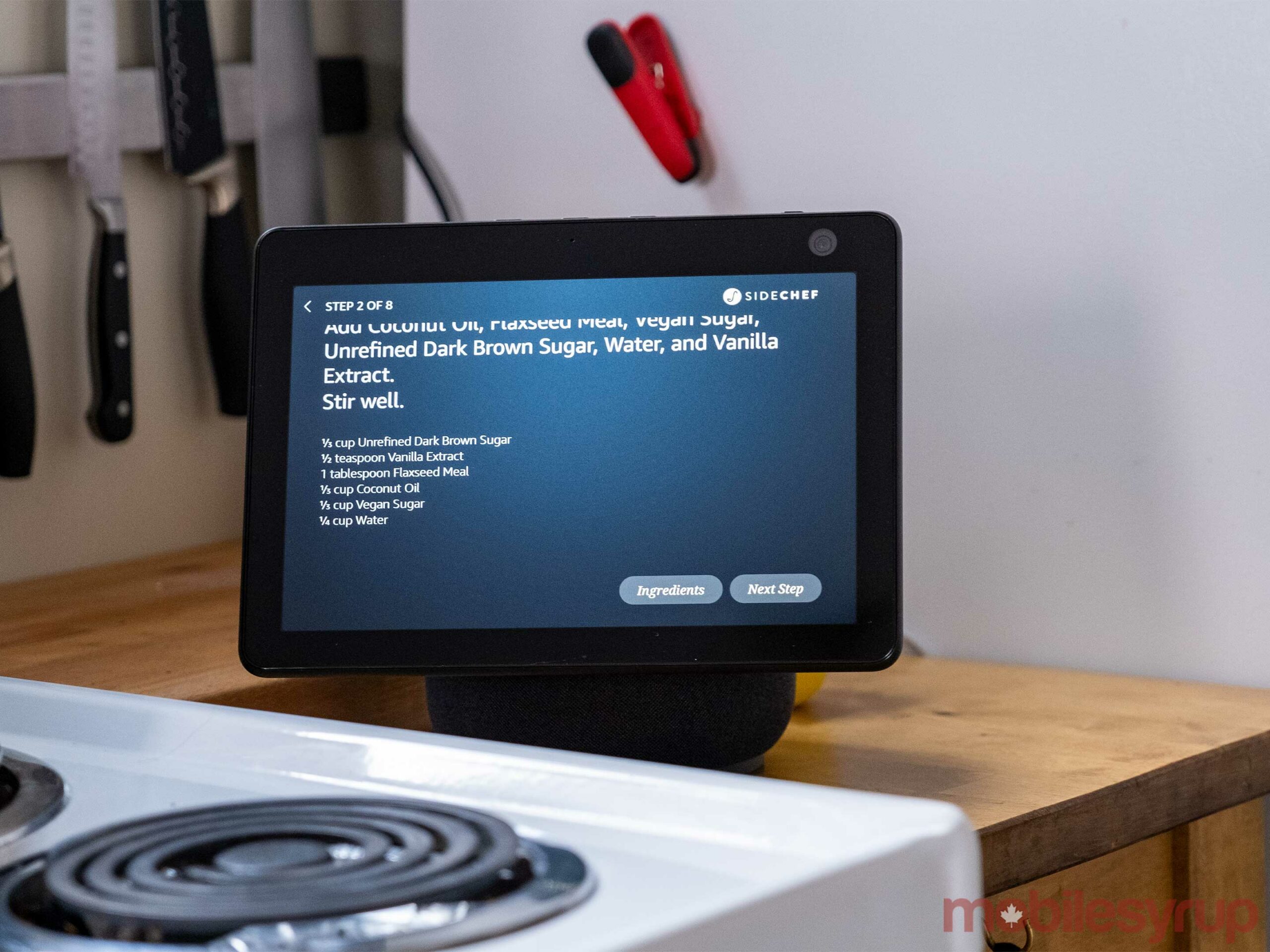 The front-facing camera also allows the Echo Show 10 to work as a security camera because it can spin around in a room to give you a wide view of its surroundings, but this only works if you have the Echo in a suitable spot.

Would I buy this device just for this functionality? Probably not, but maybe if I was a pet owner who wanted to check in on my dogs or birds or something while I’m at work, I could get something out of it. That said, there are also other standalone devices that do this.

“Sometimes it’s hard to shoehorn larger and more expensive tech items like this into your life.”

You can also use it to watch content on Netflix, Prime Video or a few other streaming services, but YouTube still isn’t supported natively, which is the type of short-form content I like to have on when I’m cooking or cleaning. You can watch stuff via the YouTube site using the built-in web browser, but it’s not very streamlined and is pretty wonky.

Beyond that, Amazon has a collaboration with SideChef and some other cooking sites and platforms. On the Echo Show 10, this functionality works well, and the layout of these recipes is easy to read. Since the Echo follows you around, you can see your next step from anywhere, which is a nice touch.

A swing and a miss 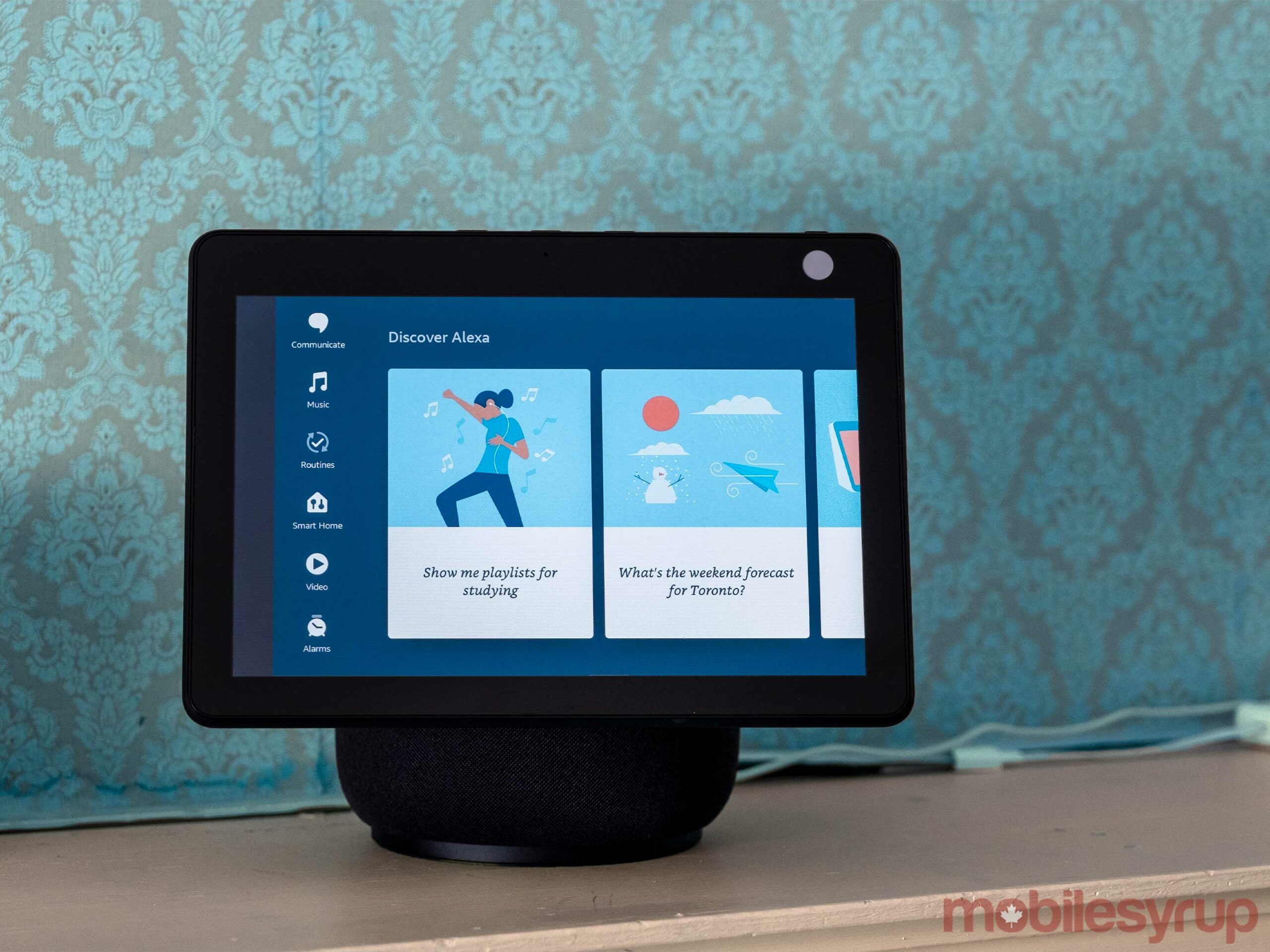 When it comes down to it, the Echo Show 10 is a solid, if not fantastic smart display. You can watch content on it, look at photos and even learn to cook. It also is a great video chatting experience, a decent speaker and a place to control all your smart home products.

That said, you really need to think hard if this is something that will make your life easier. Sometimes it’s hard to shoehorn larger and more expensive tech items like this into your life. If you make a lot of video calls from your kitchen (and you have a large kitchen) the Echo Show 10 will add a lot to your life. Even someone with a large open space kitchen/living room area will likely enjoy it as well. If you need a smart device to set timers and ask quick facts, this isn’t for you and some cheaper smart displays will likely make you just as happy.

I’m still a bigger fan of Google’s smart displays as well. For example, Google makes it easier to adjust smart lights with touch. You can turn the brightness up or down on Amazon’s system, but you can’t change colour temperature, which is annoying. If the spinning base isn’t going to add anything to your life, I’d recommend a Google smart display instead.

I get the most use out of my smart displays when I put one on top of my mantle in the living room. Something about not having to bend over to use it makes me want to interact with it a lot more. In that vein, keeping the Echo Show 10 on a countertop instead of a side table to something out of your natural paths in your home should help you use it more.