The design overshadows the upgrades 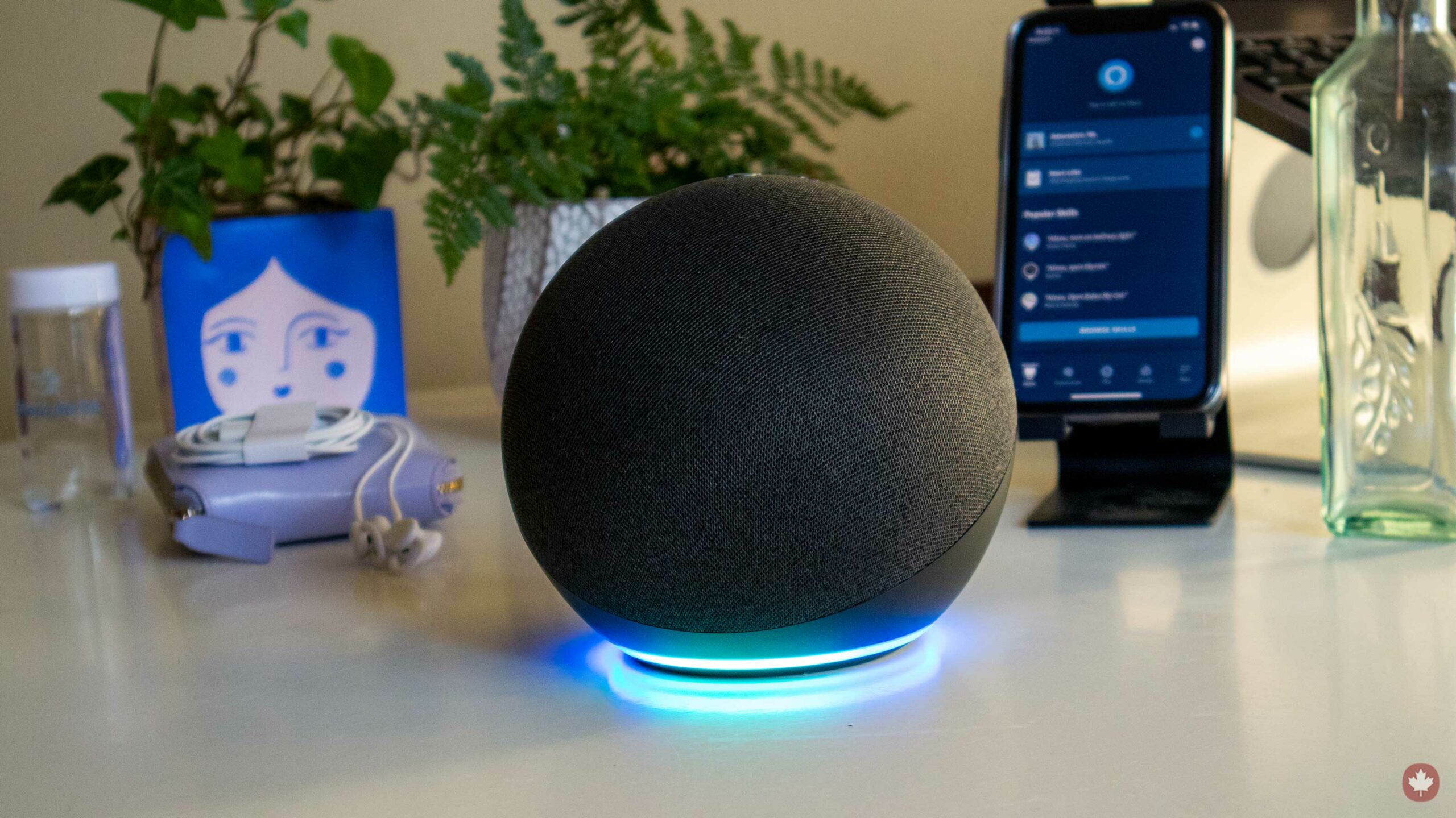 It basically includes the feature set of last year’s Echo Plus packed into a spherical body and priced at the standard Echo’s $129 price tag.

In fact, Amazon also revamped the Echo Dot in the same way, but at least it’s still selling the old puck-shaped Dot and Dot with Clock for people who aren’t looking for a large smart speaker.

There’s still no denying that the new Echo is a great smart speaker. That said, the unique design craves more attention than last year’s Echo, which in my mind, is a step back, especially after the company came so close to perfection with the Echo Dot with Clock.

“Magic eight ball, is this a good design?” 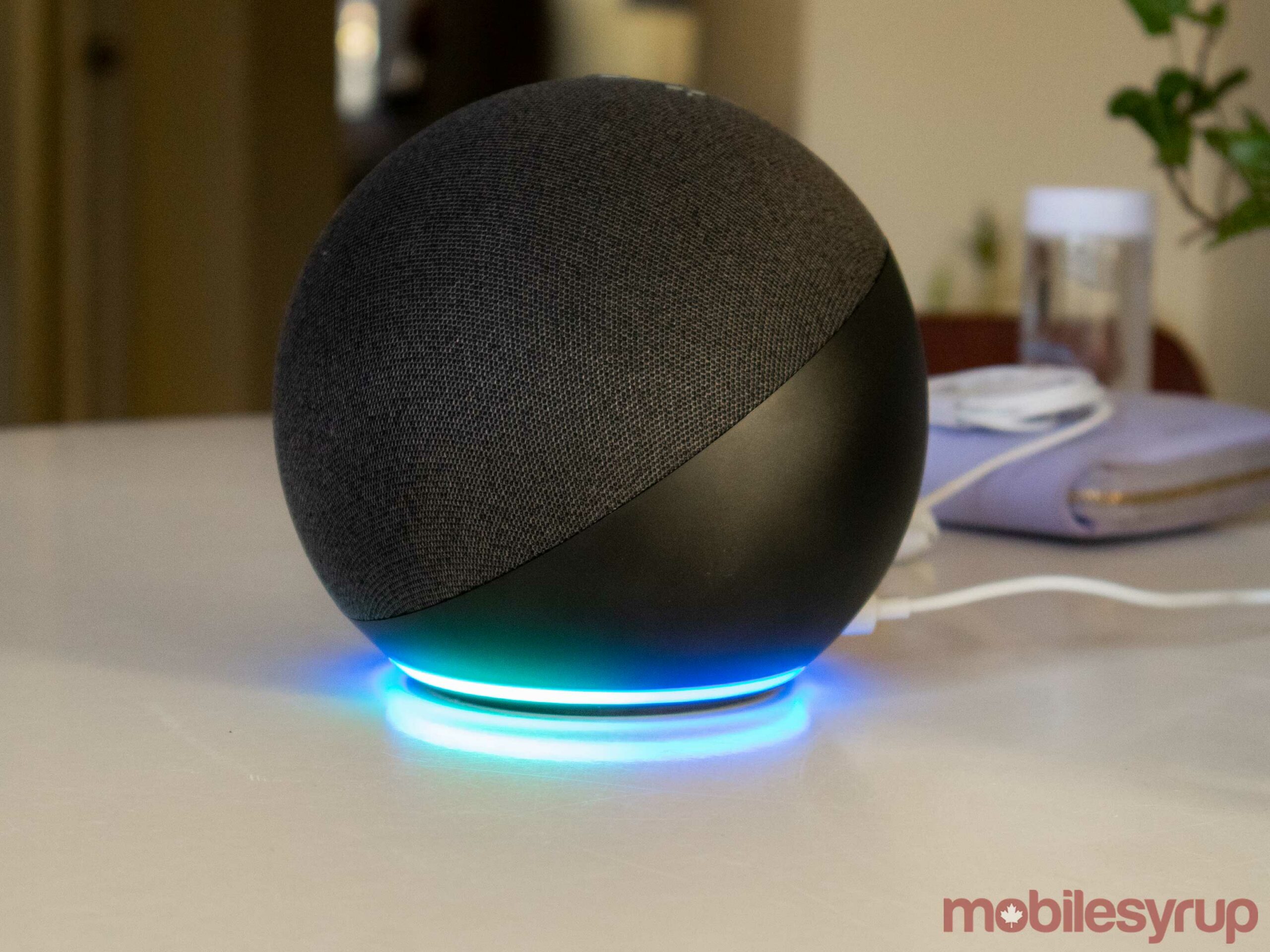 Before I get into the technical side of things, I’ll address the new design. As you may have already guessed, I’m not fond of it.

I understand that it stands out this year, making it look nice on a shelf or on a TV stand. However, I also believe that smart tech should blend into your home more than attract attention. Unfortunately, this new orb-shaped Echo doesn’t entirely line up with that thought process.

Amazon sent me the ‘Charcoal’ version of the new Echo. Overall, the design reminds me of a magic eight ball. This makes me always want to pick it up and shake it when I walk past it, which is a weird urge to have towards a smart speaker. If you don’t want it in black, Amazon’s blue shade is called ‘Twilight Blue’ and the white version is ‘Glacier White.’

Even though I’m not the round Eco’s biggest fan, I will admit that there’s a retro-tech flair to this design that’s pretty appealing. However, as I said before, I’m still not sure that building flashy smart speakers best suits their real purpose.

Devices like the Fire TV Cube and Google’s Nest Wi-Fi are other good examples of my ideal smart speaker implementations. When companies add smart-speaker capabilities to other ambient devices around the house, it makes sense. If I already need a smart TV box plugged in all the time, I shouldn’t also need another ambient device right beside it. 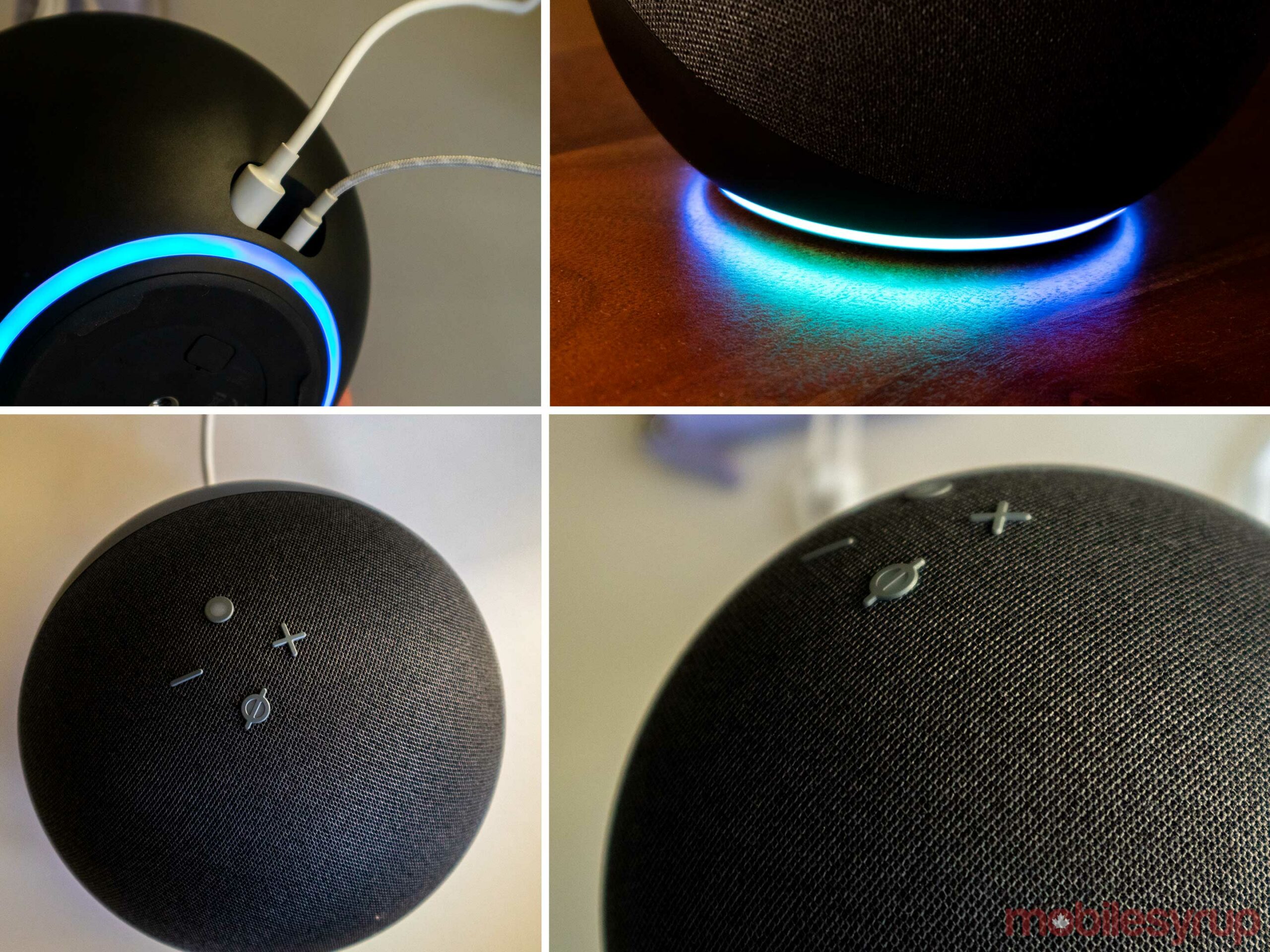 This time, the only cool design trick is that the light ring on the bottom reflects off whatever surface it’s sitting on, giving off a cool glow around the device when you look at it from certain angles.

Some might feel like I’m placing too much emphasis on the new Echo’s design. However, if people are going to place these all over their homes, something a little more inconspicuous like last year’s can-shaped Echo makes more sense.

“Sphere, sphere on the table, can you tell me you’re able?” 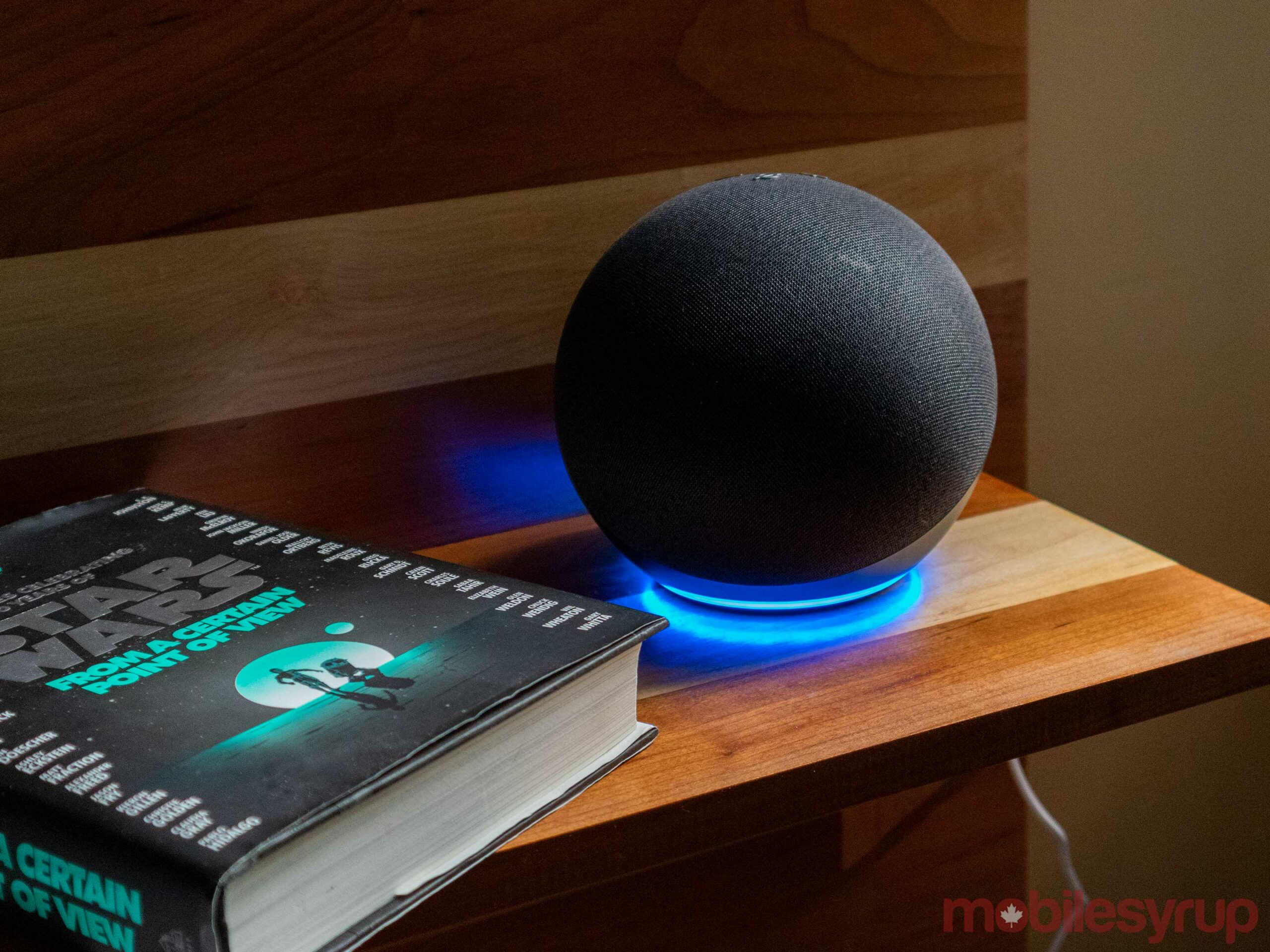 Beyond the new design, the main new feature is the Echo’s sound quality. The device includes three speakers this time around compared to the two in last year’s Echo.

There are two 20mm forward-facing tweeters and a 76.2mm upward-facing woofer. In practice, this is a nice upgrade and provides music with lots of bass that holds clarity at loud volumes quite well. If you want an Alexa device to play music or podcasts, this smart speaker works great for that.

You can hear the sound pretty decently around the device, but the main output is forward-facing, so you’ll likely want to place the new Echo with its back to a wall so the sound washes over your full room evenly. This is a departure from the unique ‘360-degree Omni-directional’ sound that the previous Echo used. 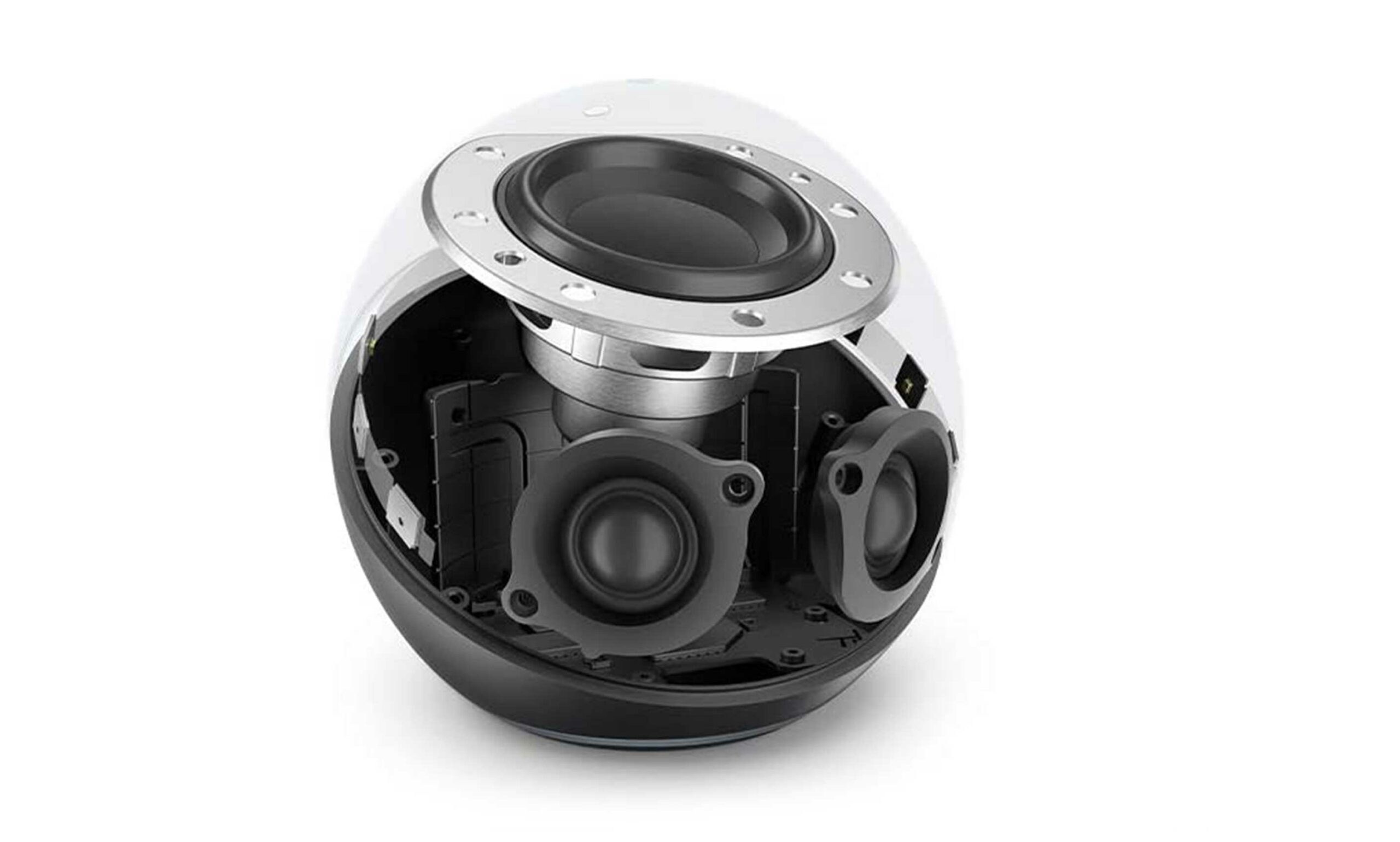 This is a bit weird because the design begs to be placed where it can be seen, but its speaker array says, “place me in a corner with my back to the wall.” This is the same type of design that Google went with for its new Nest Audio, so maybe there is some data to back this design choice up. When listening to the competing speakers side-by-side they’re very comparable with the only clear distinction being that the Echo is more bass-heavy. Stay tuned to MobileSyrup for a more in-depth comparison between the two smart speakers in the coming weeks.

Amazon says that the new Echo can adapt its sound profile to suit any room. I was able to test this by moving it in and out of my TV stand. There seemed to be a slight drop in bass output when it was enclosed inside the stand. This makes sense since the vibrations caused by placing the speaker in a tiny space made up for the speaker’s reduced bass output.

Overall, my issues shouldn’t be taken to heart. If you love the design, and I know a few people that do, the speaker is more than loud enough for most reasonably sized rooms and has more precise sound than any Echo in the past. 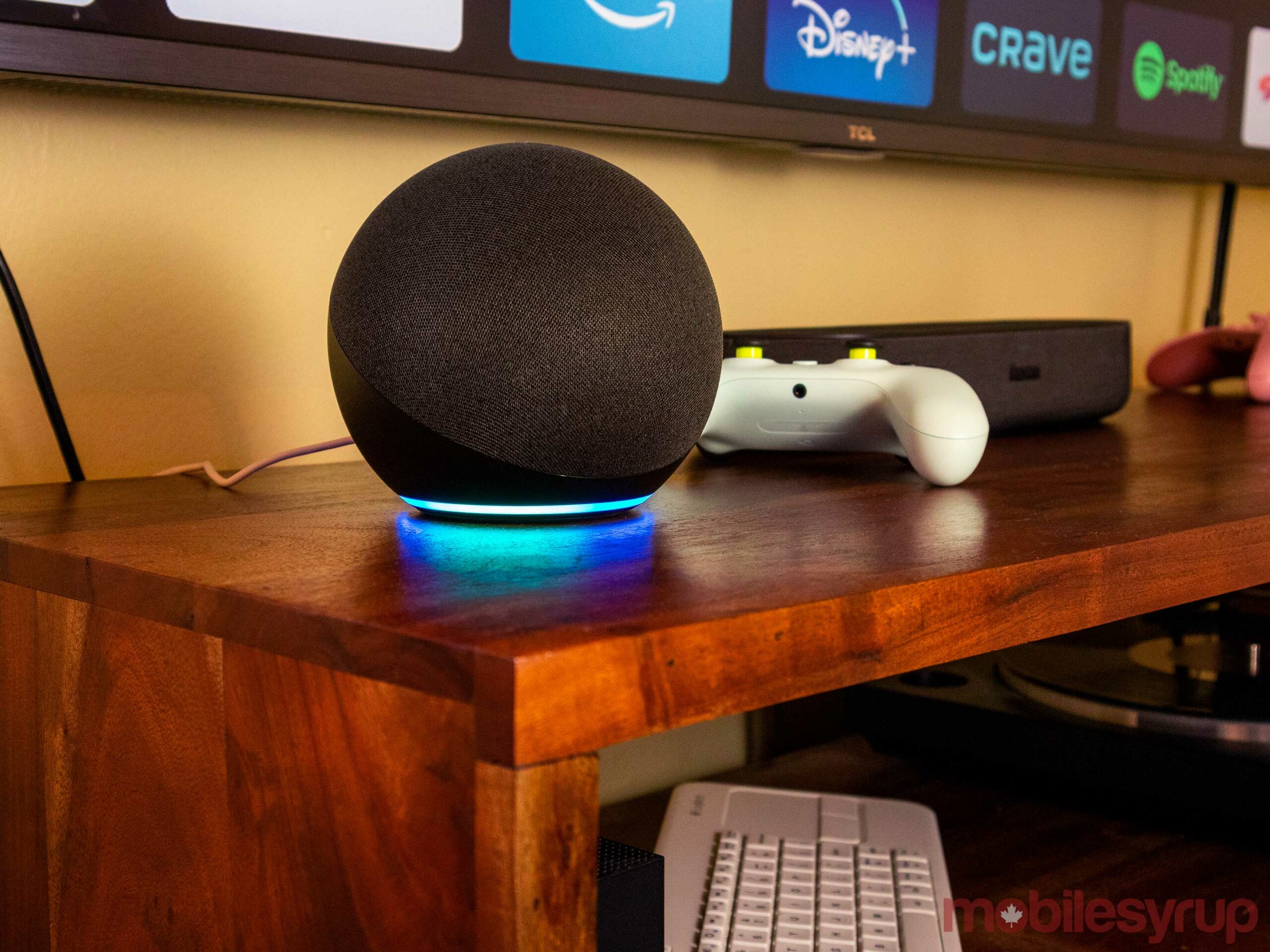 There is also a Zigbee smart home hub technology built into the new Echo to make connecting some smart devices a bit easier. However, this isn’t something that I used with any of my smart home products. Amazon also included an Aux jack on the rear of the device that works both ways so you can use the new Echo as a speaker for devices like record players and audio receivers. It’s important to point out that you need to enable the Echo to accept audio inputs from the Alexa app on your phone.

Amazon also implemented the tap to snooze functionality from the Echo Dot, which is a great addition to the device. There’s still no way to play/pause without using a voice command, which I’ve always found useful with Google’s smart speakers.

There is also a temperature sensor in each of the new Echos, allowing it to indicate the temperature of the room it’s placed in once it’s calibrated. Calibration can take up to 45-minutes according to Amazon’s support page. 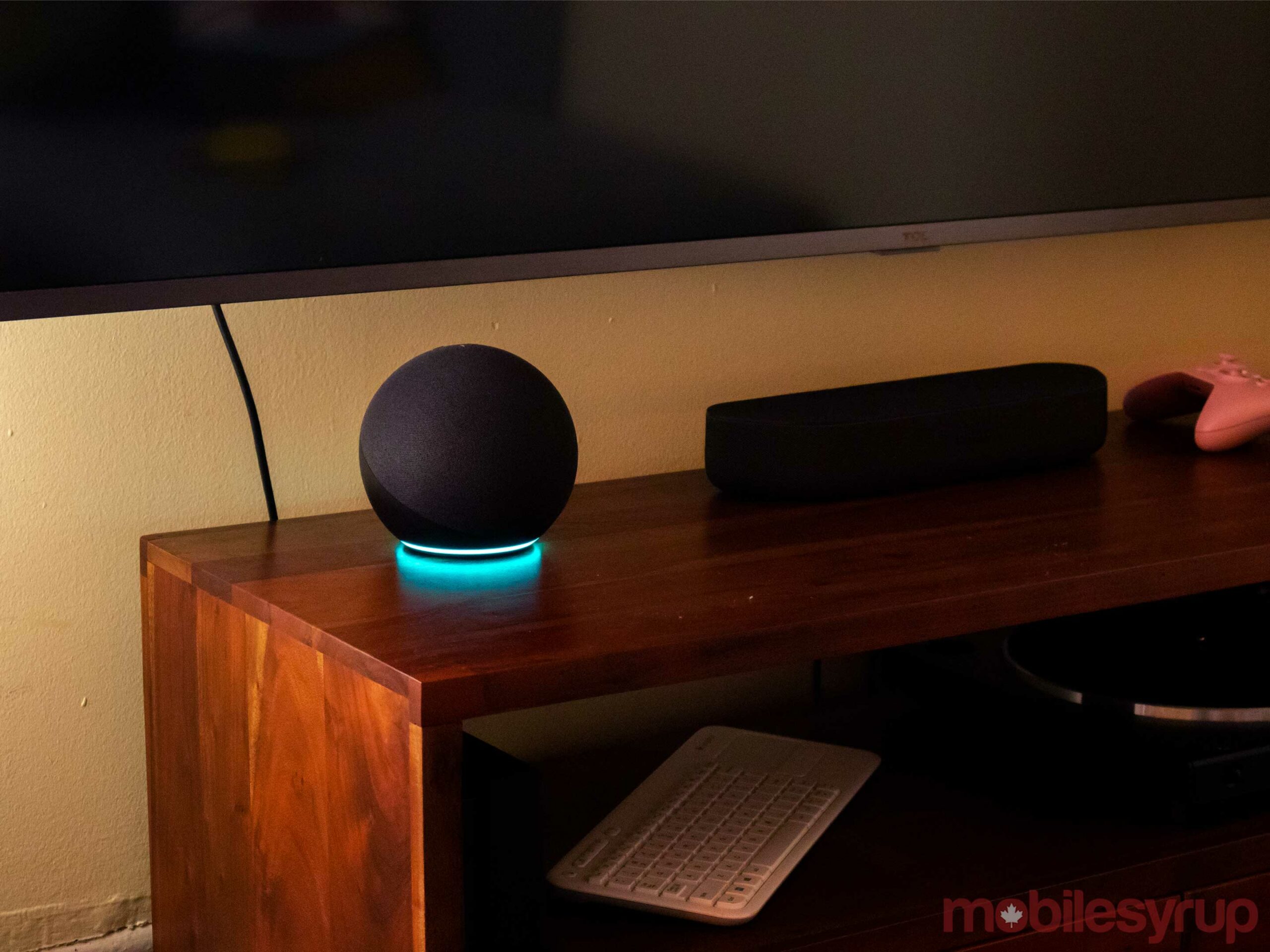 “Oh crystal ball, is the new Echo worth buying?”

When it comes down to it, there isn’t anything fundamentally wrong with the new Echo. It’s a reliable smart speaker packed into a reasonably compact shell.

My most significant issue with it is that last year’s Echo was super good too, and I would have rather Amazon continued selling that model for a reduced price. The effort to redesign the new Echo and add the new features doesn’t really bring much to the existing smart speaker’s capabilities.

If you’re still using an older first or second-generation Echo speaker, this is definitely worth the upgrade if you use it for a lot of music since the speakers are excellent now. Other than that, there isn’t anything here that I would consider a must-buy addition to the new Echo.

Even then, if you already have an older Alexa-enabled device that still works but has subpar speakers, you may be better off buying the Sonos X Ikea Symfonisk speaker and pairing it with your voice assistant. While Sonos’ ecosystem might be a lot pricier than Amazon’s offerings, it features vastly superior sound.

The new fourth-generation Echo retails is available now for $129 CAD, but Amazon’s hardware often goes on sale, so it’s likely worth waiting for a deal.

"When it comes down to it, there isn’t anything fundamentally wrong with the new Echo"