Facebook Portal Review (2019): The smart display for your mom

This digital picture frame makes new memories, as much as it shows the old ones 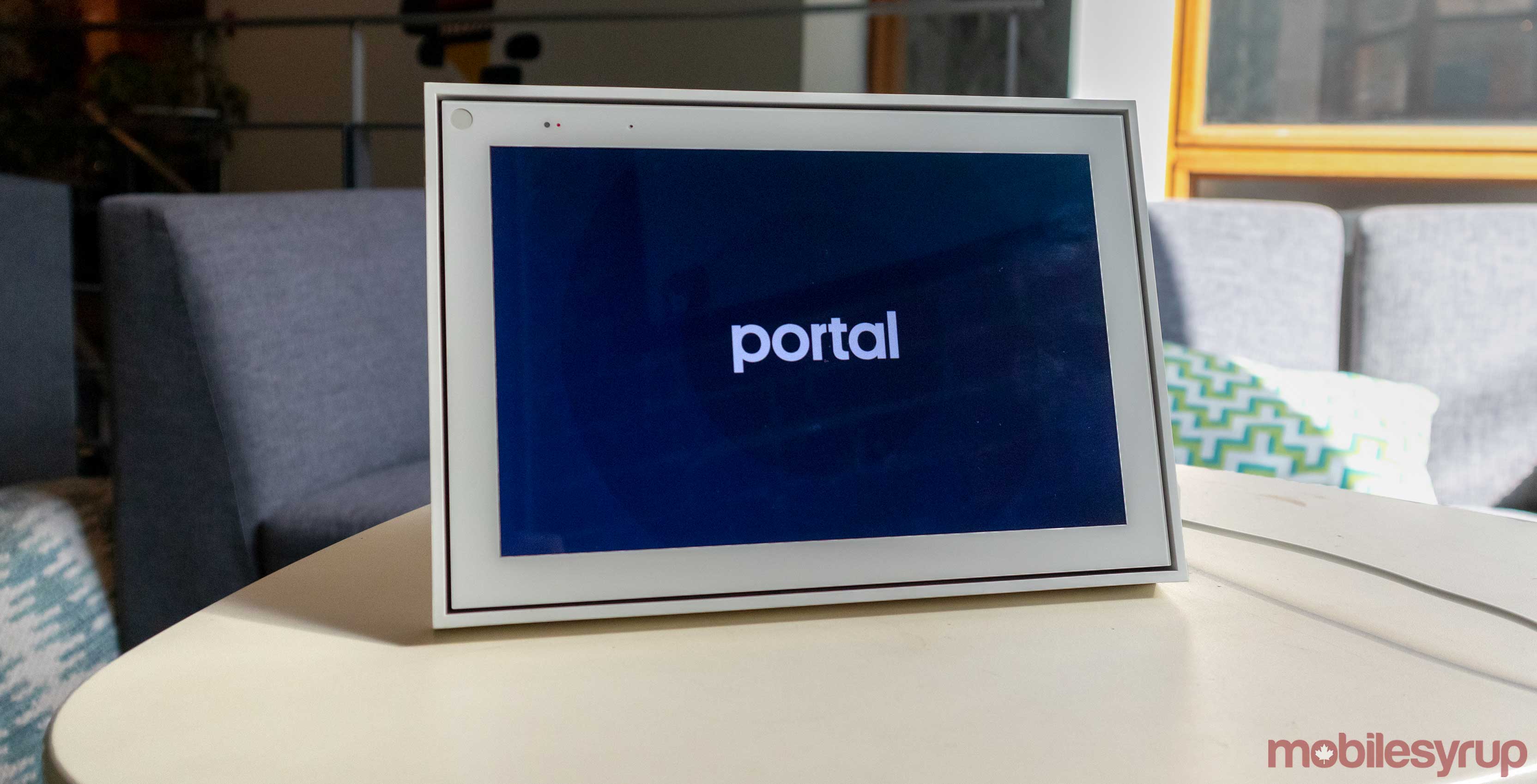 I wanted to love Facebook’s Portal more than any other smart display I’ve tried, but so far, it hasn’t hit home for me.

That’s not to say this expensive smart display doesn’t feature redeeming qualities. But for $250 CAD, I think I’d have a hard time justifying buying one. For someone else, it just might be the perfect smart display.

The Portal series of smart displays are great for the non-techie who you’re trying to drag into the modern, voice-controlled world.

For instance, I’d never try to convince my grandparents or mom to get a smart display from Google or Amazon, but every time I used the Portal to call someone on Facebook, it made me think, “this would be perfect for staying in touch with mom.” 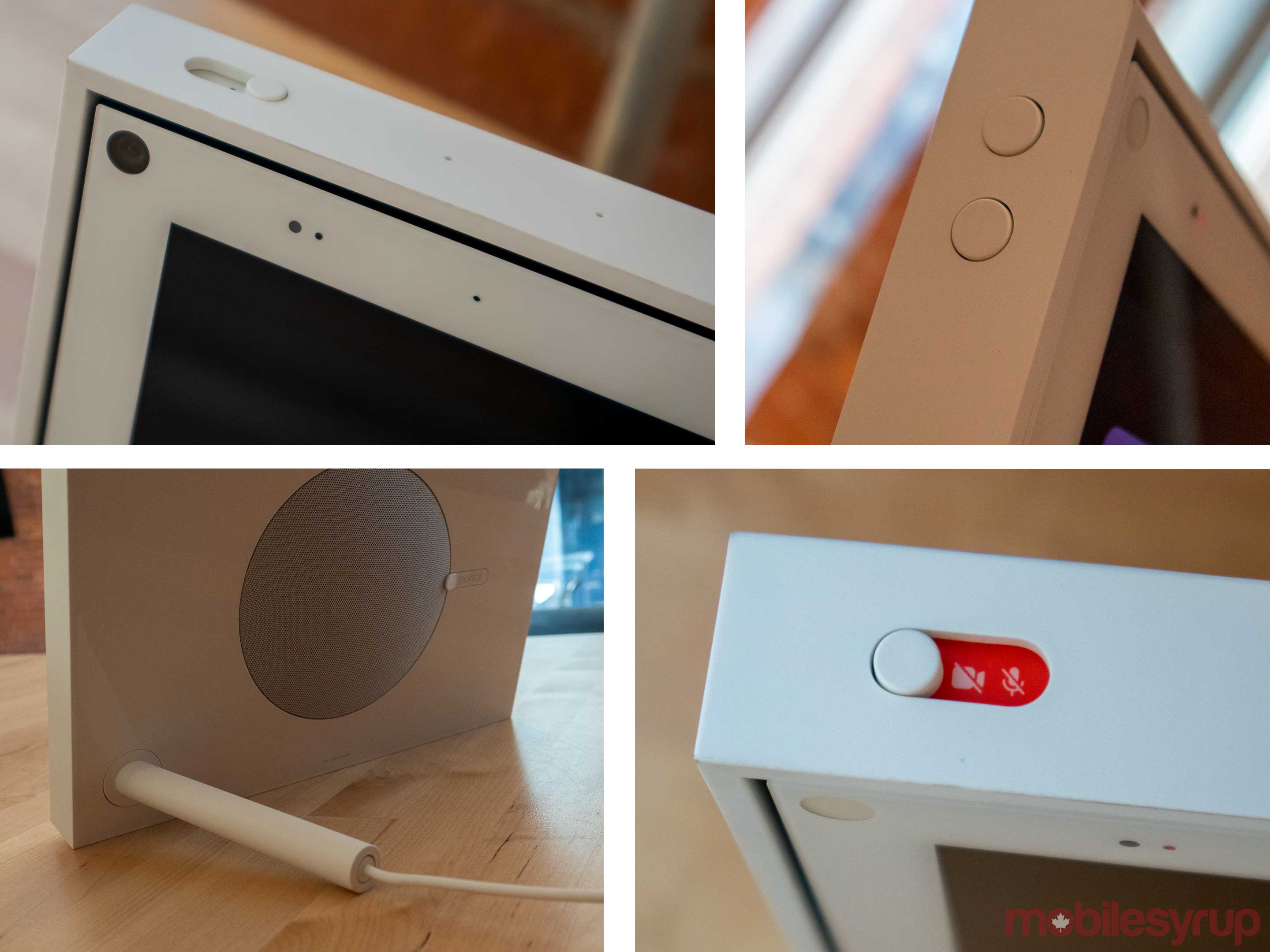 First off, I know design is subjective, but Facebook absolutely nailed the Portal’s appearance. There are a few weird aspects, like its stand/power connector, but set this device up on a counter or shelf, and it just fades into your room like a picture frame.

The model I reviewed featured a sharp, bright white design, but users can also get it in black if that suits your room instead.

The Portal features a large 10-inch HD display with a 1280 x 800 resolution, which is perfect for its intended use-case. Text is readable and colours look fine. While the display could be crisper, I don’t think people will generally stand close enough to the device to notice.

It also includes a few speakers. There’s a large unit installed on the back that gives the device most of its power, especially when it’s playing music. To supplement this, and help with directional audio when you’re making a video call, there are small left and right channel speakers that boom out of the edges of the frame toward the user. In use, these are decent and work well. They even get loud enough to fill large rooms.

I wish Facebook would have made it possible to wall-mount the Portal like the new Nest Speaker. I’m not sure how many people would do this since it needs to be plugged in and a wire would dangle down, but the option would be nice.

Before I move on, I should say that while I think running the power cord through the single stand leg was an interesting choice, It makes it harder to push the device against a wall.

Overall, the Portal features a great design that straddles the line between a tech device and home-lifestyle product.

A video calling device with Alexa on the side 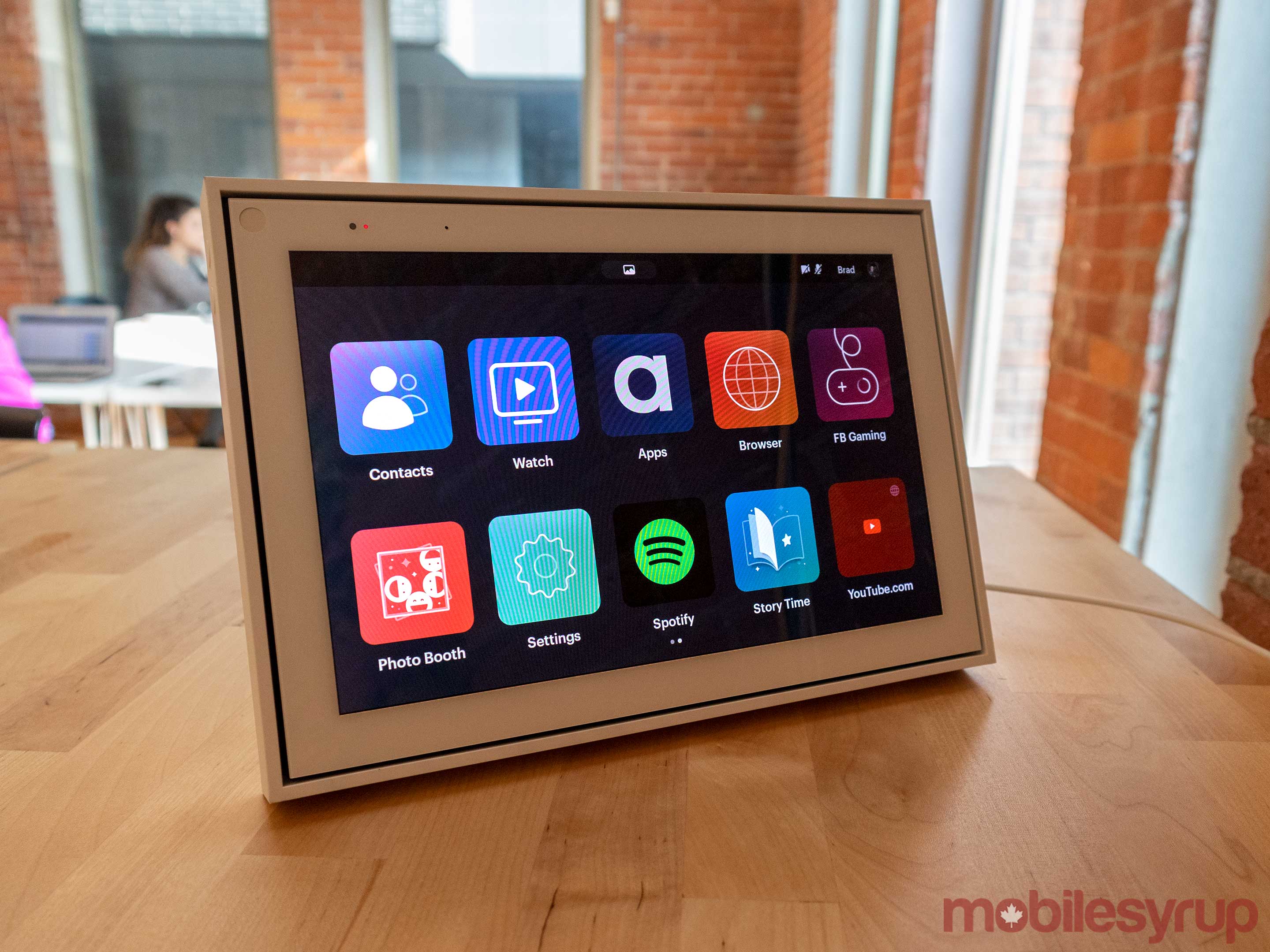 Facebook created smart camera technology that follows the user around the room as they move and put it in the Portal for video calls.

Depending on how far you’re standing from the camera, it can follow you for quite a few feet in either direction. However, the closer you are to the camera, the less it does this. If you’re not moving around and making a call alone, you can rotate the device into portrait mode. When the portal is oriented like this, it only frames one face.

To work alongside the moving camera, Portal also features a form of audio isolation. This means when you’re making a call, it will try to only pick up the voice of the person or people in the frame.

Users can also tap on someone’s face to lock onto them, which helps if you’re trying to talk and other people are moving around in the background.

You can even make calls with voice controls. Saying, “Hey Portal, call Scott” works perfectly. If you have more than one person in your friend list with that name, the device asks for confirmation.

Once you’re in a call, you can use Facebook Messenger’s augmented reality (AR) effects to have a little bit of fun by adding masks, hats and more to your call interface.

I should mention that you can also link your WhatsApp account and make calls via that Facebook-owned service as well.

You can group call with four people on WhatsApp and eight on Facebook Messenger, including yourself.

Beyond that, there’s also a picture frame mode that you can fill with pictures from your phone, Facebook or Instagram. This part works well, but it doesn’t crop photos and instead will show only one image at a time with letterboxing.

The final feature worth talking about is that the device also acts as an Alexa smart display. That means you can use Alexa to control smart home devices, set timers, play music and more. Although, it’s not perfect since it doesn’t show ambient information like an Echo Show or Google Assistant-enabled display.

The ambient information was something I missed at the start of my time with it, but since the Portal is positioned more as a digital picture frame, I didn’t mind it as much.

Other than that, it can do almost everything a regular Alexa smart display is capable of, minus a few things. Portal can’t play Prime Video, though the feature is supposedly coming later this year. It also can’t make video calls via Amazon’s service.

That means you can set timers, view the weather, play music hands-free and more. I’d say it’s not the perfect bedroom smart display, but it might be the ideal living room option.

Should you trust this in your home? 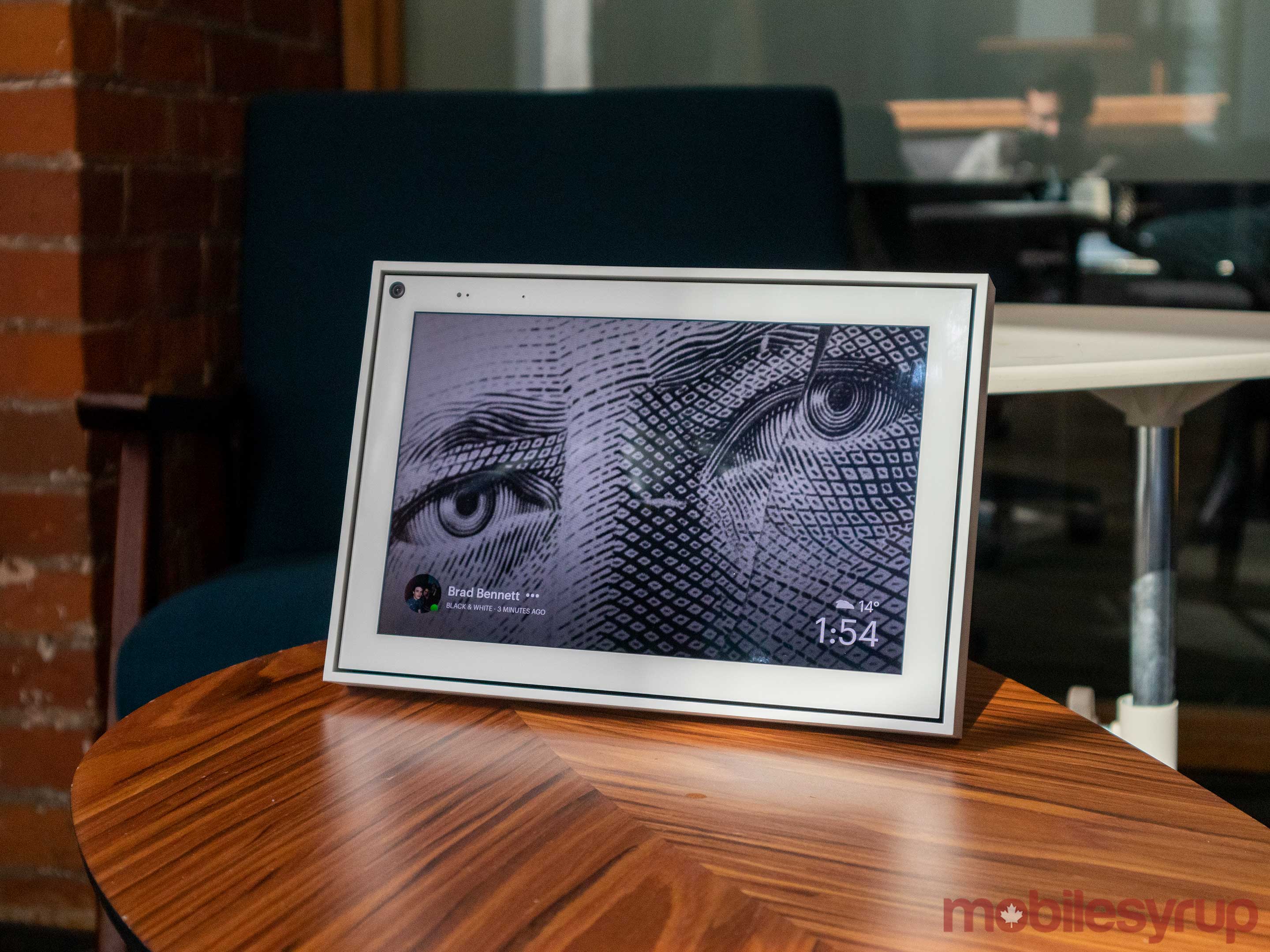 Facebook has worked hard to shed its anti-privacy reputation so people will trust putting a Portal in their home.

The first thing users will notice is that there is a slider on the top of the device that allows you to cover the camera with one click. Pushing it over also electronically disables the microphone so users don’t have to worry about it listening to them when they don’t want it to.

When the mic is muted, a red light is visible beside the camera that visually confirms Portal isn’t listening.

When the mic is on and you say, “Hey Portal” the display creates a recording and a computer-generated transcription of your interaction with the device. Facebook then stores these for up to three years so it can analyze them and make sure that the device is working correctly.

Alternatively, you can stop the device from recording your interactions in the Portal’s settings.

For comparison, Amazon keeps Alexa recordings forever unless you delete them manually. This includes Alexa conversations made on the Portal device.

Facebook also has two help pages detailing what it records, why, and how to delete it. The first page can be found here, and the more detailed page with in-depth links is available here. 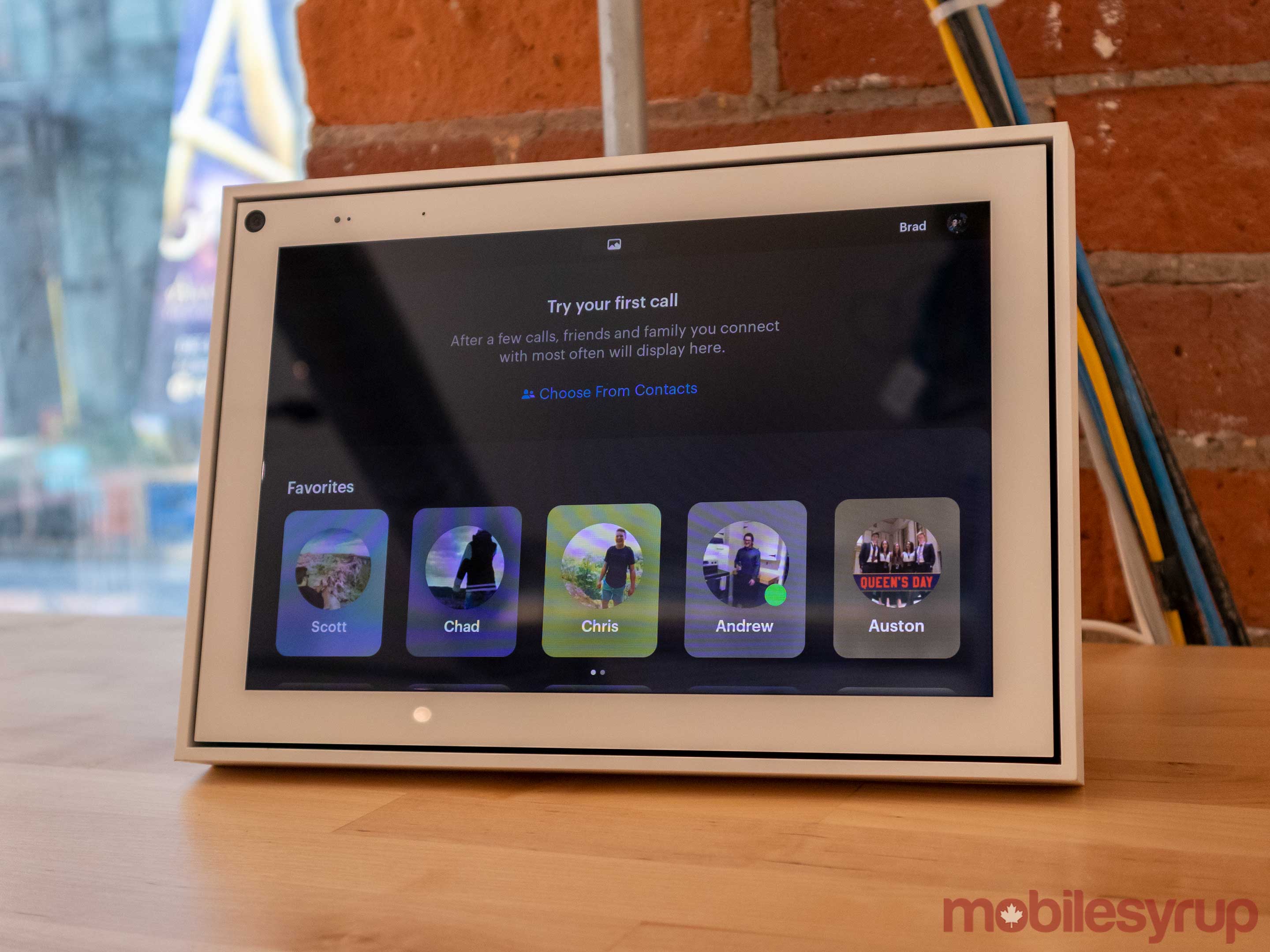 Who is this device for?

Facebook's Portal is perfect for someone like my grandparents or parents. It’s great for people who aren't tech-savvy, but would appreciate being able to see family photos rotate across their kitchen counter all day and make video calls with ease.

This device would even negate the classic grandparent video call move where you only see the top of their head since the device’s camera frames itself around their face.

Even though the Portal offers a lot of smart functionality, the added benefit of being able to play music, set timers and view the forecast are an extra value, but not the main reason to own this device.

This is where the main point of contention happens for Portal. It's not cheap like the Echo Show 5. Therefore, it's hard to buy for yourself and feel like you got a great value. That's why I see this as the perfect gift.

The Portal is a great product, but take stock of how you want to use a smart display before you buy the device. It's less of the perfect assistant and more of the ideal family communication tool.

You can buy the 10-inch Portal from Facebook from $249 CAD. The smaller Portal Mini costs $179 CAD and is exactly the same as the 10-inch sibling, but has an 8-inch display instead.

"The Portal is a great product, but take stock of how you want to use a smart display before you buy the device. It's less of the perfect assistant and more of the ideal family communication tool. "