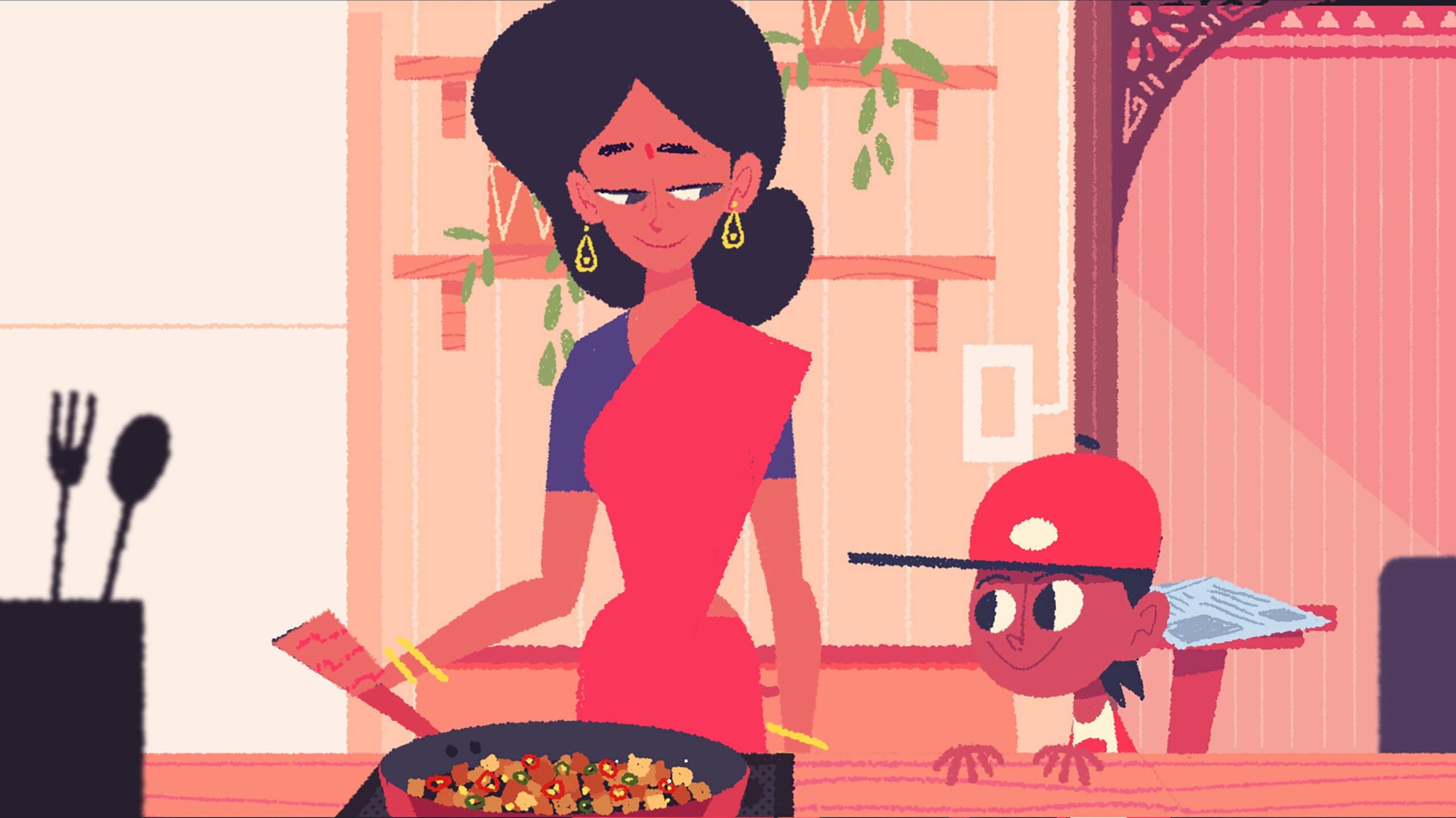 Some of the most popular video games are created in Canada.

Altogether, this has helped Canada become the third-largest producer of games in the world, with the national games industry contributing $4.5 billion to the country’s GDP annually.

With all of that in mind, MobileSyrup is kicking off a new series wherein we interview some of the country’s (many) talented game designers from both the AAA and indie space. When possible, we’ll also focus on women and/or BIPOC creators.

Of course, there’s more to gaming than just developers, so we’ll also spotlight journalists, advocates and other notable figures who are helping the industry thrive in Canada.

The Canadian video game industry is booming, and here are the people at the centre of it all.

Cooking games aren’t exactly known for having much in the way of narratives.

Whether it’s the easy-to-pick-up nature of Cooking Mama, the co-op-focused Overcooked! or the more realism-driven Cooking Simulator, the genre typically focuses on lighthearted, relaxing gameplay.

But for one Toronto game designer, a cooking game can be a way to tell deeper, more personal stories.

“The most interesting part of cooking for me is trying to understand the recipe — there’s a reason why the steps are the way they are,” says the lead designer of Visai Games, who goes by the online name Abhi.

For Abhi, those steps — both in their written form and what comes about for the chef as they follow them — are what’s most meaningful about cooking. His new game, Venba, follows an eponymous mother who immigrates to Canada from India with her husband and son in the ’80s. Through cooking mechanics, Abhi aims to convey the everyday challenges that come with such a life-changing move.

“Each level is a day in their life, and each day, something happens in the family that relates to the themes of the game. So you can see how the family grows and changes over time,” he explains. “And the dish they cook each day is not only thematically resonant, but there’s a logical reason for why they cook a certain dish on a certain day.”

It’s a story that draws from his own experience of coming to Canada from India with his whole family at the age of 12.

“It was sort of a funny environment because we didn’t have exposure to gaming media or any of those things,” he says of his earliest memories playing games. “Until I was eight, I played this ‘bootleg’ version of an NES console called ‘Terminator.’ But we didn’t know it was bootleg.”

That early fascination with games only grew exponentially once he came to Canada and saw how much more mainstream the medium was in the culture here. This ultimately led him to study computer science in an effort to make his own games. 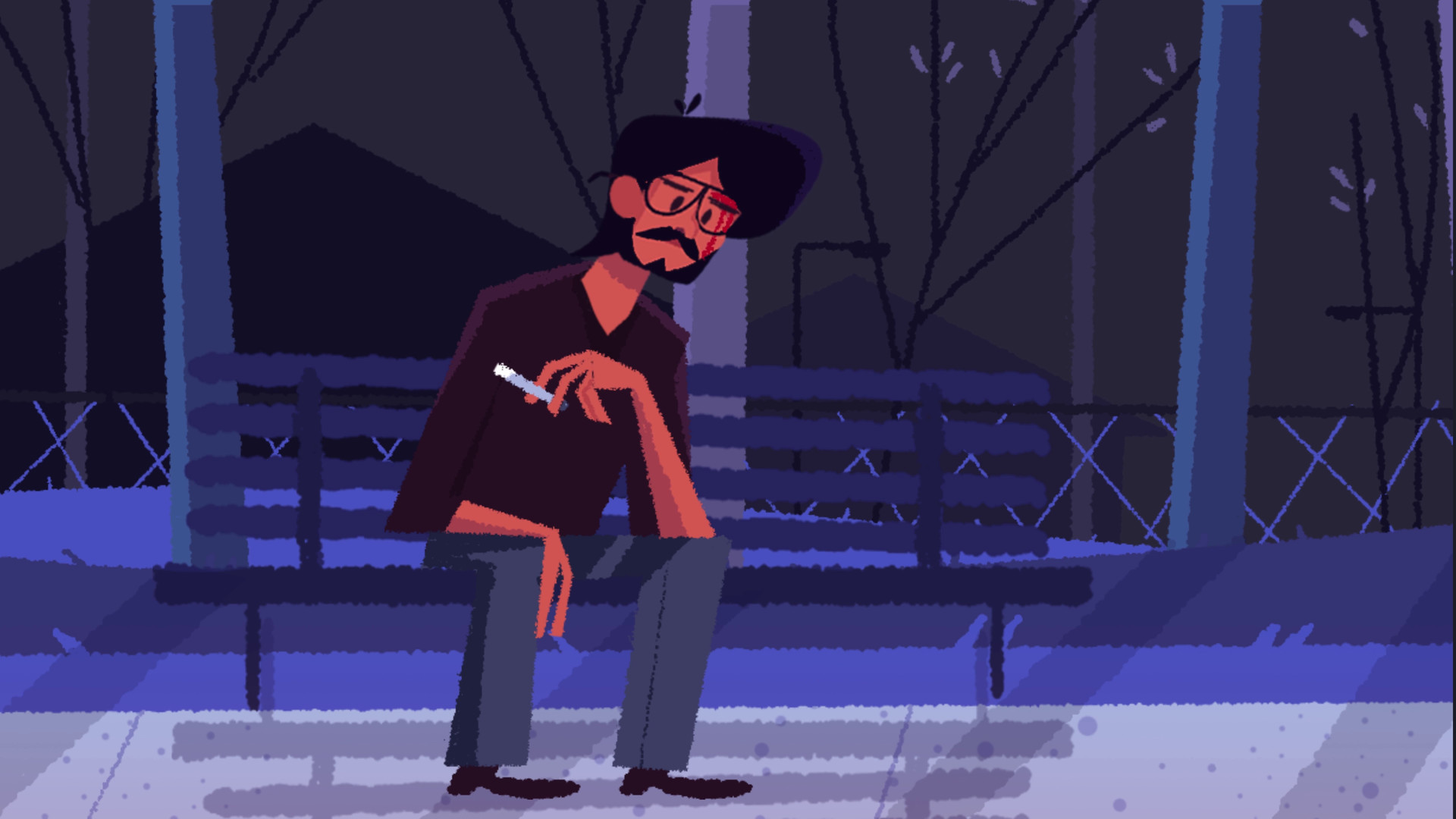 Since he moved to Canada, though, there were elements from both his own life and those of other immigrants that he kept coming back to, and so in early 2020, he started working on Venba with Indonesian artist Sam Elkana and a few part-time developers to tackle these very themes.

“I’ve always felt a little bit of guilt when it comes to, not just me, but how the kids of my generation treat the relationship they have with their parents,” he admits.

Now that he’s older, Abhi says he can truly sympathize with what parents like his have gone through.

“When my parents came [to Canada], they took a big risk coming here […] It’s hard enough to move where you’re 50 to a whole new different city and start a new life, because you know nobody there,” he says. “But it’s much harder when it’s a whole new culture. But they’re sort of taking that risk because they’re gambling that it’s a better life for their kids.” 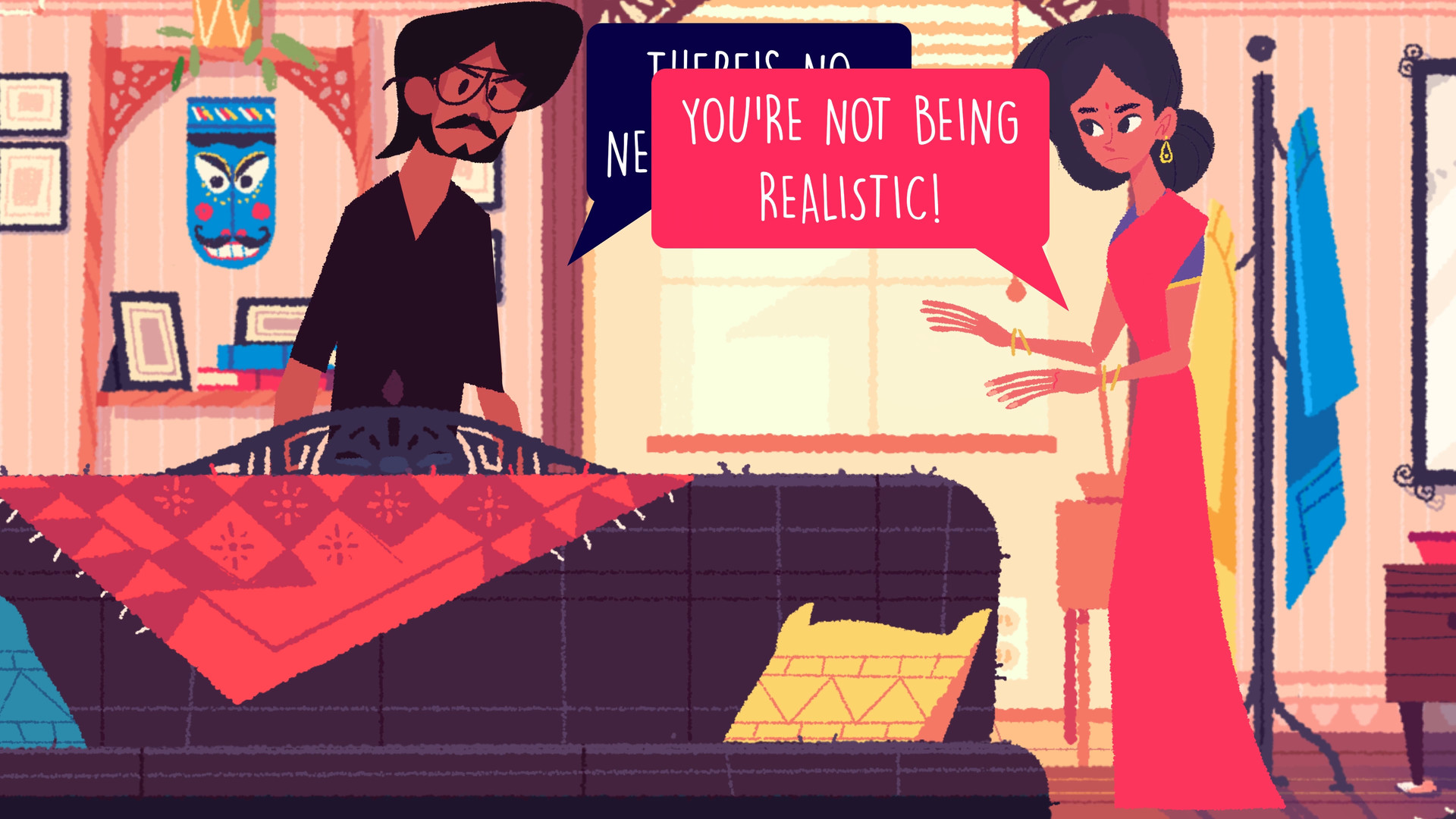 However, Abhi says he’s being careful to explore both sides of this cultural conflict.

“To me, it feels like the Eastern cultural values usually emphasize family, self-sacrifice, that kind of thing, and Western values emphasize the pursuit of happiness and taking responsibility for your own well-being. And I think both are really good value systems,” he explains. “The game is not really a comparison [between] both of them. But when your parents are from that Eastern world, and you’re growing up in this Western world, there’s sort of that ‘inequality’ in your relationship, and that’s what I thought was interesting to explore in a game.”

Venba also stands out for its emphasis on maternal relationships in an industry that is dominated by fatherly stories. Where the likes of The Last of Us, The Walking Dead, The Witcher 3: Wild Hunt and God of War (2018) focus on strong men trying to protect a younger (often female) person, Venba is all about an everyday Indo-Canadian mother.

Interestingly, though, Abhi says Venba wasn’t conceived as a conscious response to these trends, but rather, from an earnest desire to represent the women of his culture.

“It’s a lot different now, and it’s changing a lot now, but back in their time, there was a lot more pressure for the mothers’ entire identity to revolve around the children that they raised. It’s taken a long time to break those barriers and forge different identities,” says Abhi. “For the ones that grew up in that time, I felt for them. It’s especially unfair that they come here and lose that connection with their children. When I thought about that theme, a [lead] mother [character] made the most sense to start exploring it.” 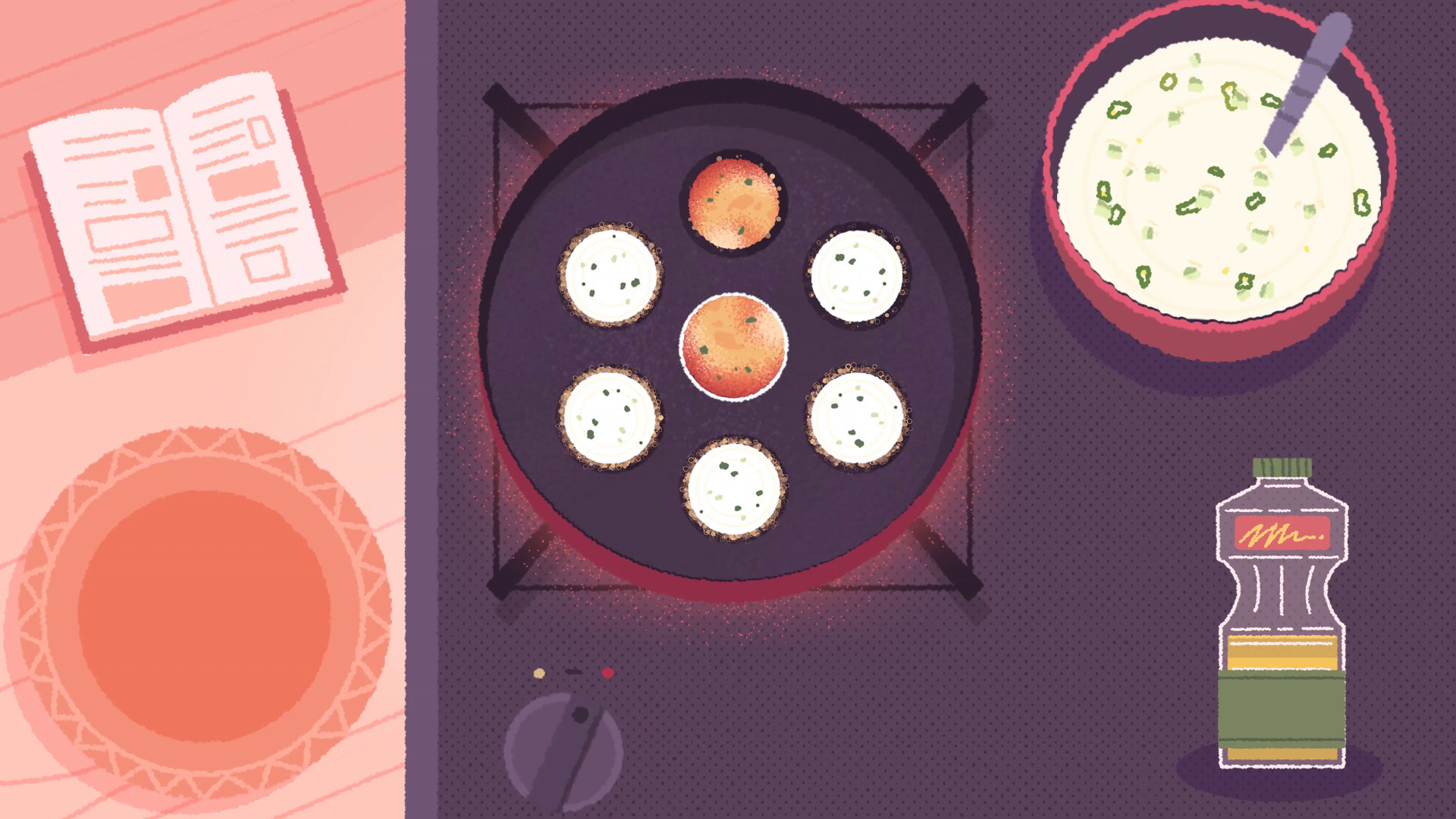 Throughout the game, Venba hopes to accomplish this through cooking.

“Venba brings a recipe book from home to Canada, and when she does, it gets damaged in the travel,” he notes. “So when the player cooks the recipes, they don’t see the entire recipe — parts of it are damaged and missing. They have to logically figure out what the missing parts are by interacting with the different elements [of the recipe].”

The process of restoring the lost recipes serves two main purposes: in addition to offering puzzle sections that players must solve, it also helps illustrate how Venba and her family reconnect with their culture.

“Loss can mean losing a loved one, but it could also mean losing your connections or loss of a language. The format of games really helps us show that,” says Abhi.

For example, he mentions that Venba and her husband’s dialogue is displayed in a different font and speed when they’re talking in Tamil versus when the child speaks in English. “I find that a lot of immigrant parents are so incredibly smart and talented people, but a lot of that is lost in that language barrier. So these are some nice ways to show that.” 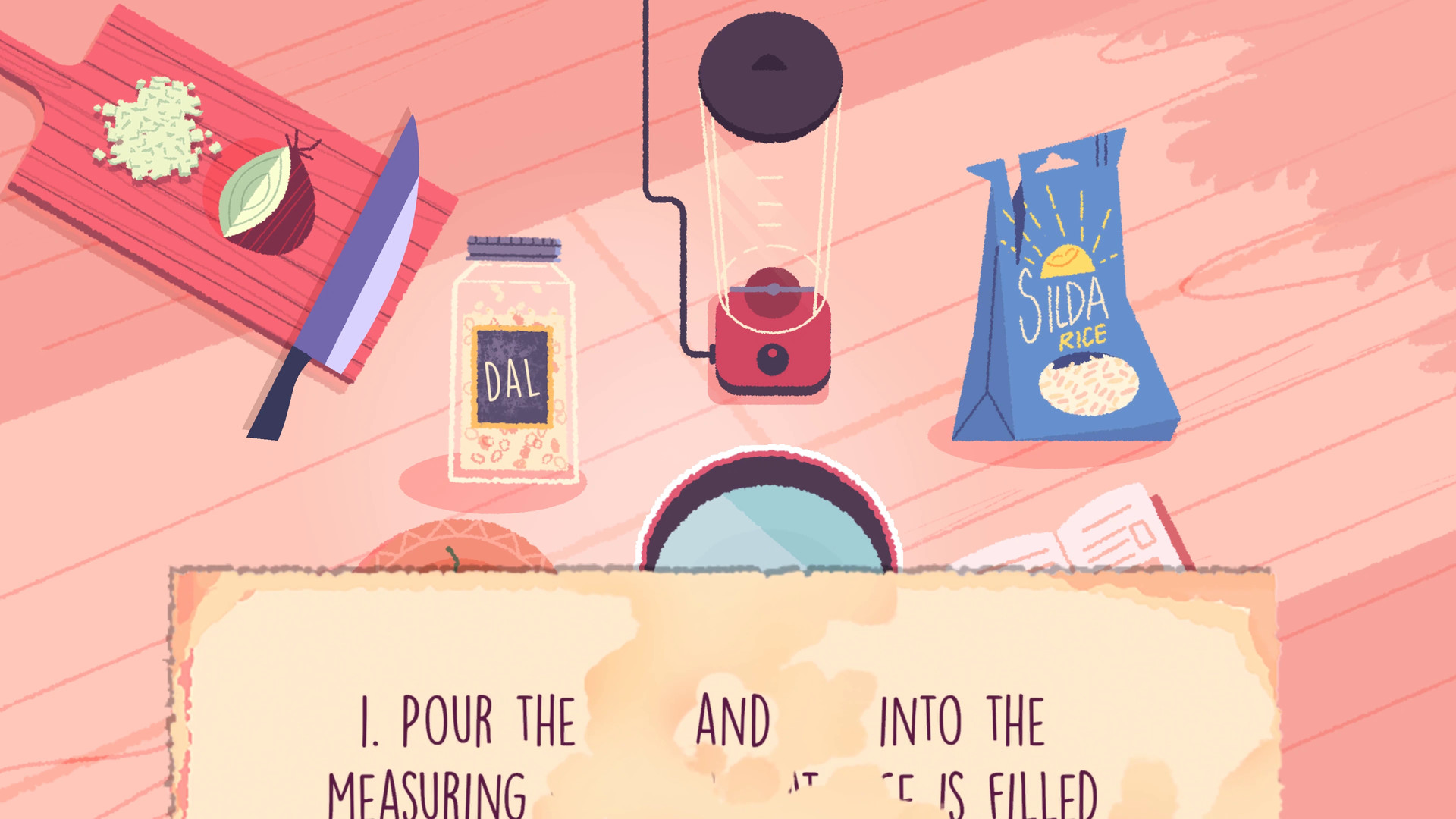 At the same time, Abhi says he’s working with an Indian chef to ensure that the cooking elements are accessible to newcomers while rewarding for those familiar with Indian cuisine.

“[One of] the biggest challenges for me was balancing it between players who know the food and the players who don’t know the food, and even more than that, players who cook and players who don’t cook,” he says. “But if I go the other route and make it too simple for people who are not immersed in cooking, then we sort of lose the authenticity. So [what] we’re settling on is that when you interact with the [ingredients] and the cooking devices, there are intrinsic puzzles that come from that. And that’s not exclusive to the recipe, or the food, but the gameplay interaction itself.”

Perhaps even less common than a game about a mother is one that’s focused on a South Asian character.

For that reason, Abhi admits that he wasn’t expecting the game to have much commercial potential as he was in the early planning phase. 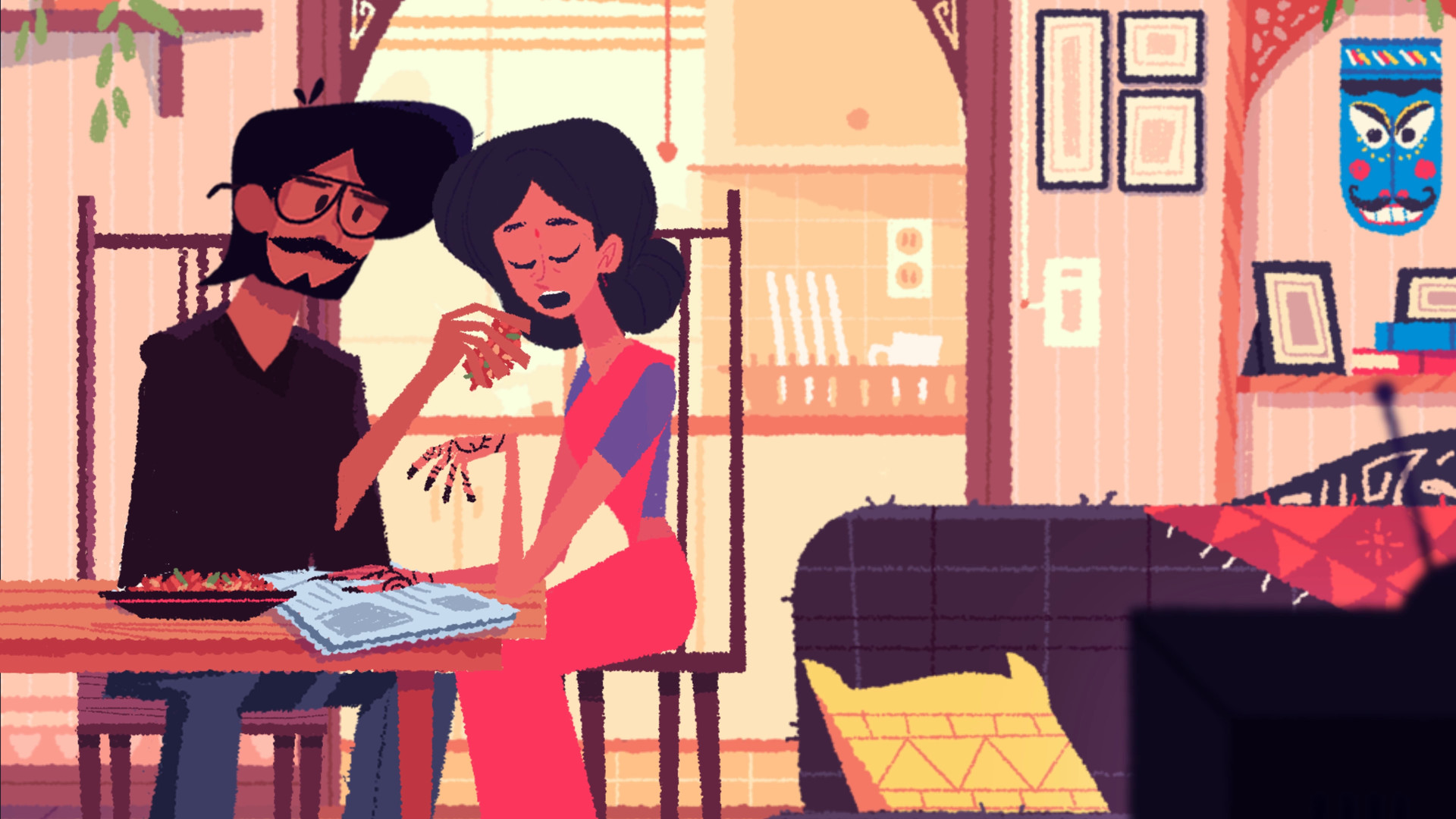 “When I first pitched this idea to Sam, we liked the idea so much that we [decided] to just make it and put it out there. And it didn’t matter if we sell zero copies — that was the notion that we had going into it,” says Abhi. “And I think part of me thought there isn’t an audience for these kinds of games. I was just confident that this game needed to be made for my own personal satisfaction if nothing else.”

But to his surprise, Venba garnered a great deal of attention when it was featured during Wholesome Games’ ‘Wholesome Snack: Holiday Edition’ showcase in December. Since then, the accompanying tweet from the official Venba Twitter account has received more than 11,000 likes and 3,800 comments, with numerous other enthusiastic quote tweets from gamers coming out in the following months. On the media side of the industry, Venba has also been featured in the likes of PC Gamer and Polygon.

Beyond that, Abhi gives a great deal of credit to indie developer Rami Ismail (formerly of Vlambeer) and Outerloop Games co-founder Chandana “Eka” Ekanayake (Falcon Age), who he says “really, really helped [him] out” in making and promoting Venba.

Their support was invaluable, says Abhi, because platforms such as theirs can help elevate lesser-known people of colour like him to enable them to tell their stories. 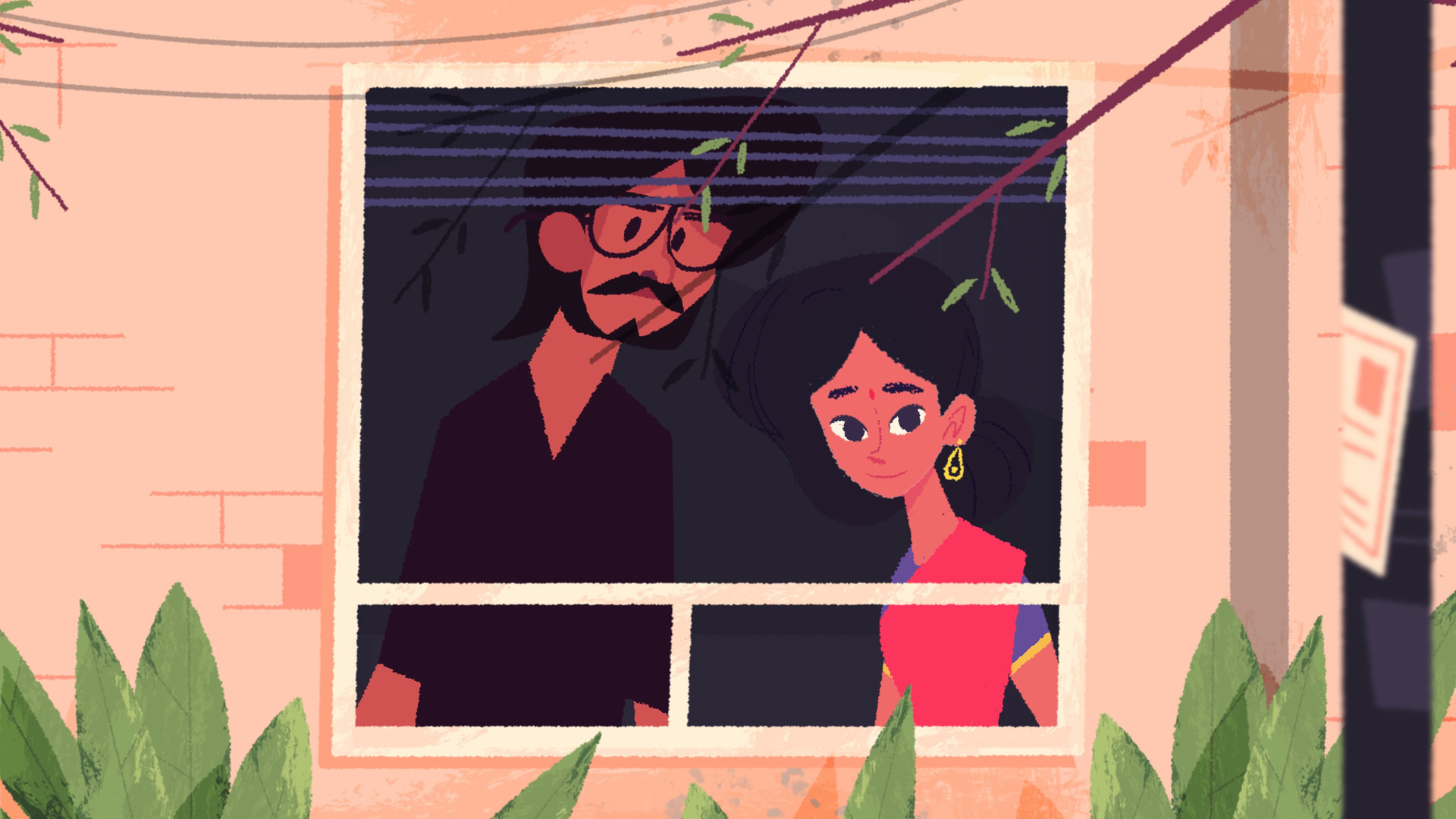 “The reception [to Venba] really showed me that there is an audience for these sort of games. And I wonder: if it was 10 years earlier and I had pitched the same idea, would I have gotten the same reception? So I do think that the reception that this game is a sort of a reminder of how far we’ve come, and I’m happy about that.”

Venba is set to release sometime in 2021 on PC. You can wishlist the game now on Steam. Abhi says he hopes to bring the game to mobile and Switch after its PC launch.